The top sponsorship - Platinum - comes with a host of perks, the stand-out being a VIP package for two to both the All-Ireland senior hurling and football finals which includes a round of golf at a top Irish course,  a four-night stay in the Westbury Hotel, and a fancy meal. Those who pay top dollar are also given prime location in the ballroom, tickets to the All-Stars, a GAA legend at their table, prominent signage at the event and a signed jersey from the hurling and football champions.

The next most expensive package comes in at $25,000, and gives those who pay it a VIP package at either the All-Ireland hurling or football finals.

The literature advertising the event spelled out what the money goes towards: 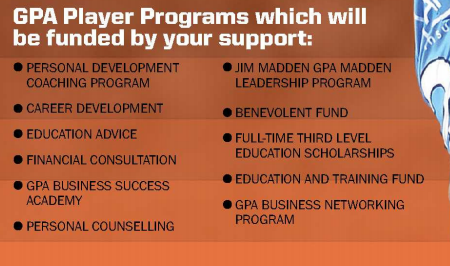 The GPA say they engage in fundraising to meet the "increased demand for services [of] the GPA". It was announced that the GPA would receive a grant of €6.9 million across a three-year period beginning in 2017. In addition, the GAA grant the GPA €2.5 million, or 15% of net central Commercial Revenue if that figure is higher.

The full details of the Boston event can be read here.

If you find a spare few grand down the back of your couch, you can buy tickets here.