How Rock And O'Connor Became Much More Than Free Takers

A constant feature of their recent success has been Dublin's drawing on the endless well that is external sports. Mark Ingle and Jason Sherlock brought basketball to their game. Jim Gavin was a keen student of American football. Earlier this year, Johnny Cooper took a trip to Sydney's GWS Giants to see how the AFL club conducts their business.

In 2017, Dean Rock arranged a session with Leinster and Ireland out-half Johnny Sexton. Watching over them both was renowned kicking guru Dave Alred.

"I think that is a bit like AFL. The reason AFL doesn’t improve drastically is that there is little external challenge. It is all within Australia. Gaelic is the same. Everybody knows everything. You are stuck in the convention of the game," Alred tells Balls.ie. 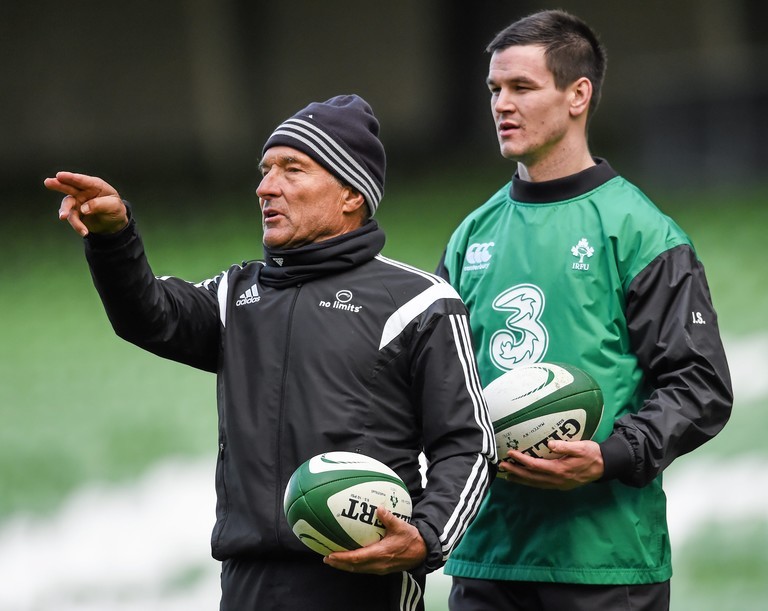 He is speaking from Brisbane where he is now based, working with clients like England’s George Ford, New Zealand's Beauden Barrett and golfer Francesco Molinari.

"Gaelic football, in particular, they tend to kick with their leg. I know that sounds really obvious. But their body tends to quit on the point of impact, and they hit across it. It is like a golfer always hitting a fade.

"All I say is, there is a better way of doing this. Let your body shift and be the main contributor, that is your power source. The leg is just an afterthought."

Alred worked with Dublin previously when they were managed by Tommy Lyons. For him, outside influences are a huge aid that more teams need to utilise.

"I am coaching golf. One of the things that has helped me most in golf has been coaching rugby. You can learn so much from different sports.

"In rugby, the spin is obvious because the ball is an oval. The spin tells you so much. In Gaelic, do people probably appreciate the spin? A backspin means you have a much truer hit than if you have a typical draw."

Rock forged a friendship with Sexton after they came across each other at various social functions and discussed their shared interest in placed ball kicking. When the Ireland captain mentioned his association with the man Johnny Wilkinson once hailed as a genius, Rock spotted an opportunity to polish up his skills.

Not that they needed much polishing. During Dublin's five in a row, Rock's placed ball accuracy stood at 86%. This is in line with this team's calibration; excellence is the default mode. 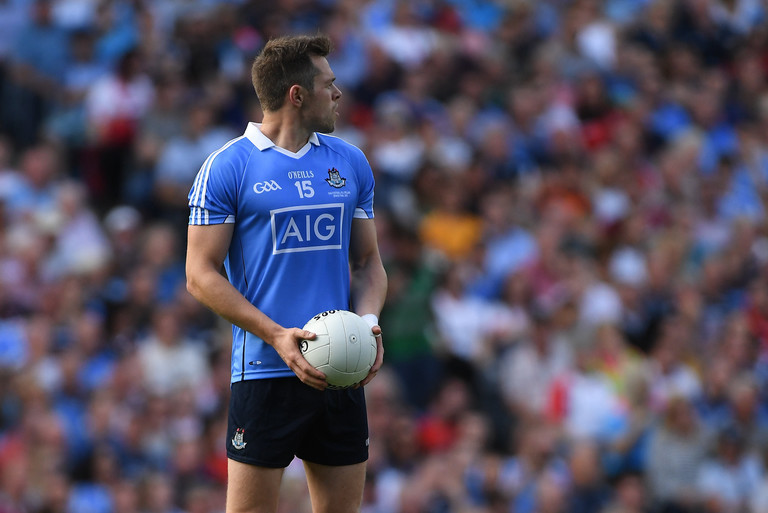 Free taking is one of a few undeniably crucial skills required to succeed in the modern game and will be once again crucial come Saturday night. Rock and O'Connor are both integral to their outfit's chances in Croke Park, in more ways than one.

In many ways, this rivalry has been defined by free-kicks. Whether it be Rock enduring a flying GPS monitor to clinch Dublin the 2017 All-Ireland, Cillian O'Connor's missed free in the same game, his missed equaliser the year previous or the controversial pointed free of 2013, it has often become the pivotal moment that big occasions sway on.

"Dean set his stall out from an early age and spent a lot of time pre and post-training practising his frees.

"I actually remember asking him to stop doing it post-training as we were worried about him hurting himself with muscle injuries, but he and his dad would hang around anyway and practice," explains Ballymun club man Cathal Roche.

He coached the six-time All-Ireland winner from u10 to minor. From an early age, it was obvious Rock had all the attributes to follow in the footsteps of father, three-time All-Star Barney. 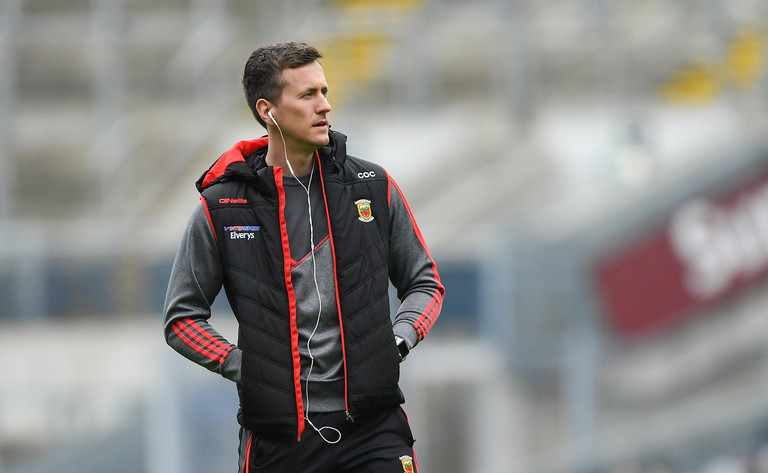 "Cillian and Dean, it is nearly an Irish thing, we take for granted their excellence. Their free taking is above 85%. That is outrageous compared to what the standard was years ago.

"But the thing is, their other work is taken for granted. For example, Cillian would be one of Mayo’s best tacklers.

"Dean, I know Jim (Gavin) questioned his physically a few years ago. That is an area he wanted to improve.

"In both All-Irelands against Mayo, you would see on the tape when an attack broke down and Dean would run over to Keith and put a hand on to let them know he is there, cutting out that option. He is physical now. That is an area Jim challenged Dean on, I know that for a fact."

Their game is about much more placed balls, vital and all as they are. James Horan's high press relies heavily on Cillian O'Connor's work rate. His 10 turnovers during the Championship so far is a remarkable figure that rival county set-ups have pointed to as a model example of how it should be done.

It is a key component of their gameplan.

In the second half of the Connacht final, a Bernard Power kick-out finds Liam Silke on the 45. O'Connor (green) sprints back to apply pressure.

O'Connor gets a hand in and disrupts. Silke tries to get a kickpass away but it falls short.

The ball breaks to Bryan Walsh. Mayo have forced a turnover high up the field.

At 28, O'Connor is now at his peak technically and physically. His is an engine scaled to sustain high-octane pressing and still contribute offensively once they force a turnover. Much of that is to do with the fact he has had time to get his body right.

Lockdown and less game time afforded him this opportunity. Over the past two years, Mayo have played 28 games in league and championship. O'Connor has played in just 11 of them.

"I remember he came in with us in 2011 straight out of minor. Straight away you could see he was to be something special," recalls Varley.

But he is still getting better. You can see by his body shape this year. He was in great shape before, but it has gone to another level this year.

Dubs don’t like him because he brings a physical edge. In 2016 and '17 he was right on the line in terms of physicality and they don’t like that.

"Even his awareness. It is not a coincidence he gets those goals at the back post. He sees things others don’t. He reads the game that way. I mean he is 28 now and has ten years' experience behind him.

"Cillian was never blessed with massive pace but even as a 19-year-old, he wanted to learn all the time. He didn’t have the Mickey Conroy pace, but he wanted to get on the ball in other ways." 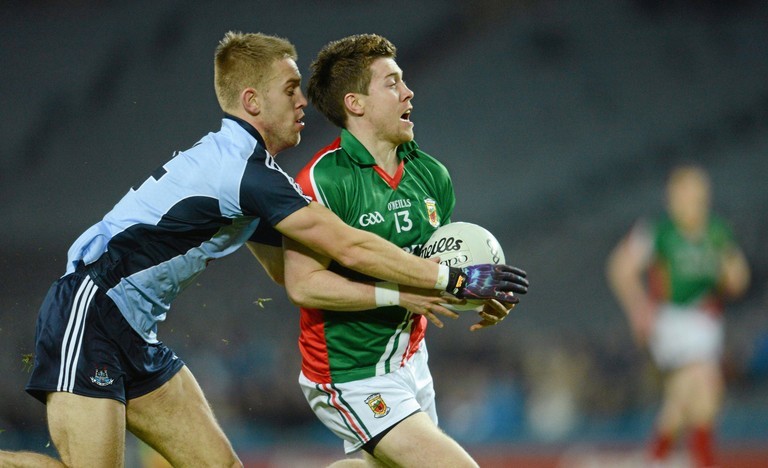 The folk who deny O'Connor's rightful claim to marquee forward status are the same sort who quip ad nauseam about splitting Mayo/Kerry/Limerick after a convincing win. They are best ignored and left in their shopworn wasteland.

He is currently the all-time top championship scorer with 30-328 (418) from 61 games. The closest active footballer is Dean Rock on 10-233 (263) after 48 games. The Ballintubber clubman's 4-9 in the All-Ireland semi-final victory over Tipperary set a new individual record in championship football.

An incredible performance from @MayoGAA's Cillian O'Connor as he gets another GOAL for the side! pic.twitter.com/EdGmkwX9K1

If Mayo are to muster an almighty shock, O'Connor must continue to scale these heights.

Equally, if Dublin are to deny them, Dean Rock must continue to fire. His value is less obvious given the electrifying firepower that surrounds him yet it is decisive. 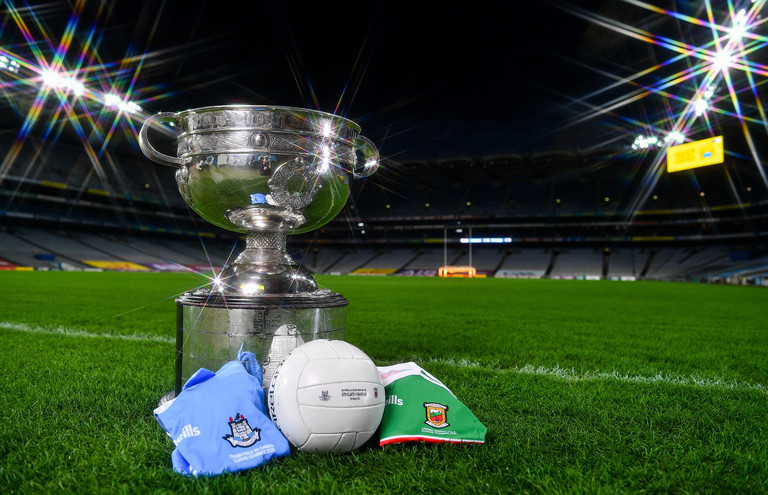 Before last year's drawn final, there was much speculation on how Kerry might restrain Dublin's two player of the year candidates, Con O'Callaghan and Paul Mannion. They were held to 0-1 and 0-2 respectively but up popped Rock with 0-10 including 0-3 from play.

Nor it is a particularly new development. At the end of 2016, Balls.ie conducted their Ballson D'or Footballer of the Year.

Every inter-county manager and captain along with a journalist from each county was asked to vote for one player from outside their own. Who did Mayo manager Stephen Rochford opt for? Dean Rock.

The same year, Dublin snuck past Kerry with a two-point semi-final win. Once again, the Kingdom got much right. Once again, Rock responded. He finished with 0-12 including two points from play.

At the same time, he is a willing worker and strong tackler. He demonstrated as much in a crucial passage during the 2016 final.

Just before half time, the sides are level and Mayo are on the attack. Aidan O'Shea plays a pass to Kevin McLoughlin. 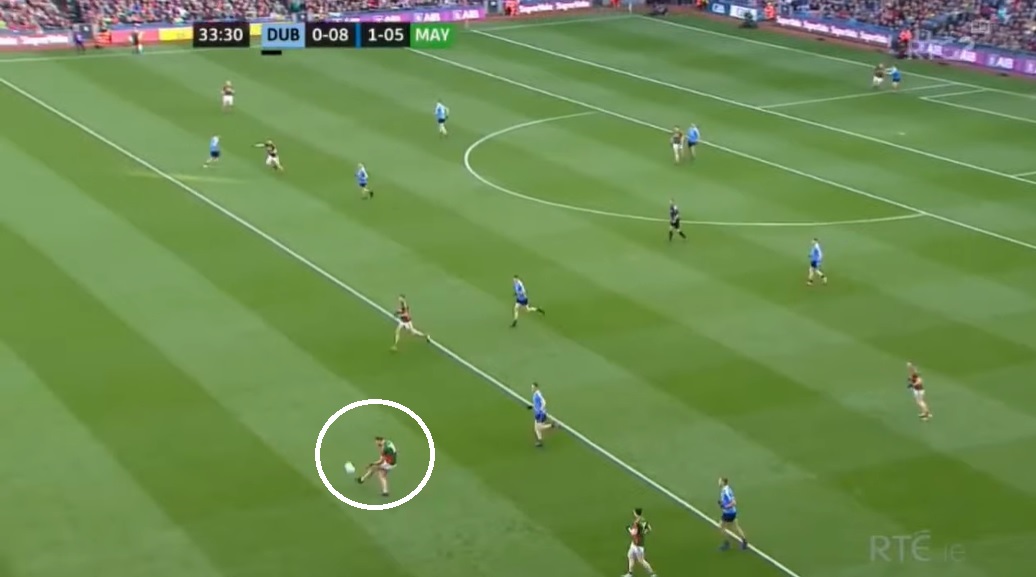 McLoughlin receives the pass, then drives forward to shot at goal. 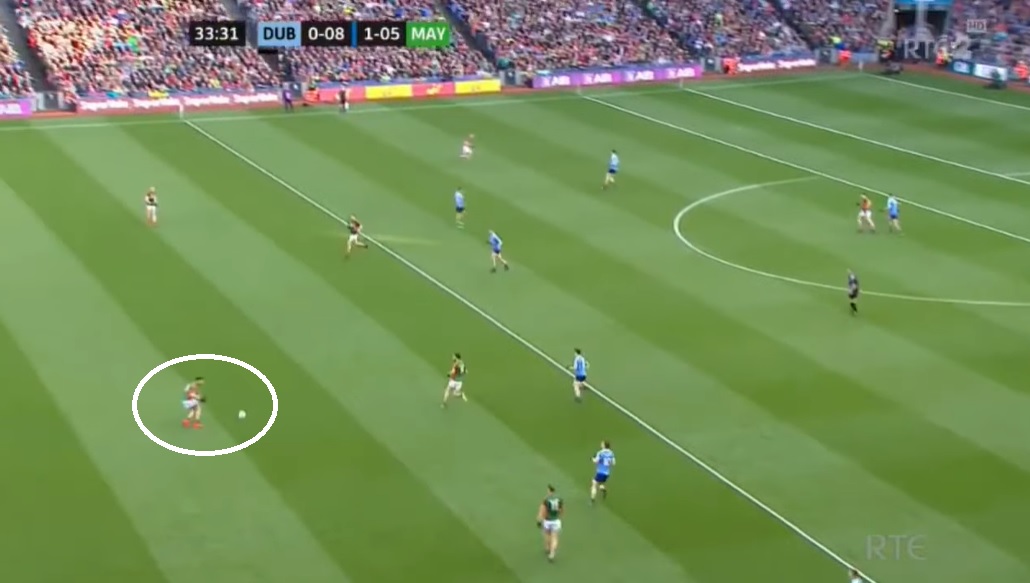 Before he can get the shot away, Rock races in and forces a turnover. 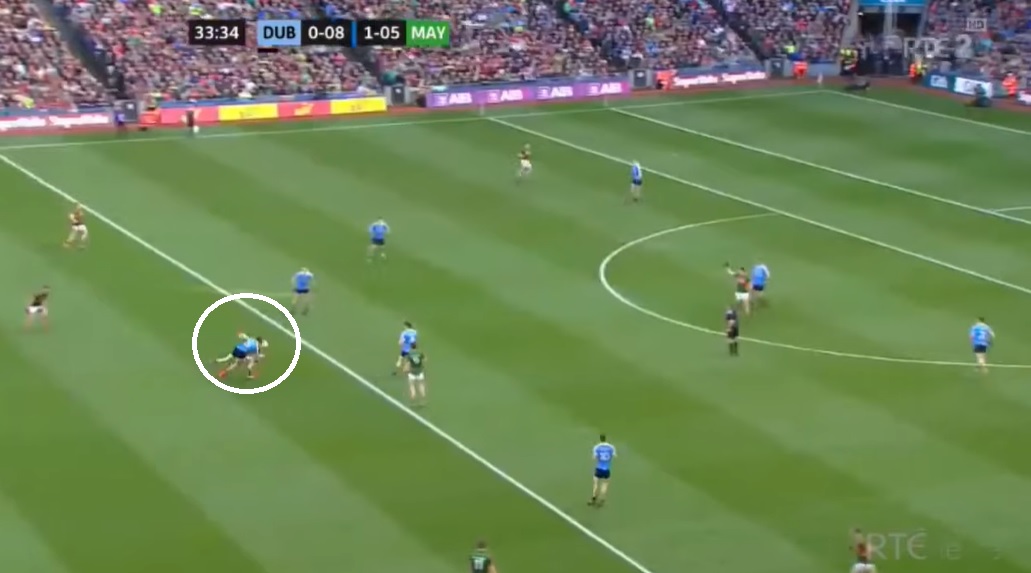 Dublin went on to attack and score thanks to Diarmuid Connolly. From the resulting quick kick-out, Lee Keegan received a black card and Dublin's lead extended to two.

For Rock and O'Connor, they will need to bring similar fire from play while still delivering with their set-pieces. Yet as Alred explains, the mindset is not all that dissimilar.

"You do not have to be as calm as people think when taking a free," he says.

I have actually found better kickers are quite aggressive in their mindset. For example, a simple key for some kickers I work with and a phrase I actually use is 'dominant the kicking tee, crush the inside quarter.' Even that language means you have to be aggressive.

For Roche, it is Rock's boundless reserves that differentiate him from his father.

"He is similar to Barney in that they were both prolific scorers from play and frees, but the athleticism in the modern game is something that Barney wouldn't have had to show.

"Most likely he would have had it, but it is so essential in the modern game and Dean is incredibly athletic. Like his dad, he is also a great talker on the pitch. Constantly encouraging, directing play."

There was a time when free takers contribution from play was so little that teams effectively carried them purely for their dead-ball prowess. Now, the leading lights of Rock and O'Connor have been able to increase the standard while proving capable of carrying their team.

SEE ALSO: 'The Key To Dublin Is Beyond Cluxton Now': How The Kick-Out Is Evolving