What would have seemed so strange a year ago has begun to take on a flavour of normality for Ian Maguire.

Like all other GAA players, the Cork football captain is restricted to working out at home as he awaits the date for when inter-county training can begin.

"It’s probably a tough time for everyone at the moment," said Maguire, speaking at the launch of Sports Direct's five-year sponsorship of Cork GAA.

"Third lockdown. Fourth of February. January was a pretty strange month for everyone I’d say. When February rolled around it was kind of hard to believe that it was February.

"But from my point of view and Cork football’s point of view, we have just been tipping away ourselves. Home workouts seem to be second nature at the moment. Just trying to keep in shape some bit.

"It’s a tough time for everyone, it’s just about keeping your head down and trying to keep fit. I work at home so maybe I’m at a luxury compared to other people but I have a bit of structure to my day. Work from home 8-4, do a bit of exercise.

"I have a bit of a process but it’s not easy at the moment and I think everyone probably has the same experiences."

When the Cork footballers do return to training, it is likely to be without Ronan McCarthy. Due to a team bonding session which took place on Youghal beach last month, the Cork manager is a facing a 12-week ban for a breach of training guidelines.

"I’ll be the first to say, these are sensitive times," said Maguire regarding that situation. He was unable to comment any further adding that "these are all matters that need to be dealt with by the county board".

Being an inter-county footballer put Maguire in a privileged position for part of last year. While the majority of Ireland was stuck at home, he was able to train with his Cork teammates.

"I didn’t feel the full effects of lockdown, to a certain extent, towards the end of last year," said Maguire.

"When we were training, you had three nights a week where you were going out to training and it was something you had in your schedule.

"When we got knocked out of the championship, it was such a difference when I didn’t have those trainings and matches to look forward to.

"This January and February, going back to March (last year) it’s extremely tough but it is just the nature of the beast at the moment for everyone. You just have to be grateful for the position that you’re in and adhere to the guidelines and keep ticking the boxes that you can.

"For me at the moment, ticking the boxes is trying to get my home workouts in my kitchen below. I’ve got an exercise bike, trying to get those exercises in, doing the 5ks. If there’s a ptach of grass I can find, kicking a ball around.

"What can you do? It’s just a strange situation but it almost feels normal. I feel like I’m kind of used to it now because of what we have experienced since March."

Sports Direct’s new five-year sponsorship deal with Cork GAA will see Sports Direct support the men’s senior, Under 20 and Minor teams in both codes and provide a new personalised boot partnership for the senior panels. The new Cork GAA jersey was also launched today and celebrates the three core pillars of school, club and county, that together, form the foundation of Cork GAA. The newly-launched jersey is now available exclusively through Sports Direct Ireland online https://ie.sportsdirect.com/, until stores across the country re-open. Photo credit: ©INPHO/Dan Sheridan

See Also: Jonny Cooper Surprised By How Much Owen Farrell Wanted To Learn From Him 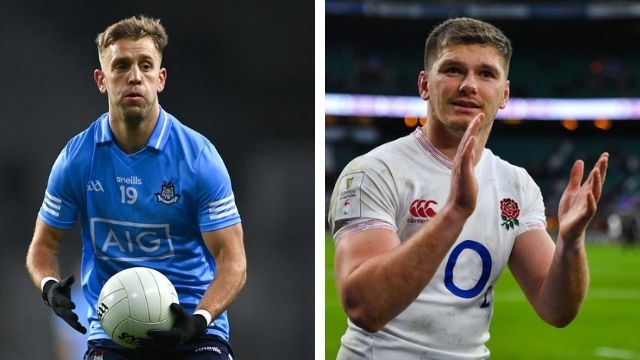