This Limerick Hurling Fan's Trick On An Internet Scammer Is Outstanding

A 22-year-old Limerick student has turned the tables on an internet scammer while simultaneously teaching him about the perils of ill-thought-out hurling tactics.

Inspired by UK comedians, Ross Walsh decided to respond to a spam email trying to con him out of his money. He received a proposal from a man named Solomon who claimed to have a business trading stocks.

"I want you to invest £1,000 in my company for exchange for half business.” 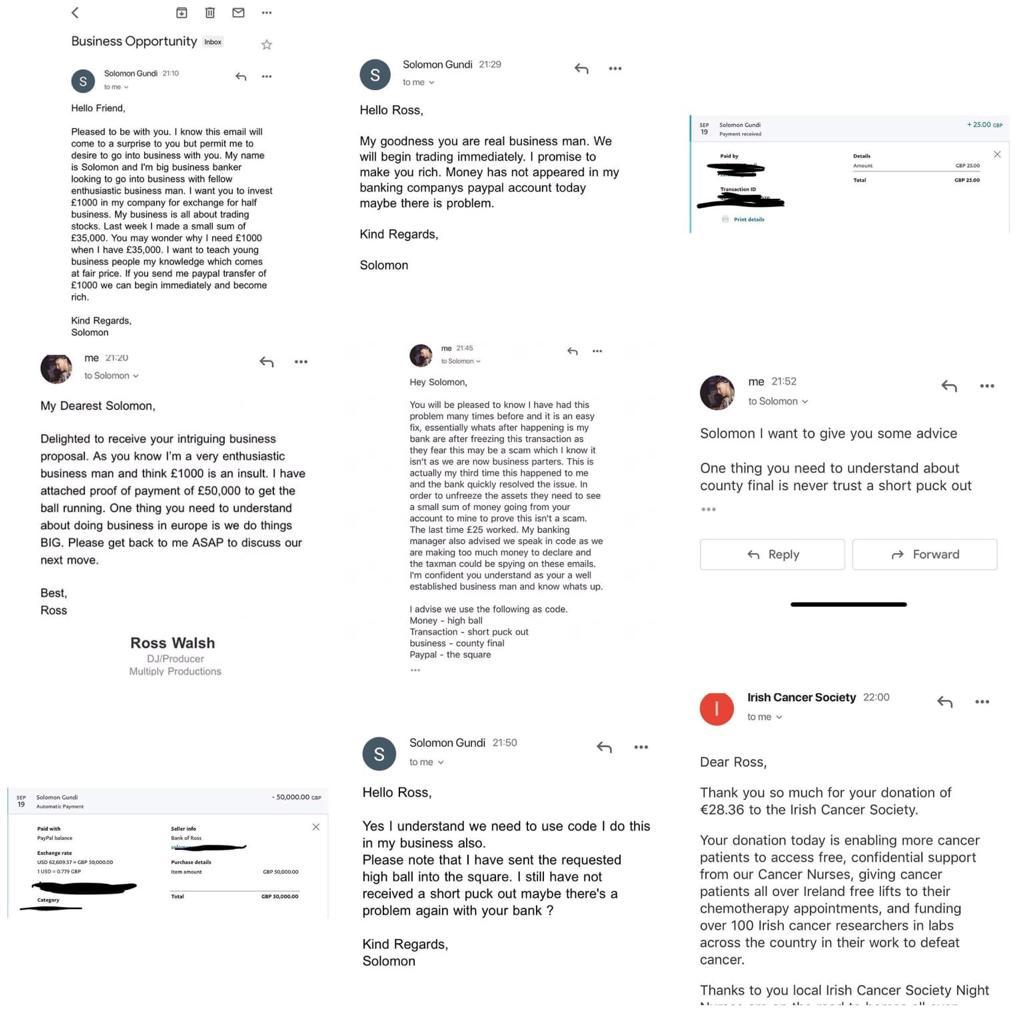 So Ross agreed to send him the money, created a fake money transfer and sent it to the scammer. Then, the Irish DJ told Solomon that his bank had blocked the transfer.

“You will be pleased to know I have had this problem many times before and it is an easy fix,” Walsh said.

“Essentially what’s happening is my bank are after freezing this transaction as they fear this may be a scam which I know it isn’t as we are now business partners.”

The solution was simple: "In order to freeze the assets they need to see a small sum of money going from your account to mine to prove this isn’t a scam.”

But in order to finalise the deal, they needed to speak in code.

Money was now “high ball”. Transaction was replaced with “short puck out”. Business was “county final” and PayPal “the square”.

The scammer fell for it hook, line and sinker.

I have sent the requested high ball into the square. I still have not received a short puck out. Maybe there is problem again with your bank?

To which Ross replied with some shrew advice.

“One thing you need to understand about a county final is never trust a short puck out.”

Checked my spam again and was greeted again with another business proposal which caught my attention. Like the last 2 times I wanted to waste their time so they don’t waste anyone else’s or before they prey on a vulnerable person. This is my largest haul to date a whopping £25 ? Went with a very James Veitch approach ? Scammers 0 Ross 3. Solomon loves hurling ?

Walsh put the money to good use and donated it to the Irish Cancer Society. Lovely hurling.

GAA
10 hours ago
By Gary Connaughton
Confirmed: We Now Have An Official Date For The GAA's Return
79

GAA
6 days ago
By Gary Connaughton
Is There A More Beautiful GAA Pitch In The Country Than This One?
13

GAA
6 days ago
By Michael McCarthy
Revealed: The Best Waterford Team Of The Last 30 Years As Voted By You
Previous Next