Jason Sherlock has addressed the inaccurate reports that he had left the Dublin set-up earlier this year.

The reports emerged after the Dublin selector had missed their opening two league games of 2019.

Despite those stories, Sherlock then got off the Dublin bus with the team prior to their clash with Kerry in Tralee. He was ever-present for the rest of the year as Jim Gavin's side stormed to their historic five-in-a-row.

The former Dublin footballer has now discussed the circumstances in an interview with the Irish Daily Star. According to Sherlock, the situation never got to the 'stage' reported.

I appreciate that there are challenges with the Dublin GAA team for journalists in the sense that it's very hard to get access, I totally get that. I'm not saying everything was perfect, but we weren't at that stage. In some ways, it might have helped things because, when that came out, it was important that Jim and myself showed we were on the same page.

I was forced to listen to talk shows on radio talking about me as if I was gone and thanking me for everything... Everyone is curious about Dublin GAA and I appreciate it's hard for journalists to get access (to check stories), whether that's right or wrong, that's another day's work.

He went on to add that he understood the consequences when he agreed to do his autobiography and the documentary.

"When I did the book, when I did the documentary, I knew that mightn't fit with what Dublin expected. I went into both of them with my eyes open to what the consequences could be and it's a credit to the Dublin management team, the Dublin players, that they accepted it and continued to treat me as part of the team." 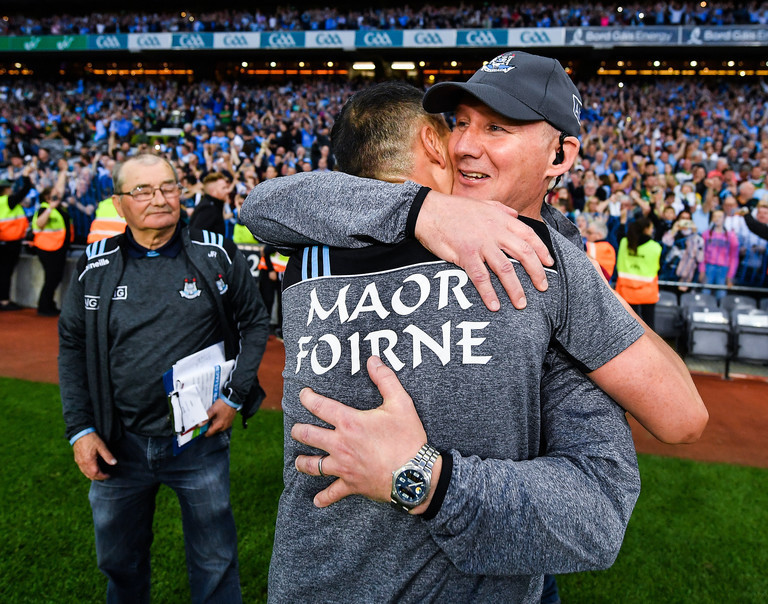 The speculation did little to unsettle Dublin. Come the All-Ireland final whistle, Sherlock cut an elated figure in the midst of the celebrations in Croke Park. "I thought today was an epic game. It was just class," he declared during his post-match interview.

Alongside him was backroom team member Declan Darcy. In that interview with Sky Sports, he stressed that the unity within the camp was key to their success.

The connection within this group is amazing. You could not over emphasis how well we get on. In the management team and in the group. We will celebrate this as well, don't you worry. We will have a great few nights of it. It is massive to be part of this group, there is a great friendship here. We love what we do.

SEE ALSO: 'I Had A Year Left On My Deal At Leeds But I Had To Come To A Decision'

GAA
1 week ago
By Mark Farrelly
Quiz: Name Every All-Ireland Football Final Man Of The Match Since 2010
Hurling
10 months ago
By Michael McCarthy
Quiz: Do You Remember The 2019 Intercounty Football And Hurling Championships?
41

GAA
1 week ago
By Mark Farrelly
Quiz: Name Every All-Ireland Football Final Man Of The Match Since 2010
Hurling
10 months ago
By Michael McCarthy
Quiz: Do You Remember The 2019 Intercounty Football And Hurling Championships?
GAA
1 year ago
By Maurice Brosnan
'If I Took A Break But Stayed Here, You Don’t Get Away. You Would Hear Talk Constantly'
Popular on Balls
Gaming
52 minutes ago
By Andrew Dempsey
Here Is Ireland's Best Starting XI According To FIFA 22's Player Ratings