Tipperary's hopes of gaining revenge for last year's agonising Championship final has gotten a boost today. Okay, it hasn't really but at least they have Jim Carrey on their side.

The Dumb and Dumber star was papped in New York this week sporting a brand spanking new Tipp jersey. 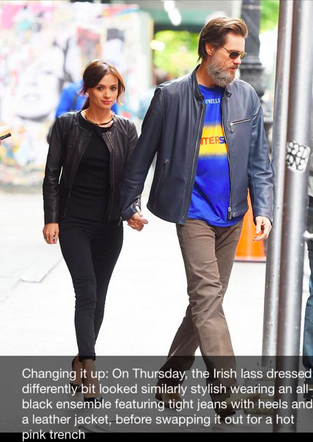 The reason for the county colours is that the young lady in the picture is Carey's girlfriend, Cathriona White who just so happens to be from Cappawhite, Co. Tipperary. According to the Daily Mail, Carrey and White have 'rekindled their love' two years after splitting and we can only assume it is because Carrey finally decided to allow his girlfriend to dress him.

It was the smart choice.

Thanks to Niamh O'Meara for the tip off.

GAA
4 years ago
By Cian Roche
'It Can Be Very Frustrating... That's Probably Why We Went So Mental'
GAA
4 years ago
By Mikey Traynor
Watch: 2 Goals In 2 Minutes Lift Mayo To Hard-Fought Win Over Clare
GAA
4 years ago
By David Kent
The Sunday Game Can't Agree What To Do With Restructuring The Championship
Popular on Balls
Football
1 day ago
By Eoin Harrington
'Ronaldo Is A Cod' - Remembering Eamon Dunphy's Infamous 2008 Rant
GAA
21 hours ago
By PJ Browne
The Draw Has Been Made For Tailteann Cup Opening Rounds
GAA
1 day ago
By PJ Browne
Donal Óg Cusack Defends Dublin Hurlers After John Mullane Criticism
The Rewind
2 days ago
By Eoin Harrington
Watch: Brilliant Dermot Morgan Dublin Segment From 'The Travel Show' Resurfaces