Jim McGuinness criticised the Mayo forward line for their string of missed in their All-Ireland football final defeat to Tyrone.

James Horan's side had a hatful of goal chances that may have seen them pull away at times during the game.

They were, however, unable to make the most of them as Tyrone proved to be a clinical force to run out comfortable winners.

Two moments came out for criticism by McGuinness, with the Tommy Conroy one in the first-half, and then their miss from the spot in the second-half. The latter, although, proved telling.

Speaking on Sky sports after the game, Jim McGuinness was not impressed with the Mayo forward line.

We thought [Conroy] could have taken another bounce or solo there and just made sure and hammered it. He had the ground in front of him.

The penalty opportunity. For me there’s two things wrong with penalty. One is the run up, and the way he took the run up.

In an All-Ireland final, two points down, with the stakes incredibly down, I don’t think you should be going for the top corner.

It’s one where you pick you spot, go low, pick a side and hit it as hard as you can and make sure that it’s on target.

That skip going into that penalty and then going for the top corner. I don’t know if that was the right decision.

The Mayo miss from the spot ultimately swung the game in Tyrone's favour, with Kieran Donaghy admitting the same.

"You could feel it in the stadium," he said. "It was a huge momentum turner. They get a lucky penalty. There's a saying in basketball, 'the ball doesn’t lie'.

I’d say it was a square ball on Diarmuid O’Connor when they got the penalty. You have to take advantage. You have to score it.

When they didn’t score it, you could feel the buzz in the stadium drop. And then for Tyrone to come up the pitch a few minutes later to get the goal, against the run of play, that was it.

That was the game in a nutshell for me. Tyrone were never going to lose it after that.

Mayo's running game came in for lots of praise in the lead up to the final. But it was that asset which was part of their downfall on Saturday evening. 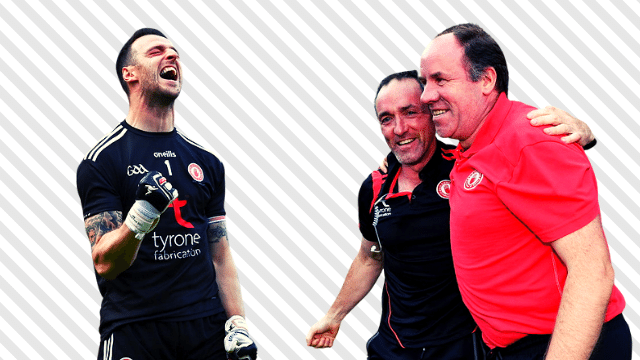