Donegal and Monaghan played out a high-scoring and thrilling draw in Ballybofey on Saturday evening.

Monaghan forward Conor McCarthy was the star of the first half, scoring a hat-trick in 20 minutes, and hitting 3-1 overall.

Post-match, the joy McCarthy must have felt in nailing those scores was neutralised by the result. Monaghan had led by seven points at one stage in the second half.

"The feeling at the minute is disappointment because we put ourselves in a real good position at half-time," he told eir Sport.

"It was definitely disappointing that we didn't capitalise on that. There's definitely a lot of positives to take from today."

There being such a lack of glee in McCarthy's interview irked Joe Brolly.

Joe Brolly on lack of joy in Gaelic football

"You would think that Monaghan got beat," said Brolly.

"What is wrong with people? If I scored a hat-trick in a league game, I would have been absolutely bouncing, 'Let's get pints in the Dungiven club. Wasn't I unbelievable?'

"It's not every day you do it. It was a terrific hat-trick. What's wrong with expressing a bit of joy around the game? This is part of the problem. I call it the 'boardroomification of Gaelic football'. We all sound like politicians now. Everybody says the same things."

"You would think Monaghan got beat!"

Joe Brolly isn't impressed with Conor McCarthy post match reaction despite the fact that he scored a first-half hat-trick for Monaghan!

See Also: The Dublin Vs Kerry Thriller Of 2001 - Where Are They Now? 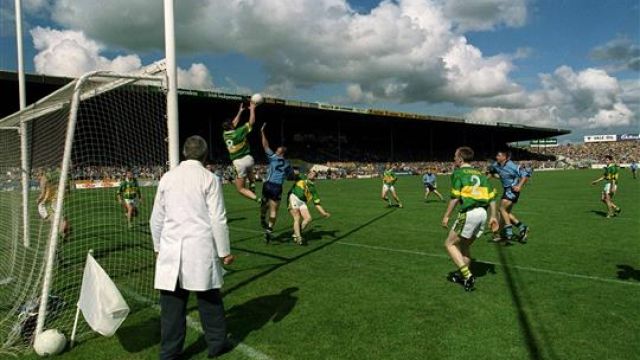 GAA
1 hour ago
By Darren Kelly
Noone Goal Crucial As Galway Retain Connacht Championship
GAA
3 hours ago
By PJ Browne
The Draw Has Been Made For Tailteann Cup Opening Rounds
GAA
19 hours ago
By Ger McCarthy
Four-Goal Cork Through To Munster Final And Date With Kerry
Popular on Balls
GAA
3 days ago
By PJ Browne
Mayo's Padraig O'Hora Using Football To Promote His Real Passion
Rugby
21 hours ago
By Colman Stanley
'That Pace, That Intensity, That Organisation' All Black Legend Has High Praise For Leinster
GAA
22 hours ago
By PJ Browne
Jim McGuinness's Gut Tells Him Dublin Will Win The All-Ireland
33