Brolly And McConville Had Heated Debate About Derryman's Punditry

Joe Brolly and Oisín McConville went head-to-head recently on BBC Sounds' GAA Social podcast. In an episode dedicated to the subject of punditry, the Derryman and Armaghman clashed regarding Brolly's style of analysis.

"I always found Joe entertaining but I would have to say that I didn't feel that I was learning anything about the game," said McConville.

Oisín McConville: I like the passion side of it. Before we started [the podcast], we had 40 minutes talking mainly about football. We talked about coaching. Joe was talking formations. We talked a little bit about Dungiven. There's coaching background there with you, Joe, am I right? So, why do we not get any of that [in your punditry]?

Joe Brolly: You do get that. I used to do that all the time. I used to work really hard on the video packages. I used to show how Donegal played, Donegal's system. I showed exactly how they stacked up zonally, where the weak sports were, where you could get shots off.

That's a very disrespectful thing to say. I used to work very hard with that, right up until the bitter end.

OM: That's not the part that I remember.

OM: Yeah, well, I'm the same with your punditry.

To hear more about what Messrs McConville & Brolly really think of each other's punditry, listen to The GAA Social on @BBCSounds ⤵️@officialgaa | @Armagh_GAA | @Doiregaa | #thegaasocial #BBCGAA

Both agreed that in recent years, games in the Ulster Championship had been hard to analyse due to their defensive nature. Brolly said that on TV, he had attempted to explain what was happening.

JB: Generally speaking, what was happening was teams were dropping off, letting the ball be kicked out to free corner back. It was slowly moved forward to the blanket. You were looking at who was penetrating the blanket - how come Dublin are able to do it? What are they doing?

You're right, we were talking about dross. It was difficult to elevate it to any level above that.

JB: It was all done.

OM: Well, that's not what I remember.

JB: That doesn't mean to say your memory is accurate. It isn't accurate.

OM: I knew when you were bored in studio because you were almost off the chair. The only part of your body that was on the chair was probably your neck and head.

JB: I was keen to never pretend how I was feeling.

OM: I looked at that and thought, 'Joe's bored. Here we go. He's going to have a pop'. That generally happened.

JB: It wasn't gratuitous. I think we also have duty to the game. There's the bigger picture and the smaller picture. There's the small picture of what's happening tactically and systematically but we're hooked into the real world of the GAA, and we see kids' teams starting to put sweepers in for U12 matches. We saw all that.

It's very insulting for you to describe me that way, Oisín, I have to say.

After an interlude where Brolly related a conversation with Armagh and Crossmaglen great John McEntee which "lifted the scales from his eyes" about Gaelic football, the exchange with McConville continued. It should be noted that the final exchange did end with a laugh between the two.

OM: I'm still intrigued that you got insulted by what I said. How many people have you insulted down through the years?

JB: They are totally separate issues.

OM: They are not separate issues. How are they separate?

OM: I didn't say that. It's not disrespectful.

JB: 'Oh, Joe's just a mouth' - you sound like one of those tabloids, the Sun. It's a holistic thing. My personality goes in on top of everything else.

JB: No more than yourself. I would never say that you don't know anything about football.

OM: I didn't say that you don't know anything about football! I said you didn't share it.

See Also: 'It Is An Embarrassment' - Cavanagh Criticises Tipperary And Cavan's Relegation 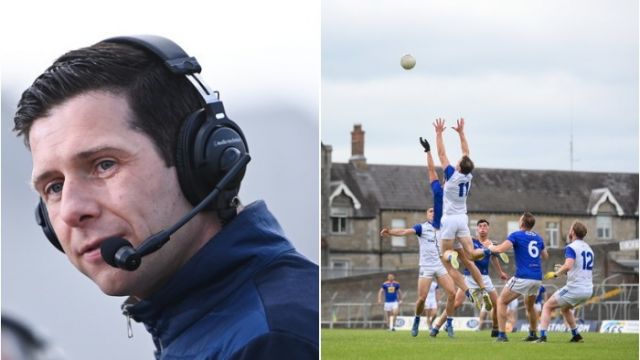