Kilmoyley retained their Kerry Senior Hurling Championship title thanks to a late goal from Maurice O'Connor at Austin Stack Park in Tralee on Sunday.

Kilmoyley, who are managed by former Cork boss John Meyler, beat their parish neighbours, Ardfert, 1-14 to 1-11.

"This is pure hurling," an emotional Meyler, who has had a long association with the club, told RTÉ Radio 1.

"This is real parish hurling, two teams from the same parish - Ardfert and Kilmoyley - all families intermixed. It's the purest of pure. There's no flies here. There's pure passion. Everyone will go home tonight and have a pint together.

"This is symbolic in that 50 years ago, on this day, Kilmoyley won in 1971. Down here it's very emotional, it's neighbouring parishes, it's families. They love their hurling here. There's no football in Kilmoyley. It's a fantastic place."

The win takes Kilmoyley to the top of the Kerry SHC roll of honour with 26 titles, one more than Ballyduff.

"They were outstanding with their workrate, their hurling was outstanding.

"Our little small bits of composure [were the difference]. Maurice O'Connor got a great goal there in the end.

"We hit a lot of unforced wides in the first half. We should have been further up. Darragh Nolan was through for a goal, and he slipped.

"Fair dues to (Daniel) Collins putting over the frees. Adrian Royle came on as a sub and a couple of good points. He's an incredibly talented player. Whether to start him, or bring him on, that's the argument. We feel it's better to bring Adrian on rather than start him. He contributed massively there, as everyone did on the panel.

"Maurice coming up for the goal, you could see it was coming before it came." 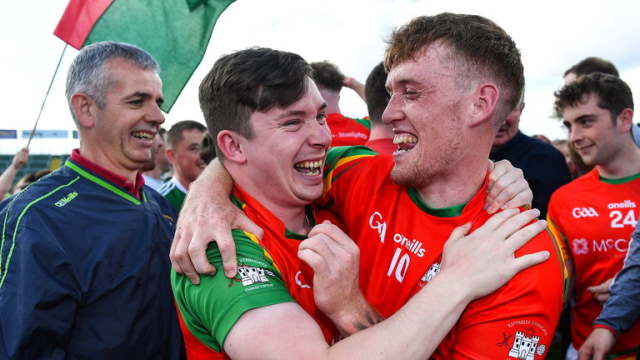