Throughout the provinces you will find GAA clubs bearing the name Mitchel.

There are at least seven more with Mitchel emblazoned on their jersey. They are named for John Mitchel. Born near Dungiven in 1815 and raised in Newry, he was an Irish republican of fame in the mid-19th century. Mitchel became revered for his writings which condemned Britain's part in the Great Famine.

There is another side to the man, one which requires discussion: Mitchel was also an ardent supporter of slavery and a racist who believed black people to be inferior.

In recent days, with Black Lives Matter protests being held around the world highlighting injustices suffered by black people, petitions were launched in Newry to have a statue of Mitchel removed and for John Mitchel Place to be renamed. There are many in the town ashamed that a man with unambiguously racist views is so honoured.

"He was regarded as one of the inspirations for Irish republicans from the 1840s onwards. The view of the famine as genocide, as something inflicted upon us by the British, owes a lot to John Mitchel.

"He was a Young Irelander and was exiled in 1848 to Van Diemen's Land. He escaped to America and was a huge celebrity; you can imagine this Irish revolutionary arriving in the US having escaped from Van Diemen's Land. He was very well-known in the 1840s and 1850s as an international personality.

"He wrote a couple of short books. The 'Jail Journal' is a very famous one, which up to the present day a lot of republicans would have read.

"The other was called 'The Last Conquest of Ireland (Perhaps)' which was about the famine. It's this really searing indictment of British rule and of Ireland starving." 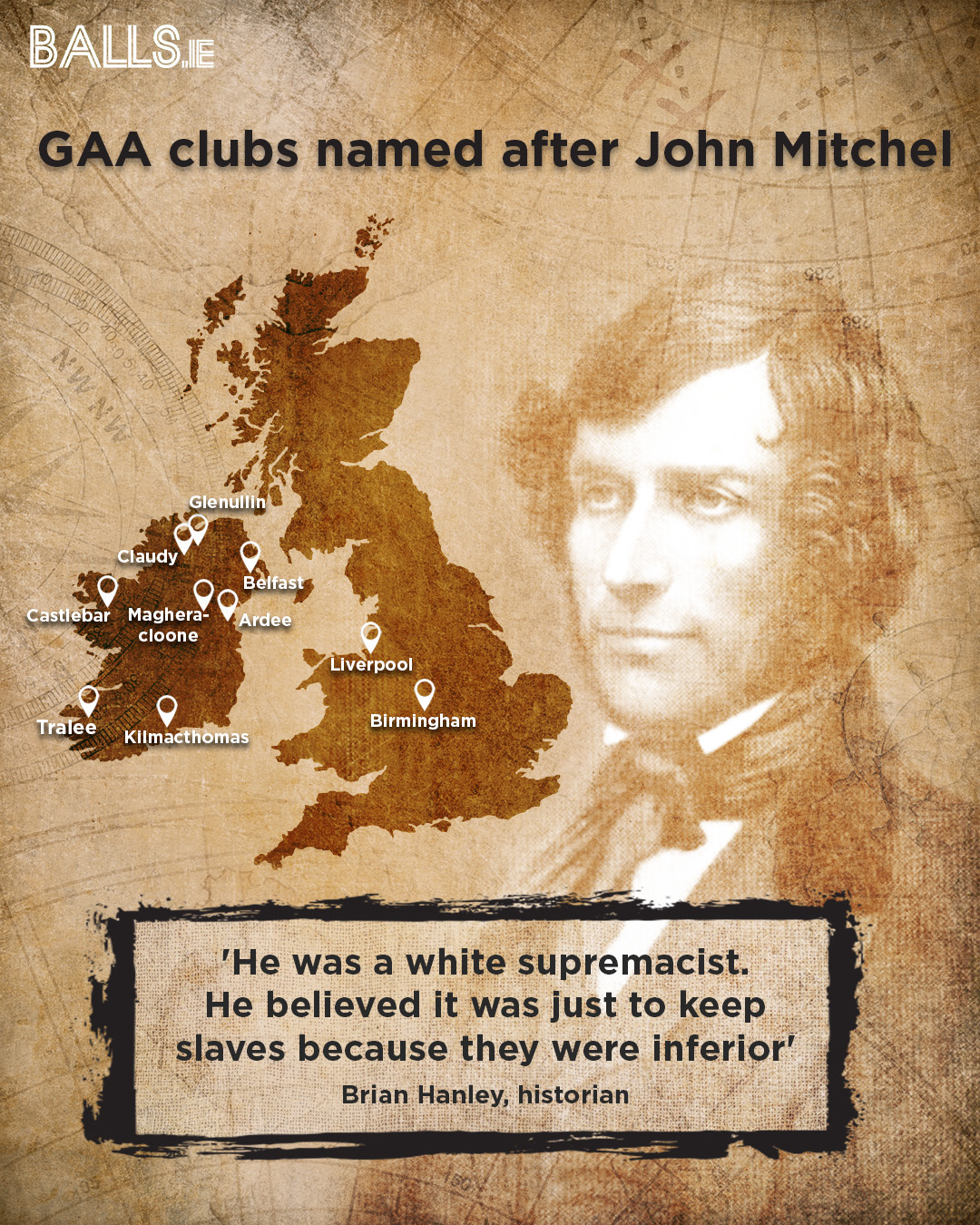 Mitchel loathed Britain, especially its modernity. When he arrived in America, he saw a picture of industrial Britain in cities like New York.

A rural life was what he desired. Mitchel lived in the south and supported the Confederacy in the American Civil War.

"The southern United States was agricultural, pastoral. The plantations and so on, he idealised that - he thought this was a magnificent system," says Hanley.

He was a white supremacist. He believed it was just to keep slaves because they were inferior.

He had a weekly column and wrote about how to give a teenage boy the present of a slave was a great thing because it would teach the boy discipline; it's like a horse, the horse will resist and sometimes you have to whip it but ultimately it does both you and the horse good and it's the same with slaves.

He really was virulently pro-slavery and non-apologetic about that. That wasn't just of its time because there were lots of people who were anti-slavery; he hated them and they hated him.

Mitchel later returned to Ireland. He died in Newry in 1875. Along with the statue and streets named after him, there is the local GAA club, Newry Mitchels.

Balls contacted several of the clubs named for John Mitchel and asked if recent protests had spurred any conversation about their club's name but did not receive any responses.

Nobody who chairs a club meeting on a Friday night, who lines a pitch on a Saturday evening or who wears an umpire jacket on a Sunday afternoon is accused of being racist because they are a member of a Mitchels club. But, in an Ireland more diverse and multi-cultural than ever - one in which young black children will play for and against clubs bearing John Mitchel's name - there needs to be a discourse about him and his attachment to the association.

The GAA - from club to congress - needs to be part of that conversation. It cannot be a mute bystander. This affects members who have entered an organisation at the fabric of Irish society which should be - and aims to be - inclusive of everybody. That they should feel less welcome because of a man who died 145 years ago - no matter how venerated he is for seminal views on Britain's culpability in the famine - is wrong.

"With all these issues, it becomes part of a wider cultural war where maybe people who don't like the GAA or don't like republicanism use it just to score points," says Hanley.

"That shouldn't be the case. There should be a wider discussion about 'What does this mean? Why do we come up with these names in the first place?' John Mitchel never played Gaelic sports. The clubs are named after him because he is a republican hero.

"In the early 1900s, there were lots of GAA clubs named after Boer [War] leaders. I don't think there's one existing today. That was done because they were fighting the British, so we named clubs after them. That changed, so there's no reason why John Mitchels couldn't change either.

"It needs to be a discussion rather than, 'All you clubs change your names now because you're all named after a racist'  because that doesn't lead to a discussion. It just leads to people becoming defensive.

"Let's have a discussion about John Mitchel, why was he famous, why did people adore him, what does it say about America and Ireland at that time.

"And, do we then need to recognise that there are actually people playing for these clubs who would have 150 years ago have been regarded by John Mitchel as inferior? Therefore, do we need to do something about that?"

GAA
1 week ago
By Balls Team
We Investigate The Incredible Trend Of Kerry Jerseys At The Masters
GAA
2 weeks ago
By PJ Browne
42 Years After All-Ireland, Hugh Duggan Says Farewell In Las Vegas
Irish Life
1 month ago
By PJ Browne
9 Rising Stars Of Irish Women's Sport
Previous Next