Kerry under-20 manager John Sugrue does not understand the fuss surrounding how the Kerry football captain is selected. A motion to allow the Kingdom's senior management team choose the captain from next year on was not passed at county board meeting on Monday evening.

"I think only Donald Trump gets as much media coverage at this time of year as the Kerry captain," Sugrue said on Tuesday at the launch of the EirGrid U20 Football Championship.

"It’s one of those things and I don’t get the attention it gets from the media. It’s one player on a team, the team comprises 15 players with maybe another 18 or 19 on the panel. Why all this talk? You can say what you want about different methods (for picking a captain), but it’s very much a case of each to their own and what Kerry do and what other counties do – who’s to say what’s right or wrong.

"I think a captain is a C put under your name on the team (sheet), you play on the team and it’s a small role in a group dynamic. If the group dynamic is strong enough it doesn’t matter who’s captain." 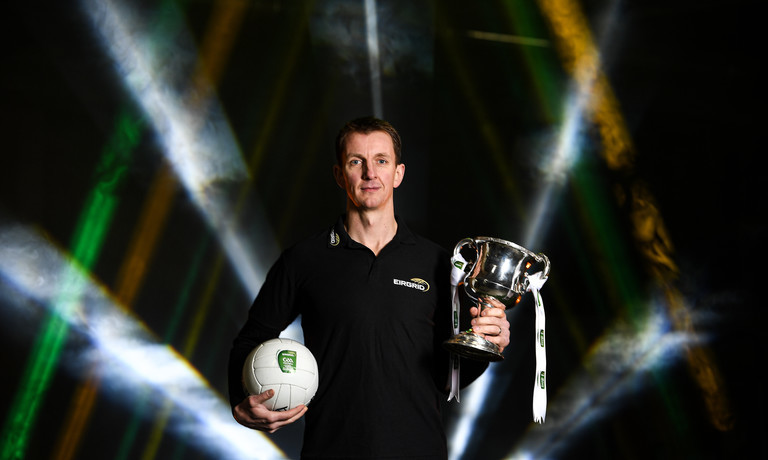 On hand to launch the 2020 EirGrid GAA Football U20 All-Ireland Championship at Croke Park in Dublin is Kerry manager John Sugrue. Photo by Brendan Moran/Sportsfile

Sugrue was appointed Kerry under-20 manager in October having stepped down after two years as Laois manager in July. A native of Renard, Sugrue lives and works in Portlaoise where he runs a physiotherapy clinic.

"It’s a great opportunity and I’m enjoying it so far," he said.

"When I talk to the group below there’s no dialect issues and that’s refreshing!

"Senior inter-county management is very enjoyable, but there’s a lot of work that goes on behind the scenes and you have to have that time and space to do that, which is hard to do.

"I have a young family at home, two young kids, so it’s a big workload, but very enjoyable because on the days when you go out and win a game the community of Laois last year, or hopefully Kerry this year, come out and enjoy it with you and that makes it very enjoyable.

"I’m probably working away a little bit more behind the scenes, which is great. You can work away and stay with the bunch of guys you have; there’s less distractions.

"In terms of logistics though it’s probably that bit much more difficult because you don’t have that real high-level access to players – they have other draws on their attention and other commitments, so it’s a little more challenging in that regard."

EirGrid, the state-owned company that manages and develops Ireland's electricity grid, has been a proud sponsor of the U20 GAA Football All-Ireland Championship since 2015. #EirGridGAA.

Quiz: How Well Do You Know The Inter-County GAA Weekend?

gaelic football
1 month ago
By Andrew Dempsey
How To Watch Offaly v Roscommon In The All-Ireland U20 Final
GAA
1 year ago
By PJ Browne
Cork U20 Manager Keith Ricken Has Admirable Take On Releasing Players To Clubs
GAA
3 years ago
By PJ Browne
Watch: Derry's Callum Brown Scores Brilliant Solo Goal Vs Mayo
Popular on Balls
Golf
23 hours ago
By Jonathan Byrne
Sky Sports Ryder Cup Coverage Is Getting On People's Nerves
34