Cork’s Redemption, Tyrone’s Revenge: Journeys Through The Back Door

All-Ireland triumph is a difficult thing. At the Championship’s commencement two roads diverge, few succeed down the backdoor route, the road less travelled. This weekend is the last round of the qualifiers as eight are set to become four and progress to the quarter-finals. Two of those games will be broadcast on Sky Sports this Saturday evening, with Cork facing Tyrone at 5pm and Fermanagh against Kildare at 7pm.

Not since 2010 has a team emerged from the qualifiers to lift the Sam Maguire trophy. The ‘backdoor’ system was originally created in 2001 and was met by a ferocious backlash amongst the traditionally conservative GAA sphere. ‘The stronger teams get stronger and the weaker teams get weaker’ was the view of then Antrim manager Sean McGuiness.

2010 was this decade’s gaelic football highlight for the rebel county. The newly developed Páirc Uí Chaoimh would not have required extensions to their trophy cabinet as since then they’ve only added one Munster title and one All-Ireland semi-final showing.

‘Maybe we were different. I prefer matches every one or two weeks as opposed to waiting three or four. It feeds your focus when you are going week on week. When you are winning them, it is continued confidence. If you are waiting around for two or three weeks, the first week you are training hard, there is a lot of running again. It is tough. I found week on week was great. Playing your games, getting your win and getting good football played.’ 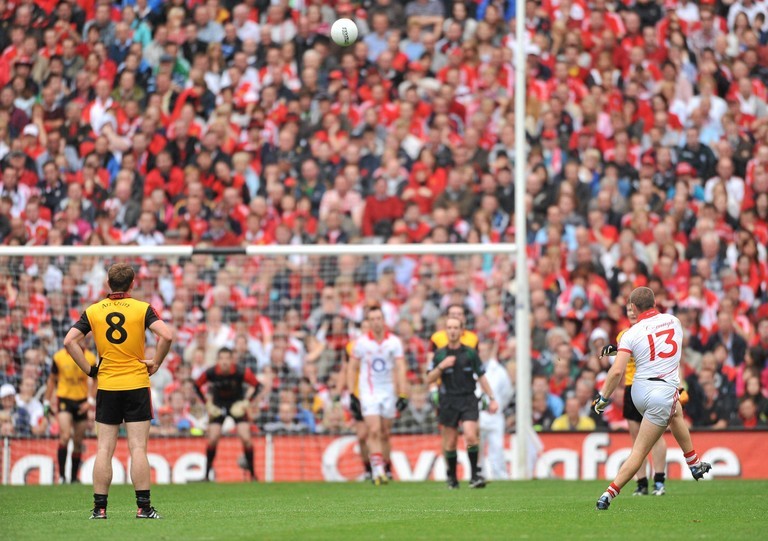 One of the iconic images of Cork’s 2010 success is that of a fresh-faced Daniel Goulding looming over the placed ball. More often than not, the Éire Óg man would languidly send the ball on a looping arch over the black spot. He enjoyed a phenomenal campaign that year and credits a consistency of games as one of the reasons for that.

You literally have a week or maybe two weeks prep depending on the draw.  It really does focus the mind. There is a lot of game time at a high level, a Championship level and that is what you want really. Don’t get me wrong, it is fine to go the other route as well, great to go all out for Munster but I don’t see any huge negative from going through the qualifiers. Injuries? You can say that for either route.

Goulding retired in 2016, yet his passion for Cork football is obvious. One of the few in the county who is inclined towards the big ball rather than the small. Dual counties often struggle to foster comparable levels of support and Cork is no different: 'Even in my time, there was a nucleus of three or four thousand that go to most games and I think that is just the way it is. Hurling is the more followed sport and they get the bigger crowds every day.'

This is nothing new. In 2011, Cork's combined home attendance for their home Munster quarter-final and semi was just over 7,000. Kerry attracted over 16,000, and their semi-final was away to Limerick. Goulding is a prime example of the mindset needed to be a successful Cork footballer and for him, support is considered as irrelevant.

The last four - five years Cork are nearly playing better away from home than at home. It would suggest that it doesn’t come into their heads about a fanbase but maybe they feel under more pressure at home. We never focused as a group on supporters or talked about trying to use the fans, we talked about a performance for ourselves.

They would have been working last week on getting heads right, forgetting about Kerry and getting a new focus. The next seven days is about fully committing to the plan they have for Tyrone and everyone buying into it. You saw what Kildare could do with a siege mentality.

Cork's opposition on Saturday are veterans of the scenic route. Tyrone's Ulster quarter-final loss against Monaghan resulted in significant concern for their All-Ireland credentials but two of Mickey Harte's three titles came this way.

In 2008, the last round of qualifiers saw Tyrone take on Mayo in Croke Park with an All-Ireland quarter-final spot on the line. An aging Tyrone had been dumped out of the Ulster Championship by Down but traversed through the back door and led Mayo by a point in the dying moments. Mayo launched one last late attack and a long ball was delivered into Trevor Mortimer. Mortimer offloaded to an onrushing Aidan Higgins, who ran into a thundering brick-wall as a barrel-chested centre-back with his distinct luminous green gloves swarmed Higgins and forced the turnover. 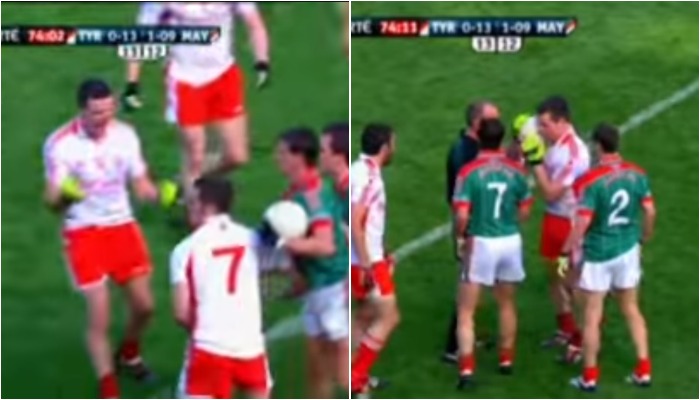 The tackle reveals much about Tyrone's mentality at the time. The centre-back broke into wild celebrations with a double fist pump, before eagerly gathering the ball and refusing to relinquish it. At one point it looked like the referee himself was going to fail to prize it from those bright hands. But he did and the final whistle went. Conor Gormley's delight was evident.

I suppose for a day or two after the Down game, definitely that evening, you thought 'oh no, long road to go here.' Once we sat down with Mickey and watched the video a hell of a lot of positives came out of that game. That game turned our season around. We knew it was a long road to go but we saw the positives. A lot of people said we had no hope of winning anything, we were a finished team and all that.

That gave us the motivation to go on and win silverware. I think it is a similar situation to Tyrone at the minute. We had some dodgy performances that year too against Mayo in Croke Park or Westmeath at home.

Gormley retired in 2015 with three All-Ireland medals in his back pocket. While the majority of his former team-mates are gone, one crucial man remains. 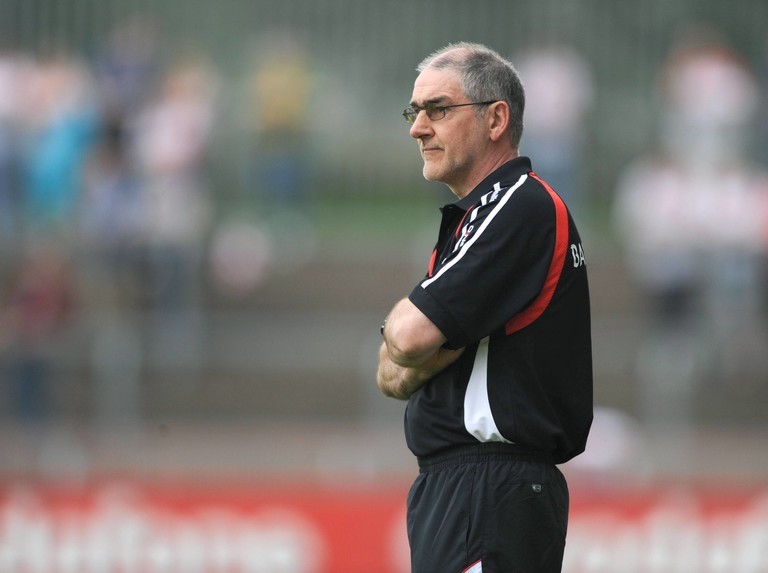 'Sometimes it didn’t look pretty but we got the results. A lot of that came from Mickey (Harte) and we had a lot of confidence in each other as well.  In fairness to Mickey, he was always a great motivator, a good thinker of the game. He’s tactically astute. He had us well geed up for games.

'Most of his talking is done at the first training session after a game on a Tuesday night, or even after a match. He will straight away focus on the next day. Organise for that, the next challenge ahead.'

The 'everyone wrote us off' outcry is an all too familiar tale in the GAA. It is regularly bandied about as motivation, with irritation or as vindication for effort. Enda McGinley soldered alongside Gormley for all three of those All-Ireland victories and admirably admits the questioning of the Tyrone dynasty were forthcoming from within the dressing room as well as in the papers.

The doubt, it was palpable. To be honest you can’t completely deny that to yourself. As a team, you are thinking 'maybe we are gone.' Maybe we won't fully get back up. What assurances have you had? I remember being on the bus outside Newry after the Down game as the crowd trailed away. I was chatting to Philly Jordan and we were just saying that if it is going to be the end of this team, at the very least we owe it to ourselves to have one last final crack at it. There was that sentiment, that maybe things were coming to an end.

Mickey would never speak like that. He never had any doubts at all that we would be challenging for an All Ireland. Gradually that belief then rubbed into the rest of us.  To go on and win an All Ireland. That is Mickey Harte.

That 0-13 to 1-9 victory over Mayo was a monumental one for Tyrone. It was affirmation that they were on the right path, even if others failed to recognise it.

'The Mayo game was the big one, it was misread by the pundits out there. I remember sitting in the team meeting that morning and the Mayo team was up on the board, that team was a real decent quality side. I remember thinking 'this will be tough today.' Now we came through it and it wasn’t pretty. We didn't really get any credit at all for it but as a team, we were delighted for that. It left us in a perfect situation coming in against Dublin. Dublin had sailed through Leinster and were getting a lot of hype, we were rubbing our hands really.' 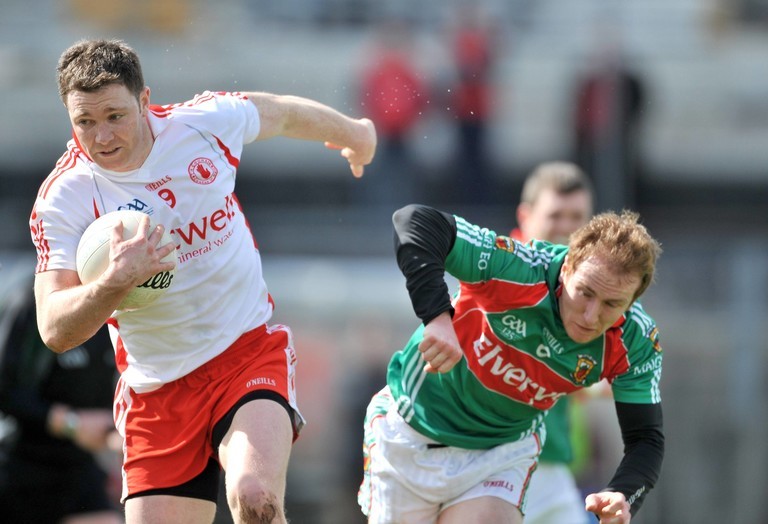 This Saturday against Cork is Tyrone's fourth game in five weeks. Managing this intensity is once again where Mickey Harte comes into his own. Players want to play games and Harte recognises that. Fitness and conditioning are prioritised in pre-season and the only focus now is recovery, something McGinley appreciated as a player.

It is brilliant. You get into a lovely rhythm. You play your game, you recover with an ice bath and recovery after the match. We'd all go back to the meal and each game just came week in, week out. The season flew past. It was excellent. I was never tired, Mickey would be particularly good at this. Week on week, you can allow yourself to feel tired in your head. Come really big games, you are pushing your body to the limit. Your body is always trying to offer excuses where you can say 'no, I can't do that, I've done enough' or 'I cant make that run.'

There are always wee excuses for that. You are beat, you are tired. With that frequency of games coming in, your body will easily use that as an excuse. But if you prepare right it will only make it stronger and Mickey was brilliant at that. We never felt fatigued, that mental fatigue, we never felt it coming into games.

Saturday's tie concerns McGinley, as Tyrone's opponents arrive on the back of one superb performance and one atrocious one. 'Cork is a very tricky game, I’m nervous about Cork. They are just a wee bit of an unknown.'

Cork on a mission for redemption, Tyrone on a quest for revenge. Roll on Saturday.

Sky Sports have another live and exclusive doubleheader on this Saturday July 7th. Coverage for the Senior Football Championship Qualifier between Cork and Tyrone starts at 4.00pm. It will be followed by coverage of Fermanagh vs Kildare.

For the latest online news go to www.skysports.com/gaa