Do Kerry Need To Drop Their Most Experienced Player To Win The All-Ireland?

For now, everything that happens in this year's Gaelic football championship forms a brick on the familiar road to one ultimate showdown.

Dublin's underwhelming performances are of reduced concern because they are aiming to peak at the end of August. Kerry must continue to find the balance between defence and attack while avoiding a repeat of 2020's calamitous misstep.

All else is a stress test. Kick-out strategies, attacking combinations and defensive organisation are judged through the prism of their value in an All-Ireland final. At the heart of it all is the midfield matchups. 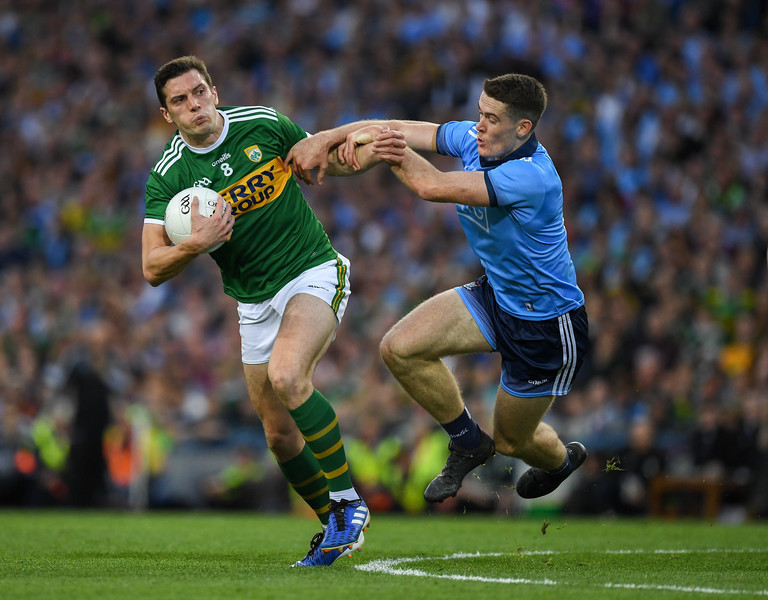 The ease with which Jim Gavin moved on from Michael Darragh Macauley was telling. It took just 13 days, the length of time between the 2019 drawn All-Ireland final and the replay, for Brian Fenton's partner to move from the former footballer of the year to James McCarthy.

Last November that duo persisted. It was yet another reminder of the champions ability to produce ever-willing cogs that continue to fire the machine. As it turns out, some cogs are more important than others. McCarthy could move forward because John Small could slot in at six. His injury has forced Dessie Farrell to innovate, pairing Peadar Ó Cofaigh-Byrne with Fenton. They have not been as productive.

Chances are come a final, Brian Howard or McCarthy will operate in the engine room. This is what Peter Keane needs to be ready for.

Which poses a question, how would Kerry counter it? It was something that proved relatively straightforward in 2019. Now, with the emergence of Diarmuid O'Connor, Jack Barry's success versus Fenton and strong showings from Adrian Spillane, it is an understandable debate.

The Case Against Starting David Moran

Oisín McConville has repeatedly advocated for change. He outlined his reasons why on the Irish Examiner podcast at the end of the league campaign.

In midfield, they have a lot more energy. Pace, power and fielding ability.

Some of the questions that come out of the game for me. David Moran, is he still an option for Kerry in the middle of the field now? If he is, O’Connor has to play alongside him. He gives the energy and athleticism to get up and down the pitch.

Moran collected his second All-Star in 2019. He is the most experienced player in the squad, having made his debut in 2008 alongside Tommy Walsh. Few would have questioned the 33-year old's place if not for what came in 2020.

The Munster semi-final loss was a death by a thousand cuts. Conditions reduced the margins. Team selection, tactical deprecation, dogged opposition and dreadful finishing all played a part. As did a lack of leadership. The malaise even spread to the usually composed Moran. 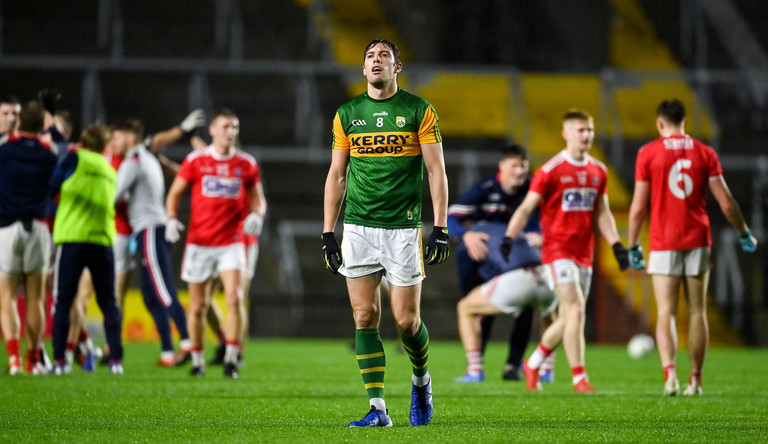 As normal time ran down and Cork were chasing an equaliser, he conceded a black card after a lazy tackle on Ruari Deane. 14 minutes into extra-time, he kicked a wayward free to a Cork defender.

With his side two points up with four minutes on the clock, an ill-advised shot dropped short. Inexplicably, in the final minute of extra-time and with a one-point lead, he did it again and attempted a shot from the edge of the D that fell into Micheal Martin's hands.

His use of possession against Dublin last May was also poor. Early in the second half, Moran made way for Spillane. The Kerins O'Rahilly's man looked out of form and Keane had more athletic options.

Cork’s last 2 scores (point and the winning goal) came from these short David Moran shots. The old adage of ensuring your shots go dead was never truer today.
Just one of those days that Kerry were destined not to win given all their misses throughout the game. pic.twitter.com/xCjZA5jY5S

The Case For Starting Him

I would say they have a serious option in the middle. David Moran is starting. Even if the short or wing kickout is not on, the size of that man there. He is serious and has brilliant hands. They do have options and Fitzgibbon has been trying different things. David Moran didn't play against Tyrone but if they are going to compete against Dublin you are talking about matching Brian Fenton.

One area they have is opposition kickouts. With Moran in there, it is not going to be easy to launch the ball on top of Darren O'Neill.

Against Clare and Tipperary, Moran demonstrated why a reactionary decision to drop him would hinder Kerry. For all the running, primary possession remains the most valuable commodity. Here he is the maestro.

He won or disrupted 10 opposition kickouts. Against Tipperary, he collected three from Shane Ryan. In the same game, he was one of the Kingdom's most active players with 27 possessions. He has also kicked 0-2 in the Championship so far, more than O'Connor, Spillane and Barry combined.

Moran positions himself in the centre of the field. 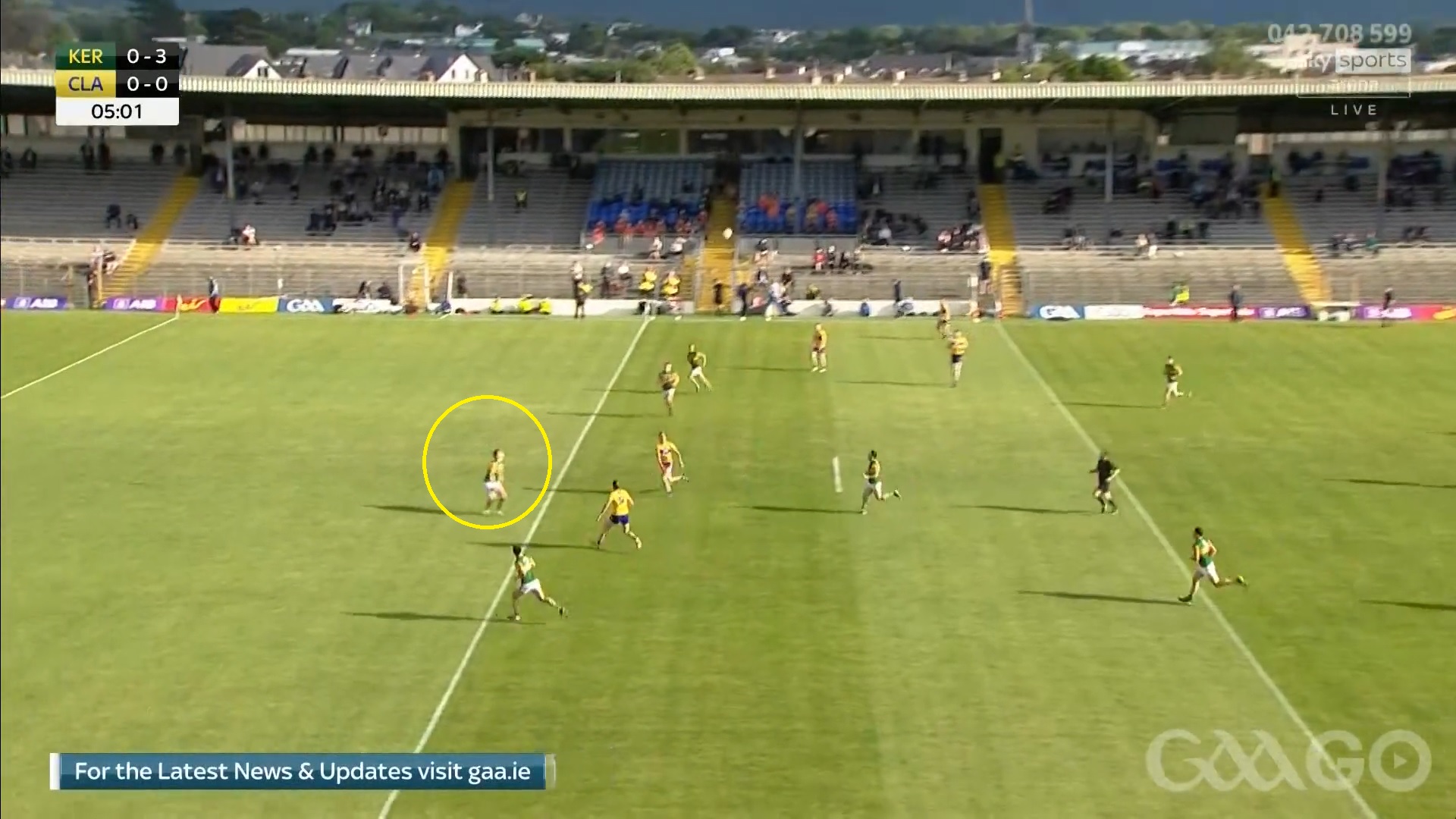 Immediately, he catches a mark and launches an attack. 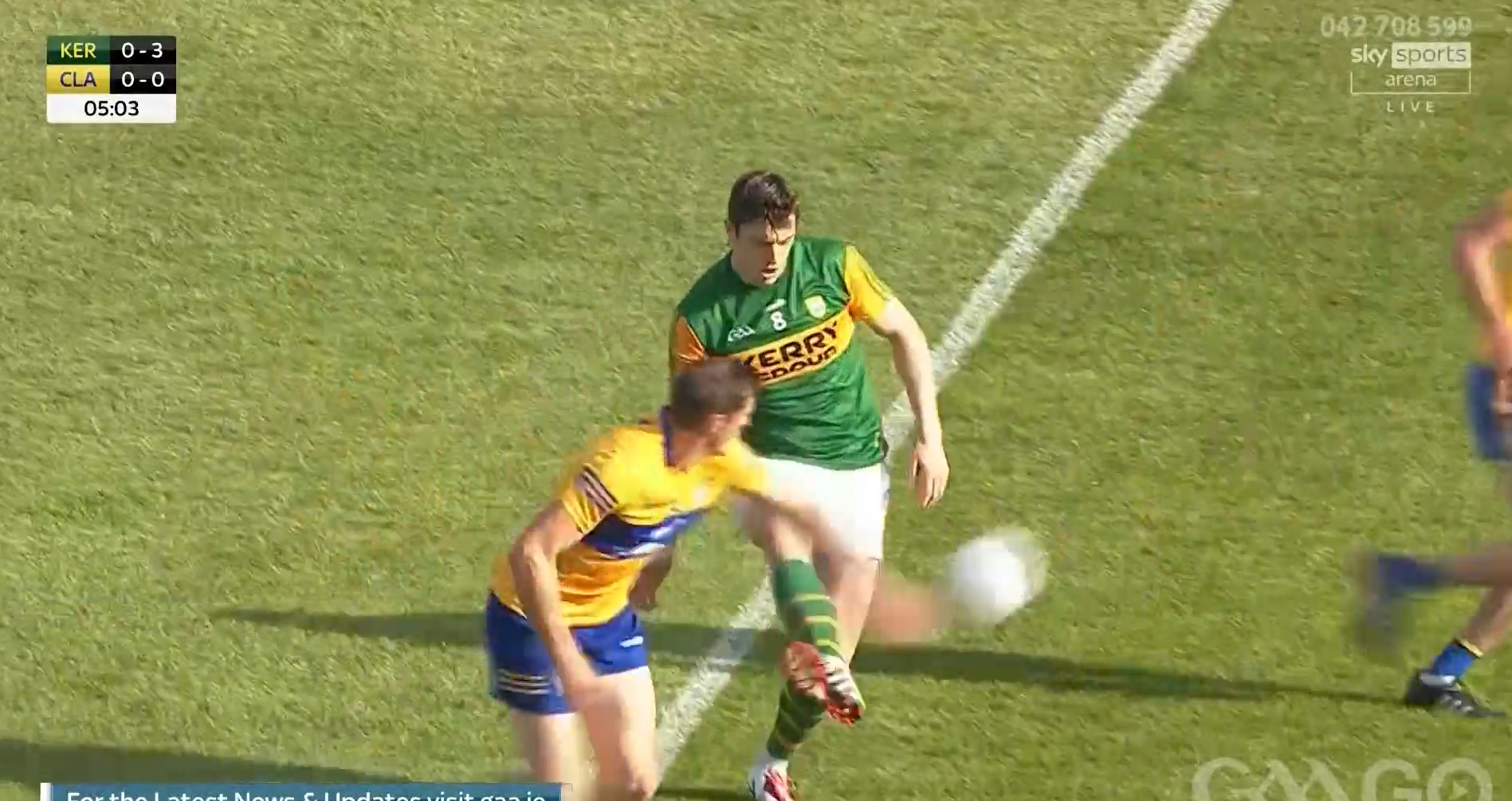 The veteran has a simple strategy on opposition kickouts. Instead of man-marking, he takes up a position in the centre of the field and waits for the goalkeeper to commit before moving towards the ball.

Moran holds the centre, despite his opposite number breaking to the wing. 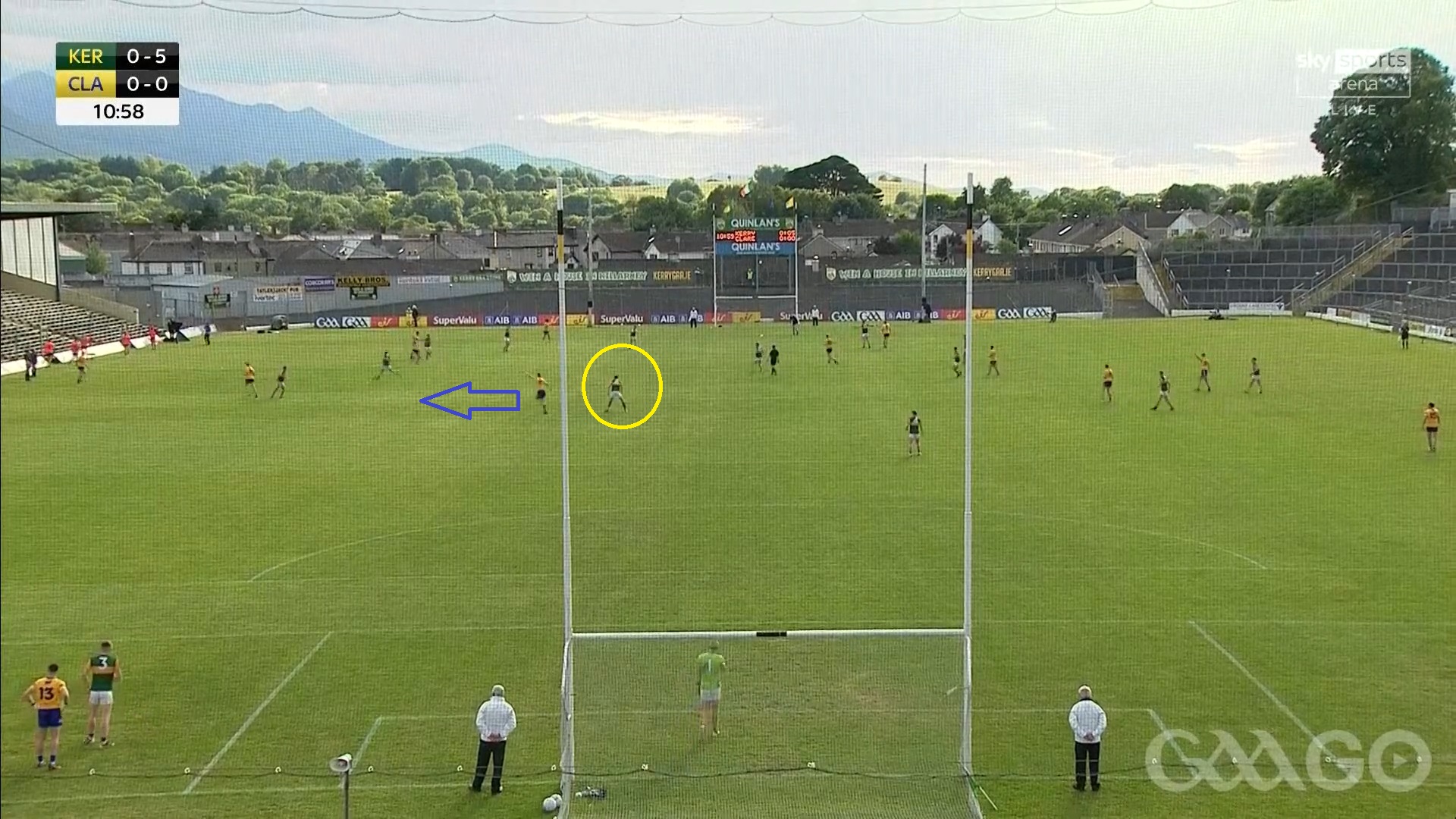 He reacts to the goalkeeper and tracks the ball once it is in the air. 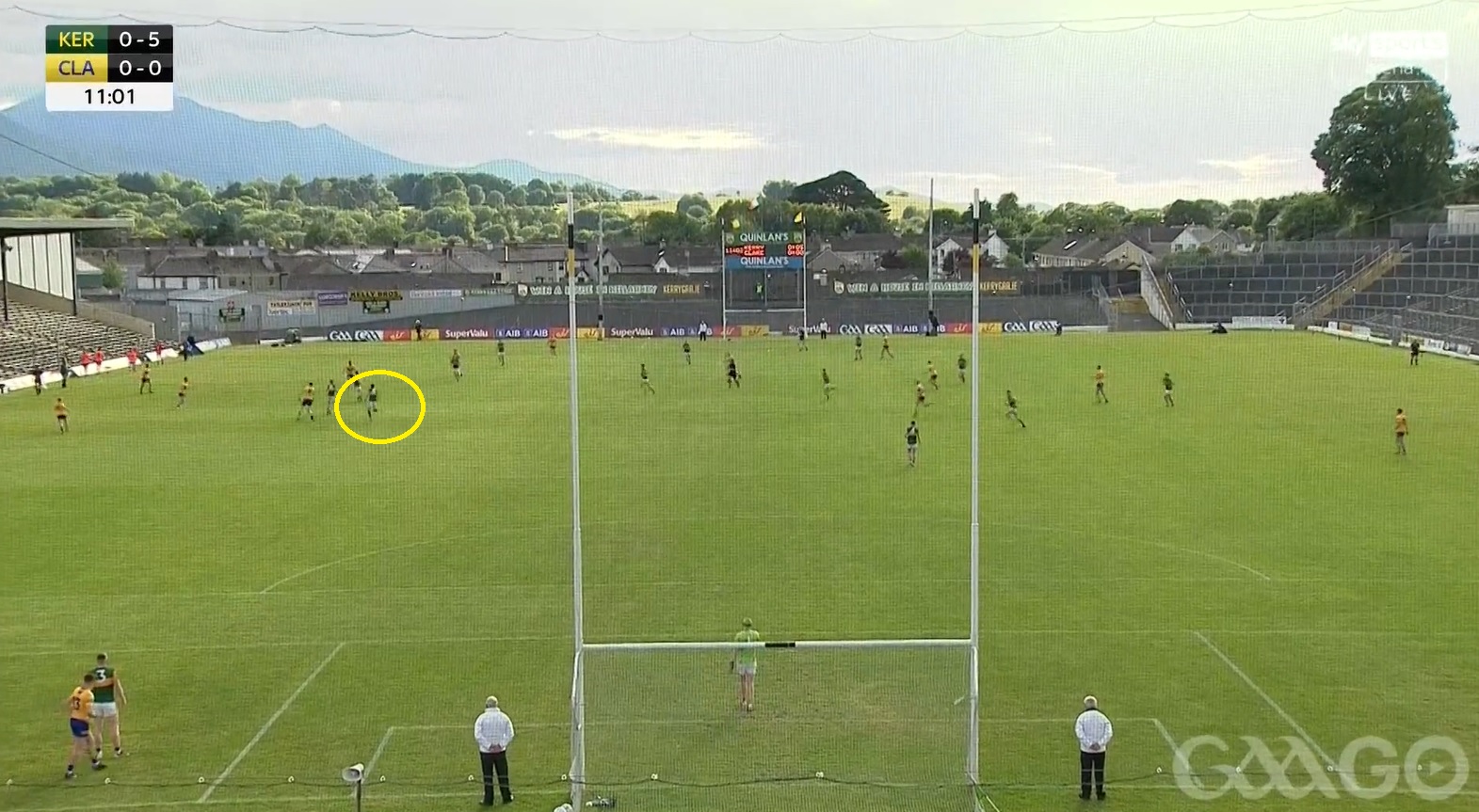 Eventually, Clare position two men on either side to try to obstruct his tracking run. 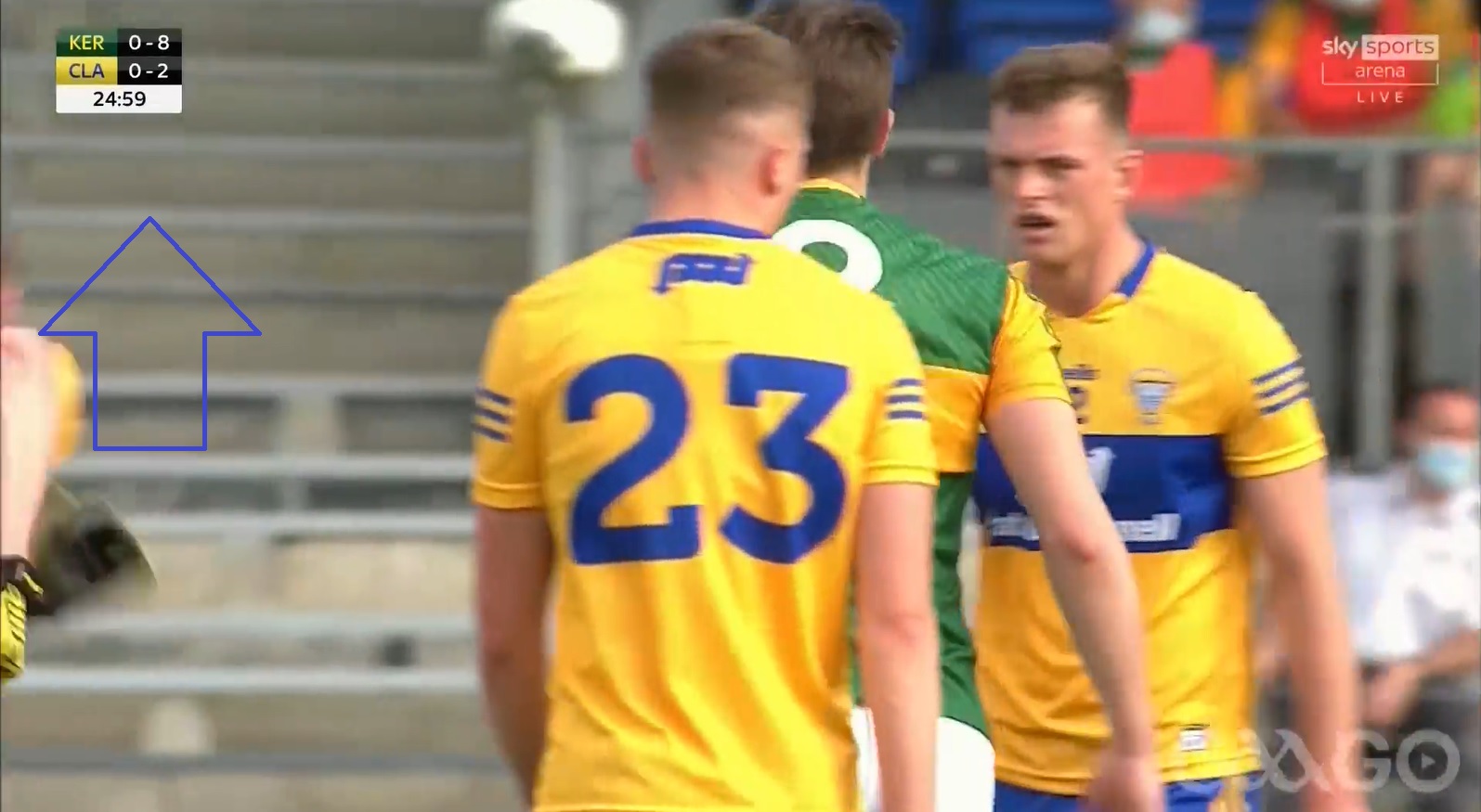 Clare try to body check Moran and hinder his ability to get to the landing zone. 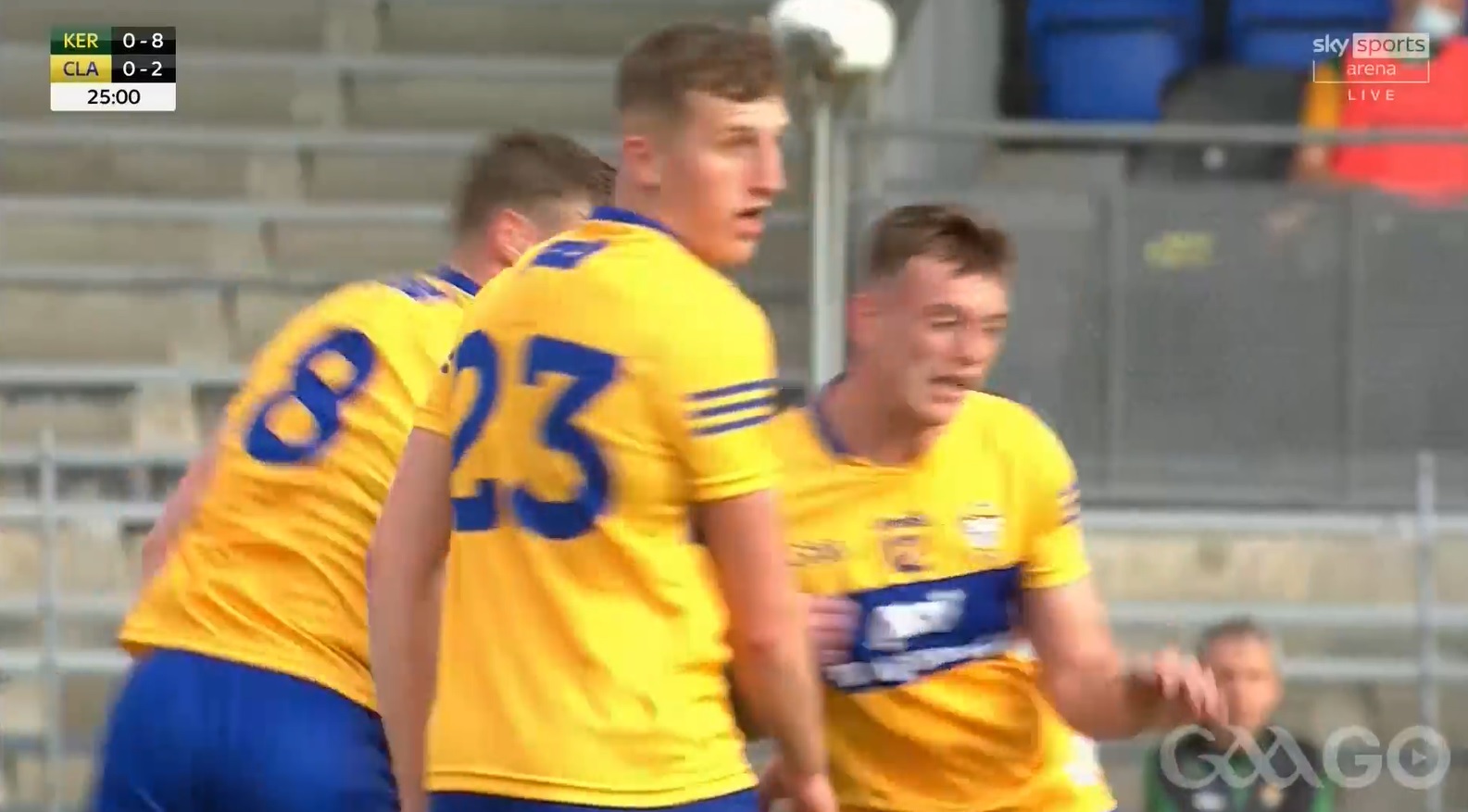 A team sacrificing three players on their own kick-out is a perfect illustration of the damage Moran can do when left undisturbed. On the other hand, he did concede a free and lost a one v one with O'Neill in the first half.

For that Munster quarter-final clash, Moran was not a target on Kerry kick-outs, but that was mainly due to the limited range of their starting goalkeeper. Against Tipperary, Shane Ryan resumed the number one jersey and Moran thrived.

In the latter stages of the first half, Kerry concede a penalty and the gap is reduced to four. The referee pauses play to book Shane O'Connell and David Clifford for an off the ball incident.

Tipperary have time to organise a press. Kerry need possession, so every player clears out and creates space for Moran in the centre. 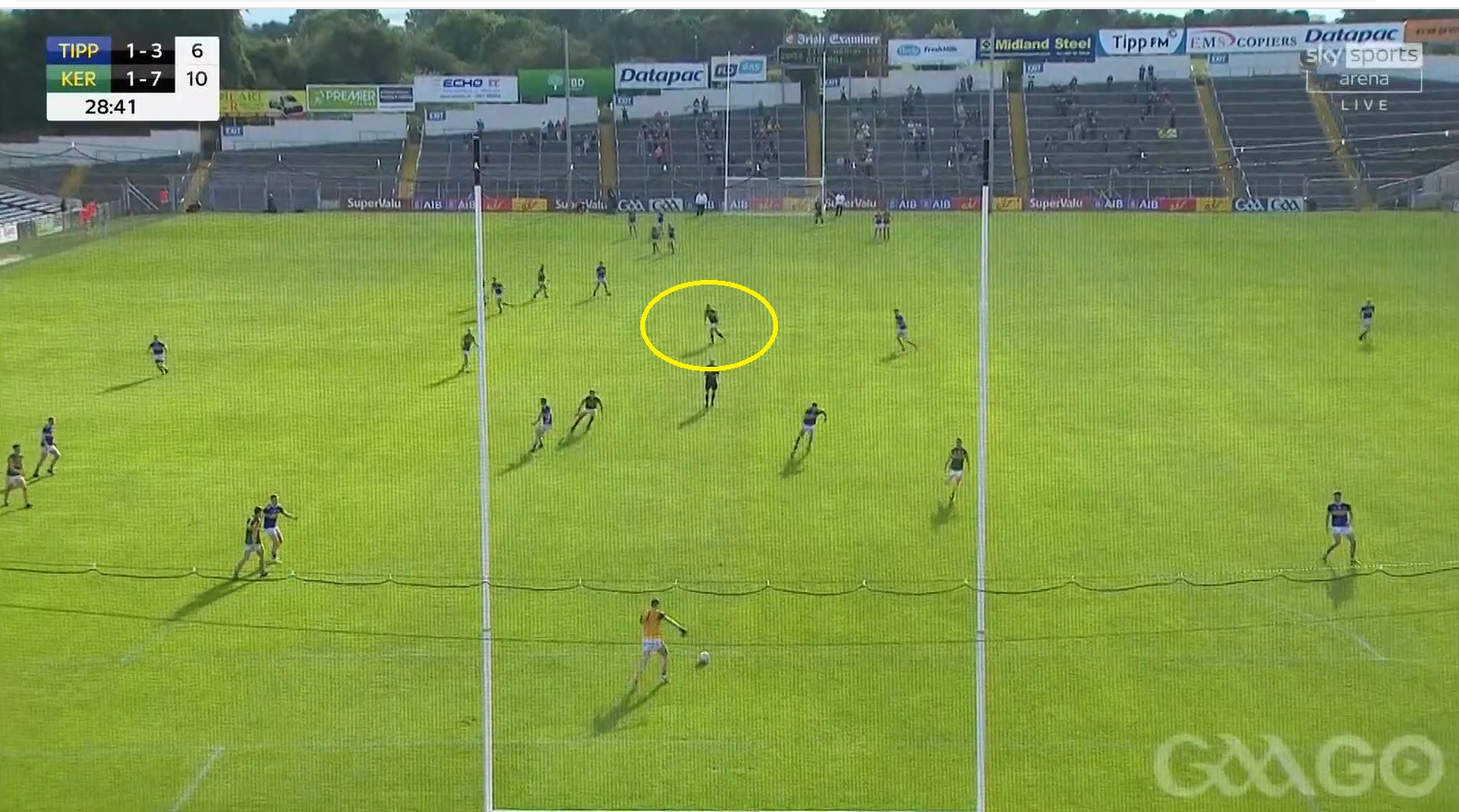 He delivers and claims a mark. 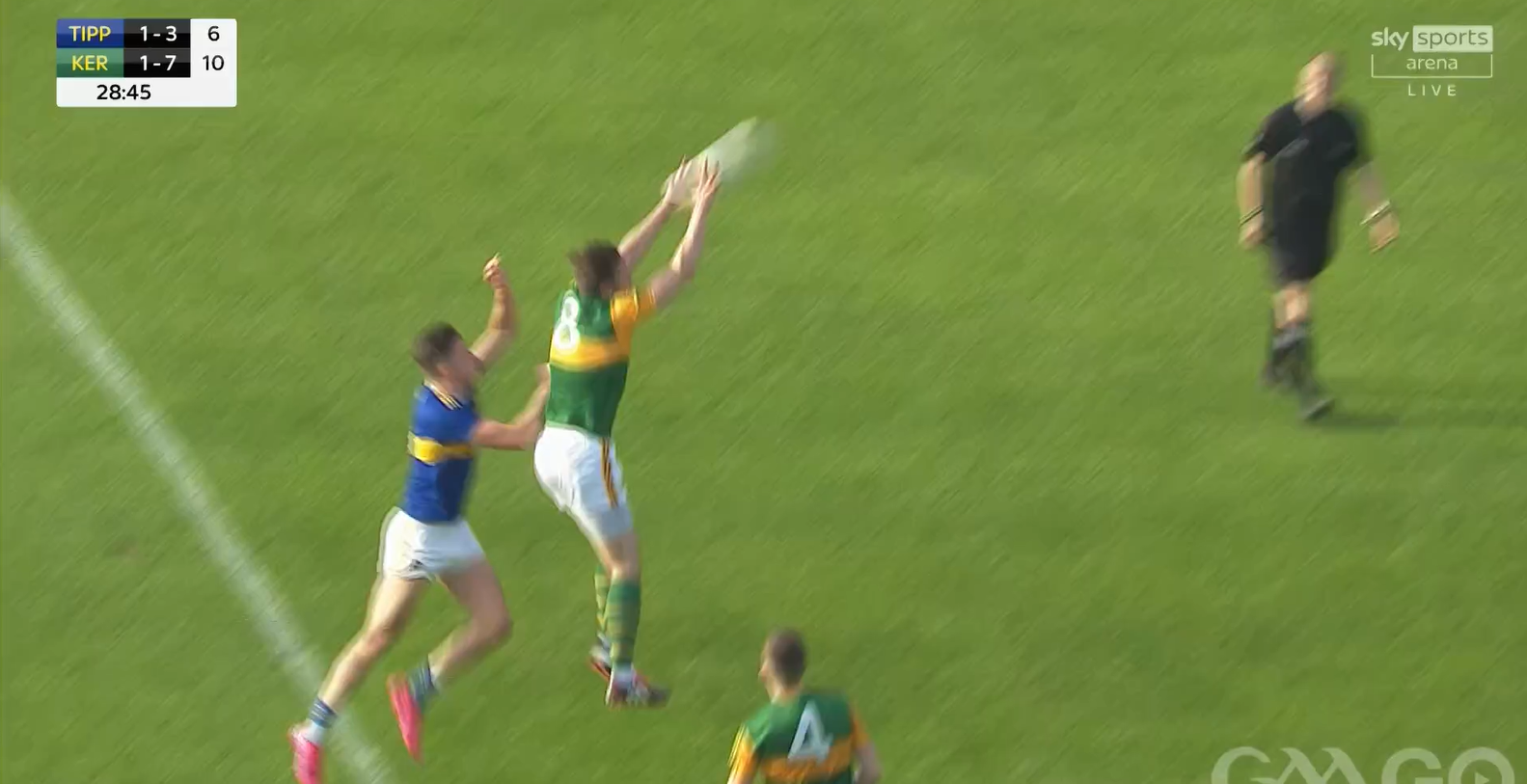 Moran immediately kicks forward to Tom O'Sullivan and Kerry are away. 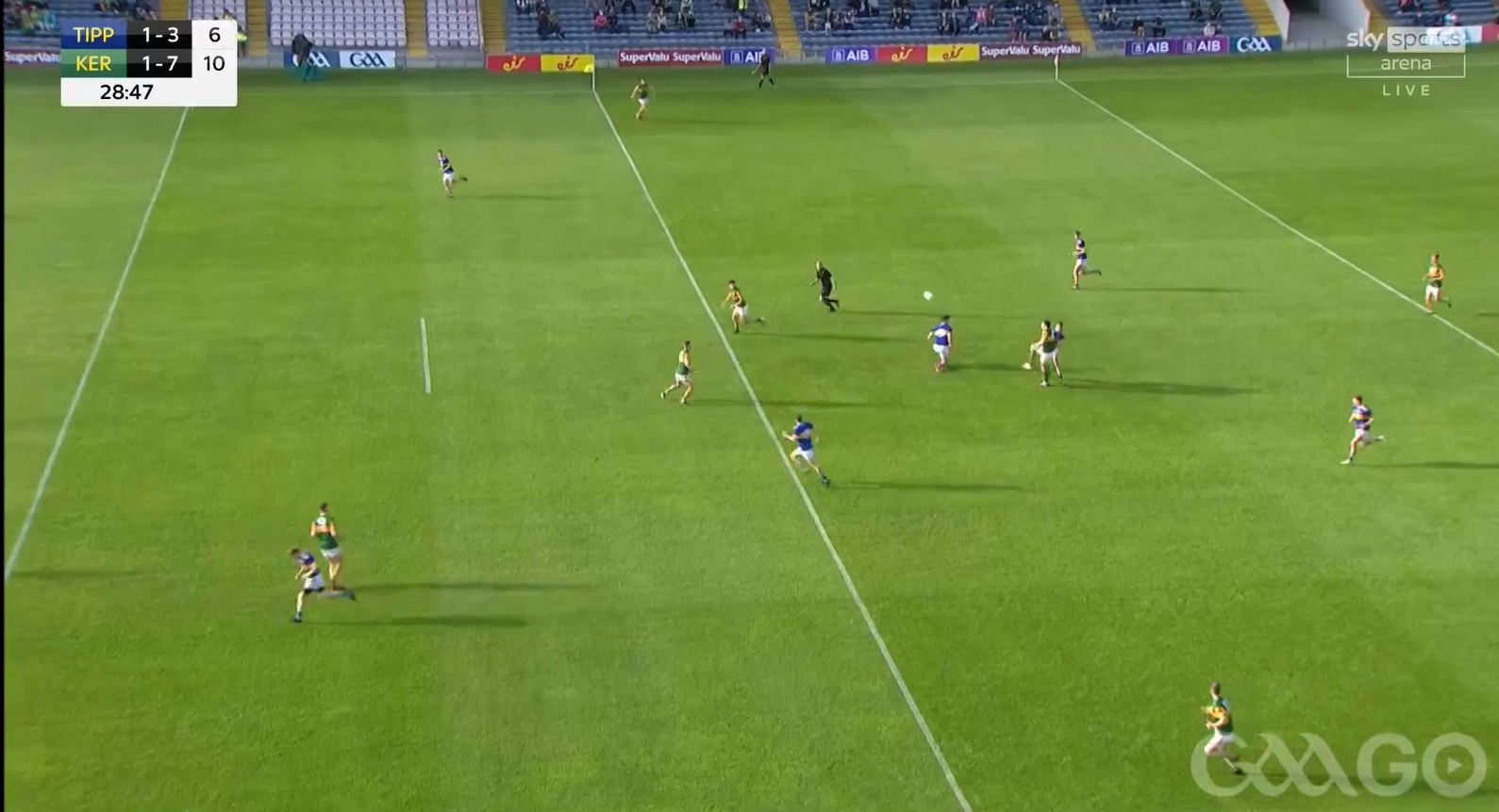 It ends in a Sean O'Shea point. 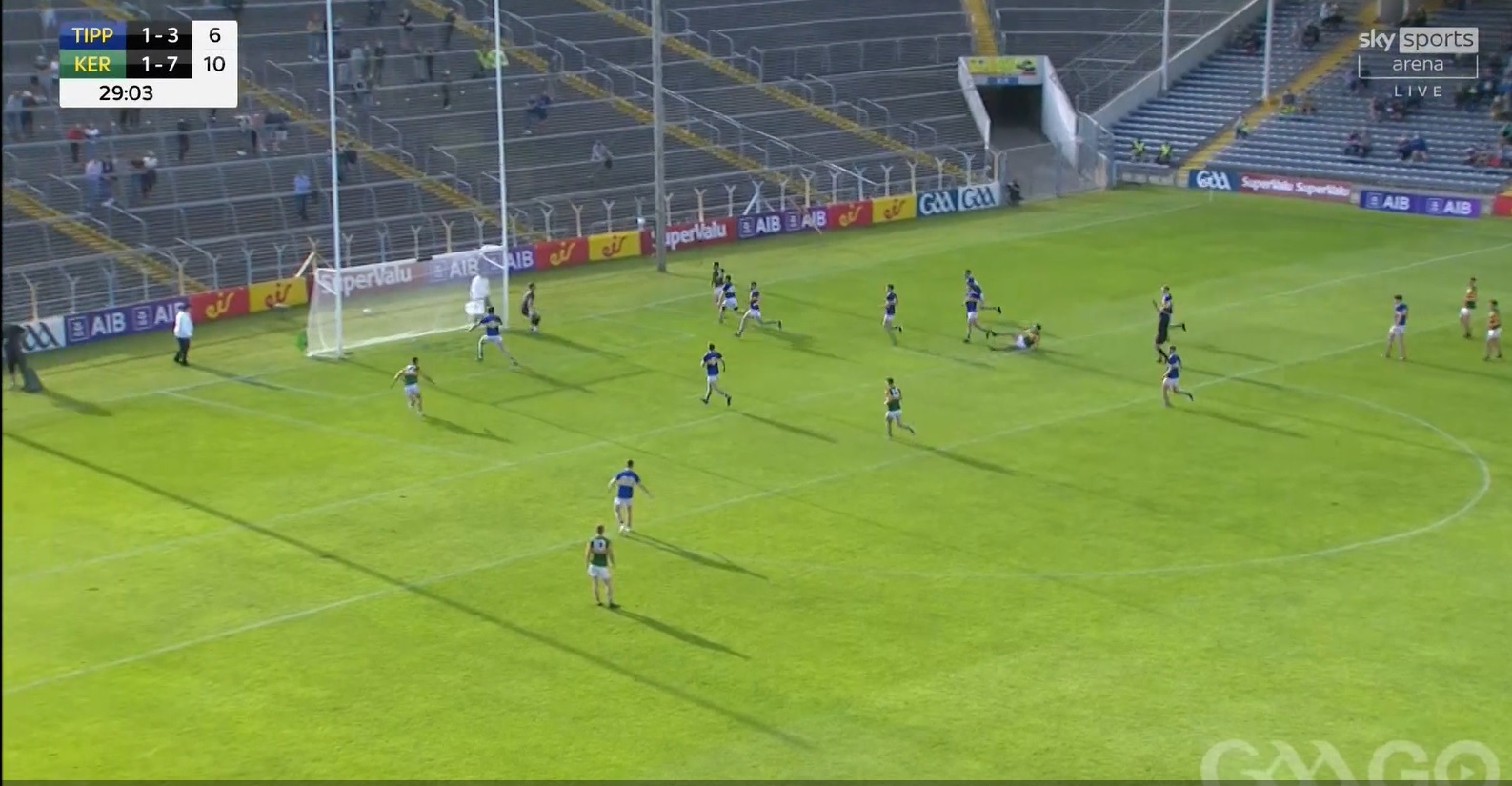 Furthermore, it is not a case of four for two. In the 2019 All-Ireland final replay, Moran, Barry, Spillane and O'Connor all started.

"Diarmuid O'Connor is a beautiful footballer. He glides along the ground. He is starting to get more experience now. He is getting stronger every year and he is just so athletic.

"I thought they would keep him wing-forward for a year and Jack Barry would be in. But Jack Barry got an injury during the league, O'Connor came in and you can't move him.

"He is so comfortable on the ball. He can travel up and down. He is the Kerry midfielder for the next ten years, you'd imagine. It is a great foil for David to have. He can concentrate on fielding the ball and passing off. He doesn't have to be the guy going up and down continuously.

"It is obviously his later years, he can't do it. Now he has someone with great legs."

A partnership worth pursuing.

SEE ALSO: Just How Important Are Hand Signals In The Modern Game? 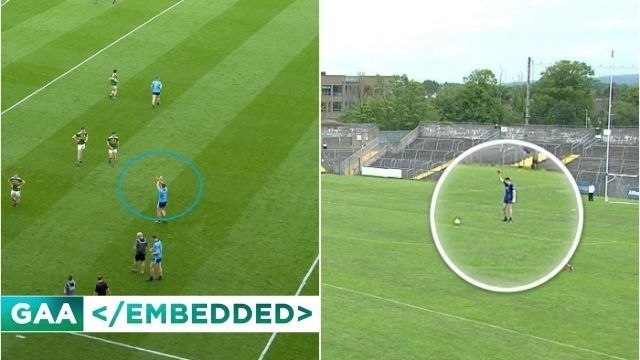 GAA
2 years ago
By PJ Browne
Kieran Donaghy Explains Why David Moran Is So Important For Kerry
GAA
2 years ago
By Maurice Brosnan
What David Moran Did Off And On The Ball Against O'Shea And Kerry's Key Man In Mayo Victory
GAA
3 years ago
By PJ Browne
'You'd Always Be Feeling Ten Feet Tall After Meeting Him Which Is A Special Skill'
Popular on Balls
GAA
14 hours ago
By Gary Connaughton
Watch: Kildare's Daniel Flynn Scored A Frankly Ridiculous Point For His Club Last Weekend
Football
16 hours ago
By Gary Connaughton
Tim Sherwood Thinks Arsenal Signed The Wrong Brighton Defender