"If you think he's good, you should have seen the brother."

That's a phrase we have all heard uttered countless times in GAA circles over the years.

David Clifford has long been touted as a potential transcendent star, with his performance for Kerry at minor level some of the best we have ever seen at that age group. It wasn't a huge surprise to see him immediately step up to the inter-county senior ranks, since establishing himself as one of the premiere forwards in the country.

Not as much was known about his older brother.

Paudie Clifford first came to the attention of many around the country thanks to his exploits at club level, putting in some fantastic performances for both Fossa and East Kerry. Still, he wasn't really in and around the Kerry team until this year.

He has taken his opportunity with both hands.

After steadily building some form over recent months, he was remarkable during their emphatic Munster final victory over Cork this afternoon.

Kerry are Munster champions for the eighth time in the last nine years after hammering Cork by 22 points in Killarney this afternoon 🏆 pic.twitter.com/yx0Ty2GFNG

He may have 'only' scored 0-2 himself, but everything good Kerry did seemed to go through the forward. He was popping up all over the pitch to impact the game with his playmaking, with the team's third goal the perfect example.

The way Clifford plays with his head up is a huge asset to have in dangerous areas of the pitch.

Adding someone to the forward line who has the ability to supply the ball to the likes of David Clifford and Sean O'Shea takes a huge burden away from those players. It should allow them to be even effective than they have been in the past.

He will be a key piece as Kerry enter the All-Ireland series.

Seán O'Shea is absolutely lifting. I think the arrival of Paudie Clifford onto the scene, and obviously he is playing well in his own right, but he has freed up O'Shea.

Over the last two years, the over reliance on O'Shea to be the outlet at centre forward meant he was having to sprint 40 or 50 yards with a man on his back, win the ball, then either play it in or shoot. It was a lot of work for one man.

Paudie comes out, has energy to burn and is an intelligent footballer, it takes the pressure off O'Shea to be the sole ball winner there.

That is something that will become increasingly important as Kerry face better opposition over the remainder of the summer.

The viewing public were certainly impressed with his showing in Killarney.

He has been quality in this half but Paudie Clifford was brilliant even when it looked ropey enough earlier on. A bit of class and bite that this team needed.

Paudie Clifford is just so, so, so good to watch.

Paudie Clifford will be the difference for Kerry this year in getting over the line in the All Ireland, ultimate team player. Brothers not bad too mind you

Give Paudie Clifford his all star now. Playmaker supreme.

Ah lads Paudie Clifford has had some game.

Speaking on The Sunday Game, Tomás Ó Sé said that we should have seen Clifford in the Kerry team long before this year.

I think he should be in there the last three years.

Paudie Clifford was playing in Kerry county championships with East Kerry, who are the dominant team in Kerry for the last few years, and he was doing exactly for them what he is now doing for Kerry.

He was far and away the best player on the pitch today. Even in the first 20 minutes when Kerry were struggling, he was the one beacon that was still firing. He is a great bit of stuff.

He has that of steel, that bit of class in him. He can pick out a kick pass from way out, he creates more than anything but you can catch him anywhere, even his own defence. He has a low centre of gravity, takes it out of trouble any time he wants.

I do think he has been overlooked by that management the last three years. This year he has kicked on and nearly every game he has been man-of-the-match.

With an All-Ireland semi-final against Tyrone or Monaghan on the horizon, Peter Keane will be hoping he sees a repeat performance from the player on their next day out. 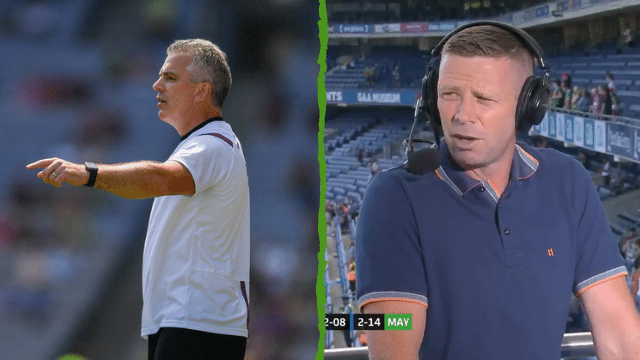