It was Con Houlihan who said that Dublin goalkeeper Paddy Cullen desperately scrambling back towards his goal as Mikey Sheehy’s lobbed effort flew over him during the 1978 All-Ireland final looked ‘like a woman who smells a cake burning.’

Jack McCaffrey dashed towards the other end before his goal in the All-Ireland final like the young fella who was supposed to be monitoring said cake. His starter gun was a kick-out. It began with Stephen Cluxton’s strike off the tee towards the Hogan Stand. By the time Niall Scully fed him the ball, the finish line was well in sight.

Muzzling the 2015 player of the year was never going to prove an easy challenge. The man tasked with it the last day out was Gavin White. Yet gone are the days of one vs one battles and Kerry's approach has to evaluated collectively, not individually. 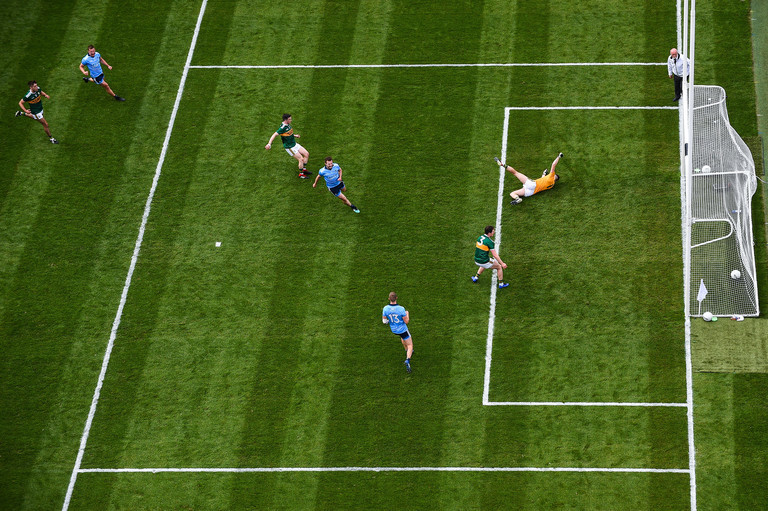 Their brain trust are renowned for their extensive opposition preparation and there is no doubt the tape of Dublin's destruction of Mayo in the All-Ireland final would have been extensively explored.

Come the final O'Callaghan had a single point. Mannion hit two. Fenton didn't score. Part of that was down to their dedicated markers in Tom O'Sullivan, Tadhg Morley and Jack Barry but those soldiers were well supplemented by a shrewd system.

Kerry flooded players into the spaces where Dublin's talisman usually thrive. Paul Murphy choked up the inside forward duo while Adrian Spillane and David Moran assisted in denying Fenton supply. It was strategic and systematic.

Part of Dublin's power is their ability to orchestrate such space. For McCaffrey's goal, both inside forwards saw him taxiing on the runway and immediately reacted to make space and pull their men out of the way.

Dublin make it look so simple as Cluxton's free is caught by Howard and within seconds Jack McCaffrey put the ball in the net.

The template was set by Mayo's Paddy Durcan, who held McCaffrey scoreless and finished with 0-3. The only problem is that Kerry do not have a Paddy Durcan.

Meath midfielder Shane McEntee is a man who was in close quarters with both sides this year, having played Dublin in the Leinster final and Kerry in the Super 8s as well as a challenge game. 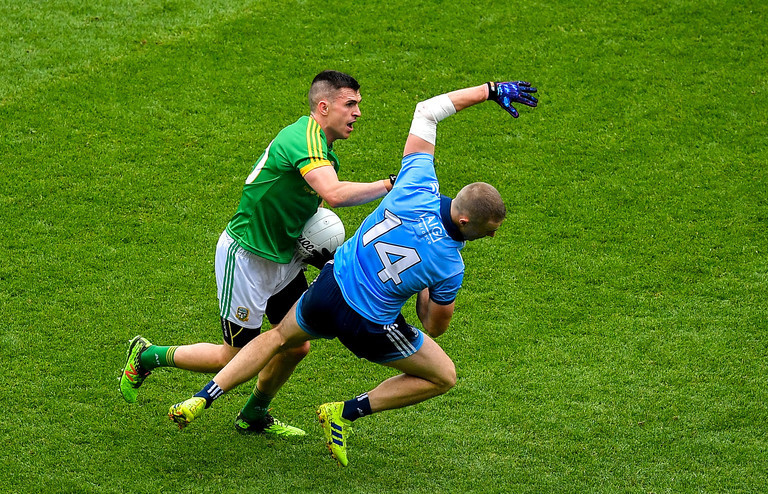 He watched with interest as McCaffrey landed 1-3 with Gavin White supposedly tagging him. But in the same way as Jack Barry v Fenton, White did not sacrifice himself and track McCaffrey religiously.

"The talk from Kerry was that Gavin White was a renowned half-back who could play wing forward to man-mark Jack McCaffrey. He didn’t mark him as such."

That is because it took such athletic capacity for Durcan to have an impact on both sides of the ball. It is why the Castlebar Mitchels man is an All-Star favourite. He is McCaffrey's equal and was treated as such.

Even when Jack McCaffrey laid off the ball and went on one of his typical drives forward... 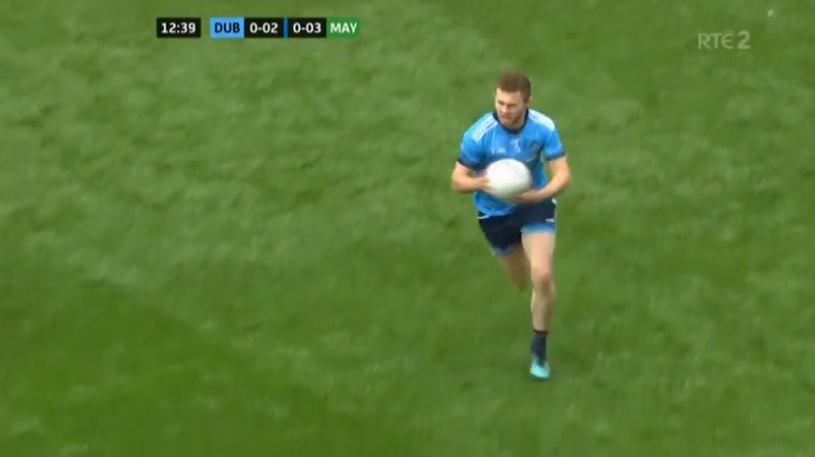 Durcan was able to match him stride for stride. 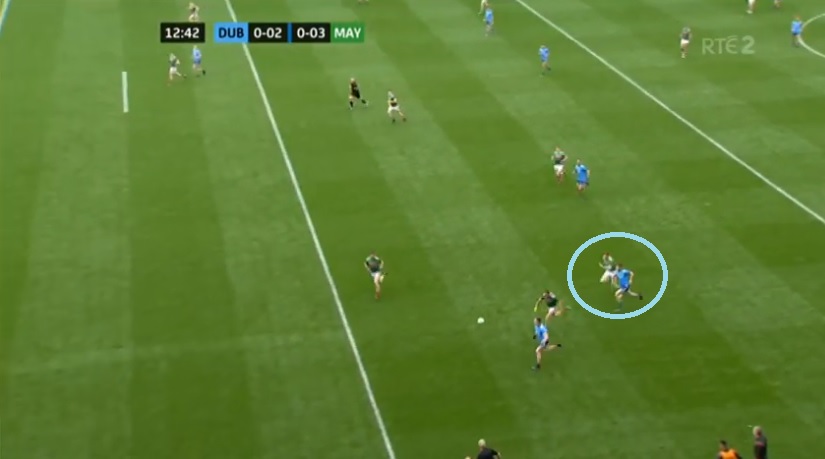 Durcan constantly tagged his man and stayed goalside when defending. 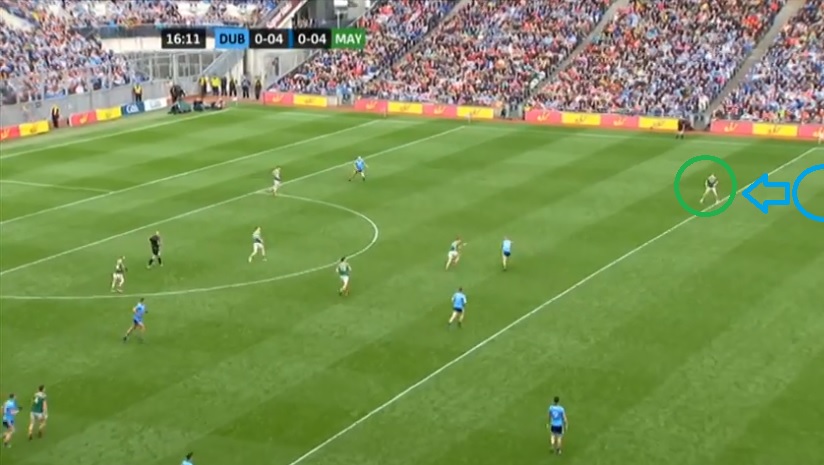 After all that effort, Durcan was still able to find five yards of space and break forward. 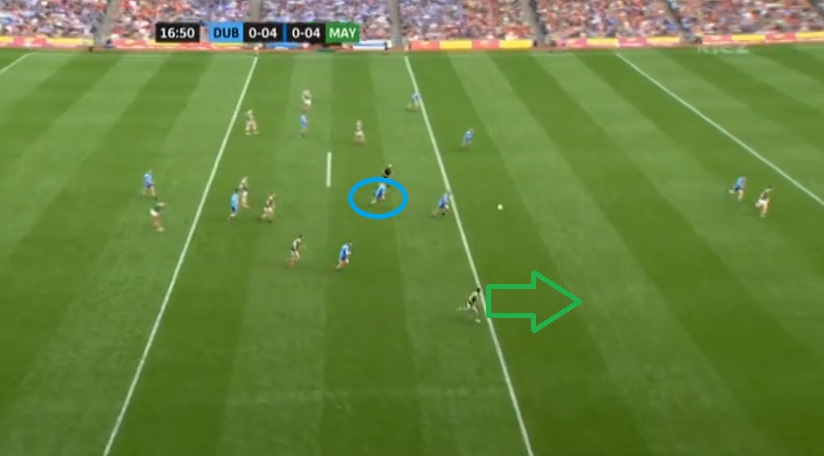 McCaffrey had to sprint back and try to defend but he couldn't catch up and Durcan scored. 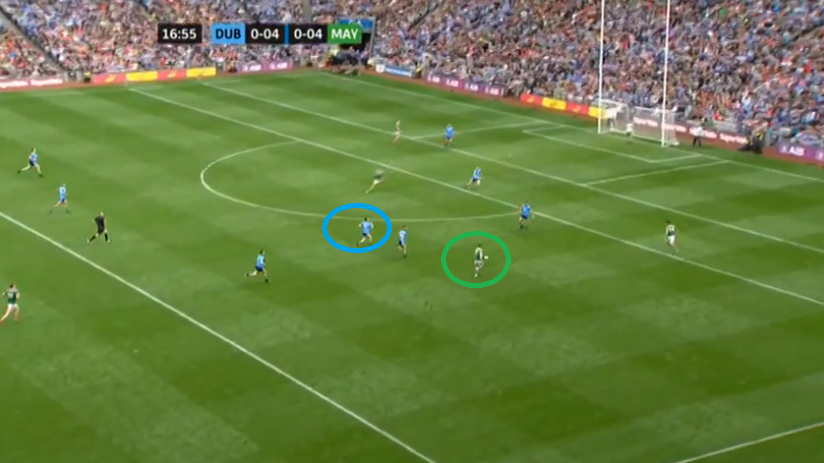 For McEntee, sacrificing a player purely to cancel out McCaffrey isn't a viable option.

Is anyone in Kerry's team going to stop Jack when he gets a run like that? Is there anyone in that team who has that genuine pace to track Jack’s run for that goal? It’s a hard thing to do. I don’t think you stop a score like that regardless by tracking him.

He will make those runs but maybe you punish him the other way. He’s well able to defend as well but at least you’d keep him occupied that way. I think you try get a really dangerous forward on him.

Donnacha Walsh over the years had some decent success on him. He was always involved in an attacking sense and it would ask questions of him. I know Jack has spoken of how his defensive side has come on and it is something he is proud of. He’d try to demonstrate that if you ask him the question.

Last time out, McCaffrey was rarely required defensively and only had three touches within his own '45. It takes a phenomenal output to do what Durcan did. Kerry's closest thing is Stephen O'Brien, a man who could track those runs while finding joy the other way as well. 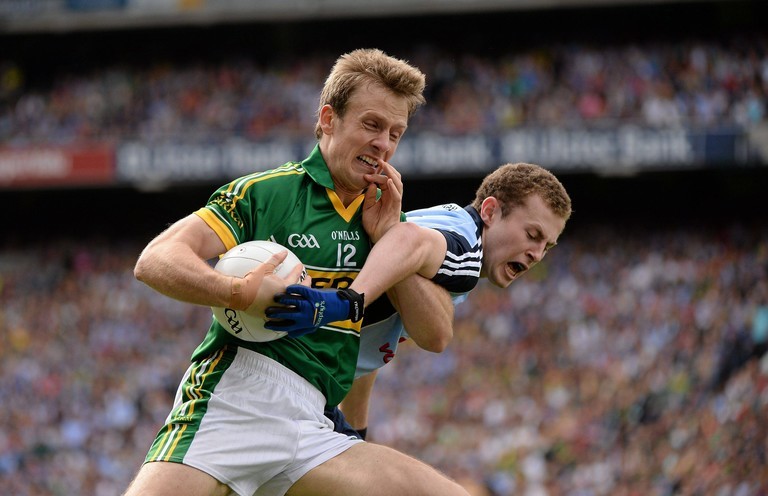 Shane McEntee feels Peter Keane's outfit can't become preoccupied with stopping Dublin. At their best in the final, Kerry did what Kerry do. It was intelligent, fast football centered around supplying a talented array of forwards.

They need to remain balanced while knocking Dublin out of stride. It is about waging war without burning themselves out. Jim Gavin's side will pose several questions, and while Kerry need to answer them they need to pose some of their own as well.

In McEntee's experience, one man is key to that.

He ended up on Conor McGill who is well able to mix it physically and I remember one time watching McGill go at him and he just couldn't budge him. He brings a huge presence. That impact off the bench could huge.

You can listen to our full discussion on Jack McCaffrey and Tommy Walsh on this week's Balls.ie GAA podcast here.

GAA
2 hours ago
By PJ Browne
Quiz: How Well Do You Know The Inter-County GAA Weekend?
Previous Next