Few teams dominate like the Kerry minor footballers dominate. So dominant are they, one might think they would grow tired of winning. But after completing their 27th consecutive championship win at the weekend, beating Clare 3-21 to 1-7, they don't look the least bit satiated by their successes.

This is an entirely new crop of players of course, especially with the grade moving to U17 level, but it still doesn't diminish the fact that there are many, many young lads who have not lost a game in the green and gold of their county.

The Kingdom are now chasing a fifth successive Electric Ireland Minor Football Championship title after securing a sixth Munster crown in a row. Such a record is both a good thing and a bad thing; it instills a winning mentality, but sometimes you learn more from one defeat than you do twenty wins. One wonders if they are truly prepared for the step up to senior level, although it's done David Clifford no harm this season.

The lopsided result means the long wait for a title in Clare continues, their last coming in 1953. Manager Maurice Walsh told Clare FM that the Banner County's performance was not reflected in the scoreline, but they will have to prove their worth in the upcoming quarterfinals.

Here are the nominees for Player of the Week:

The Kingdom were firing on all cylinders at Pairc Ui Chaoimh on Sunday, with eleven different scorers putting Clare to the sword in the Munster MFC final.

Standing out among the crowd was Paul Walsh, and not just because of his unique hair style -- he scored 1-7 while contributing to Kerry's two other goals in a stellar performance. 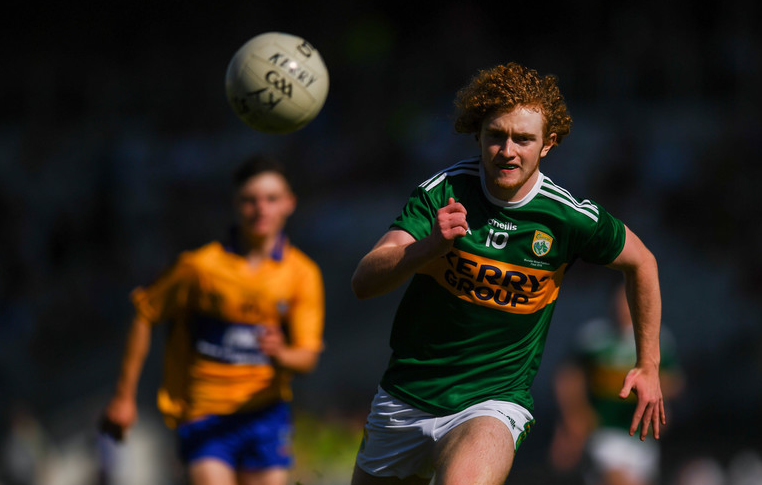 The reigning champion's first green flag came about from a Walsh free that came back off the post and into the grateful arms of Dylan Geaney. The same duo would combine for the second goal, while Walsh rounded the score out with a goal of his own.

With 1-3 from play, few individual performances will match that of Paul Walsh's as Kerry captured a sixth consecutive provincial crown.

The Rossies began as they intended to finish, book-ending a terrific win over Leitrim with goals at either side of the whistle.

James Fitzpatrick finished the scoring with the goal that his performance deserved, as Roscommon were 18 points the better than their rivals.

Adding three points from play to his tally, Fitzpatrick can be fully satisfied with his contribution on Saturday.

Fitzpatrick and Roscommon will be hoping they can use the momentum of such a victory in their quest for a place in the Connacht MFC final.

When Mayo needed one of their boys to step up to the plate, Ultan O'Reilly was there to answer the call.

Sligo were always second-best to their counterparts, but it wasn't until the Erne Gaels player scored the first goal of the game that Mayo properly pulled away. That score killed off any belief the underdogs might have had of pulling off a shock result.

It's a cracking day for a game. Throw in for our U17's is 12.30pm. #mayogaa #gaa pic.twitter.com/jRSgUDyebu

The second half ended up being a procession for the team in green and red, running out 2-18 to 0-10 victors over the Yeats County.

Aside from having one of the best names in the Electric Ireland Minor Football Championship, Ultan O'Reilly is a fine player to have in the Mayo ranks, sprinkling his performance at the weekend with some nice points from play.