There was a revealing moment early in the first half of the Munster final in Páirc Uí Chaoimh last Saturday.

Cork were working the ball out of their own half and Kerry wanted to get the ball back. As the Rebels moved down the sideline, Kerry midfielder David Moran got a hand in and held up play. 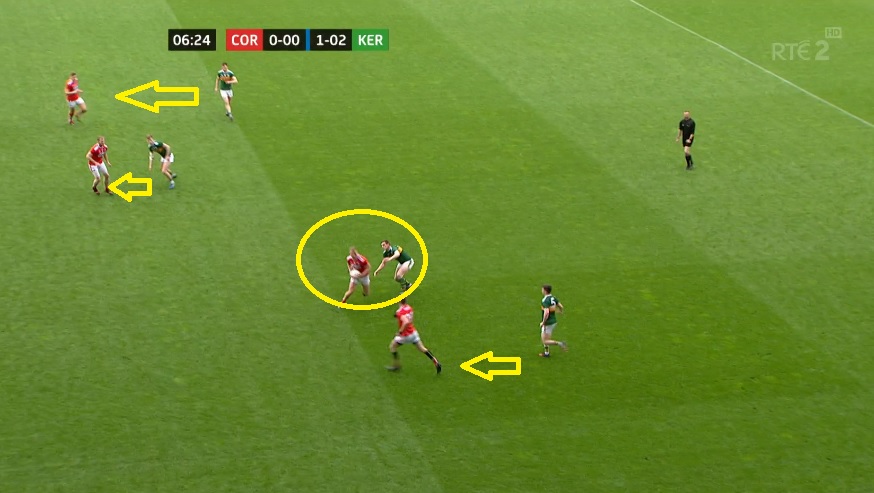 After Moran gets hands-on, the instruction comes: "Squeeze!" Stephen O'Brien races in. 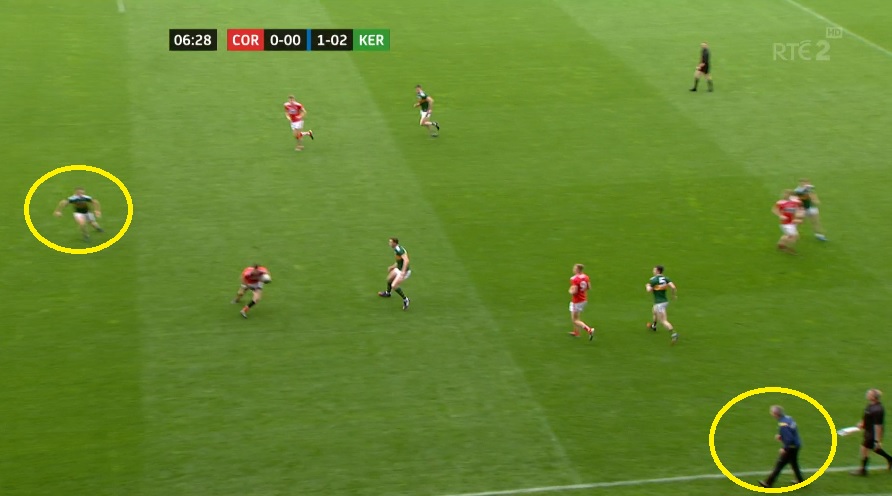 They both press together. 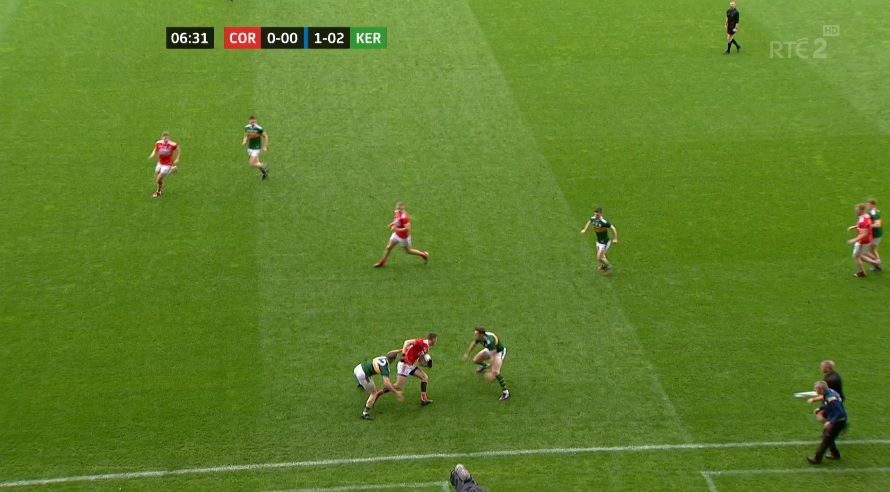 They win the ball back and launch an attack. 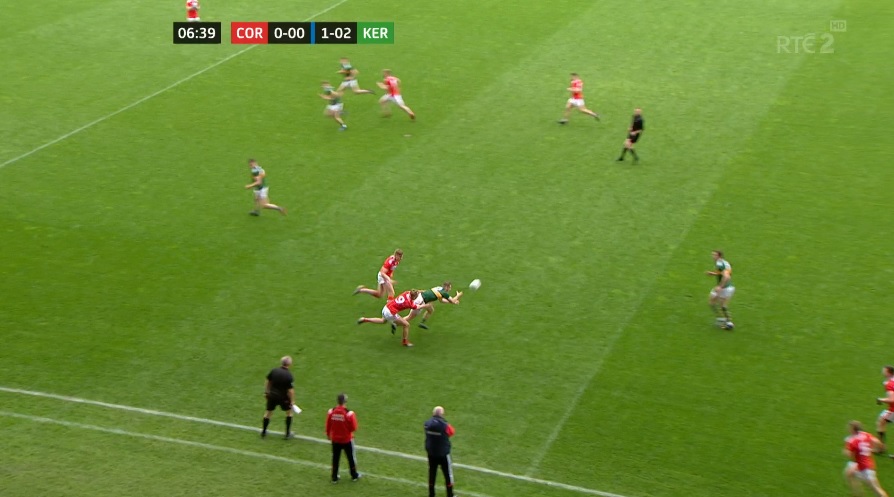 It was an instruction in line with their current system. An expectation placed on their forwards to try slow down play or turn the ball over high-up the field. In the 30th minute, Kerry once again pressed high through Sean O'Shea and it ended in a score for David Clifford.

Cork try work the ball out. 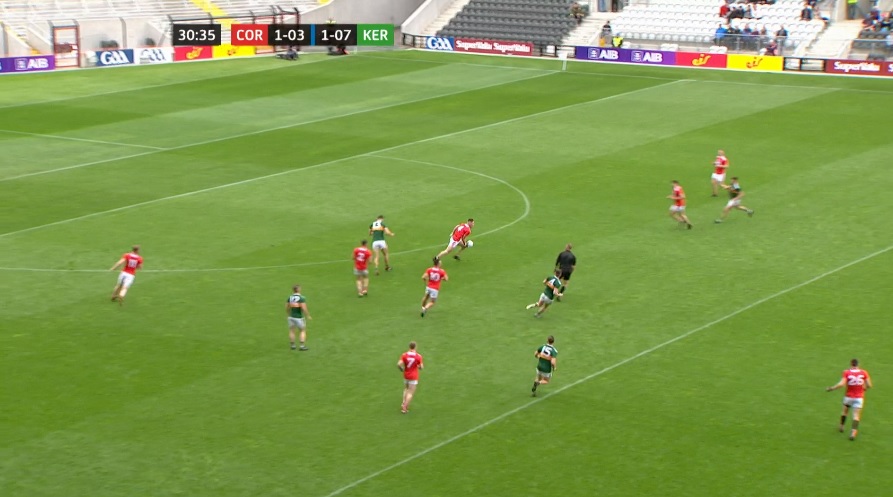 Kerry press high and Sean O'Shea gets hands on. 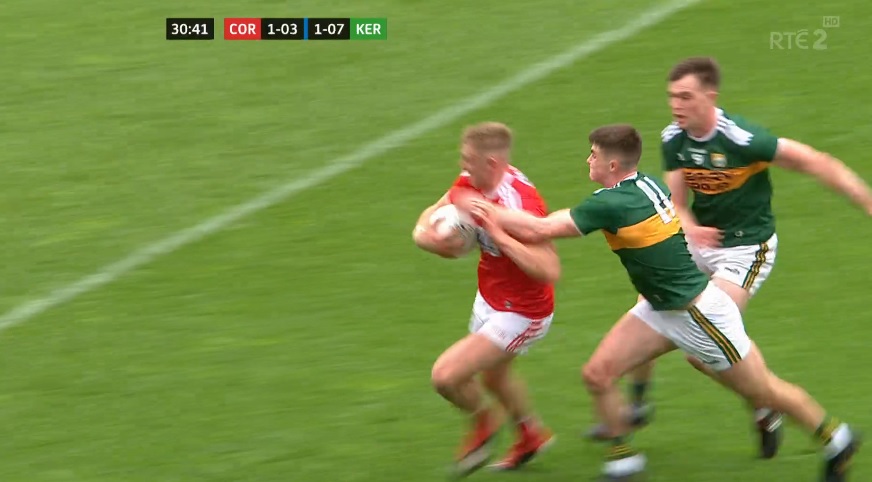 It breaks to David Clifford who kicks a score. 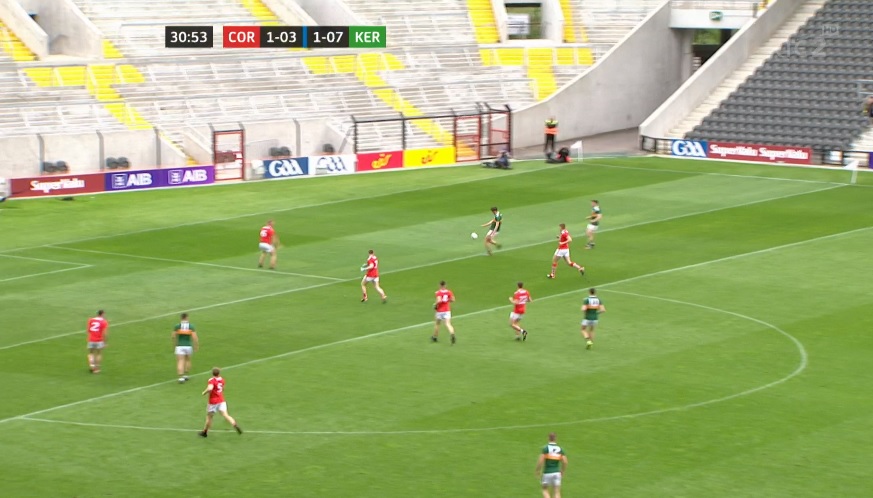 The alternative approach can be seen with Donegal. When they lose the ball in attack, they stand off and filter back to the '45.

Cavan regain possession and Donegal start to filter back. 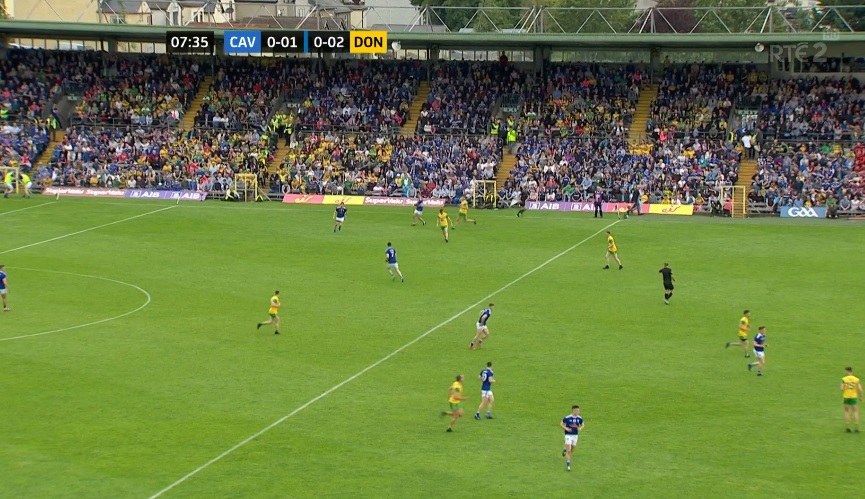 Cavan easily work the ball out of their half. 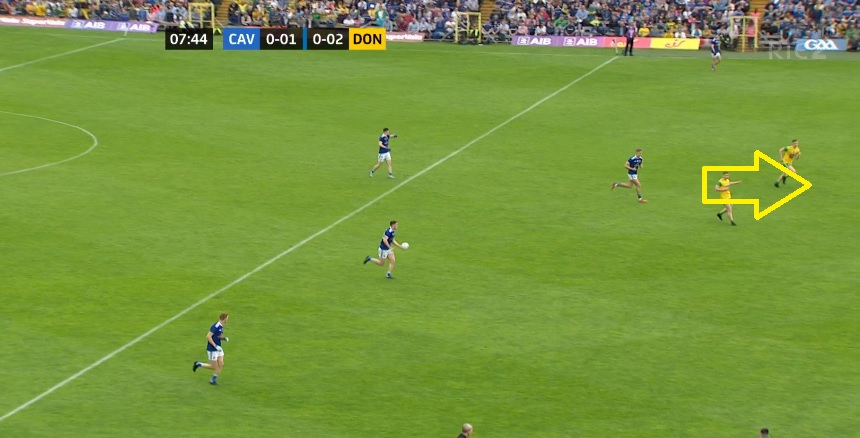 Donegal wait in their own half for Cavan to attack. 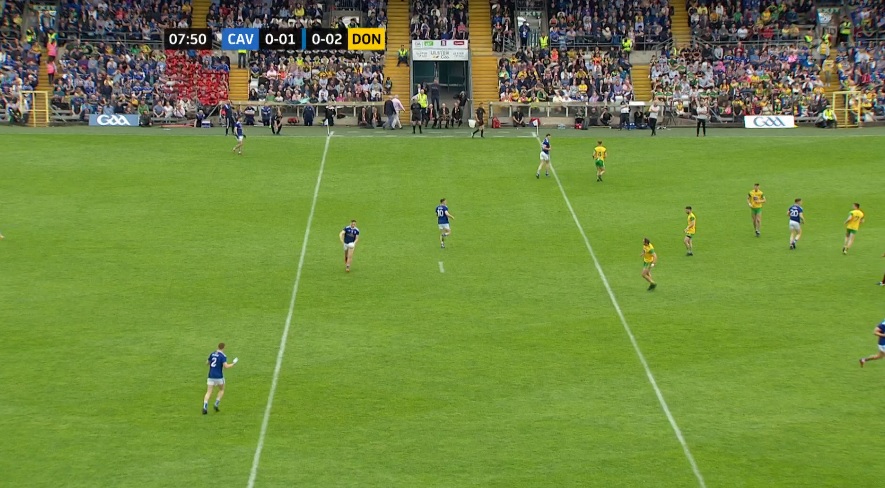 The choice facing teams now is clear; you can engage a team up high or retreat to your half and wait for them to engage you. Kerry prefer the former, as do one other high-profile inter-county side.

For some time now, inter-county outfits have had set targets for key aspects of the game: kick-out success, scores from play, conversion rates etc.

During James Horan's first stint with Mayo, he introduced a new demand. A target for turnovers from his forward line. It was a specific number from that unit of the team. Horan needed his forwards to be effective on both sides of the ball, offensively and defensively. To do so he needed a high-press. 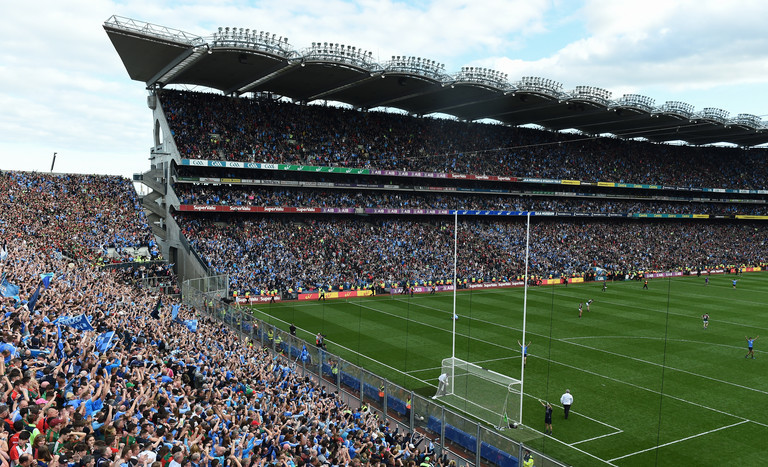 A high-press in Gaelic football is unlike any other sport. There's very little incentive to do it. It's easy to overcome because of the space available, an extra man in the form of a goalkeeper and the ability to go over the top with a kick pass as well as side to side.

A man well familiar with that expectation is former Mayo star Enda Varley. Speaking to Balls.ie, the current St. Vincents club man explains there are pros and cons to such an approach.

It works to a certain degree but getting down to the final two or three teams, Mayo have been caught by it. We individually have the six best backs in the country along with Dublin in terms of skill-set and athleticism.

The high-press is great in that if you turn the ball over up high there's less distance to the goal and way more chance of a goal. It allows your best attackers stay up the pitch.

Kerry are playing that system right now but they have a defence that needs protection. A Cork team scored three goals off that. I guarantee they'll rectify that come the Super 8s. The problem with a high-press is once a player is beat, if someone losses a man, they have an overlap for the rest of the attack. Teams are so good now that they will sniff that and go for the jugular.

It's risky. You will give away goal chances. Down had three on Saturday. It's a high stakes game. James (Horan) believed in it and Kerry seem to. There's a middle ground as well. If someone is not involved in the play or isn't helping the press, they need to try and get back to cover their defence.

The pro is that it ensures an extremely talented forward line are not pulled out of place retreating to the '45. Even if a high-press does not force a turnover, it can slow down play and allow the defence to get organised. 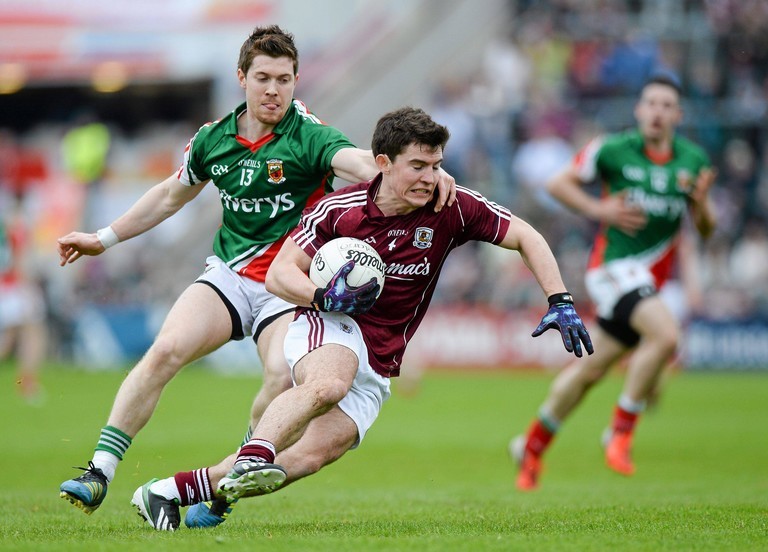 But as Varley outlines, there is a downside as well.

"The benefit of going to the '45 is that it's less likely to go wrong. You can set there as a team. One unit. Show them the sideline, you compress the pitch massively and it's easier for your full-back line. Less can go wrong."

Most teams will press up on their opponents kick-out but from play, they will filter numbers back behind the ball. For Kerry, such an approach would force David Clifford, Paul Geaney, Sean O'Shea or Stephen O'Brien to contribute more in defence and less in attack.

Instead, they gamble. They hope a high-press will have enough success and trust their attackers to outscore any opposition.

Writing in the Irish Examiner last weekend, Former Kerry manager Eamonn Fitzmaurice explained he had been building something which he never got a chance to display.

Because of our no-show against Galway in the Super 8s we never got the opportunity to road-test our tweaked system on the team it was designed for —Dublin.

The last time Kerry played Dublin, during the league, they played Paul Murphy at centre-back and five of the six forward who started on Sunday. That day Kerry scored 1-18. On Sunday they scored 1-19. 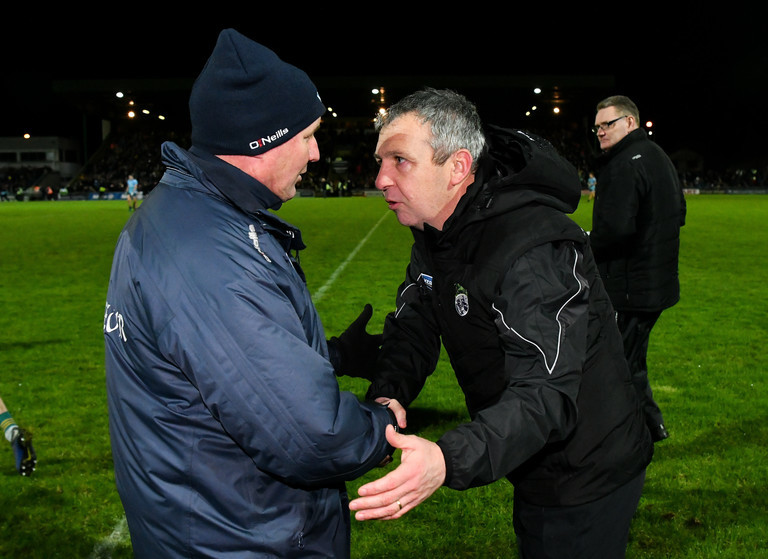 On the other hand, that day Peter Keane's outfit conceded 2-14. On Sunday they conceded 3-10.

Great attackers, loose defenders, that's what their system is built around. You'll score some but we'll score more. Kerry's mantra.