Kerry’s Paul Walsh has been named the Electric Ireland Minor Footballer of the Year.

The Brosna clubman capped a fine year with the award having secured an All-Ireland medal last month. He was also picked at wing forward on the 2018 Electric Ireland Minor Football Team of the Year. 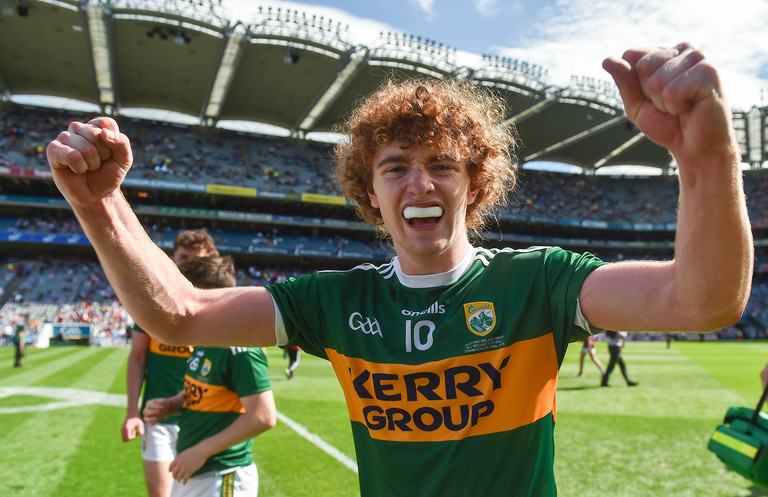 Walsh kicked four points during their final triumph over Galway in a typically energetic performance. He is a member of Kerry's latest all-conquering underage prospects. Under the astute leadership of Peter Keane, he thrived in the half-forward line. His ability to carry the ball proved crucial for the Kingdom's offensive unit while his pinpoint accurate left foot ensured he routinely racked up high scores, including an astonishing 1-07 against Clare in the Munster final.

Walsh's expertise from the placed ball proved crucial in their semi-final victory against Monaghan. Having led by six, Kerry were stunned as two late goals and a point put their Ulster rivals in the lead. However, late in extra-time two frees from their distinct wing forward ensured the champions overcame the challenge.

With new management on the horizon for the senior panel, the Kingdom can rest assured that their production line is in fine kettle with Walsh's accolade the latest proof of that.

GAA
1 year ago
By Gary Connaughton
In Pictures: Electric Ireland GAA Minor Star Awards Take Place In Croke Park
GAA
1 year ago
By Arthur James O'Dea
'We Were All Just Finishing Our Confirmation When It Started': How The Kerry Minors Made GAA History
GAA
1 year ago
By PJ Browne
The GAA Obsessive Behind Kerry's Incredible Minor Team
Popular on Balls
The Rewind
57 minutes ago
By Gary Connaughton
Lidl Will Have Electric Scooters Available In Store Next Week
Football
1 hour ago
By Sean Meehan
Here Are 5 Stats That Showcase Just How Unbelievable Gianluigi Buffon's Career Has Been
1