Gaoth Dobhair No Longer Wondering If They're Good Enough

"Just to be here instead of looking on, it's a bit strange this year but it's good," tells Kevin Cassidy.

"At this time of year, we're normally looking on at teams and kind of probably wondering and thinking that they're probably better than we are and we're never going to get there."

In December, Cassidy's Gaoth Dobhair side became the first Donegal team to win the Ulster club football title since St. Joseph's in 1975.

The 38-year-old believes that the victory against Scotstown - which sets up this weekend's AIB All-Ireland Club Football Championship semi-final against reigning champions Corofin - could be a breakthrough moment for Donegal club teams, one which will instil a belief that they are just as capable of winning titles as those from other counties.

"I remember seeing Slaughtneil falling and saying to a couple of my close mates who don't play football, 'There's another big one gone.'

"I remember watching the Dublin county final with Kilmacud, I was watching the players and thinking, 'Jeez, are they that much better than us?' You start to wonder then. You notice what's happening around you. It's a pity Corofin didn't fall against Mountbellew!"

Celebrations, well-publicised by themselves on social media, followed the win over Scotstown.

"We'd worked hard up until that with the county final and also when the Ulster happened, it was pretty full on," says Cassidy.

"If you weren't training, you were recovering or you were doing rehab. So honestly to get the first Ulster title was massive for us.

"We really, really enjoyed it and it was great to know you didn't have to half watch yourself because you'd a game down the line. You could let loose, we knew we'd enough time to get back at it then again." 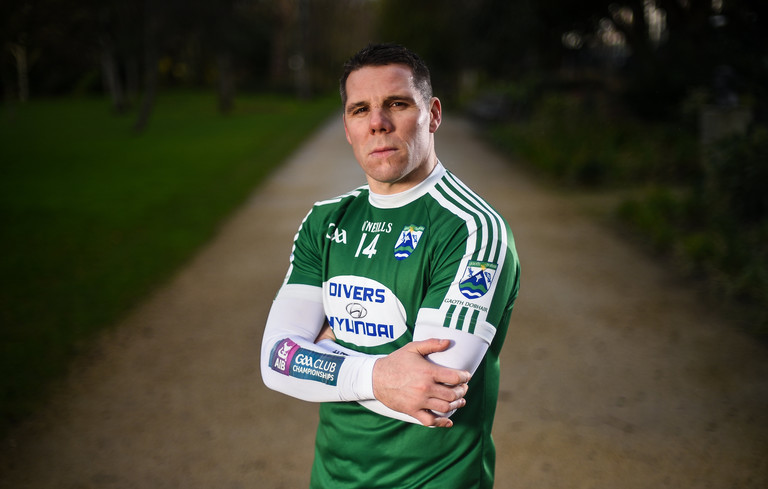 12 weeks - undoubtedly too much time - has been the gap between the Ulster final and Saturday's game against Corofin. They partially filled it with three or four challenge games to prime themselves.

We took two weeks off after the Ulster final, just completely, collectively. People did their own wee thing but we went back training two weeks after.

We kept going during Christmas, we trained hard during Christmas and still at the same time retained the balance: we let the lads out here and there for nights out and stuff.

But since then it's been pretty much, everything's been focused on Corofin.

The club has ten players based in Dublin. "We kind of let them at it," says Cassidy.

"The kind of lads they are, they’re not laid back. They keep themselves in good shape, there’s no worry about them not committing, or going out, nightlife or any of that stuff. That’s no hassle.

"They come home every weekend and we train every Saturday and Sunday. The last night, we met in Omagh, which is halfway, because we just wanted to nail down a few things tactically before this weekend because time is short."

The north-west Donegal Gaeltacht community suffered a tragedy late last month when four young men died in a car accident. Among them was Mícheál Roarty, a member of the Gaoth Dobhair club.

"From going from the highest you can be to obviously getting knocked, it's a real low," tells Cassidy, who knows that he and his team cannot turn this campaign into a crusade for the friend they called 'Roycee'.

"We have to try to pick things up again but that's life. It can throw things at you but you just have to deal with them."

Gaoth Dobhair's panel is one packed with young talent. Last year, nine of them won the Ulster U21 Club Football Championship.

"A couple of them are in St Pat’s doing teaching and different things. Outside of football, what’s good about this group that came through, there’s about ten or 12 of them that came through, they’re very grounded.  They’re level headed. They know what they want to achieve in life and different things. So they’re very easily managed and it’s great for our club to have that coming.

"It’s just about telling them that, obviously I hope they go on and I’ll be standing watching them in Croke Park for years to come, but it might not happen ever again. When you are here, you have to make the most of it. I think we really drove that home all through the Ulster campaign, and now that we’re in a semi-final it’s even bigger again.

"We have a lot of boys in the likes of Dubai and Australia, America. Just for them to be coming home for games and to be talking about Gaoth Dobhair GAA...

"I always say that to bring your club crest up against the best, that's always your aim.

"In my opinion, they [Corofin] are the best club team at the minute - they have been for four or five years. Everything they do, the attention to detail. When you're playing a team, you hear what they're doing and different things. You know, they've sent cameramen to our games and stuff since. It just shows that they're really focussed on what they want to do.

"We feel that it's a long season, 12 months, but they're four or five years at this. They’re seasoned campaigners. It's a big ask but we'd rather be here than watching on TV."

Above: Kevin Cassidy, former Donegal and current Gaoth Dobhair footballer poses for a portrait ahead of their AIB GAA All-Ireland Senior Football Club Championship Semi-Final against Corofin taking place at Páirc Seán Mac Diarmada in Leitrim on Saturday, February 16th. Having extended their sponsorship of both Club and County for another five years in 2018, AIB is pleased to continue its sponsorship of the GAA Club Championships for a 29th consecutive year. For exclusive content and behind the scenes action throughout the AIB GAA & Camogie Club Championships follow AIB GAA on Facebook, Twitter, Instagram and Snapchat. Photos by Sportsfile