'Looking At Him In The Coffin, All The What-Ifs Come Up'

Kieran Donaghy's relationship with his father Oliver is a major focal point of the four-time Kerry All-Ireland winner's upcoming episode of 'Laochra Gael'.

The first episode of the TG4 series' new season airs on Thursday, March 5th at 9:30pm.

Donaghy's father hailed from Tyrone and his mother from Kerry. When he was young, they spent some brief time living in his father's native county.

"It was an enjoyable period for me but there might have been a bit of hassle in the background which led to us going back home," the Tralee man says in the episode which is titled 'Kieran Donaghy - On The Edge'.

"I was happy to be back in Kerry. I love my dad. He was that figure in the house and he was a strong man - he was my hero. He'd take me to games, he'd take me to football. I was at the Munster final replay in '87, sitting on the sideline - there were lots of good times.

"It was alcohol. It was gambling. When he was down that road, you'd just know it by him. I'd know by his demeanour that he was different. That's when he'd drink onboard. The spark had almost gone out of him when he was in that mode.

"My mom did a good job of keeping it from us.

"I wouldn't have dealt with it too well. It was a case of when they did split up, my dad would have been like, 'Oh, have a chat with your mom. I'm better now, I'm not doing this, I'm not doing that'.

"I would have gone home to mom going, 'Mom, dad's OK, he's in a better place, you need to take him back'. It would have been very hard for my mom. She put up with so much that we didn't see."

Donaghy says that through that period in his life, sport was his sanctuary.

I struggled in school. The rage that was inside of me spilt out onto any fella who was at me; that was so unlike me. I was such a relaxed, kind-natured kid that wouldn't be like that at all.

I would say for the first time ever, I was getting in trouble at school for stuff like that. Normally, I was a bit giddy and I had a good enough nature that the teachers would let me away with it, but this was confrontational fisticuffs in school as a 10 or 11-year-old.

Sport would have been my other avenue. The basketball was probably my biggest refuge of all because I could just get lost in the world of trying to be Michael Jordan out the back of my house on cold winter nights with my gloves on, shooting a basketball for three or four hours, not wanting to go inside and deal with the disappointment of my dad not being there.

After winning consecutive All-Irelands in 2006 and 2007, Kerry faced Tyrone in the 2008 final. Donaghy knew his father would be sought out by the media. That was a game Kerry ended up losing by four points.

"I opened up the newspaper on the Saturday on the way to Croke Park and there was a two-page spread of him with a half-Tyrone, half-Kerry that they brought with them. It wasn't the best thing to be looking at on a Saturday heading up for a game, and your teammates looking at it as well.

"I ended up falling out with him after the game. When we were having the row afterwards, and this was after the dust settled of the result, it was 'Oh, they said it was only going to be a tiny thing'. I was like, 'Look, I told you what to do. I didn't need that'.

"When I look back on it now, I didn't talk to him for a while after that. I was probably taking the easy option in casting some of the blame of my relatively poor performance [on him] - maybe he was an easy target." 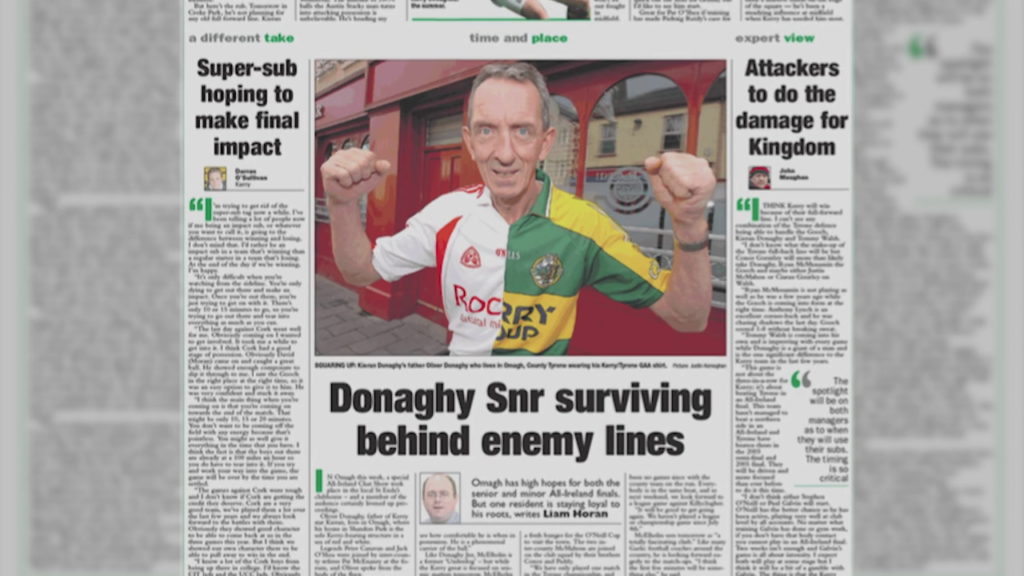 Oliver Donaghy died in March 2012, days before Kerry were due to play Cork in a National League game.

"I just got a phone call through and I knew straight away," Donaghy says.

"I saw the northern number and it was my auntie telling me that my dad has passed during the night.

"I just went home in a daze really. I didn't know what to think because I hadn't been on great terms with him at that stage.

"It's always the danger you have when you were arguing or fighting with someone in the family: If something happens, you never get time back to have it out with them.

"I felt that maybe I should have had it, maybe gone up to him and had it out face-to-face. I felt I could have been the bigger man in the situation and I wasn't.

"Then you're looking at him in the coffin getting ready to put him into the ground. It's just all the what-ifs come up.

"The boys were good, the boys were around me. Jack told me I didn't have to play but I told him I wanted to play. I told him he'd want me to play. He'd like the buzz of them calling out his name in Páirc Uí Chaoimh, my old man. I said I'd give him that shout.

"I took home his dog that I still have today, Buddy. Even though he was called Star, I couldn't go around calling a dog Star (Donaghy's nickname), people would think I was gone mental.

"I changed his name to Buddy and he's still around the place. It was like we had an instant bond straight away when I met him. It was almost like I was looking after a part of my dad."

See Also: 'Hopefully We Can Prove Ourselves This Year' - Sarsfields’ Sarah Spellman