The season ends and we retire to Mulligan's to get the views of our bar-room sage.

We asked Sean Óg did he feel any sympathy for Mayo after the heartbreak of an eighth final loss in a row. He shrugged his shoulders. He appeared bemused by the use of the word 'sympathy'.

Sympathy!!! Has one of them died or something? Did one of their relatives die? Will you ever catch a hold of yourself, man? You're trying to get me to start crying here? Because Mayo lost a football match? This is bloody Princess Diana stuff! Go get Elton John to write another shit song about it. I'm sick of this weepy shite. They'll win when it they win it. Curse, me backside.

How far does this go? Is there going to be a book of condolences set up in Castlebar? Will Enda Kenny order the flag over Mayo county council to be lowered to half mast? It's gone well beyond a joke, this hyperbole. Mayo people don't want to hear me saying that my heart goes out to them. What use is that to them? My heart is irrelevant in all of this. I've already been fitted with a pacemaker anyway.

It's the same load of nonsense every time Mayo are in an All-Ireland, we have to listen to this keening afterwards. I can hear bloody Peig Sayers warbling away her miserable poetry in the background. By all means, let the rest of ye keep going with this patronising bollocks. I'll have no hand, act or part in it.

Mayo were beaten by a better team. That's that. Let them go away and come back next year, if they're able.

Like many a man who is overly fond of deploying the word "bottler" in sporting analysis, Sean Óg does not believe in the small margins theory of football. As we disclosed last July.

No matter how close a game appears on the scoreboard, there is, in Sean Óg's view, a parallel psychological game going on where the margins are not at all fine. If you keep a close eye on that psychological game, the eventual victor will have been obvious to you all along.

A firm believer in the maxim that history always repeats itself, Sean Óg often knowingly alludes to this psychological game whenever Mayo lose a match.

His theory of football brings to mind Hamlet's quote, "There's a divinity that shapes our ends, rough-hew them how we will." We made the mistake of quoting this to him and were accused of over-intellectualising again.

Who's that? Is that Seamus Heaney? I didn't go to Trinity. That wasn't the done thing in my time. I left school after the inter-cert so you can leave your bloody Seamus Heaney stuff at the door.

Lookit, I'll tell you one thing for nothing. Even if the goalkeeper hadn't dropped that ball, Mayo would have lost the match anyway. There's other forces at work here. A wise man once said to me that every match ebbs and flows. Sure, if they hadn't conceded the goal, the Dubs mightn't have relaxed and allowed them kick the next couple of points.

You always have to cope with the bounce of the ball. But the game is played in people's heads too. How well the guys who have a history of winning these games, who have more confidence in them, usually drive on and win them in the end? 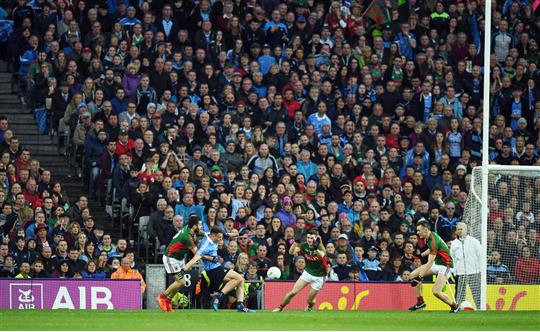 If ye messers knew anything about football, you wouldn't be surprised by the result. Didn't I tell you that Dublin would win it all along. But ye wouldn't listen. You wanted to believe in that feelgood story that Mayo were going to break the curse and win for the first time in sixty-whatever years. All so ye could get your traffic or whatever ye call it. Is that what ye call it? (It's distressing to realise that Sean Óg is onto us).

And so, we ask Sean Óg what he thought of the season overall. "A season of Sundays," we said rather pompously (which caused him to make a face. In retrospect, this was understandable). He was cantankerous throughout his dealings with us.

Among the many, many things which annoyed, nay enraged, him this year, there included 'The Marty Squad', the RTE Player, Sky Sports, and players blaming the rain for being shite.

Also, the GPA, the order in which matches are screened on the Sunday Game, and the state of Cork hurling.

He was especially pissed off to see Bruce Springsteen playing in Croke Park. He found reasons to be annoyed when there appeared little to be annoyed about.

He was drawn into rows with Tipperary football fans, hassled for All-Ireland tickets by Mayo fans, and went viral when a group of Dublin fans harassed him with a selfie stick.

At present, the video 'Dub fans sing Auld Triangel {sic} beside angry Kerry bastard' has clocked up 14,674 views on youtube. Again, we must disclose that we don't know if Sean Óg is from Kerry or not.

Appealing to his sentimental side, we tell Sean Óg that for all his giving out, we know he's going to miss it anyway.

Miss it? Would you ever fuck off with that shite! I'm glad it's over for now to be honest. Need a break from all that pulling and dragging. It'll be good to get back and watch some racing. I haven't seen Ted Walsh's mug on the TV in a long time.

The big lesson that can only be drawn from this season is that this game of Gaelic football is getting worse. And it gets getting worse at a furious rate.

And I have to say this endless black card shite bored the arse off me. D'you remember the start of the year? All we heard about was Champions League systems this or that. Every ex-player and pundit with a pen was coming out tell us their alternative championship system. As if any os could be bothered with that. As soon as even they tired of this mind-numbing shite, the press found a new hobby horse in the black card. Would ye ever change the record?

This game has taken a wrong turn. The last All-Ireland final I was bothered to go into was the 1986 All-Ireland final. The game has gone into serious decline since then. Great football is dead and gone, it's with that Kerry team in the grave. (Impressive poetry reference from Sean Óg given his earlier protestations.)

(Sean Óg O' Kneejerk was in conversation with Conor Neville)

Read more: "Go And Ask Enda Kenny" - Our Controversial Columnist Finds Out Dark Side Of Being A GAA Columinst