One of the most dominant dynasties in Irish sporting history was finally downed on Sunday afternoon, as Knockmore stopped Carnacon from claiming a 23rd successive senior ladies football title in Mayo.

Carnacon's dominance in Mayo has been scarcely believable since the turn of the century. They had won a remarkable 22 Mayo senior titles in a row ahead of Sunday's county final.

All-Ireland inter-county winner Cora Staunton was among those lining out for the giants of ladies football on Sunday at James Stephens Park in Ballina.

It was not a day to remember for Carnacon or Staunton, though, as Knockmore managed a sensational - and comfortable - county final win.

Knockmore were assured in managing the game, and their captain Shauna Howley contributed nine points to their efforts - more than the entire Carnacon team managed.

Staunton, who has won four intercounty All-Ireland medals, was ultimately sent off late in the game, having already spent ten minutes in the sin bin earlier in the game. It was a reflection of Carnacon's afternoon, as they simply had no answer for Knockmore.

At the final whistle, Knockmore took an assured 1-16 to 0-7 win, with hugely emotional scenes on the pitch at full-time.

The Empire has fallen! Carnacon have been defeated at last. Amazing scenes as @Gaa_Knockmore finally slay the twenty-three in a row champions by 1-16 to 0-7. pic.twitter.com/rJCGed4ppY

Knockmore manager Cormac Reape claimed after the game that seven of his players had not even been born when Carnacon's extraordinary run of dominance began in the late 1990s - a scarcely believable stat that pays tribute to the might of Carnacon in Mayo football.

For Knockmore, it was a day to remember. It's been some year for Mayo and the end of dynasties, and the triumph for Knockmore was an extraordinary achievement against one of the great club sides of recent years. 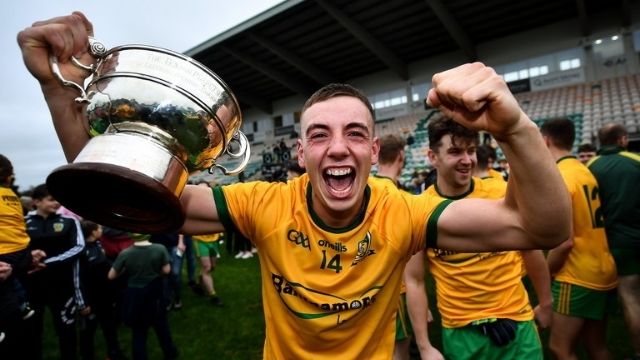 GAA
2 years ago
By Declan Rooney
'There Aren’t Enough Words To Describe Olivia. She Is Playing Outstanding Football'
GAA
2 years ago
By PJ Browne
Cora Staunton Makes Comeback As Carnacon Win 20th Consecutive Mayo Title
GAA
3 years ago
By Maurice Brosnan
'We Wanted A Chance At Carnacon' - How The Ladies Club Champions Were Dethroned
Popular on Balls
Golf
1 day ago
By PJ Browne
Shane Lowry And Rory McIlroy Delighted For Seamus Power
GAA
1 day ago
By PJ Browne
'It Was Crazy, We Were Still Hurling With St Kieran's College At The Time'
Football
22 hours ago
By Jonathan Byrne
Remembering Jimmy Bullard's Timid Big Dunc Stare Down From 2006
Football
1 day ago
By Jonathan Browne
Scott Brown Really Enjoyed Playing Against Rangers Last Night