Sunday's All-Ireland Ladies Final - which was played in front of a record crowd of 34,445 at Croke Park - was a dramatic game and one filled with controversy.

A legitimate Dublin score not being allowed in the first half, a decision which became more controversial due to the final scoreline - Cork won by a point - overshadowed some fine performances.

After the game, Balls.ie readers voted for their All-Ireland Ladies Final Player of the Match.

In a tight poll, Cork's Briege Corkery came out on top with 28%.

The midfielder won a remarkable 17th All-Ireland medal on Sunday. According to the Irish Examiner, Corkery gave a stirring half-time speech. At that stage in the game, Cork were down a point. She was also a major influence on the pitch 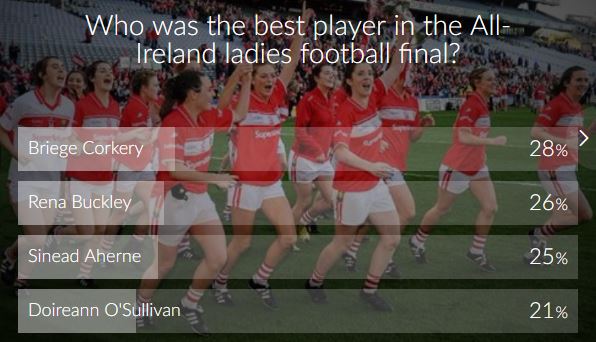 Second in the poll came Crokery's teammate Rena Buckley. Like Corkery, she also won her 17th All-Ireland medal at the weekend. The breakdown: 11 in football and six in camogie.

Dublin's Sinead Aherne - top scorer in the game with 1-3 - finished third iwith 25% of the vote.

Doireann O'Sullivan also received plenty of recognition for her performance where she scored 0-3. She got 21% of the vote in our poll.