When he joined the Kerry set-up, Donie’s work on the training field was brilliant. He was very different, he was always trying to think outside the box. He challenged you to engage in the training session as opposed to just going through the motions. He was meticulous in is planning and was always bursting with an enthusiasm that players really enjoyed and fed off. He brought a huge repertoire of training material, full of new twists on old drills and games that kept everybody on their toes.

The brain had to be switched on all the time when Donie was in full swing.

Donie Buckley is a renowned name in GAA coaching spheres and an unheard one outside of it. The Kerryman is currently prepping Mayo for his sixth successive year as a selector. Hailing from Castleisland, Buckley worked with the Kerry footballer until 2012 when he left just prior to the Munster championship, to the disappointment of many squad members.

In 2012, James Horan rang Buckley and encouraged him to join his coaching ticket for the following season. Ever since then, Mayo star Lee Keegan has worked with the Kerryman and benefited from it.

To be honest, he brings a whole game intelligence on how the game is played and how it should be played, that whole aspect. He's a great philosophy on how we should play football and I love the way he does think. Donie can play either defensively or offensively in the same manner.

For me as a defender he really works on our footwork and technique of tackle. Especially in the likes of Croke Park, that can influence a defence. Being able to stand your man up one-on-one in a lot of space is something that we hugely pride ourselves on. When you come up against the likes of Dublin and Kerry who have serious forwards, who can take you on one-on-one, that's where the benefit of having Donie Buckley is.

Buckley pays close attention to other sports, in a bid to identify adoptable aspects. His engineering background ensures he can methodically plan techniques he intends to implement. He has had spells with Limerick and Clare and hosts coaching workshops for up-and-coming managers which routinely sell-out.

In training, Keegan gets the opportunity to experience what it is like to be on the other side of Buckley's work, particularly when marking forwards.

That's another learning curve, Donie has the offence and them primed to really take us on in training. We've to really work on our footwork, our hands, our technique and tackle. That's where Donie comes in, we see the benefits there. He's very good at that kind of stuff and you see the benefit of it in big games, it's very evident that our tackle is very effective.

Mayo's man-on-man ability has been enhanced thanks to Buckley, which has seen them progress into the explosive unit they undoubtedly are. 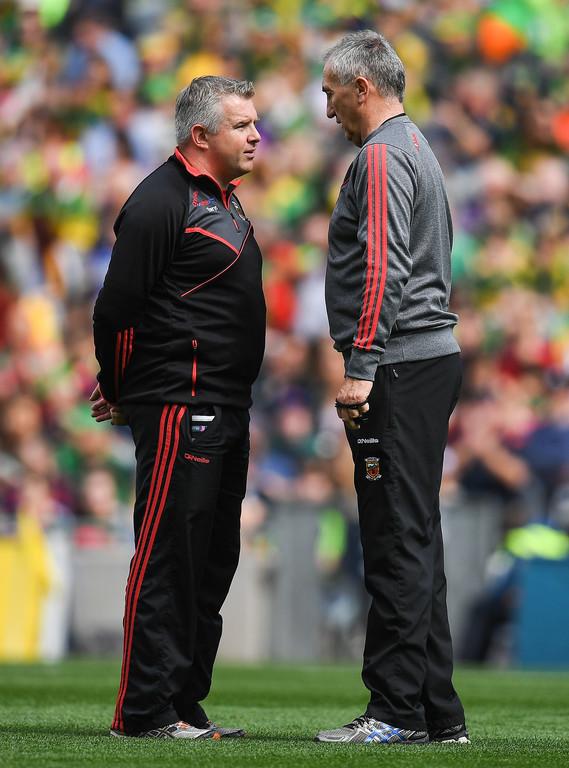 Rochford's men have a mouthwatering opening Championship clash with Galway this year, and Keegan's management are priming them for revenge.

Galway targetted us last year. They pinned us to our collar and beat us deservedly over the last couple of years. It is because we didn't, firstly, we didn't perform and secondly, we didn't turn up on the day which is really disappointing because we pride ourselves on that. We had a massive record in Connacht up to two years before. In terms of that, we want to get back among silverware.

Rochie (Rochford) and Donie work close together in terms of what we can do differently and looking at new things, but that comes with new players too and trying to unearth them. That is a key factor. Look at Kerry last weekend, they had numerous players who looked very experienced and comfortable on the national stage which a big plus for them.

Buckley and Kerry's path may have parted but it hasn't damaged the regard he is held in within the kingdom. After Mayo overcame Kerry and reached last year's All-Ireland final, there was one saving grace for the Castleisland gentleman on the stools of McCarthy's Bar or the aisles of Garvey's supermarket:

'Sure, wasn't it a Kerry man who got them there.'

For Keegan and Mayo, last year's loss is a learning curve they hope can prove to be a benefit in the long run.

With their current management ticket, Mayo have the experts capable of finding it.

Lee Keegan was speaking at renovation of the Sports Physio Ireland clinic in Dublin 2 - fitted out by Ardco Construction. Sports Physio Ireland are experts in sport specific injury management, returning clients to play better than they ever were before. For more visit www.sportsphysioireland.com

SEE ALSO: Lee Keegan Is Forthright In His View Of Any 'Blanket Defence'

GAA
2 years ago
By Evan Coughlan
Watch: Cracking Conor Boylan Goal Helps Limerick See Off Laois
GAA
2 years ago
By Michael Mulkerrins
The Damning Stat That Shows How Clare's Defence Is Killing Them
GAA
3 years ago
By Maurice Brosnan
Opinion: Donegal's Positivity Punished As Cynicism Now Part Of The Game
Previous Next

GAA
2 years ago
By Evan Coughlan
Watch: Cracking Conor Boylan Goal Helps Limerick See Off Laois
GAA
2 years ago
By Michael Mulkerrins
The Damning Stat That Shows How Clare's Defence Is Killing Them
GAA
3 years ago
By Maurice Brosnan
Opinion: Donegal's Positivity Punished As Cynicism Now Part Of The Game
Popular on Balls
Golf
1 day ago
By PJ Browne
Seamus Power Into World's Top 50 Golfers After Another Great Weekend
Football
23 hours ago
By Gary Connaughton
Some Pundits Are Revelling In Rafael Benitez's Everton Sacking
32