For almost a quarter of a century the denizens of Leitrim have been living on a diet of former glories, hoping to spot even a hint of optimism over the horizon.
They've waited. And waited. They recount the heady days of 1994 ad nauseam, without ever knowing for sure whether those days will be repeated.
On Monday morning however, every village and town in the county stumbled upon an unfamiliar sight. As every inhabitant of the county went about their morning business, they will have found themselves distracted by the bundle of morning papers, and in particular the back pages, stacked in the corner of their local shop.
For on these pages, usually reserved for the exploits of Dublin, the Premier League and glitz of its kin, were lovely Leitrim men, celebrating what will surely go down as the most heartwarming sports story of the year when the curtain comes down on 2019. 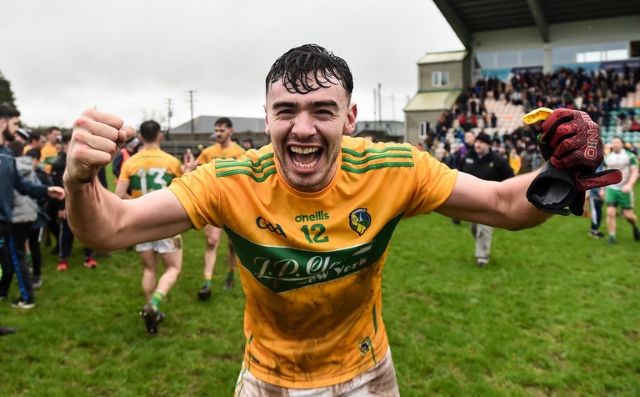 SEE ALSO: In Pictures: Pure Joy For Leitrim As They Secure Promotion To Division 3

"For us, it's everything," says Damien Moran, just one of the Leitrim men sprawled across a number of national titles.
"We've had many a dark day in Leitrim and, thankfully, this weekend has brought some promise and some joy. It's nice to get your moment in the spotlight, if you want to call it that."

Promotion to Division 3 means more to the least populated county in Ireland than an All-Ireland does to many. Having the chance to run out at Croke Park, however, is perhaps just as important.
The county haven't graced Drumcondra on matchday since losing to Louth in the Tommy Murphy cup final back in 2006. No county has been absent from the venue for longer than Leitrim.

Promotion is the big achievement and, ultimately, the day out in Croke Park is what has been on everyone's mind. I suppose we're stuck in Division 4 now for a good number of years and the main aim at the start of the year, as it is every year, is to get out of Division 4.
Thankfully, and a little bit luckily this year, we managed to get the job done with two games to spare
It's nice to get that bit of attention, if you know what I mean from a team point of view. But we're back to training [tonight] and of course we still have two league games to play. We'll be fully focussed on that and we'll be hoping to bring a bit of form into the final.

After years of avoiding the lure of New York and Chicago and London, Leitrim players, like Moran, are now reaping the rewards, sowed with seeds of sweat and sacrifice.
But Leitrim people, despite the lack of honours, will always maintain that GAA is within their DNA, an intrinsic element of their make-up, and when the county comes calling it brings with it an irresistible tug.
"Personally, I just love it," Moran says of playing for the Green and Gold. "I think it's a huge honour to play for my county at any level. I suppose I've been lucky enough to play the last few years but it's never a chore or hard to come back."

I suppose, initially, it might be. There are wintry nights when it's wet and miserable in November and it's not easy. But when you're not playing you don't know what to do with yourself.
I suppose when you finish with your club football every year around September it's nice to get the break. Going back then it is tough and you say to yourself, 'am i able to give it another crack this year with work commitments and everything?'. It is a fairly intense commitment.
But once you get back at it for a week or two you're fine. You get back into the routine and you realise why it is you do it.
We're a proud county. I've always said we have the best fans if we'd only give them something to shout about and hopefully this year we have.

While Leitrim's performances have taken most by surprise this spring, more of us should have probably seen it all coming.
A surprise championship victory against Louth last summer was almost followed up with a major surprise in January when Mayo needed penalties to overcome the Connacht minnows in the FBD league.

The Mayo game, in hindsight, should probably have served as an indicator of revolution in the northern corner of the province. The big question now is whether the uprising can continue to boil over and take the Connacht championship by surprise, though the embers of hope have now become a beacon. Opponents, you've been warned.

The Mayo game was funny because at one stage, I think, Mayo were like eight points up. I think we thought, you know, same old story again with the big teams. But we managed to claw it back and, ultimately, we were probably unlucky not to win it.
Penalties was a cruel way to lose it but it was a great performance from our point of view.
It's never too early to dream. It's a process for us. This is just another rung on the ladder, getting up out of Division 4. We can then take the form to championship and maybe take a scalp.
The Connacht championship is very strong now. You have Galway, Mayo and Roscommon, who are seasoned campaigners, there. The way the draw has fallen for us this year - if we were to get to a Connacht final and win it we'd probably have to beat all three, which is why we treat the league campaign as our championship.
We put everything into the league because we are playing teams at our own level on a week-to-week basis. It's easier for us to focus on that."
So is that justification for a Tier 2 championship?
Personally I would be in favour of it in some sense. I don't have the answer; I don't know what way to go about it. But I think it's becoming more and more obvious every year that there is a reason for it.
It's no fun playing against Division 1 teams in the championship and getting a drubbing. It is nice to play the big teams; it's also nice to be playing at your own level, too.

To say this could be the start of something special would be to state the obvious. The heroes of 1994 still bedeck the walls of every hostelry in the county and for the current batch of players to receive such an ubiquitous legacy there is still a long road to travel.
But the bandwagon is already rolling. And they're going to enjoy it while it lasts.