'We’d Have A Similar Approach To Dublin, It’s Not Spoken About'

At Croke Park on Sunday, Corofin aim to make history when they face Kilcoo. A victory would make them the first club to win three All-Ireland football titles on the bounce.

In 2012, Silke was part of the Corofin minor team which won the Galway title. Six of that team started in the All-Ireland semi-final win against Nemo Rangers earlier this month.

"We hadn’t won anything [before then]," Silke says.

"We got to a few finals - we were in the Galway Feile final and we lost it. So that was our first proper county championship.

"But it was a combination of my age group and the age group two years below us where there was four or five very good players from that, the likes of Kieran Molloy, Dylan Wall, Dylan McHugh and they hadn’t been playing with us.

"So I think it was when they came together that’s when we started being successful and we would have won three or four U21s after with the same group of players." 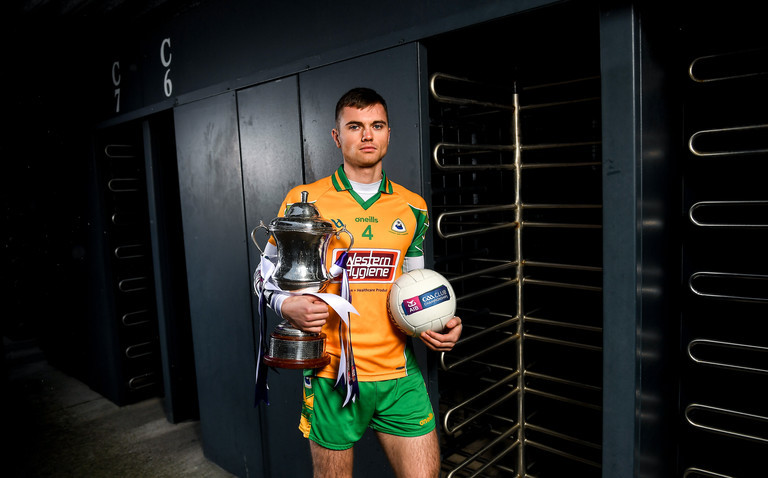 Corofin and Galway Footballer Liam Silke is pictured ahead of the AIB GAA All-Ireland Senior Club Football Championship Final where they face Kilcoo of Down on Sunday January 19th at Croke Park. Photo by David Fitzgerald/Sportsfile

2020 has so far been a year far less hectic for Silke than previous ones in which he was also playing Sigerson for UCD. The 25-year-old has a year-and-a-half of his medicine course left but is ineligible for third level GAA as it's his sixth year in college.

"I’m living in Dublin and trying to travel back to Galway," says Silke.

"I’m just not able to do post-graduate medicine in Galway so I had to travel for it. It’s just about timing really, knowing what to prioritise at different times in the year.

There are many factors in Corofin's success but a common denominator in the careers of the players populating this team has been one man in particular: Frank Morris.

"It’s just their sheer commitment and dedication to Corofin. Frank, he’d be out cutting the grass in Corofin for the pitches. It’s not just pure training, he’s dedicated to Corofin all-round.

"It’s those type of people in a club that really hold it together. Every player in the team would have been trained by Frank at some stage I think so, yeah he’s had a massive influence.

"I suppose it’s just started to be well-documented now how much an influence he has. Just as a trainer he’d be very focused on skill, kicking a ball, hook kick and everything like that. He’s just a massive, massive person in Corofin GAA.

"At the end of the day, it’s an amateur sport and if you’re not here to enjoy yourself then you’d have to be asking yourself why are you there? We definitely keep that at the forefront of our minds.

"Even every training session and that you have to go out and enjoy it or else you’re just going to dread going to it. But I don’t know if that’s a community thing that we try enjoy it or I suppose when you’re winning and playing nice football it makes it a lot easier to enjoy it as well."