It was an incredible feat but also one Liam Watson could see coming. On St Patrick's Day 2012, he scored a hat-trick of goals in the All-Ireland Senior Club Hurling Championship final.

"Here's the thing, you told me a few days ago you would do this," BBC's Mark Sidebottom reminded Watson in the moments after Loughgiel Shamrocks won their second ever All-Ireland title.

29 years earlier, in the year that Watson was born, Loughgiel had defeated St Rynagh's in a replayed final to become the first ever Antrim club to win the title.

Nearly three decades later and it was another Offaly team, this time hot favourites Coolderry, whom they beat.

It was a first half performance which began slowly - his opening point from play did not arrive until the 17th minute - but soon his top speed.

As Liam Watson announced his retirement from hurling; GAANOW Rewind takes a look back to the day the @AontroimGAA man helped his club @loughgielgac be crowned AIB GAA All-Ireland Club Champions by scoring a phenomenal 3-7 on the day! pic.twitter.com/zLawTI179c

Watson's first goal came in the 20th minute when a scuffed shot - hit after Stephen Corcoran had saved Shay Casey's strike - rolled over the line. It was Loughgiel's second goal of the game, Casey had already booted the sliotar to the net by the time Watson goal's put him up by four.

Late in the first half, plays from Watson saw the green flag raised twice at Croke Park's Hill 16 end. The first typified his maverick style.

In the 26th minute, standing over a 20m free, rather than take the obvious option, he fired a shot to the far side of the net.

Liam Watson is in tears...they're tears of joy. He scored 3-7 today.

"There was three players on the line with their sticks held to the wrong side," he told the Irish Examiner after the game.

They would have to have went across their body to get their stick to the ball. By the time they had changed their bodies around I was hoping the ball would have gone by them.

One of our players, Skinner, walked by me and said — ‘bury it’. PJ (O’Mullan, Loughgiel manager) told me to go for it, he gave me the signal (two wristbands on one hand). I said to him — ‘PJ, I’ll sort it’.

Two minutes later, Watson controlled a ball from half-forward Eddie McCloskey and with two touches, the sliotar was again over the line. 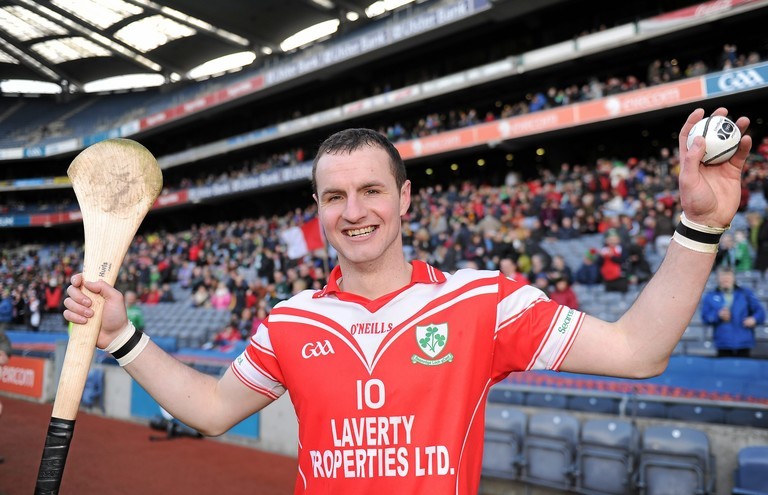 Early in the second half, Coolderry mounted a fightback, scoring four points without reply. That was as close as they got.

Watson tagged on four more points to take his total to 3-7 with 2-2 coming from play. It was the second consecutive game in which he had reached that total. In the semi-final against Limerick's Na Piarsaigh, he hit 0-16.

"It's unbelievable," he told BBC after the game.