Limerick's Awesome Trap And How To Beat It

74 seconds. That is how long it took Patrick Collins to realise the scale of the insurmountable task that he faced on Saturday evening. The Cork goalkeeper went short with his first puck-out. Long with the second. The outcome was the same. No return.

Of all the weapons in John Kiely's arsenal, their ability to destroy the opposition's puck-out is emblazoned on Limerick's coat of arms. Carried out with trademark suffocating physicality and relentless tackling.

The greatest opportunity to demonstrate that is after a score or wide. Limerick scored 0-33 and hit 20 wides. That is 53 Cork re-starts. The away side only managed to manufacture 18 attacking opportunities from that. It was an annihilation. Limerick turned over eight of the first ten puck-outs. In total, 0-15 came from this one aspect. 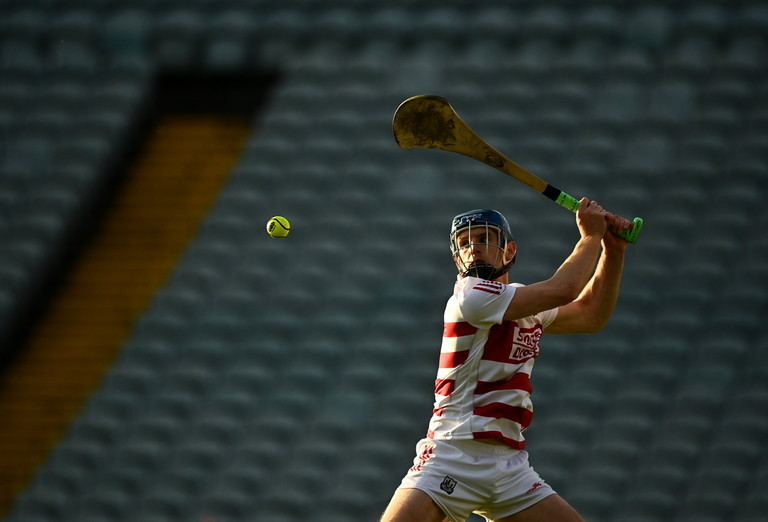 This is nothing new. The All-Ireland Champions produced a remarkable 1-38 off opponent's puck-outs last year. There is no doubt their rivals spend many hours of video analysis on it.

Of course, overall the game at the Gaelic grounds amounted to little more than shadow boxing. It is four weeks until the two sides face each other in the Munster Championship. Saturday was a glorified training session in preparation for that.

However, it did serve to reaffirm a key fact. Kieran Kingston is in search of solutions. While both teams named experimental sides, the difference is that Cork have questions. Limerick have options.

The choice between Richie English, Mike Casey, Dan Morrissey, Barry Nash and Sean Finn is a luxury. Every option has proven capable of an elite level showing in the full-back line. The same cannot be said for Cork's key positions.

Another question hangs over their system. The short-passing desire influences their puck-out strategy. Implementing it when faced with Limerick's aggressive press poses a problem. 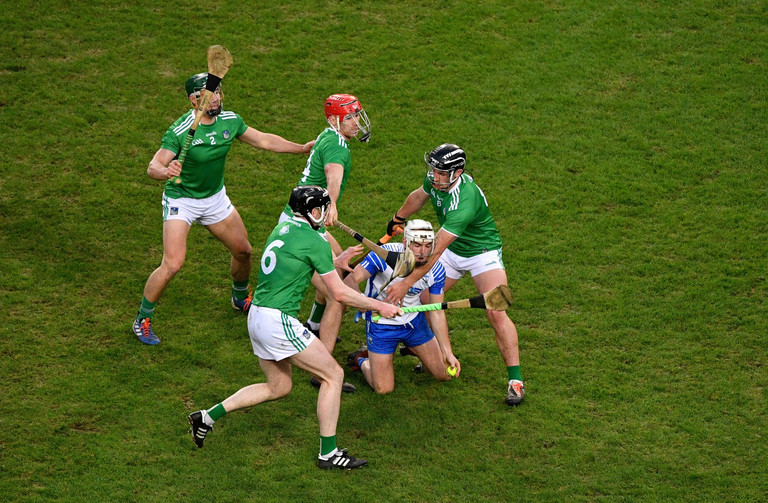 It is something Cork's management team are painfully aware of. In 2018, now selector Diarmuid O'Sullivan highlighted the influence of Kildorrey native Seán O’Donnell. O'Donnell was a statistician with Cork until 2017 when he switched to Limerick.

"One the key factors for Limerick this year is Cork's statistician and puck-out strategist for the last three years [O'Donnell] is now with Limerick so that's a major feather in their cap," O'Sullivan explained.

He's a fair idea of what Cork's puck-out strategy has been and he'll know different types of set-ups so I presume Cork have been working away trying to change different patterns for their puck-outs over the last number of weeks, just to throw Seán off the scent because he's excellent at his job.

Limerick's puck-out defence is a perfect marriage of brain and brawn. Their wing-backs and wing forwards are all imposing figures and accomplished in the air. Go short, and their dogged inside line descend with unabatingly. Go long, and it is put on a plate for their man mountains.

It isn't surprising that Collins struggled to navigate such an arduous path. It is also unfair to put all the blame at the number 1's door.

On RTE last weekend, Dónal Óg Cusack argued it was the system, not the goalkeeper, who was at fault.

"It is easy to blame the goalkeeper and obviously I am biased. You want to be a seriously good hurler in the full-back line to play the way Cork are trying to play out from the back. I wouldn’t necessarily blame Patrick.

"Inside in his head, he is being presented with a very hard puzzle to solve."

Limerick lineout in formation, maintaining their shape regardless of the opposition's movement. They are an extremely intelligent and well-drilled outfit, constantly adjusting and thinking proactively.

A great example was this puck-out in the second half. The space for Collins to target is obvious. In fact, it should be too obvious.

Shane Barret tries to pull Colin Coughlan out of position. Cork's Tadgh Deasy, marked by Richie English, begins to break into the space.

Collins sees the run and begins his strike. Before he has even hit it, Coughlan has ignored the decoy runner and made his way back. Tom Morrissey also drops back. 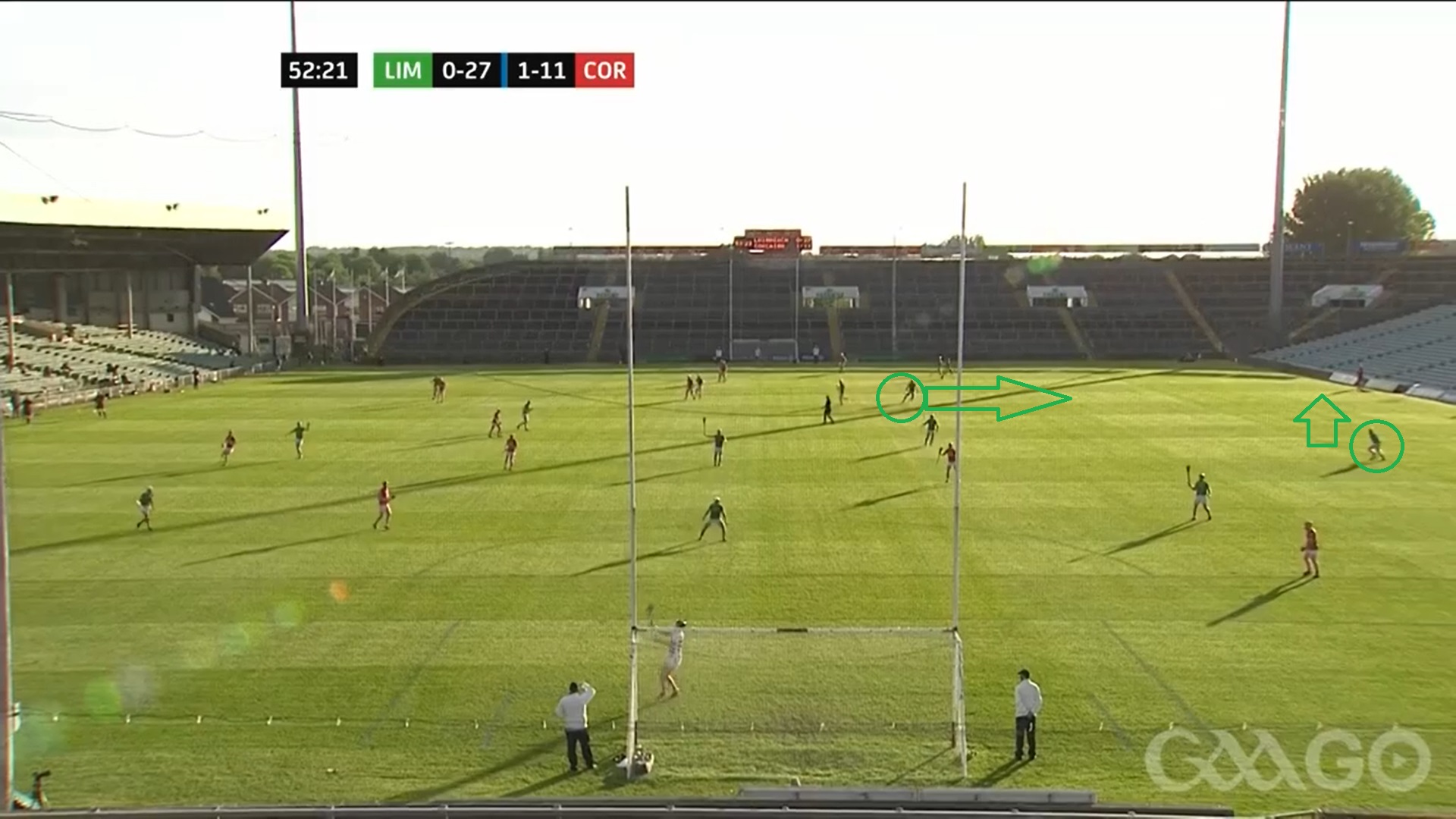 By the time the ball lands, Limerick outnumber Cork 3 v 1. English knows all he has to do is break the ball and Coughlan can sweep it up. He is fouled and The Shannonsiders win a free. 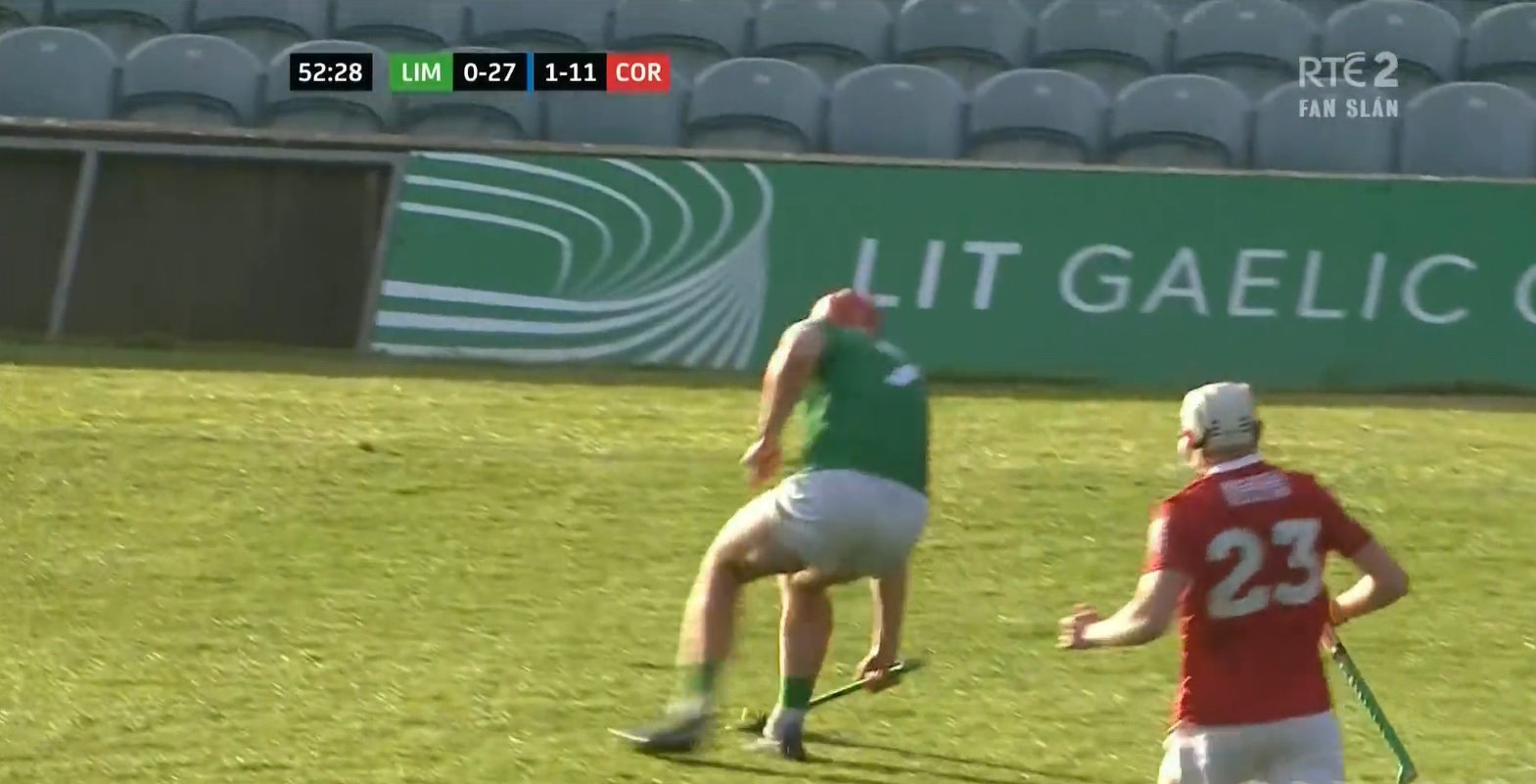 The first possible solution is old school but cannot be manufactured. It depends entirely on having the personnel available.

The last time Limerick lost in Championship hurling was in 2019 against Kilkenny. That day, Eoin Murphy was able to go long and hit the towering figure of Walter Walsh. Crucially, the Tullogher-Rosbercon clubman can win clean ball in the air.

Murphy goes long with his puck-out, deep into Limerick's half. 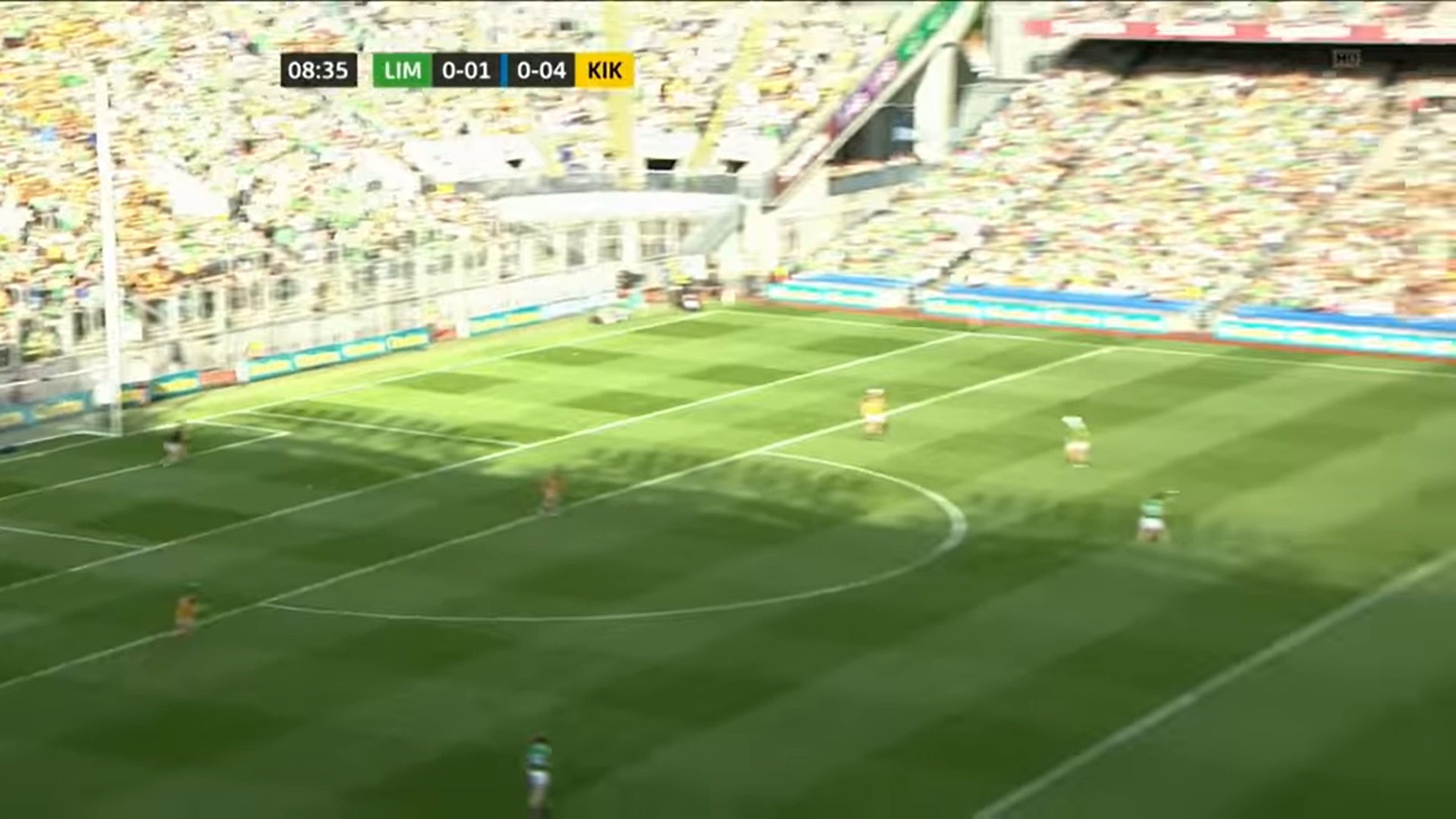 Walsh catches the ball. If it breaks, Limerick have three players nearby ready to pounce. 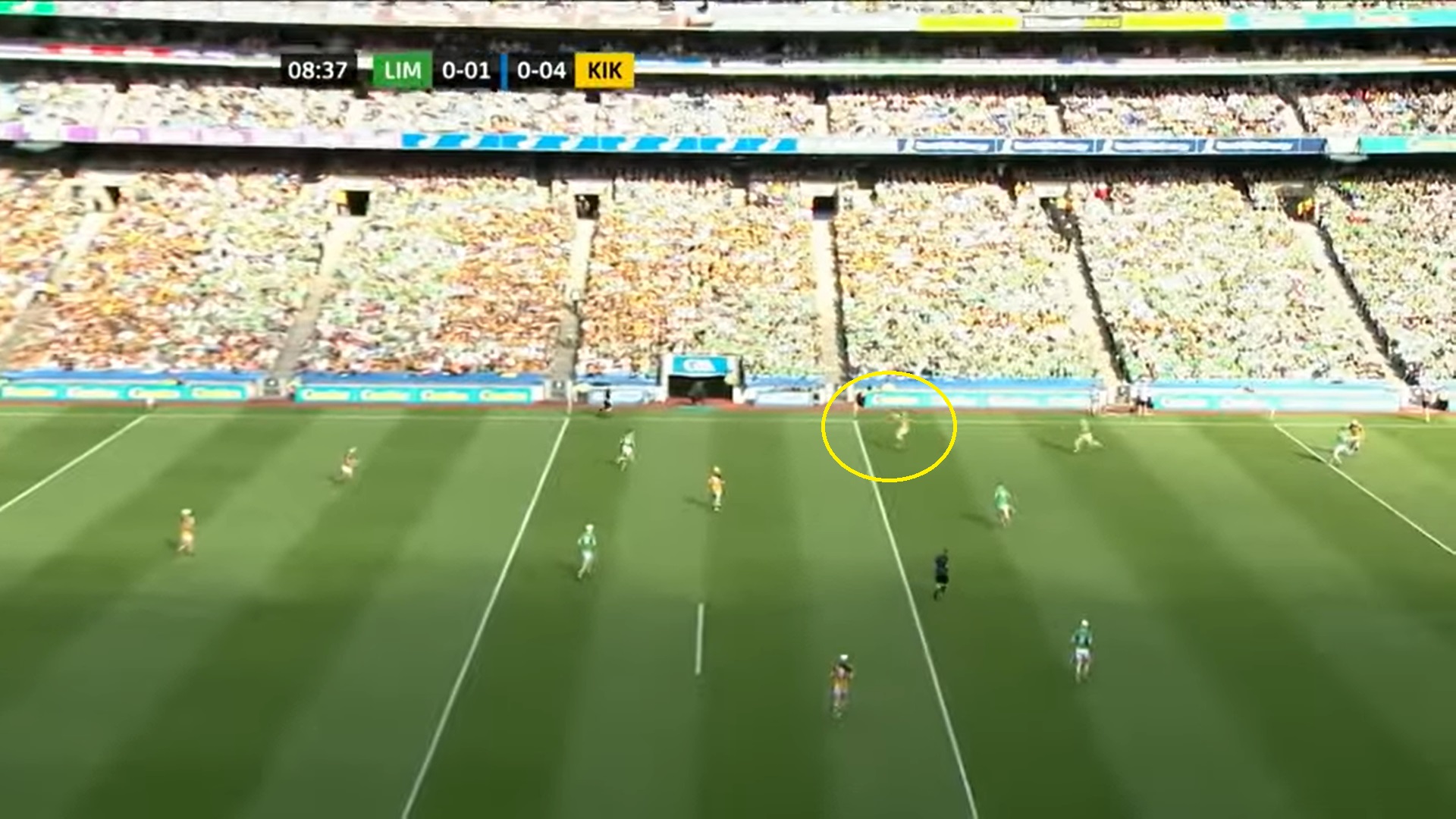 Walsh turns and immediately puts it over the bar. 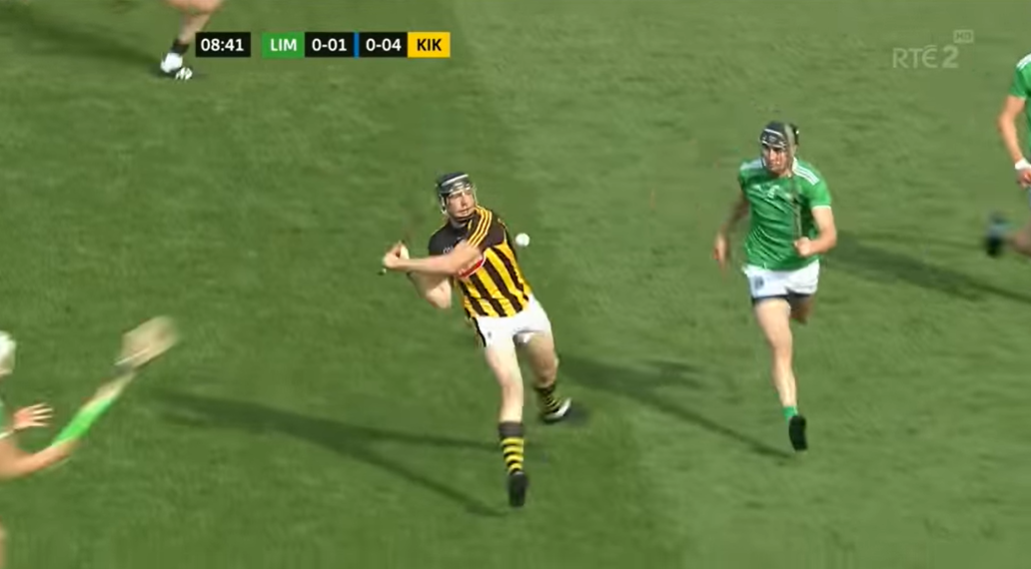 In order for this to be successful, the pass needs to be perfect. That is easier said than done. A half-second delay, a dropped ball, a moment's pause, that is the red flag to the bull. Touch and ball skills must be flawless to succeed.

Measures such as flooding the breaking zone can also help. In saying that, Cork do not necessarily need to abandon their adopted approach. When executed correctly, building from the back can break the press.

Cork's first score came from a short puckout. It started with a one-two between Collins and Sean O’Leary-Hayes. 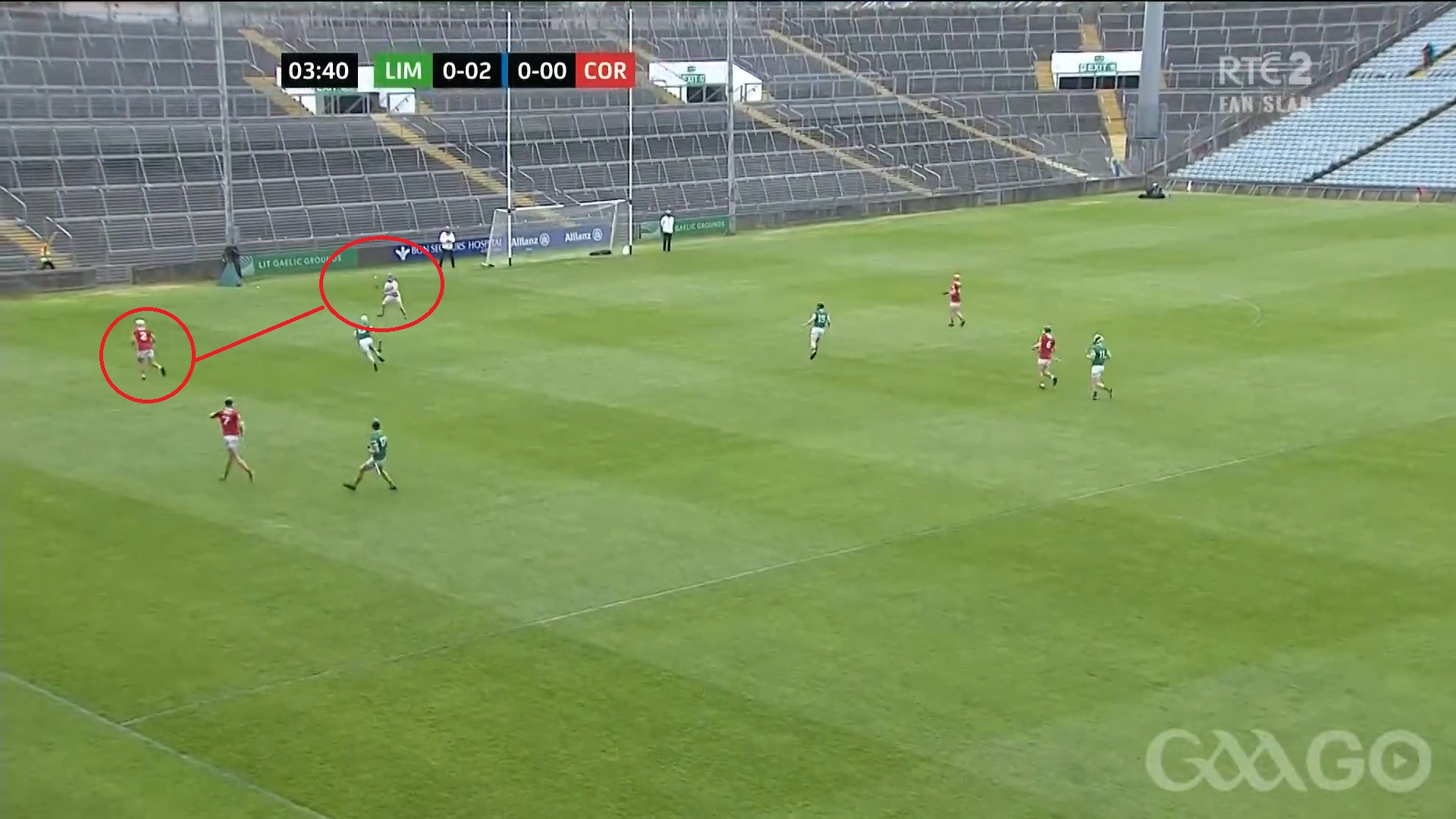 Collins then switches wide to Ger Millerick (circled). Note Damien Cahalane breaking forward. Aaron Gillane was busy occupying his zone and did not follow the run. 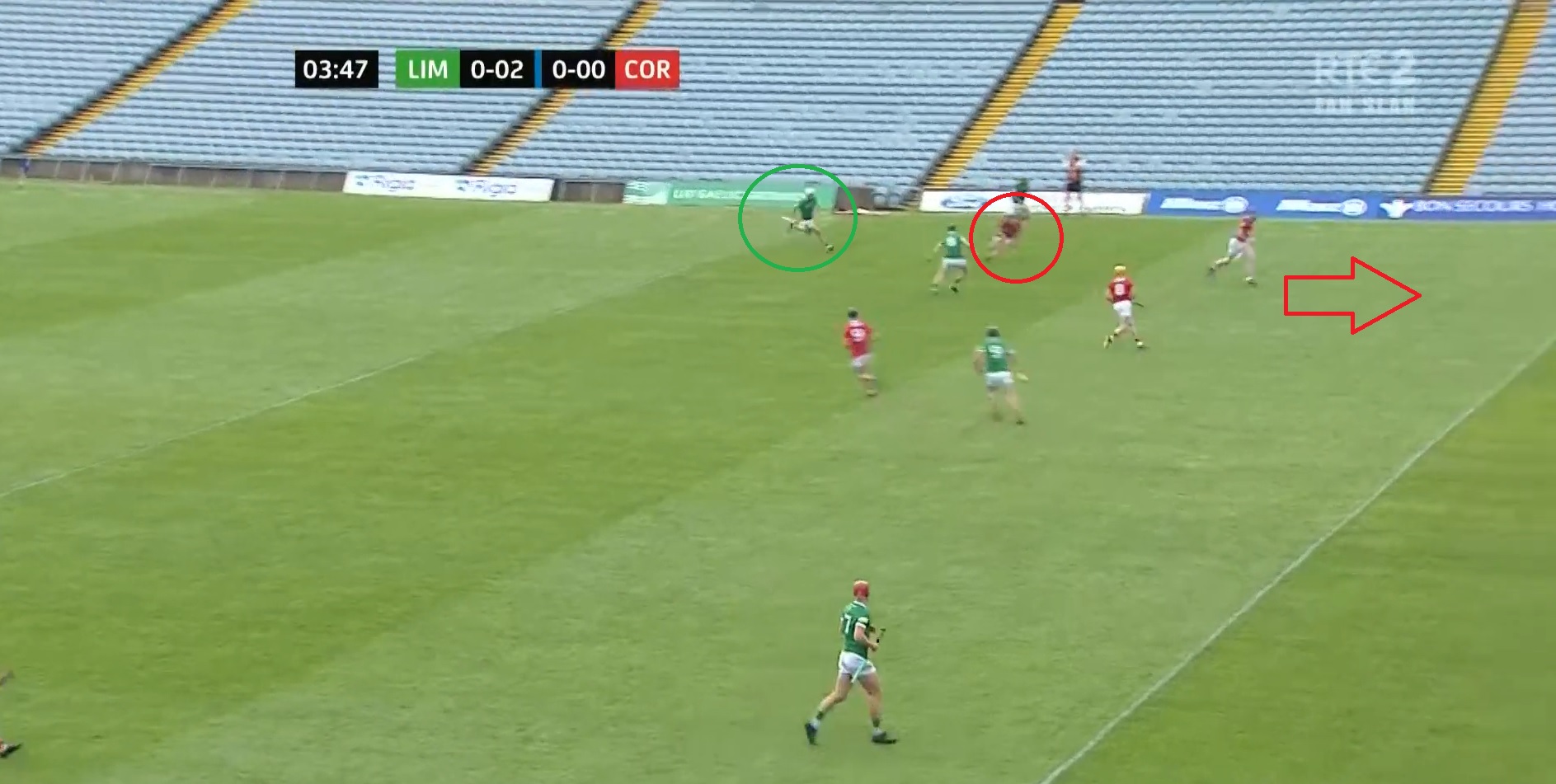 Now Cork can break the press and create an overlap. With encouragement from O'Sullivan on the sideline, Millerick goes long. 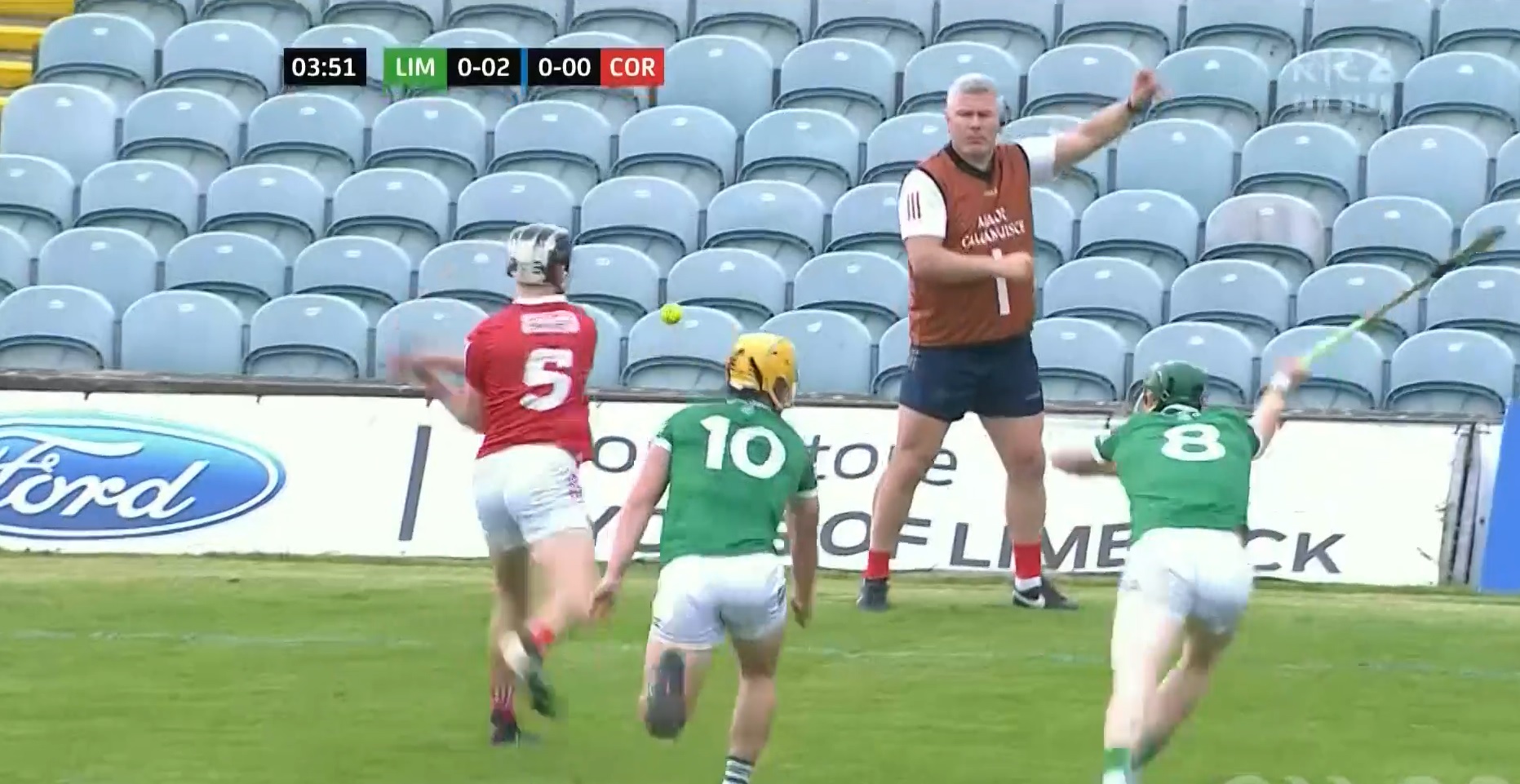 Cahalane is free with plenty of time and space. He scores Cork's first point. 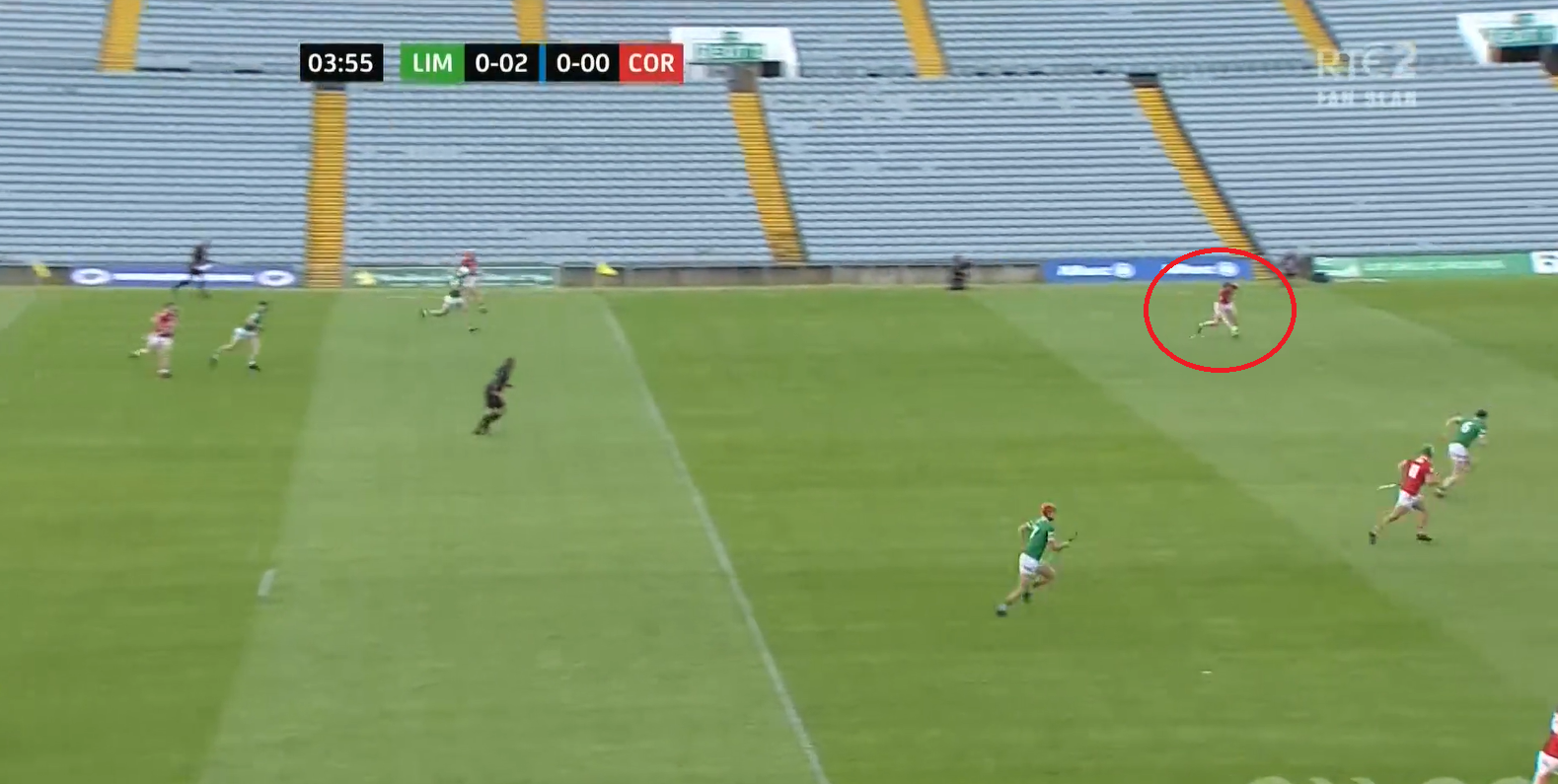 In this example, skill and execution were at the required level. Too often this was not the case. The sliotar was dropped or the pass was slightly off. In the second half, O’Leary-Hayes was even pulled for over carrying after receiving a short puckout.

Building on this, Galway also enjoyed some success with a short puckout last year. Both of their goals against Tipperary started with one.

Against Limerick, captain Pádraic Mannion dropped into the full-back line. 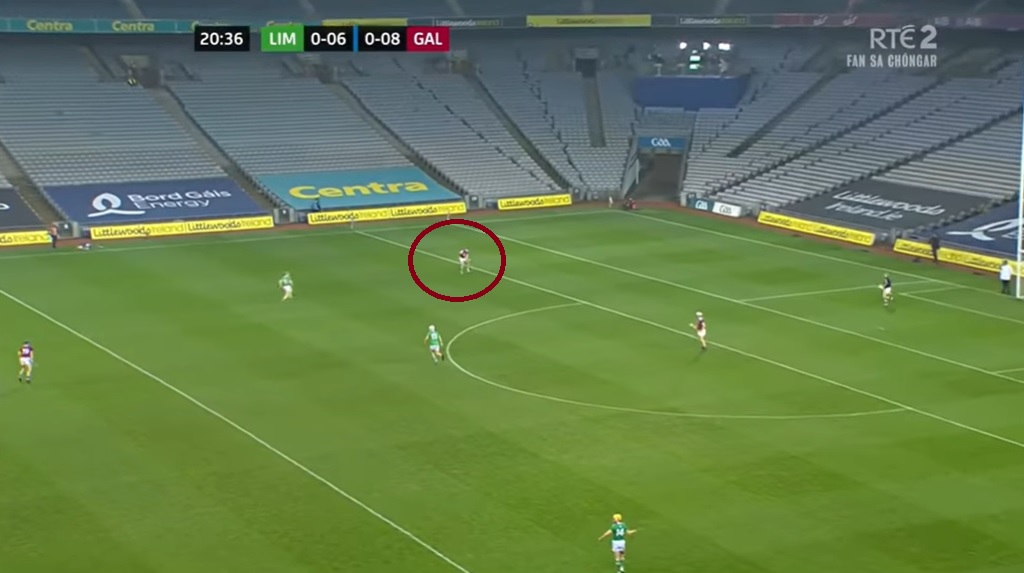 In the second half, they went a step further. Four players dropped into the full-back line. If Limerick press up, space is created out the field.

If they don't, Galway can find a free man with a short pass and work to create an overlap. 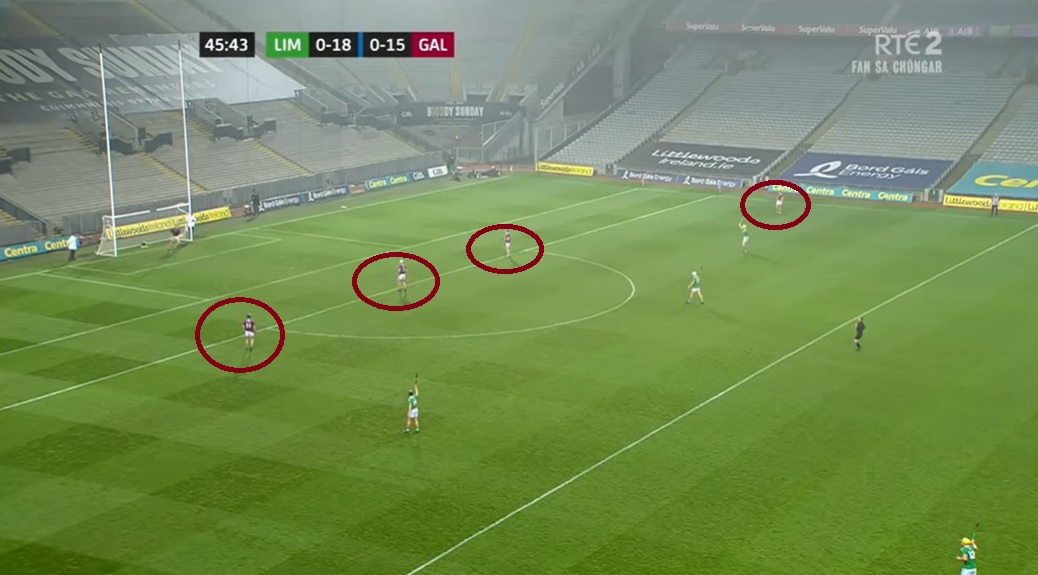 That game is a good illustration of the seismic challenge. Galway retained 66% of Eanna Murphy's puck-outs. Be that as it may, every small mistake was seized upon. Limerick scored 0-5 off it.

That experience should stand to the Tribesmen. It certainly highlights the level teams need to be operating at in order to challenge such a magnificent unit.

SEE ALSO: There Is A Big Problem At The Heart Of All The Hurling Complaints