A storming second-half comeback saw Limerick beat Tipperary 2-29 to 3-21 in Páirc Uí Chaoimh on Sunday. Yet according to Jackie Tyrrell, they should have finished the Munster Final with 13 players.

While the All-Ireland champions dominated the second half, they were fortunate to avoid an early red card after Aaron Gillane, who finished with 0-6, was involved in a striking incident.

"That's a red card in my view, all day long," says Michael Duignan as Aaron Gillane luckily gets away with a yellow for swinging his hurley and hitting Cathal Barrett. pic.twitter.com/Z2ezletKwD

Later in the half, a Seamus Flanagan high tackle also resulted in a booking. Speaking on the Sunday Game, former Kilkenny hurler Jackie Tyrrell said both should have resulted in dismissals.

"This is the stuff that will worry John Kiely. Aaron Gillane, no need for that. Has the free won. Pulls back and lashes at Cathal Barrett, that is a straight red for me. It is not up for debate.

"Seamus Flanagan goes so high and so aggressive with the hurl into Paudie Maher's neck. Once again, that is a red for me. They were both missed. At that stage, the game was over but the Aaron Gillane one could have had an impact. It was early in the second half."

Anthony Daly said he could make allowances for the Flanagan incident but the first was clear-cut.

There is no excuse for Paul O'Dwyer not pulling the red there. Let's face it, that has to be a red card. The comeback hadn't really started. Two points only scored. That was a free overturned. I don't think John Kiely will be overly happy with that.

The Seamus Flanagan one, it is careless. It should not be happening. There were a few incidents over the weekend of that head high tackle that maybe the offenders are getting the benefit of the doubt but there is no excuse for the Gillane one.

The Shannonsiders have always played on the edge, utilising a physically imposing middle third to force turnovers and generate pressure. Earlier this year, John Kiely voiced concerns about the refereeing of the tackle. It is clearly a facet of the game they place significant emphasis on.

Therefore, the borderline Flanagan incident is always a possibility and a risk deemed worth taking. Of more concern will be the Aaron Gillane swing. As Daly pointed out, the Patrickswell man was sent off for similar against Cork in 2018. 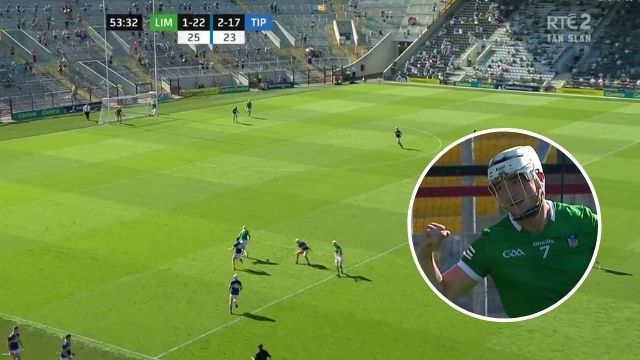