The Longest Roads To September - Can Mayo Top This List In 2017?

If Mayo are to overcome the 'curse' of '51 and finally lift the Sam Maguire this September, it's going to take them a minimum of ten games to do so.

Although many assumed this side already had too many miles on the clock - both physically & emotionally - to trouble Dublin, Tyrone or Kerry this year, in true Mayo fashion, they are still somehow in the mix, and perhaps getting stronger.

If some supporters are concerned that all this additional game time could be detrimental to Mayo's All-Ireland hopes, maybe they should take heed of these other teams who have taken scenic routes to an All-Ireland final - with mixed success.

If Mayo require proof that the unthinkable can be achieved, look no further than Mickey Harte's Tyrone side of 2005. Going for a second All-Ireland in three years, an Ulster campaign that took five games to conclude ultimately resulted in Tyrone going through the back door. Playing five more games before eventually sealing their second All-Ireland title, this Owen Mulligan goal in their drawn quarter-final with Dublin remains a stand-out moment in their extended season.

In an age before the back door became an option for provincial losers, Meath's ten-game route to the All-Ireland final was truly unprecedented. Their Leinster Championship began with a preliminary tie against heated rivals Dublin - it took 4 games to separate them. Subsequently playing Wicklow (twice), Offaly and Laois before even getting out of Leinster alive, their eventual loss to Down in the All-Ireland final pales in comparison to the impact that initial series of games with Dublin had. As Con Houlihan wrote of that epic; 'All Gaeldom looked on agog'.

A memorable year in which Armagh would win their first All-Ireland final, their defeated opponents Kerry had embarked upon an unusually long journey to that point. A 19 year old Colm Cooper was in his first year with the senior panel, and, after avenging their Munster semi-final loss to Cork in the All-Ireland equivalent, the effort that had gone into reaching that point seemed to finally tell as the final came to its decisive moments. When Dara Ó Cinnéide hit over a '45 to put Kerry 0-14 0-10 ahead of Armagh with 53 minutes gone the bookies' favourite seemed good for the win. However, this would be their final score of the game. Some magic from Oisín McConville inspired the 1-02 Armagh required and the Sam Maguire went north.

The only team to lose two games and still win the All-Ireland according to some Clare fans, Offaly's route to success in 1998 was not short of controversy. The first county to win the Liam McCarthy via the 'back door' route, their All-Ireland semi-final clash with the previous years winners Clare ended prematurely. When the referee Jimmy Cooney blew the final whistle, there were still five minutes remaining on the clock - Offaly's fans were far from happy. With Clare's Ger Loughnane believing that the referee's decision should be final regardless of the error (Clare had been 3 points ahead at the time), the GAA decided upon a replay. Offaly would win the replay and go on to beat Kilkenny in the final. 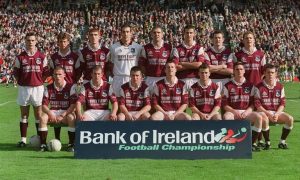 Following the biggest change in format to the football Championship in years (maybe ever), Galway became the first team to win the All-Ireland via the newly opened 'back-door'. Having lost a Connaught semi-final to Roscommon, Galway began this fresh route via a previously unimaginable fixture against Wicklow in Aughrim. Gaining some revenge on Roscommon in the All-Ireland quarter final, Padraig Joyce's performances for Galway that summer would see them overcome Derry and Meath en route to their 9th All-Ireland.

The first All-Ireland final contested between two teams of the same province, it was inevitable that one of them were likely to have taken an unusual route to the final. Despite not having met one another in the Ulster Championship, Tyrone's provincial success would take five games to secure. Armagh, contrarily, lost in the preliminary round to Monaghan and had to travel around the country through every round of the qualifiers. In what became the 'Peter Canavan' final (see above), Tyrone would eventually beat Armagh and claim the county's first All-Ireland title.

SEE ALSO: Mayo's Hectic Schedule Could Be The Very Thing To Drive Them On