The 80s and 90s were decades of revolution in hurling with seven different winners of Liam MacCarthy. The noughties belonged to tradition, and more specifically Kilkenny’s relentless excellence. Our current decade? A mixed bag of continued Kilkenny hegemony followed by shoots of revolution heralded by Galway and Limerick victories over the last two seasons.

So when we look back in years to come, what will we remember? Chances are, like all periods in the GAA’s history, we will recall the great players that have illuminated our summer Sundays. As it stands, one from two of those great players is poised to close the decade wearing the crown of hurling’s premier player.

Barring a Noel McGrath masterclass, either TJ Reid or Seamus Callanan will be crowned Hurler of the Year after Sunday’s finale. Reid is favourite at odds of 5/6 but Callanan has a live shot at 7/4.

For Reid, it would be a second award and a fitting reward for a decade of magic. Callanan has never received the ultimate individual accolade and yet his decade has been marked by both explosive performances on the sport’s biggest days and a consistency that when examined in the guise of cold hard scores surpasses even TJ.

Throughout the last ten years, at different times, nine different teams have been genuine All-Ireland contenders. Seamus Callanan has played 43 championship games against these teams in this period, and he has hit an
average of 3.92 points from play per game. Reid’s return in 45 games against the same opposition comes in at 2.3 points per game.

For the Drom-Inch man, this is a phenomenally consistent level of scoring to sustain over a decade of high level hurling. It is all the more impressive when you consider that for the early years of the decade from 2010 to 2013, he was a peripheral figure in the Tipp attack and only registered more than the aforementioned 3.92 average from play on two occasions in those four seasons.

Change came one Saturday night in July 2014 in Thurles. 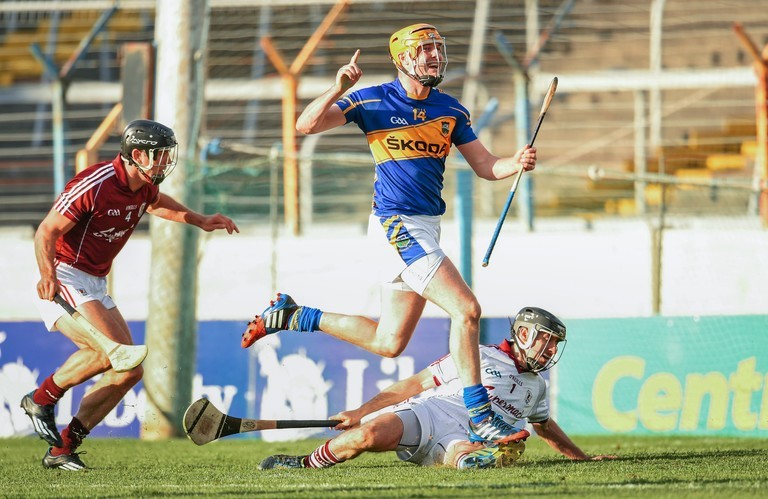 Galway arrive for an All Ireland SHC qualifier weary from two battles with Kilkenny over the previous 13 days and ill equipped for the storm that is coming.

Tipp are smarting from a second successive Munster championship defeat by Limerick and all of their frustrations will be released on Galway.

The westerners battle manfully until the three quarter mark, led by Johnny Glynn who is busy introducing the hurling world to his own particular brand of mayhem.

When the surge comes, it is unrelenting and Tipp outscore Galway in the final quarter by 2-10 to 0-01. Both goals come from the stick of Seamus Callanan to add to the one he had snagged in the opening half. The man who will become hurling’s most explosive forward for the remainder of the decade has arrived on the scene.

Over the next 3 seasons, Callanan maintained an average scoring rate from play in excess of 6 points per game against the best teams in the country on championship days. This run stretched over 13 games.

13 consecutive championship games against actual contenders with an average return of over 6 points per game! Consistent excellence.

This run of form concluded with his 9 point haul on All-Ireland final day in 2016. A performance for the ages from a player of the ages.

When the story of this hurling decade is written, Seamus Callanan’s performances in it will require a substantial amount of ink. The last chapter will be completed this Sunday and 2019 has seen his scoring rate drift north of 5 points from play per game again.

A continuation of this rate of scoring will be a substantial building block towards a Tipp victory on Sunday. If Callanan is leaving Croke Park with Liam MacCarthy as his travelling companion, individual awards in this most team-centred of sports will likely be far from his immediate thoughts, and it may be that a virtuoso Reid performance will deny him again, but his contribution to this decade's hurling and his individual transformation from 2014 on has been one of hurling’s most eye catching narratives.

GAA
8 months ago
By Aonghus Ó Maicín
25 Years On, Wexford Hero Of '96 Wouldn't Have A Place In The Modern Game
GAA
8 months ago
By Michael McCarthy
Where Limerick's All-Ireland Final Performance Ranks Numerically
GAA
8 months ago
By Michael McCarthy
Quiz: Can You Name The Top Scorer In Every All-Ireland Hurling Final Since 2000?
Popular on Balls
Football
1 day ago
By Eoin Harrington
'Ronaldo Is A Cod' - Remembering Eamon Dunphy's Infamous 2008 Rant
GAA
17 hours ago
By PJ Browne
The Draw Has Been Made For Tailteann Cup Opening Rounds
GAA
1 day ago
By PJ Browne
Donal Óg Cusack Defends Dublin Hurlers After John Mullane Criticism
The Rewind
2 days ago
By Eoin Harrington
Watch: Brilliant Dermot Morgan Dublin Segment From 'The Travel Show' Resurfaces