When Dublin reached their first All-Ireland ladies football final in 2003, Lyndsey Davey - just into her teens at the time - was in the stands at Croke Park cheering them on, dreaming of one day lining out for Dublin herself.

It doesn't happen for many that the dream comes through a year later.

14 years on from making her Dublin debut, Davey won her third All-Ireland title earlier this month. Whether or not she will go for a fourth - what would be three All-Ireland titles in a row for Dublin - is a decision which will be made this winter.

At just 28, she is considering retirement.

"I'm just going to have to see what the winter brings," Davey said at an AIG event.

I've been playing for a long time. I have big questions to answer as the winter goes on. After Christmas, you'll probably start having the conversations with Mick [Bohan] about going back.

It is a lot of commitment. You do miss out on a lot but I'm very privileged that I've been able to play for Dublin for so long and look at what I've achieved as well. I think Dublin is going from strength to strength and it's a fantastic time to be a part of it.

There is a point in time when you have to look back and see how long can you keep going for. There is a point when your body starts finding it difficult to recover and things get that little bit harder.

I'm definitely not making any decisions as of yet but it is something that I need to sit down and have a chat about.

During her 14 years as an inter-county player, Davey has witnessed the growth of the sport.

"I can see it from the underage - even in my club [Skerries Harps] when I first started playing with the club we never had a female team. I would have always played with the boys up until about U12s.

"Now the female section of the club is nearly bigger than the men's. You can see that it is getting so much support. Even from my club there was over 400 girls that came in to watch the match." 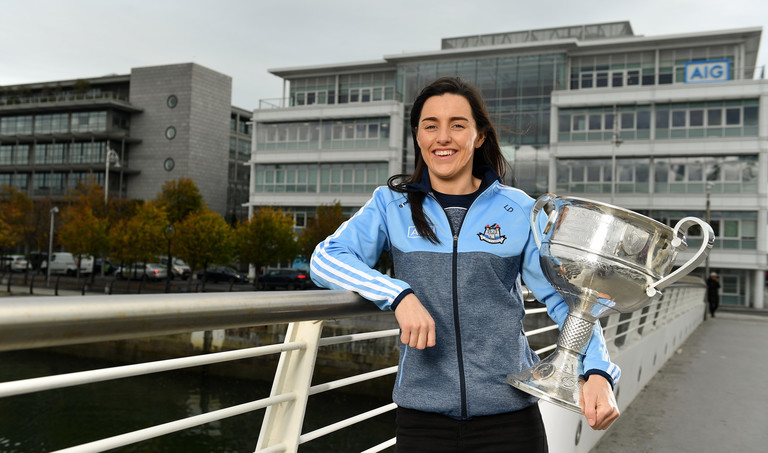 Last week, an ESRI report showed that male inter-county players were spending 31 hours a week on their football careers during the 2016 season. Davey says her time spent with the Dublin ladies isn't far off that mark.

She also has another major commitment in her life: she works as a firefighter.

"It's tough to get used to the shift work and to adjust how your roster works with your football, your timetable, and see where they overlap. And then just making adjustments with your shifts and swapping with people

"I'm very lucky that I work with such fantastic people who allow me to facilitate those swaps.

"This year I'm so used to it now that it hasn't hindered my performance as much as what it probably had in the past.

"Being a firefighter there's so many different attributes like teamwork, leadership, communication skills that fall hand-in-hand with playing football - it is a very team-based job as well.

"They're kind of like your family when you're in there. I know my crew, they were off for the final and they all came in to watch it.

"It was fantastic after the game going over to them with the cup and getting the pictures and stuff with them."

AIG Insurance, proud sponsor of Dublin GAA celebrated the Dublin Footballers’ and Dublin Ladies Footballers’ double All-Ireland victory today in their head office. Members of both winning teams met with AIG Staff and participated in a Q&A with Des Cahill. Representatives from children’s charity Aoibheann’s Pink Tie, AIG’s chosen charity for 2018 also joined in the celebrations and were presented with a signed Dublin GAA jersey.

See Also: 'Last I Heard He Was Working In A Female Prison, Doing Social Work'