'He 100% Deserves A Shot At Dublin. It Is Great To See Him Get The Opportunity'

Michael Darragh Macauley is focused on club matters and nothing more. The Dublin midfielder is adamant Dessie Farrell's outfit have been adhering to the GAA’s intercounty ban.

"We haven’t been involved at all, to be honest," he insists.

"Lads doing their own bits but we’re actually not involved. Everyone thinks we are training 24/7. We have secret underground layers that we meet up for kickarounds. No gossip. Or else if they are doing it, I am not getting told about it anyway."

Macauley is speaking ahead of AIB’s The Toughest Summer, a documentary which tells the story of Summer 2020 and the unprecedented halt to Gaelic Games. It airs on RTÉ One on Tuesday 25 August at 10:10pm.

Whenever they do reconvene, Macauley will be joined by a familiar face. It has been confirmed that fellow Ballyboden St Enda’s man and current coach Brian O’Regan will join Farrell's backroom team. 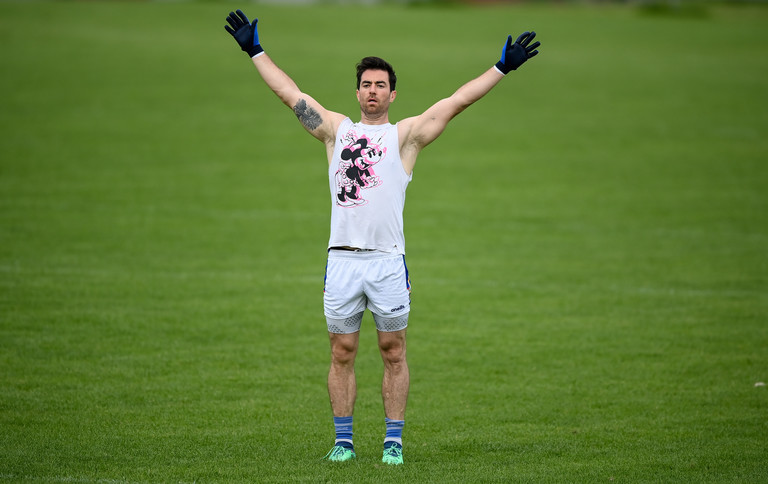 “Brian is great. I would have played with Brian a long time ago. He has gone and managed me a number of times at this stage. I think he has really earned this opportunity because he has pretty much coached every team in the club.

He has won championships with the women, with the hurlers, with ourselves. So, he is definitely not getting drafted in from nowhere. He is someone who has improved as a coach no end, to be honest.

He has really upped his game. He 100% deserves a shot at Dublin. It is great to see him get the opportunity.

Yet there will also be absentees. The quest for six-in-a-row will proceed without 2019 All-Star Jack McCaffrey who has stepped away from the panel.

"I suppose it's tough for any player to walk away, that wasn't easy for Jack, I know that. But he's happy with his decision at the moment and it suits him. From Dublin point of view, we'll definitely miss Jack's psychopathic smile on game day and people are aware he's a big presence in the dressing room.

"I suppose we haven't even got to feel the loss of that yet because we haven't been back in the dressing room since but I think it's an interesting one. Sometimes the grass isn't always greener when you're winning matches and playing football. I'm sure it's going to work out well for him."

Brought to you by AIB and directed by award-winning filmmaker Ross Whitaker, the 50-minute documentary, which features Michael Darragh Macauley among others within the
GAA community, will air on RTE One on Tuesday, August 25th at 10.10pm and will be available on AIB’s YouTube channel from 1pm on Thursday, August 27th.

GAA
3 months ago
By PJ Browne
Emotional Day For The Smalls As Ballymun Dethrone Ballyboden
GAA
5 months ago
By Dylan Ryan
Boden Put 5-11 Past Vincent's In Heavyweight Dublin Clash
GAA
1 year ago
By PJ Browne
In Pictures: Joy For Ballyboden St Enda's As They Win Leinster Title
Popular on Balls
Football
10 hours ago
By Michael McCarthy
Is Frank Lampard In Danger Of Doing A Steve Staunton To His Chelsea Legacy?
Football
11 hours ago
By Donny Mahoney
Report: Shamrock Rovers Wunderkind Kevin Zefi Very Close To Move To Inter Milan