Introducing The Best Man Marker In The 2021 Championship

Padraig Hampsey has always been acutely aware of his weight. As a youth, he was a talented boxer, travelling around Europe and America as part of a Northern Ireland select squad.

He regularly credits his Gaelic football skillset to his upbringing in that sport. It instilled an appreciation for combat and one-on-one battles.

Now staying in shape is his passion and profession. The Tyrone defender runs a gym and is a qualified personal trainer. His dedication during the season is renowned. Discipline and organisation to maintain fighting form. 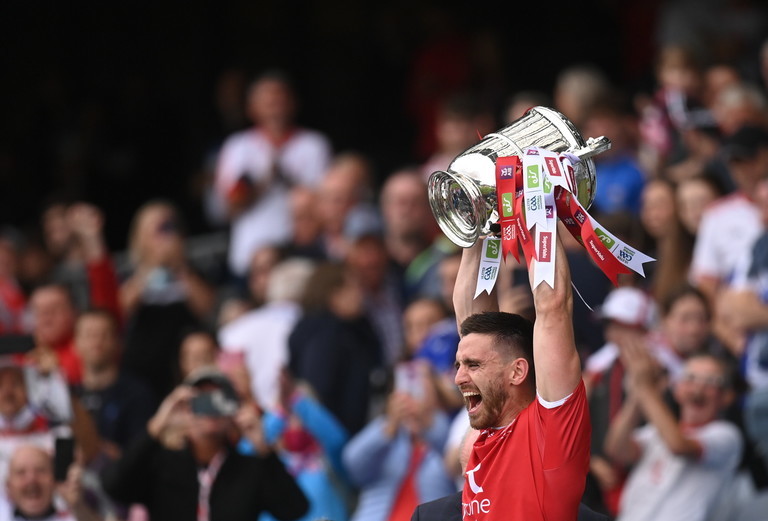 In the offseason, he takes a well-earned break and allows himself to gain as much as a stone.

When it comes to man marking, Hampsey is now a heavyweight, capable of mixing it with the game's best sharpshooters on the edge of the square or out the field. In the 2021 Championship, he has marked Cavan's Thomas Galligan, Donegal's Michael Murphy and Monaghan's Conor McManus. Three All-Stars. Their combined total from play is 0-2. His is 0-1.

It is a remarkable record, only rivalled by Kildare's Mick O'Grady. Across three Leinster championship games, the full-back marked Offaly's Niall McNamee, Westmeath's John Heslin and Dublin's Con O'Callaghan. Their return was 0-2 from play. He also scored 0-1.

Of course, the true measure of solid defensive structure is the collective success, not individuals. At the same time, both players demonstrated imposing attributes to garner that small total.

Another reminder, if it was needed, that the art of defending is far from dead.

Hampsey took over the captaincy last May from Mattie Donnelly. It was the first of several changes under their new management but not an unsurprising one. Feargal Logan picked him as the Tyrone U17 captain when he coached that team.

"He is a leader. The last Tyrone man to captain the minors in an Ulster title. Boxing gave him footwork, the ability to work off both sides, agility, mental toughness and a willingness to bounce back from adversity," says Mickey Donnelly, who coached the Red Hand to that minor success in 2012.

"I am coaching and working with young people for a long time now. The ability to command a dressing room, to get people to follow you down the steps of hell, it is slipping. From a coaching perspective, are we coaching that enough? Showing lads what leadership looks like?"

Leadership is all about your actions to me. Messages in WhatsApps and speeches, that is not it. That is the thing that stands out about Paidi. Of all the lads I had at the level in Tyrone and Derry, he had that x-factor in terms of leadership.

I could name on one hand the lads who had it. He definitely did.

In their opening game against defending Ulster champions Cavan, the Tyrone captain was tasked with tagging Thomas Galligan on the edge of the square. Due to Lohan and Brian Dooher's new approach, he was often left exposed one-on-one. Yet as the example below demonstrates, this was not an issue.

As Cavan attack, Hampsey (red) is fixated on Galligan. 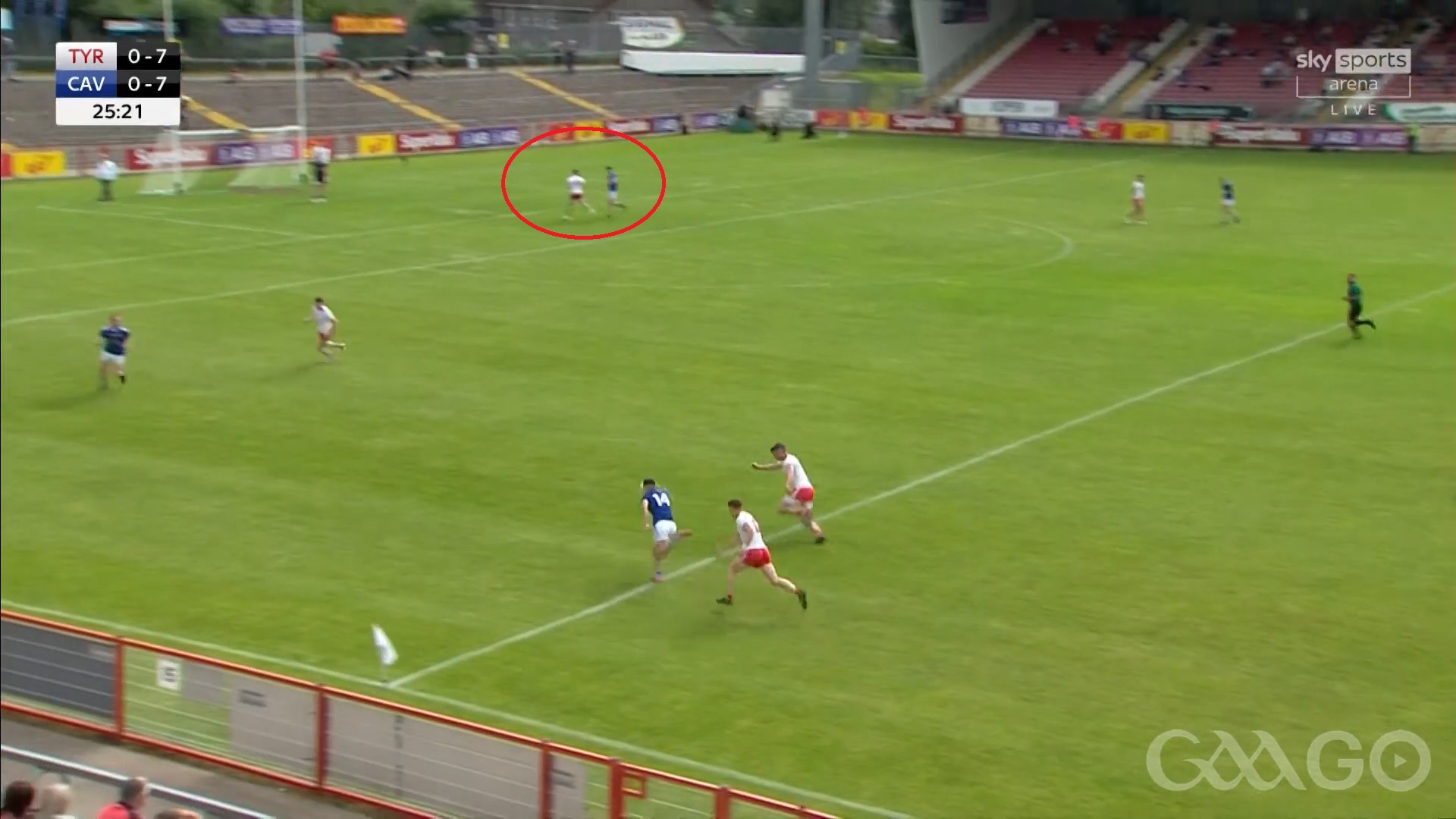 Oisin Brady drives forward, Hampsey reads the play and drifts across once his man is no longer in a dangerous position. 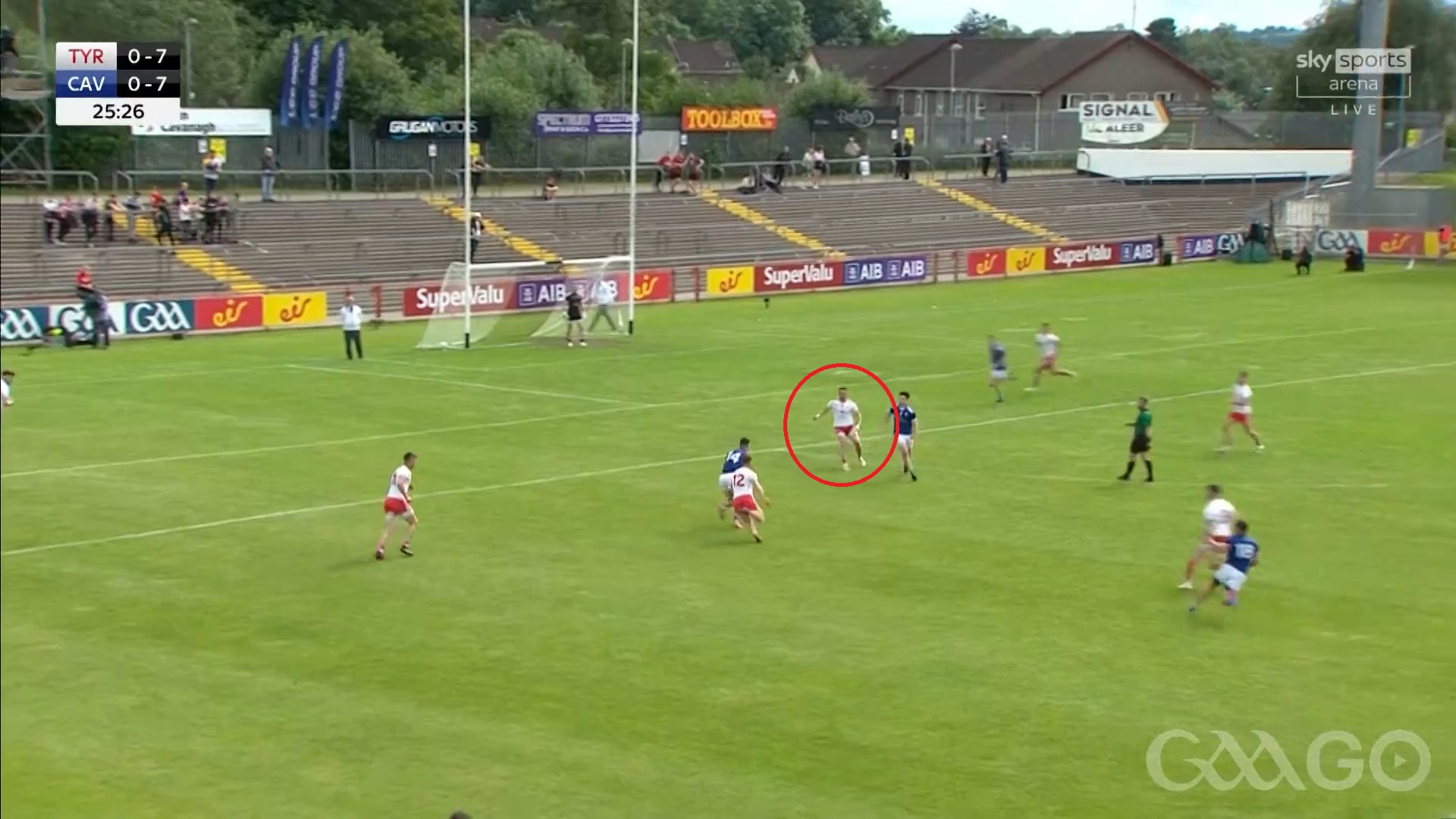 He executes a perfect tackle. 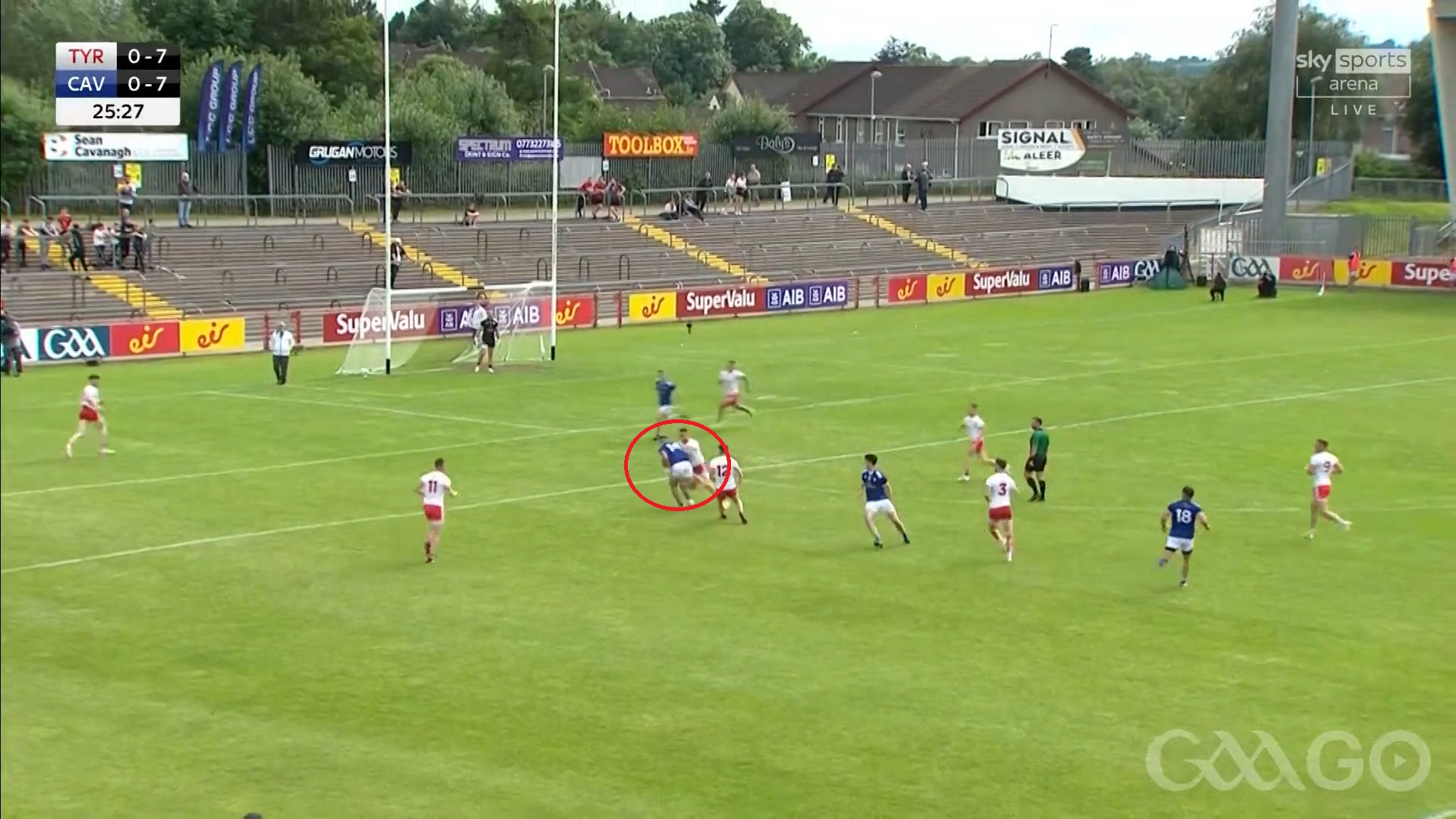 Tyrone are awarded a free. 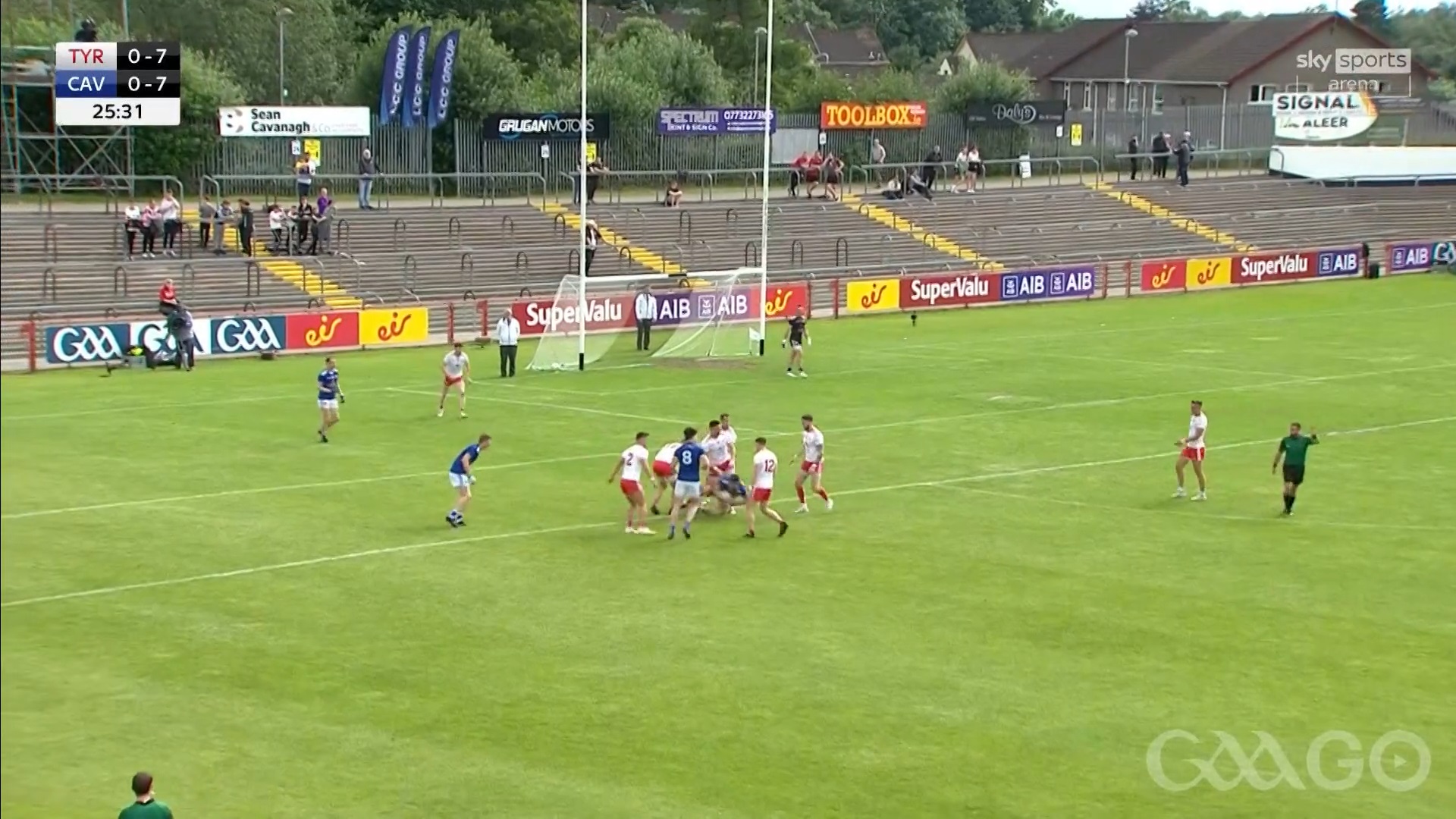 This is an area of the game Hampsey excels at. His strength and tenacity in the tackle ensure it is a gruelling task to try to run past him.

Against Donegal in the Ulster semi-final, Hampsey consistently dispossessed attackers when they attempted a penetrating run. 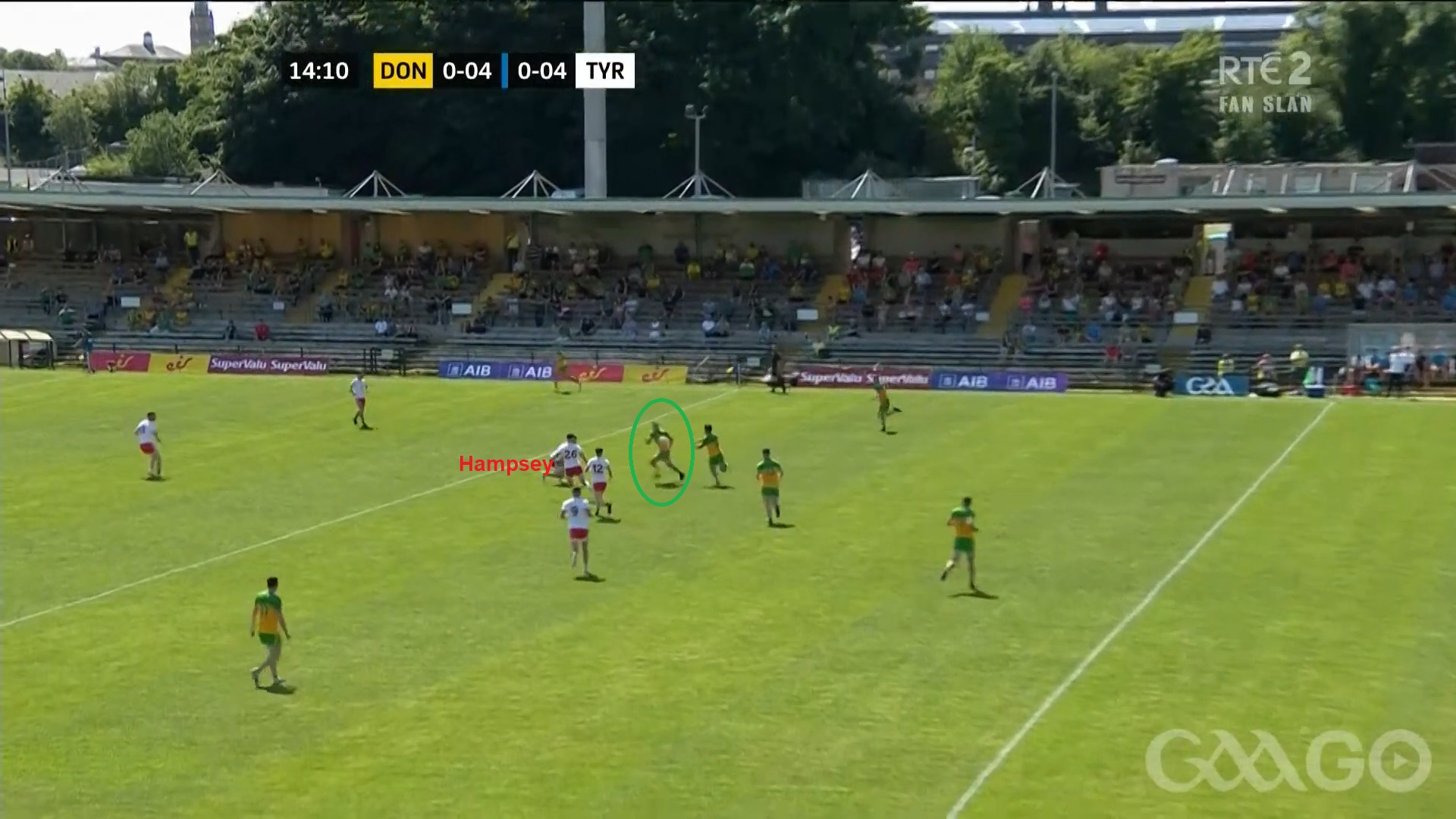 He gets a strong hand in and wins the ball. 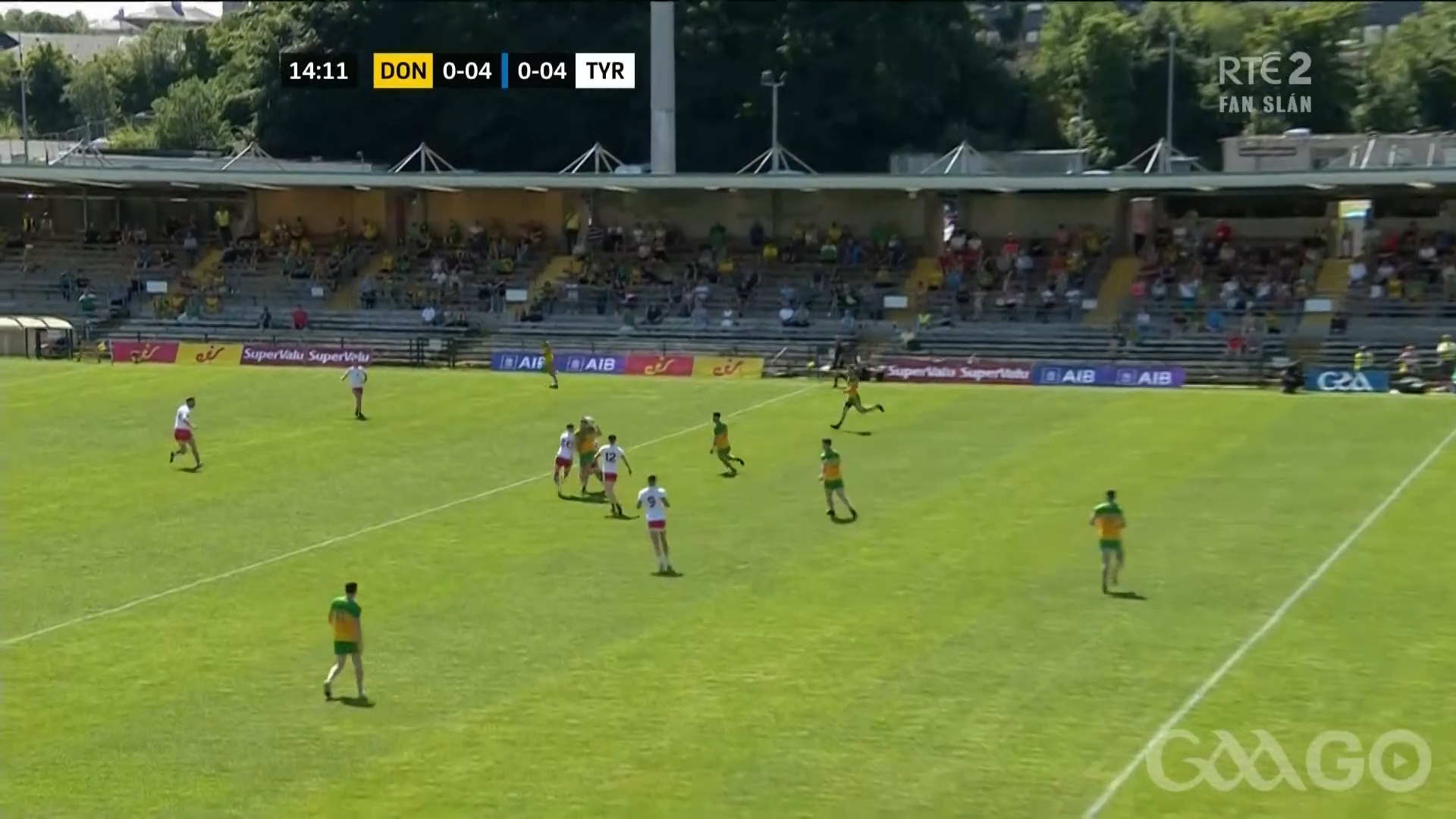 The 2018 All-Star is an on-field organiser. His ability to direct his teammates and correct their structure is impressive.

On Tyrone's kick-out, the 27-year old did not follow Galligan (blue) out the field. 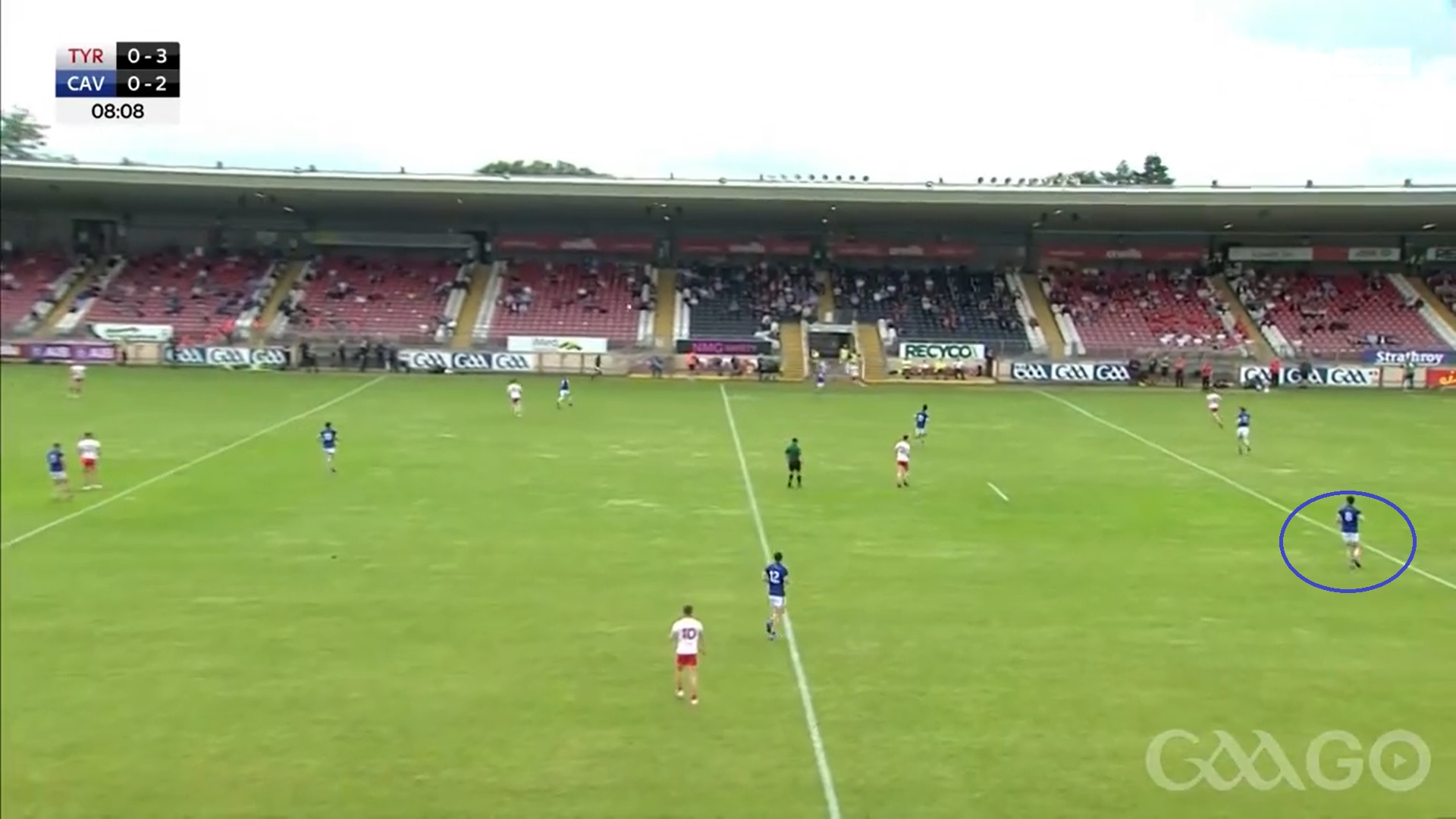 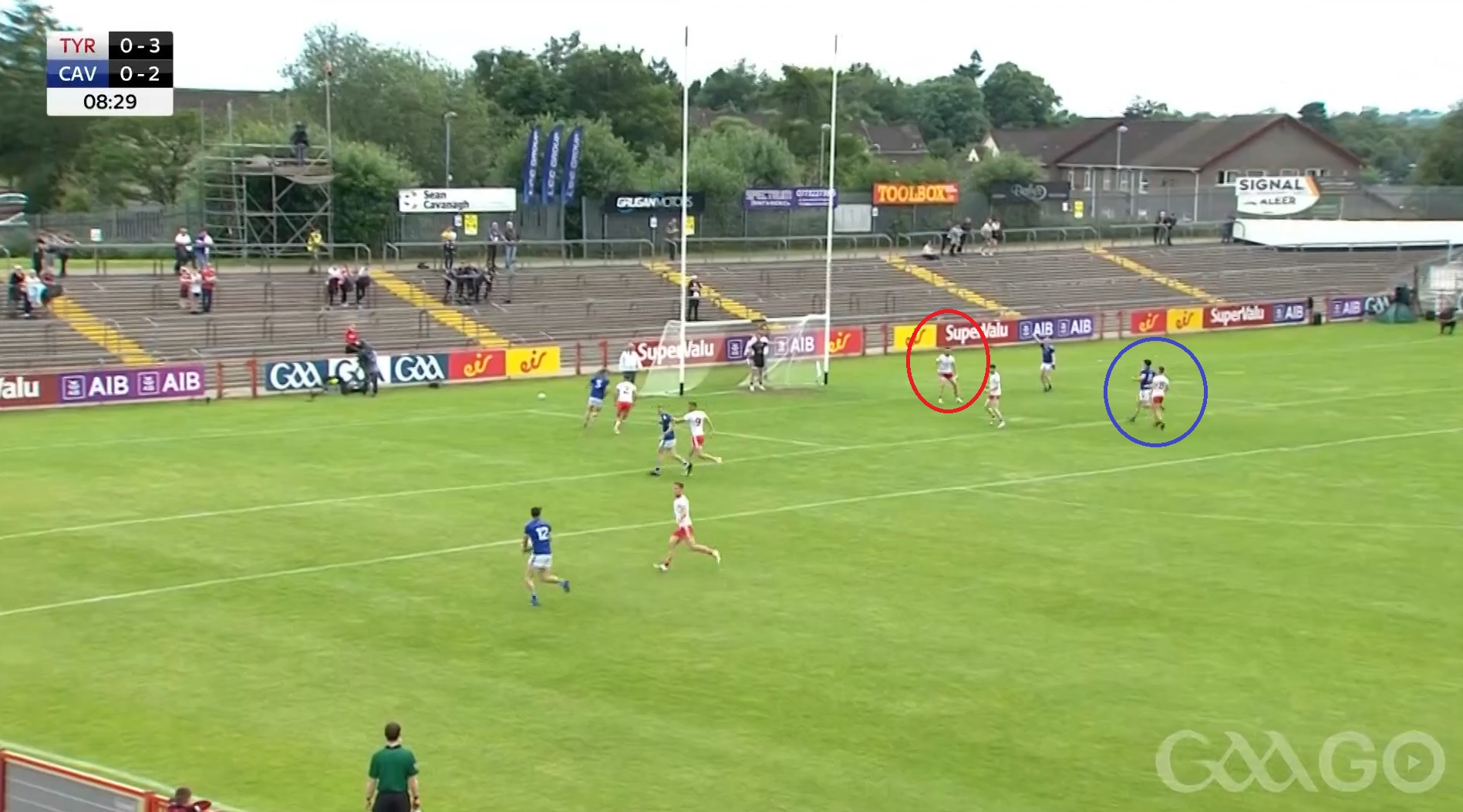 Hampsey starts pointing and organising the defence. Sludden is instructed to drift across. Hampsey marks Galligan on the edge of the square. 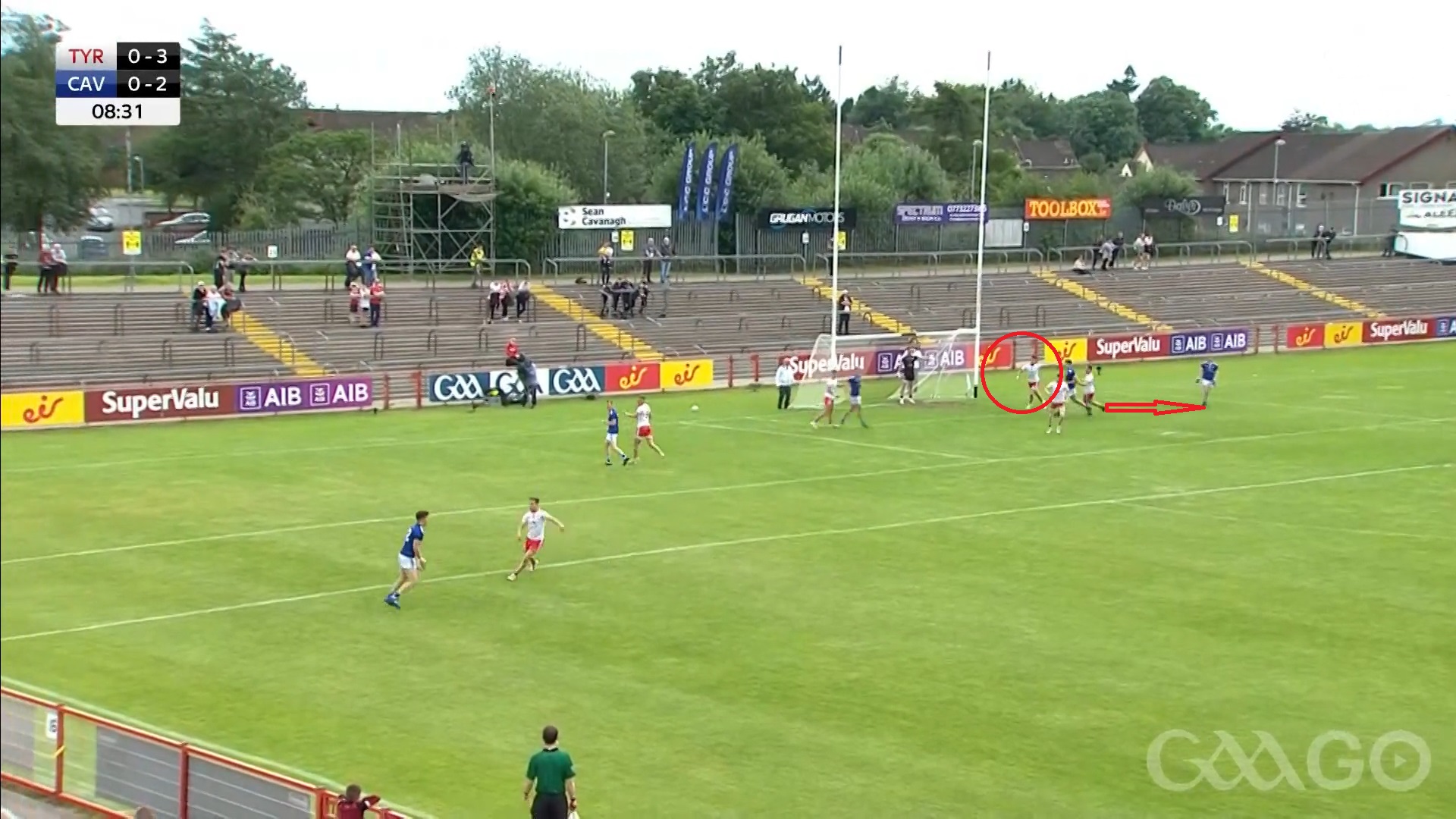 Tyrone have transitioned to a strong defensive set with their desired match-ups. 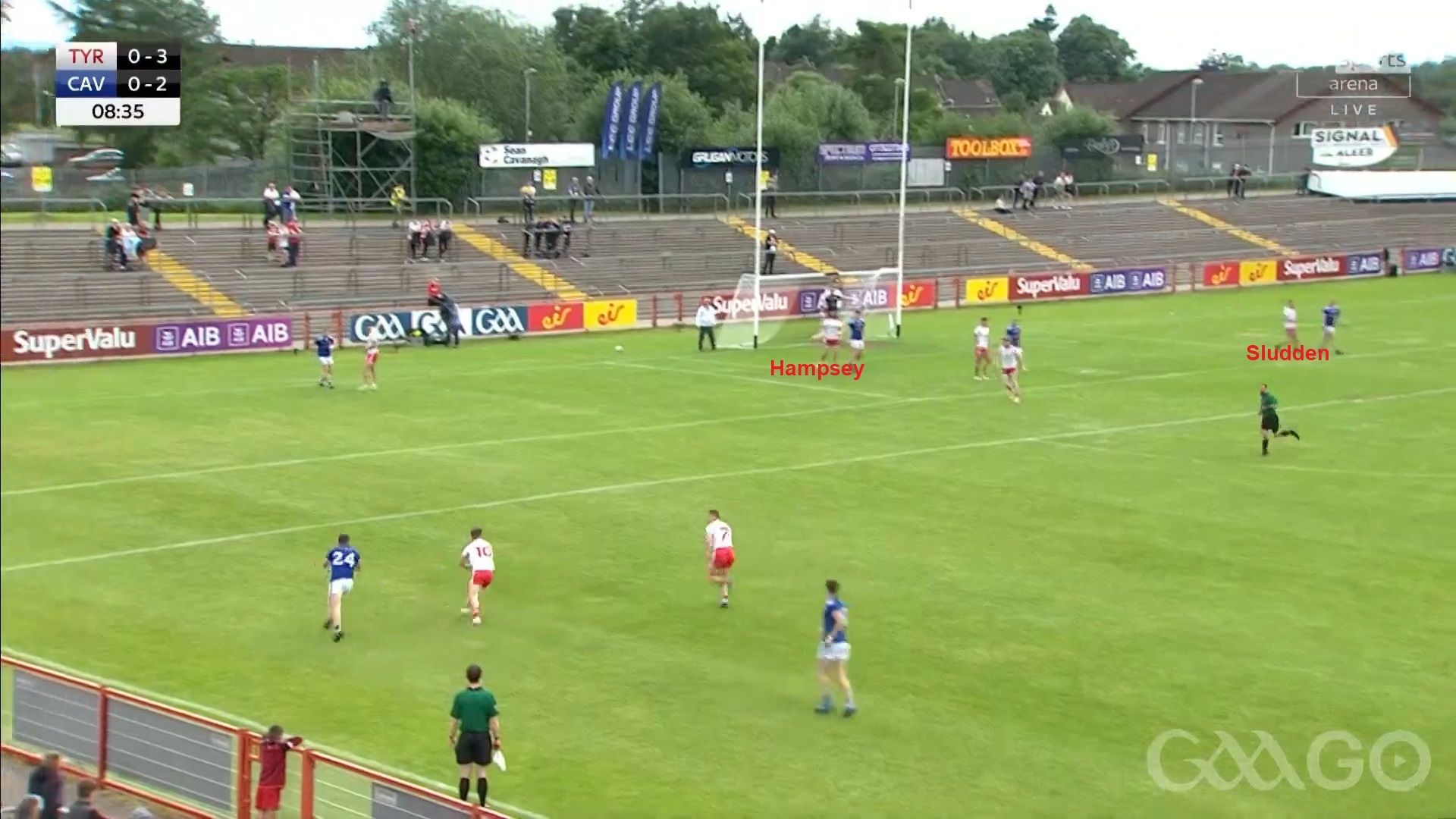 On the other side of the ball, Hampsey followed Galligan and contested Raymond Galligan's kick-outs. 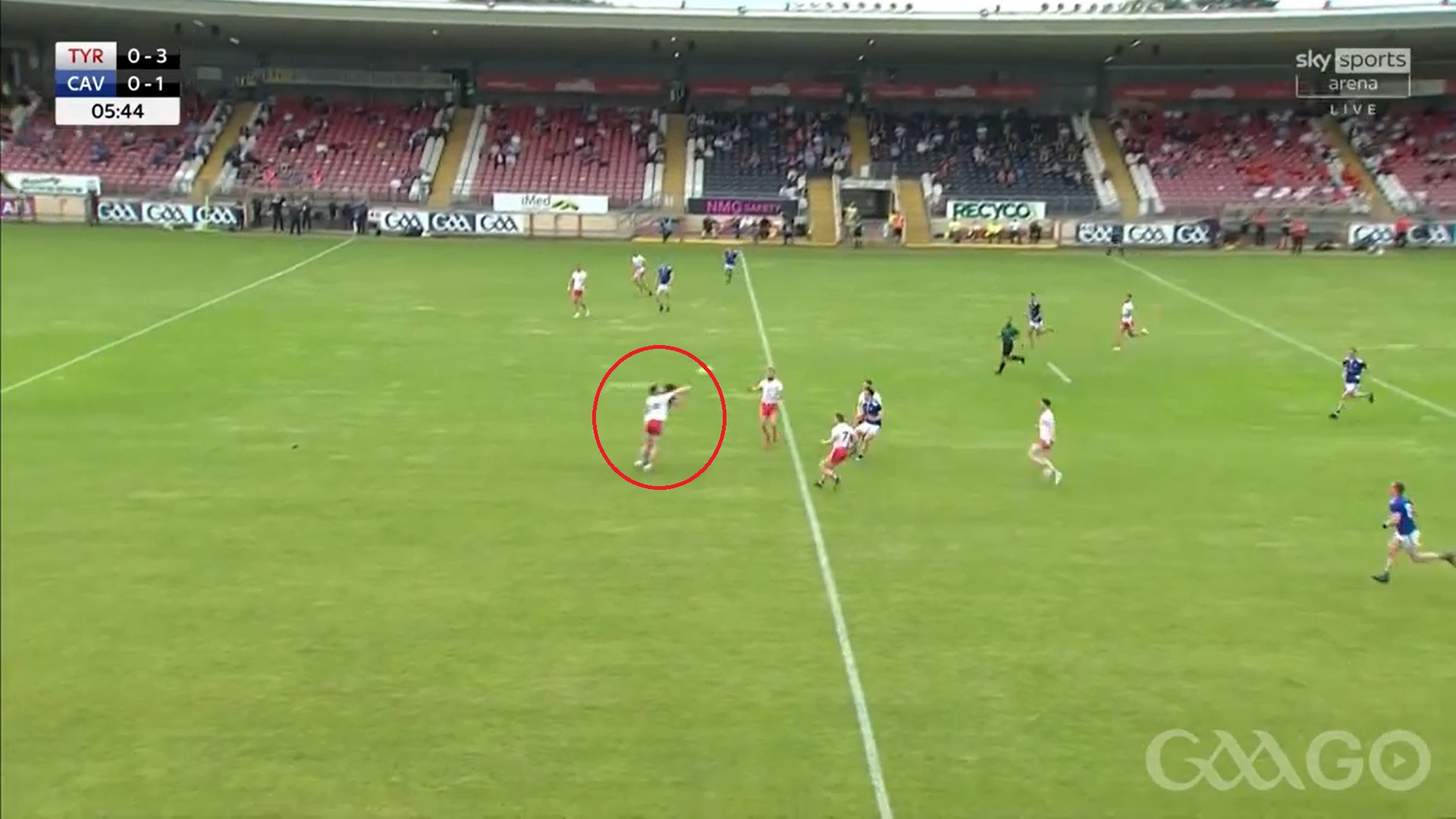 In the Ulster semi-final, Hampsey was tasked with tracking Michael Murphy. This is a role he had success with in the past, particularly in 2017. After the Donegal captain was sent off, he operated principally as a sweeper.

Regardless of the location on the pitch, Hampsey is a touch tight man marker. 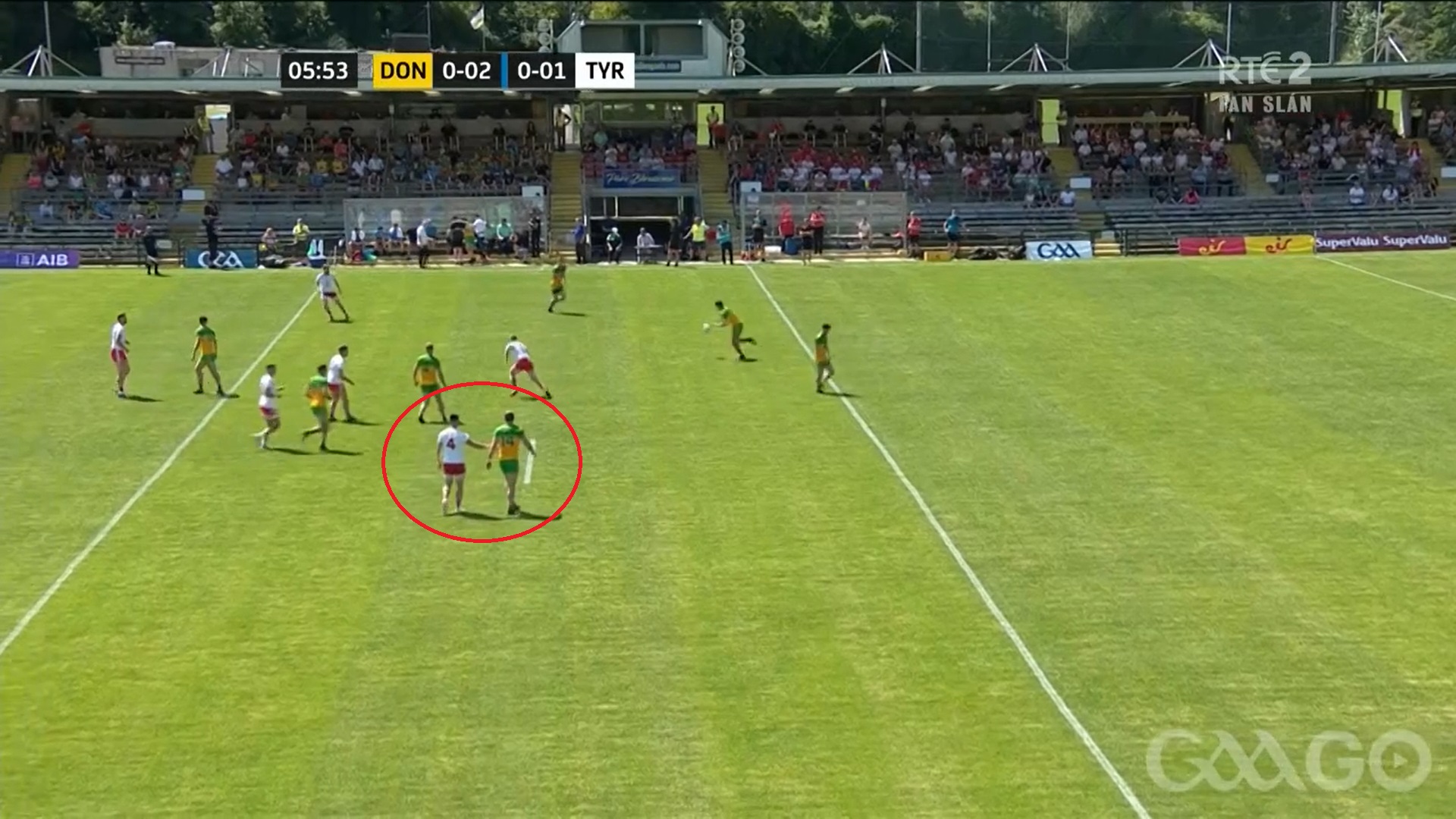 The same was the case in Croke Park last weekend. In the Ulster final, he restricted Conor McManus to a single point from play. 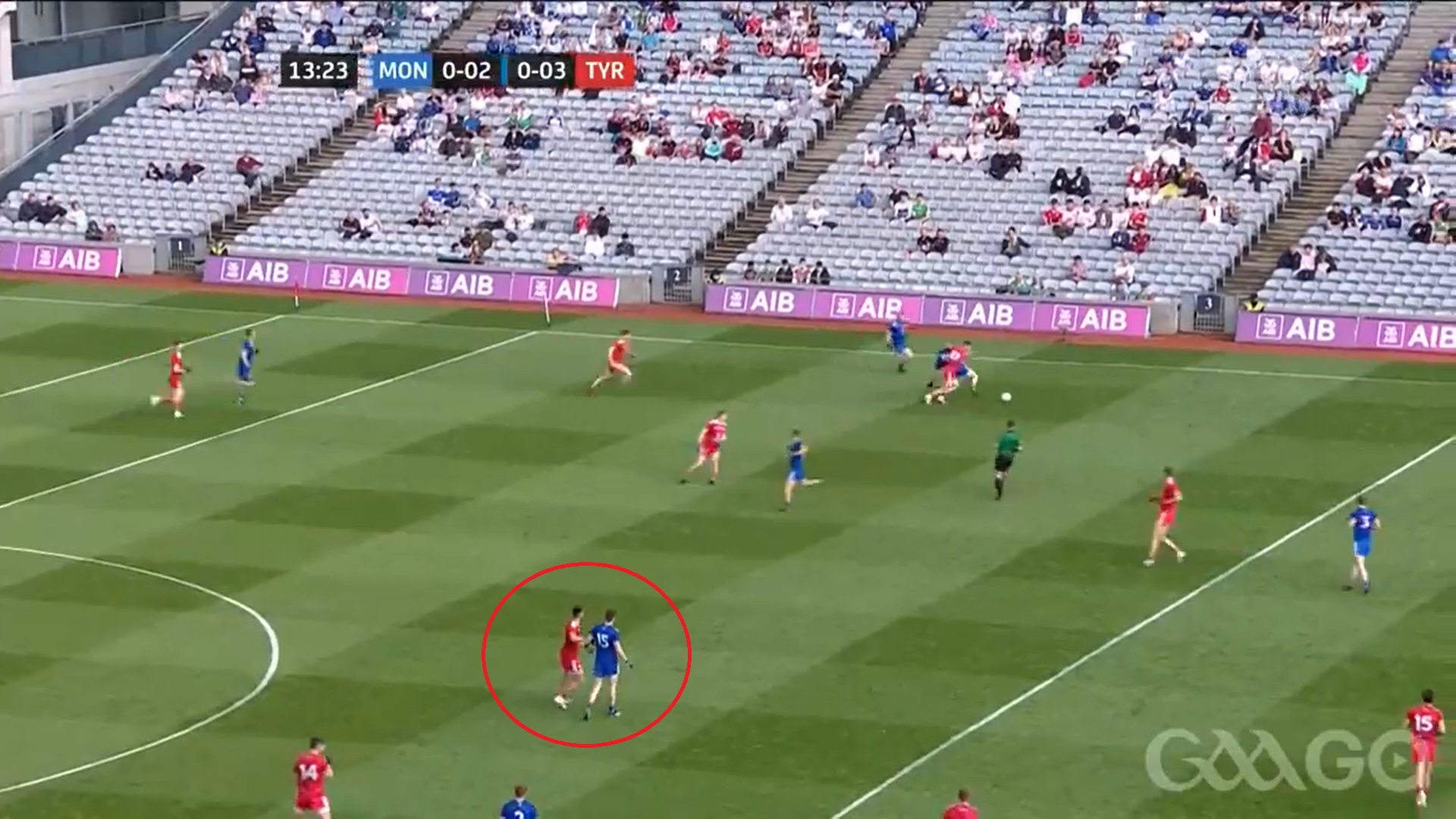 For Donnelly, the Coalisland club man is not just a defender. As the modern game continues to evolve, its proponents continue to try and produce a certain type of player. Hampsey epitomises it.

"He is a reflection of the modern-day footballer. He can mark anyone but he can advance. He can play around the middle. The man marker role isn't just inside. Some people are touch tight close to goal but then out the field, they are relaxed and loose. Paidi never does that.

"In the 2017 championship, Paidi scored eight points. He can hurt you both ways."

What does that mean for the All-Ireland semi-final? The last time they met Kerry at the same stage, Conor Meyler was parachuted in to try and hinder Sean O'Shea. Peter Keane's centre forward has kicked on since then and is now the leading contender for footballer of the year.

Hampsey's physicality in defence and capacity in attack means he is best suited for the role. Few are capable of shackling Kerry's high-powered forward line on recent form. Their route to the final four is littered with flattened opponents. The captain gives Tyrone a puncher's chance. 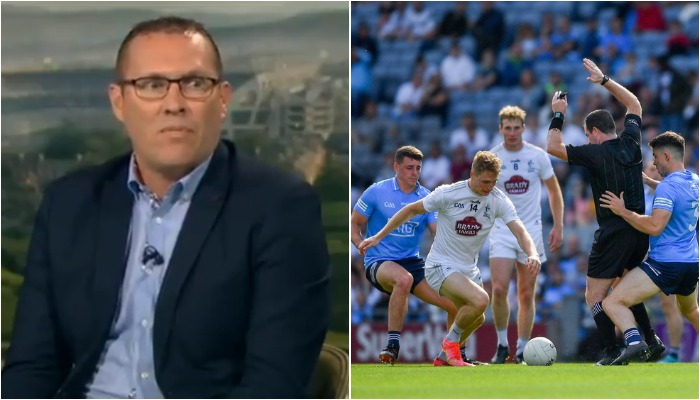