Dom Mills was surprised when Cormac O'Keeffe asked if he'd captain the Manhattan Gaels novice team. Though he was probably the oldest player on the panel, others had more experience. There were also better footballers.

What Mills does have is reliability - he always turns up. He also knew that the captain needed to have a light-hearted approach; take what was supposed to be a social team too seriously, and it might turn people off.

In September, Manhattan Gaels won New York's inaugural Novice Football Championship - a competition intended for players over 35 along with those who'd never played the game before - with a fullback line their captain describes as "eclectic". All three players found Gaelic football via different routes.

Mills grew up in Wagga Wagga, a New South Wales city five hours north east of Melbourne. He played Aussie rules growing up, but "was never a particularly amazing athlete back in the day," he tells Balls.

He moved to China in his mid-20s to work for Irish company Glanbia. While there, his friend Ronan McGuinness suggested they start a team. The Suzhou Éire Óg was founded in 2009, as was Mills's decade-long affinity for Gaelic football.

The club won the first tournament it entered at the All-Asian Games, beating a more fancied side under lights in the rain with Mícheál Ó Muircheartaigh commentating. He probably didn't realise at the time, but in winning a final with the Kerryman on the microphone, Mills was living the childhood dream of many an Irish contemporary. 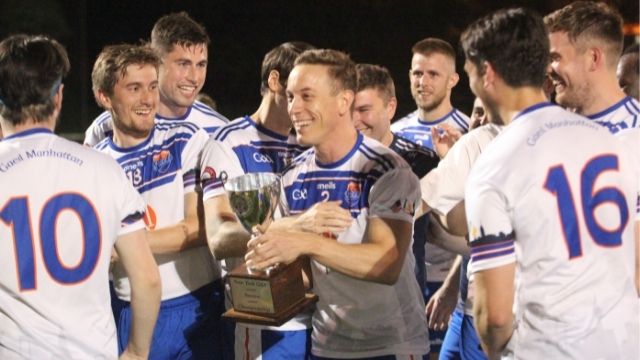 The skills of handpassing and kicking came naturally enough, Mills says, but "it probably took me about five years to learn how to solo with a bit of a pace". By that stage, he'd moved to Singapore, where he continued to play, and win the odd tournament.

In January 2020, he moved to New York, and began looking for a new club. Manhattan Gaels was the first Google hit.

"As soon as I met the guys, I knew that it was the right type of club," says Mills.

"They were easy going, friendly, took me in straight away. I worked well with Cormac O'Keeffe, our manager. I think he was one of the first people I met."

For Mills, it must be reassuring to think that wherever he goes in the world, he will have a ready made community into which he can slot. It also helps that he loves the sport.

"Gaelic football was better suited for me because it's a game where, if the agility and speed is there, the size of the guy doesn't matter so much," he says.

"I loved it. I honestly think it's the best form of football in the world."

Liberty Mthunzi turned up at a Manhattan Gaels running club training session with the aim of getting fit for his upcoming wedding. He left thinking he'd need a pair of football boots to go with his runners.

"Cormac was at my very first training session with the run club and he's like, 'We're starting a Gaelic team, do you want to join?'" Mthunzi explains.

Mthunzi had a minor headstart on some others in the novice team: He'd played one game of Gaelic football before, though, it put him off until he reached his late 20s.

"I'm originally from Zimbabwe," he says.

"My dad worked for Intel, Mom was a nurse, and Intel wanted to move my dad from South Africa, where he worked, whilst we lived in Zimbabwe, to Ireland."

The family bounced around Kildare and West Dublin for a while, living in Leixlip, Maynooth, and Lucan before settling in Kilcock. 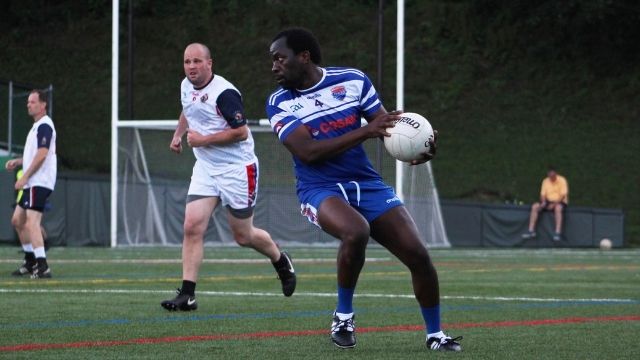 "I think I played one match when I was in school. The lads were a bit rough. So, I didn't like it compared to soccer; there was lot of like punching. Funnily enough, I did get into boxing!"

Mthunzi studied biomedical science at Maynooth, and later did a PhD in UCD. During the latter, he spent time at a conference in Dallas. There he met a professor who would later recruit him to be a research scientist in his lab at Columbia University in New York.

"Getting into something like Gaelic football," said Mthunzi, "it was nice because you're you're kind of doing something that reminds you of back home, because during the pandemic, you hadn't seen a lot of family.

"Gaelic Park is basically like going to your local GAA club back home. It's all Irish, they serve Irish food, a lot of Irish music and there are accents from everywhere in Ireland."

Kevin Shroff was on a tram in Amsterdam when he thought he saw a hurley sticking out of someone's bag. He needed a second glance to make sure it wasn't a field hockey stick.

Shroff, a first generation American, was born and raised in Queens by an Irish mother and Indian father. His mother hails from the Laois/Kilkenny border, and he spent summers in Ireland on the family dairy farm. It was there that he learnt a bit about hurling.

"I went over the guy and started up a conversation, and he was saying, 'We don't have a hurling team out here, but we have a football team," says Shroff.

That was 10 years ago, and Shroff has been playing on and off since. He moved to Singapore in 2015 and joined the same club as Dom Mills. Shroff moved back to New York three years ago, and when Mills moved there last year, plans were hatched to get the team back together. 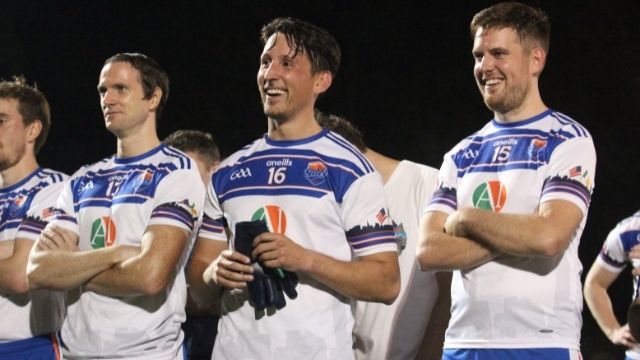 "I remember talking to Dom at the beginning of the year," says Shroff, "and being like, 'Do you want to do a triathlon?' And Dom was like, 'Absolutely not! But I am joining the Gaelic football team'."

Mills talked up Shroff's reliability as a defender to Cormac O'Keeffe. Five minutes into the first game, he tore a hamstring.

"It's nice that it's like taken seriously," says Shroff.

"Especially the three of us, we work pretty hard when we're out there on the pitch, but then on the same note there's just like a certain level of the craic.

"My mother, my aunt and my father came up to Gaelic Park for the final. I even sent the link back home to cousins and uncles - they got a kick out of it.

Manhattan Gaels won the championship with a 5-3 to 1-7 victory over the previously unbeaten Hibernians in the final. Considering that many of the team didn't know each other before this season, it's curious to note that what stood out for Shroff was the team spirit.

"Throughout playing sports most of your life, you don't necessarily always have that, you know, there's always some people who are a bit like a hard ass," he says.

"There was a great team spirit across the board and then great, a great WhatsApp chat.

"A lot of people walked into this, especially during like a covid time - I'm born and raised here, I still have tons of friends and family - but I'm sure there's people throughout the club who are distant from their family, can't go back home." 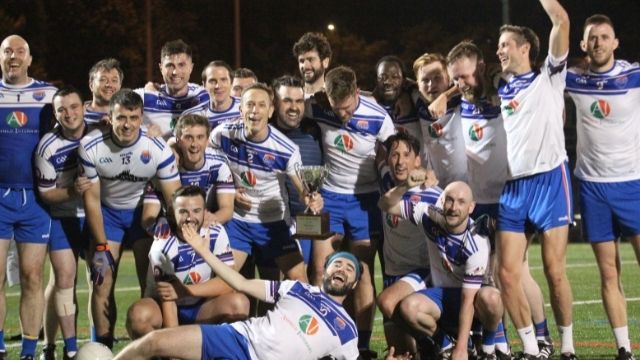 GAA clubs beyond Ireland's shores were initially established as outposts of Irishness, places where those who immigrated could go and experience a part of home.

They have become more than that. It is no longer just born and raised Irish for whom they are a meeting place.

"I read an article the other day about the ways that men and women bond differently with friendships and things like that," says Mills.

"When we get together and we do something together, that tends to solidify things far more than any conversation or whatnot.

"Through the GAA, I would say I have more Irish friends than I have Australian friends these days."

Quiz: Can You Name Every 2021 Senior County Football Champion? 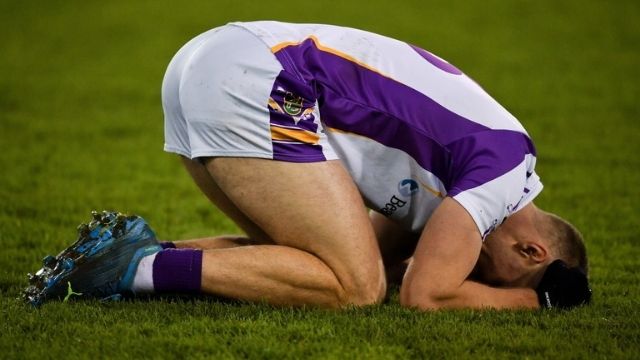