10 Years Into Cork Career, Division 3 Not Where Collins Wants To Be

Mark Collins enters the tenth season of his inter-county career with Cork far from where they started in 2011. That year, Cork won the Division 1 title, beating Dublin in the final. In 2020, the aim is simply getting out of Division 3 to ensure they play in the top tier of this year's championship.

"It's been a bit of a disappointment, to be honest," said Collins at the launch of the Allianz Football League.

"When I first came on the panel, we were competing for Division 1 and, you know, the aim was to win the All-Ireland. Plus I was involved in a couple of very good U21 teams and you were hoping that the breakthrough was going to come.

"Unfortunately, that didn't happen and we've chopped and changed with managers over the time and haven't performed as players.

"To be down in Division 3 is not where we want to be. It's up to us now and a few of the younger players coming through to put that right."

While they may be a rung lower starting this year, there is more positivity about the panel. They reached the Super 8s last year. Though they didn't win a game, they were competitive with Dublin for 60 minutes, picking up some valuable lessons as they eventually lost by 13 points.

"Definitely there’s a bit of a feel-good factor," Collins said.

"Starting back this year was maybe a small bit easier the way things finished last year. The under-20s and minors [winning All-Irelands] was a huge boost to the whole county. Even for the supporters, trying to get them back on your side maybe a small bit, it definitely helped." 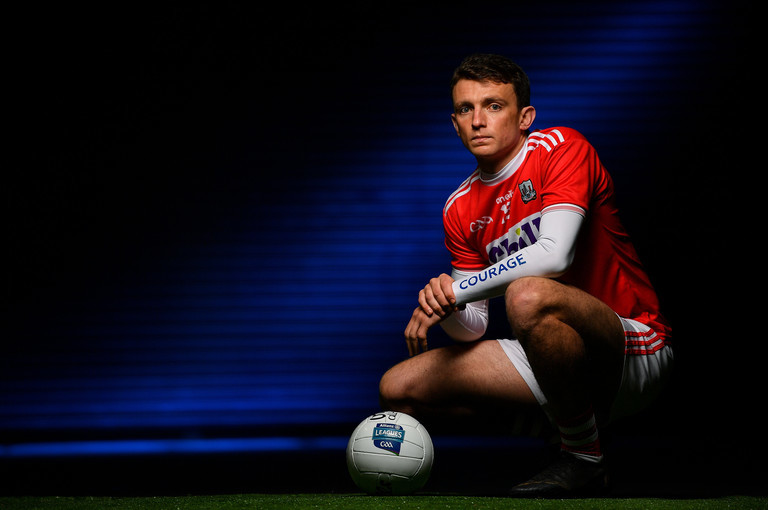 In attendance at the Allianz Football League 2020 launch in Dublin is Mark Collins of Cork. 2020 marks the 28th year of Allianz's partnership with the GAA as sponsors of the Allianz Leagues. Photo by Brendan Moran/Sportsfile

To his backroom team this year, manager Ronan McCarthy has made additions.

"Cian O’Neill has brought serious experience you know, he’s been working with top level inter-county teams for over ten years so that’s a huge bonus for us," said Collins,

"Also, Kevin Smyth has come in as S and C coach, he’s worked with Stade Francais for seven/eight years - he has serious experience as well, so that’s a big lift to have him too.

"To be fair to Ronan since he's come in, he's always tried to improve. He's willing to put in any time he can to help us."

In the Cork full-forward line last season, Collins formed a dangerous partnership with clubmate Brian Hurley. At times, it looked almost telepathic. For Collins, it was no surprise that he and Hurley - a player who has come back from devastating knee injuries in recent years - clicked so well.

"I get on very well with Brian, he's one of my best friends," said Collins.

"We lived with each other in Cork for four years so we probably know each other like the back of our hands.

"I've played with Brian since I was 14 or 15 so I'd know him unbelievably well.

"We're probably lucky, we came on the Castlehaven scene together and we played an awful lot of matches together so I suppose you just get used to each other over the years.

"To be honest with you there's probably not a lot of fellas who would have got back from where he came from. I remember there was one night in Douglas when he thought it was over for him. He was at a low place but the drive he showed to get back was absolutely crazy.

"But that's the kind of personality he has. If you knocked him down 10 times he'd probably get up 11 - he's that pig-headed. He's just a strong individual and that's the way he is."

Alan Cadogan: 'Being An Inter-County Manager Is A Demanding Job. In Cork, We Don’t Pay Managers'