Revealed: The Best Mayo Team Of The Last 30 Years As Voted By You

After a week of debate, the votes have been tallied, and we can reveal our sixth 15 for 30 team - Mayo's best county football team of the last 30 years, as voted by the public.

Over the course of the week, thousands of votes were cast for over 70 players, but in the end, only 15 could be named.

Some of the positions turned out to be straight forward. After a career of being constantly in and out of the Mayo goal, the voters didn't share the hesitation of successive Mayo managers and Ballina's David Clarke was the almost unanimous decision in goals, getting the fourth most votes of any player.

The likes of Keith Higgins, Lee Keegan, Colm Boyle, Liam McHale all made it in easily enough. The voters' decision to vote for Aidan O'Shea as a midfielder meant less dilemmas up front too, with five of the six forwards getting in with a large number of votes to spare.

The biggest battle was for the other place in the forward line. In the end, Kevin McLoughlin beat out his current manager and two time All-Star James Horan  by just 20 votes for the right-half forward position.  Full back was also a keenly contested position with Kevin Cahill getting just marginally more votes than both David Heaney and Ger Cafferkey. With the split votes, it meant Cahill's number of votes were well down the overall pecking order, but none of the players above him for viable for a number 3 slot.

Current All-Star Paddy Durcan can consider himself very unlucky, having received the 15th most votes of any player but not made the team. Durcan just lost out to James Nallen for a place in the half back line, but did receive a huge amount of votes, but couldn't be placed in the team. 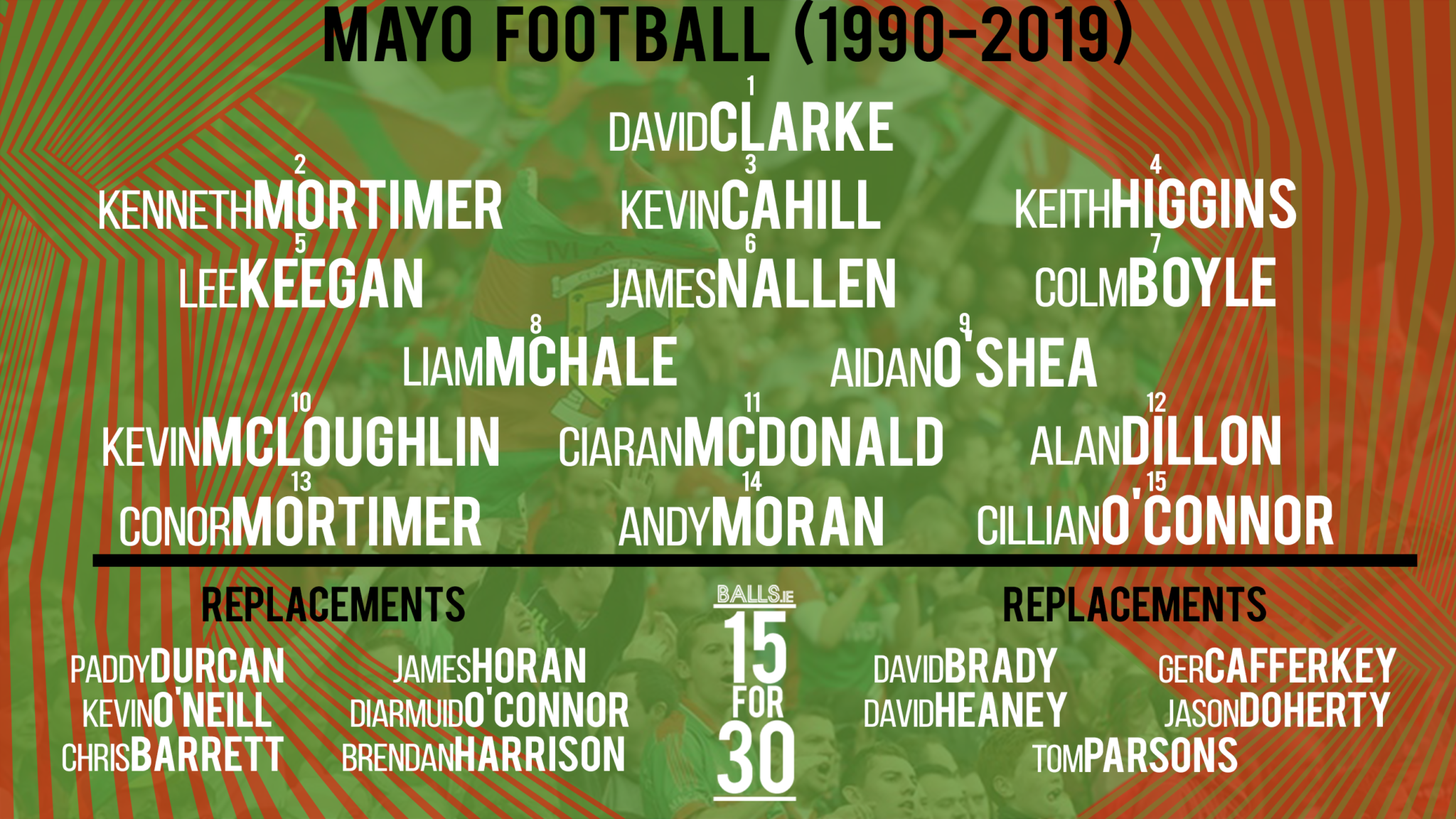 Not a bad team!

In the end, 9 of the 2012 - 2017 team that played in four All-Irelands finals and lost two other semi-finals in replays made the team. With the crossovers of Alan Dillon, David Clarke and Andy Moran, there is also six members of the 2004/2006 teams, while the team who played in two All-Ireland finals in 1996 and 1997 are represented by five players.

The voting was as deep as we've had in the 15 for 30 series so far, with stalwarts like TJ Kilgallon,, Noel Durkin, Peadar Gardiner, Pat Fallon, John Casey and Ronan McGarrity not making the top 30 despite a good number of votes.

Most shocking of all was the tally of just two votes received for Jimmy Sloyan, despite him playing above in Croke Park and answering aggression by hitting 1-4. Of course, you'd have to wonder if the politics of Mayo football are at play there. They'd make you sick.

There's a week off next week for the 15 for 30 series, but we'll be back to hurling in early July with the Banner County. Clare's last 30 years have eclipsed all in their history, with the breakthrough of the 90s front and centre in everyone's mind. You add to that the All-Ireland and League success of Davy Fitzgerald in the early 2010s, and some great hurlers along the way who may not have been around at the right time and there's plenty of debate to be had.