The Undervalued Man Who Can Tip The Balance In Mayo's Favour

It was with a mix of wonder and dismay that one looked down on the field at Croke Park last August and watched Lee Keegan stand alongside Con O'Callaghan on the edge of the square, one on one with twenty metres of open space in front of him.

It was the quintessential tale of the matador and the bull. Transfixing action despite the fact that one slip would inevitably produce carnage. That day, Keegan and Mayo did indeed slip.

In an era where standard practice is to flood players behind the ball and reinforce the defence with extra numbers, Mayo's throwback to an ancient mode felt borderline bold but ultimately bonkers. Marc Ó Sé and Kieran Fitzgerald may have expected to fend for themselves in wide-open space but the modern defender generally faces a different challenge. 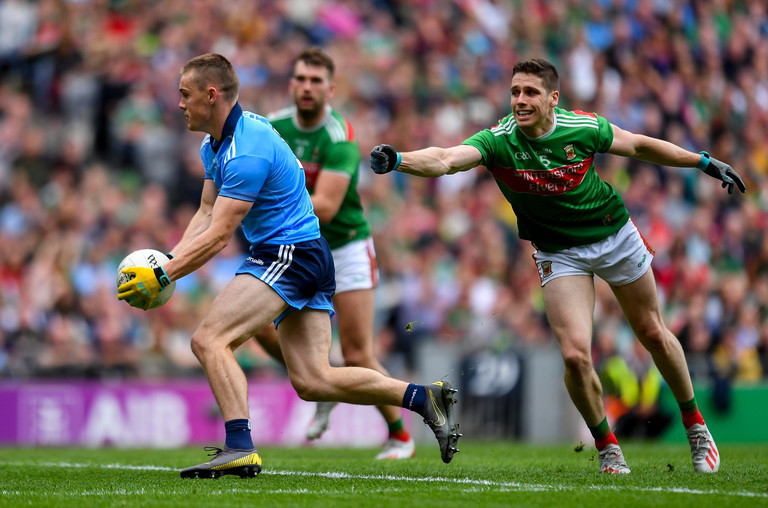 Not in Mayo. Alongside Dublin, they remain one of the few elite teams who have maintained a consistent adherence to a progressive model. A high-octane half-back line are given licence to get forward whenever possible.

Like Dublin and Cian O'Sullivan, often only one player will hold the centre. In recent years Colm Boyle has undertaken this role. At times, he too can tear forward and expose the back. Attacking from deep is not so much a choice but a necessity.

This strategy has been a successful one. Since 2012 when James Horan first took charge of the county, they have reached four of the last eight All-Ireland finals. That is the pay-off, yet there is a cost.

In the circus that is Mayo's sorrowful search for Sam Maguire, their full-back line protrudes as the high-wire act.

Nothing captures where this outfit is currently more than numbers 2, 3 and 4. Oisín Mullin is a necessary injection of youthful dynamism, Chris Barrett and Lee Keegan are the stalwarts that have sustained one of the sport's great teams. 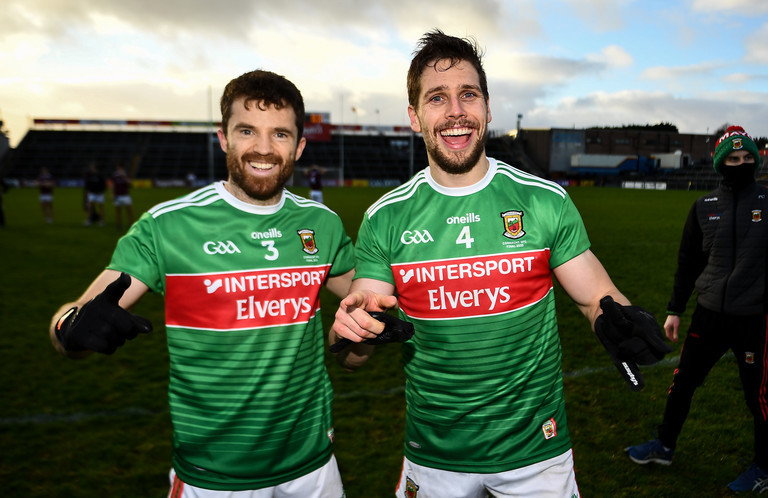 Since captaining Mayo to a U21 Connacht title, Barrett has amassed 46 senior championship appearances in green and red. The defender has one All-Star to show for it. Yet his importance in this team cannot be understated. Consider this: over the past four years, Mayo have played 1, 860 minutes of championship football. Barrett has featured in 1,652 of them.

Having missed Mayo's league campaign through injury, he returned to the team against Roscommon and locked down Conor Cox. The 34-year old's defensive role is still vital. He demonstrated as much against Galway.

Mayo's elder statesmen are skilled one-on-one defenders thanks to six years of exposure to Donie Buckley's defensive coaching. Their players have routinely pointed to the Kerryman as a key cog in perfecting this art.

"He brings a whole game intelligence on how the game is played and how it should be played, that whole aspect. He's a great philosophy on how we should play football and I love the way he thinks," Lee Keegan told Balls.ie in 2018.

"For me, as a defender, he really works on our footwork and technique of tackle. Especially in the likes of Croke Park, that can influence a defence. Being able to stand your man up one-on-one in a lot of space is something that we hugely pride ourselves on."

Barrett was tasked with marking Galway forward Dessie Connelly in the Connacht final. Time and again, he won his duel with a well-timed interception or inch-perfect tackle.

Early in the first half, Shane Walsh wins the ball on the 45 and immediately looks to kick into the space in front of Connelly. He knows he can do so as Mayo are unlikely to have a sweeper positioned there. 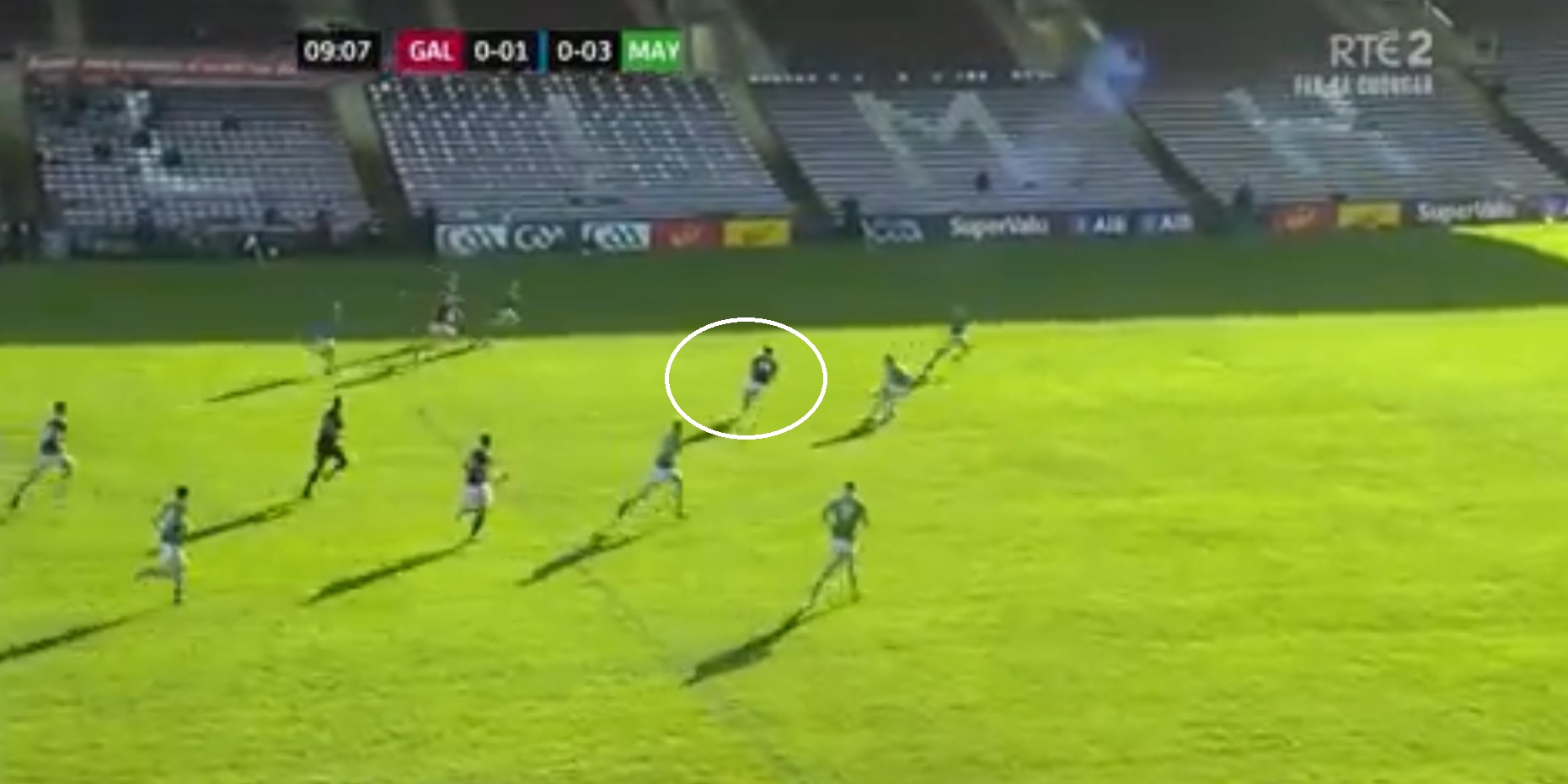 Barrett has no support but is marking Connelly from the front and gets to the ball first.

He has an outstanding ability to tackle the ball accurately.

A Galway attack in the first half looks promising as Connelly wins the ball and lays it off to an oncoming Sean Kelly (white). 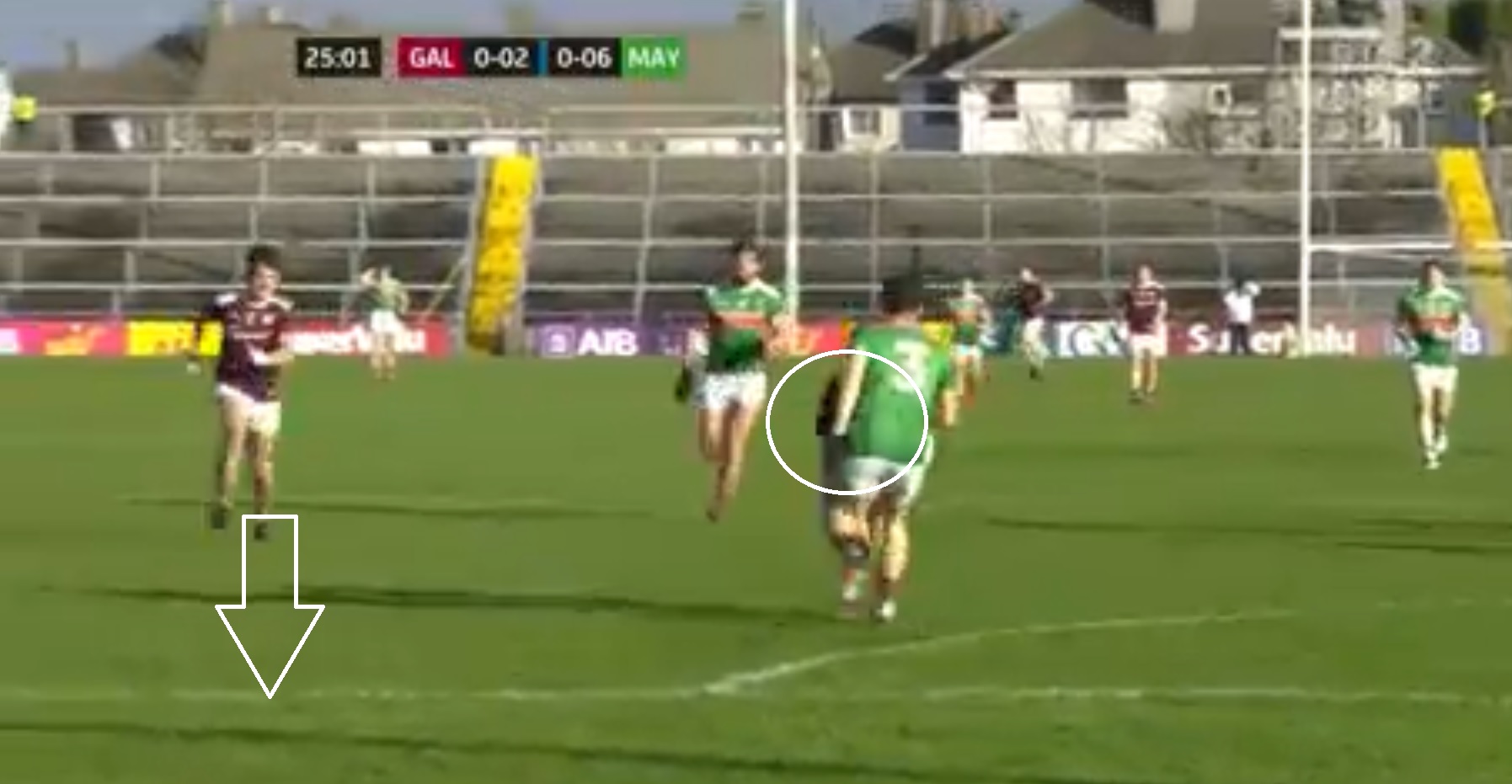 Kelly is racing in on goal, but Barrett times his tackle perfectly and the ball breaks. 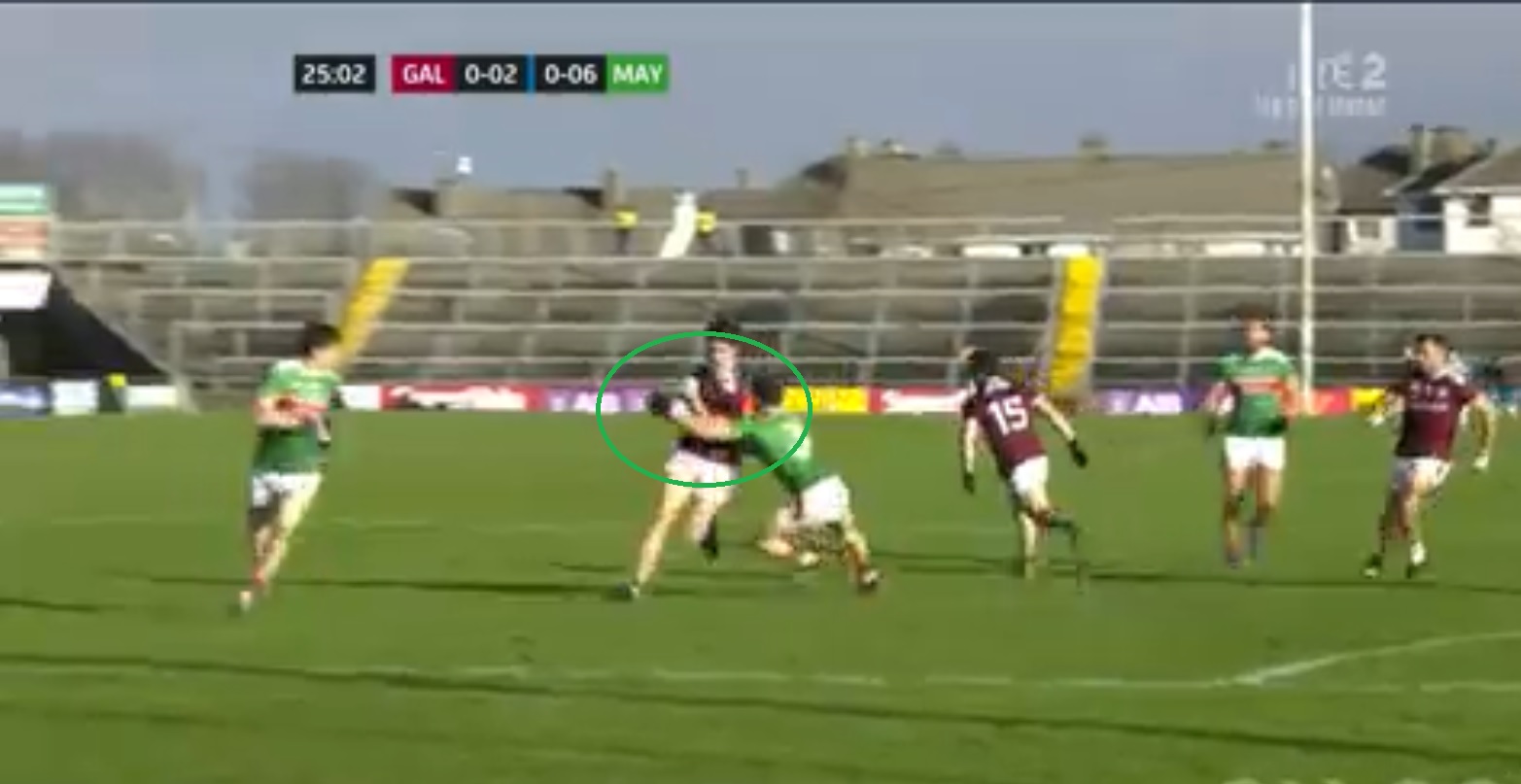 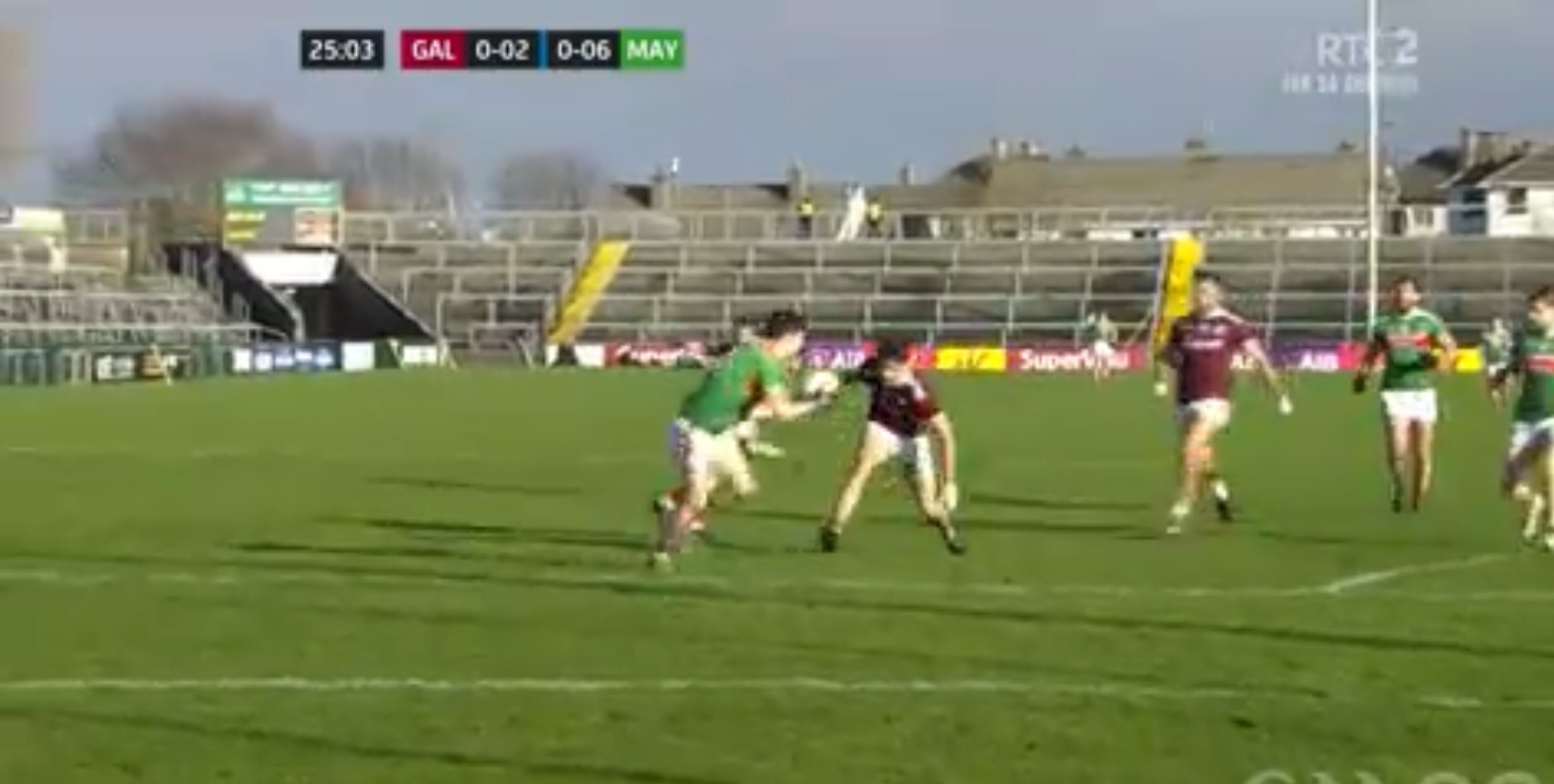 Galway played with bodies behind the ball, with two forwards holding their position up the field. Repeatedly, it was Barrett who frustrated their gameplan.

Midway through the first half, Galway kick long to their inside forward.

This time, centre back Stephen Coen holds his position so Barrett can mark from the back. He reads the pass and gets to the ball before Connelly. 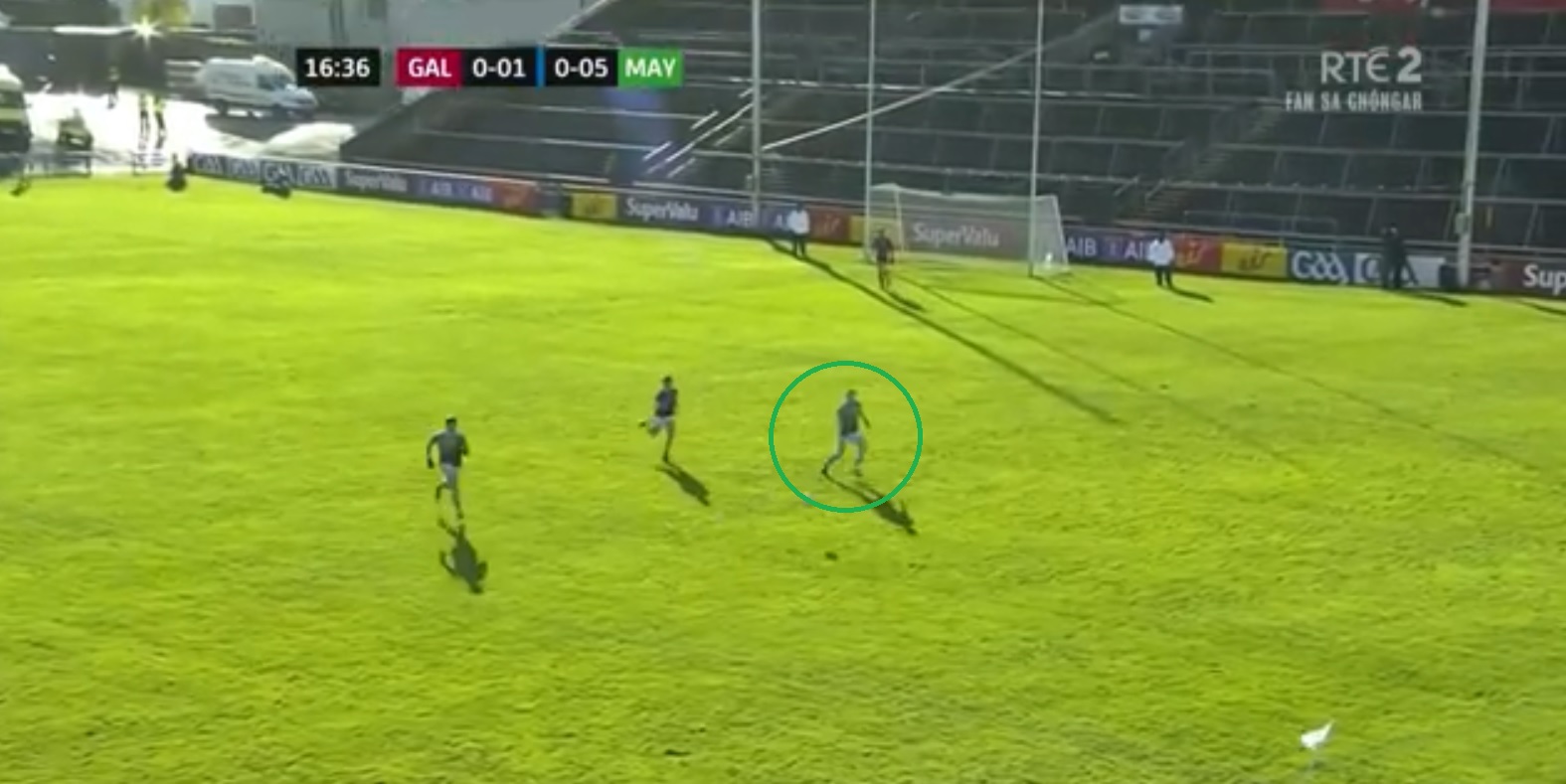 Barrett is touch-tight and gets a hand in to disrupt the ball.

The ball breaks and Barrett wins it. He is then fouled. Mayo have a freekick and a chance to launch an attack.

Just before half time, the ball is once more kicked in long. 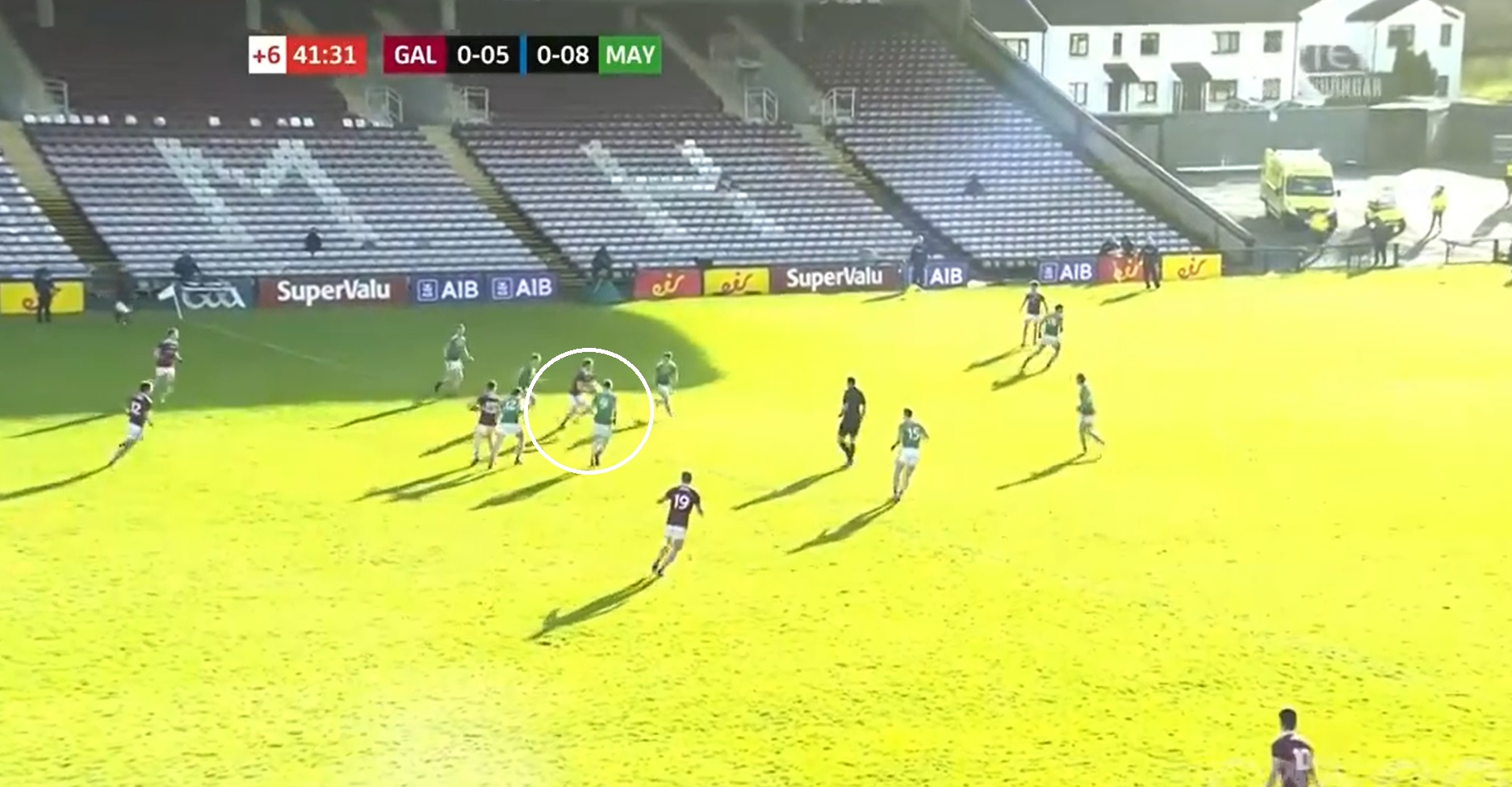 Barrett gets a hand in. 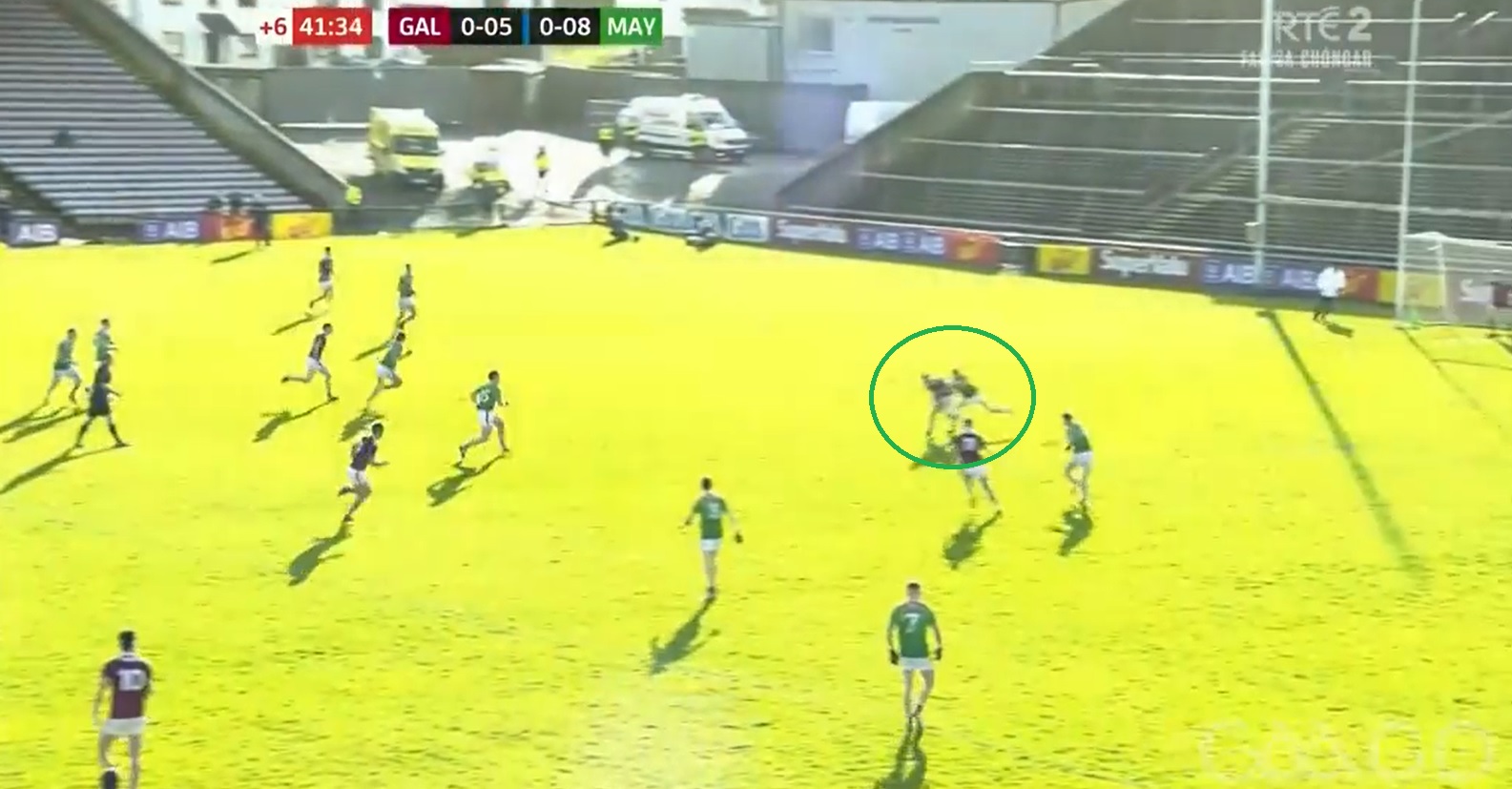 In total, the full-back finished with three interceptions, three tackles that resulted in turnovers and caught one David Clarke kick-out. He only committed two fouls.

His skill set is not the sort that attracts huge praise. However, when analysing Mayo it is striking just how often he does the decisive defensive work well. With remarkable consistency, he gets the decision to stay with his man or cover the space correct. Oppositions try to deliver the ball to their inside line and Barrett will be there fastened to their forward, cutting off that option.

It is this solidity that gives Mayo's abundance of gung-ho defenders the licence to get forward. Keegan and Oisin Mullin are well capable of doing just that.

The duo's scoring exploits are well established. Keegan has amassed 6–40 in 57 championship appearances. Mullin's goal in the U21 Connacht semi-final last year was a clear sign of his attacking ability. But neither have scored so far in the 2020 Championship.

That is because, in Horan's current system, their role is not finisher but facilitator. Tipperary will play in a similar vein to Galway, getting numbers behind the ball while leaving two inside forwards up the field. In order to orchestrate a score against this system, Keegan and Mullin need to attack.

This was evident in Salthill. Early in the game, Mayo try to work a score with a Diarmuid O'Connor free outside the 45.

Galway have numbers back so Mayo start to work the ball over and back, waiting for an opportunity. Both Keegan and Mullin (green) get forward and play the ball. 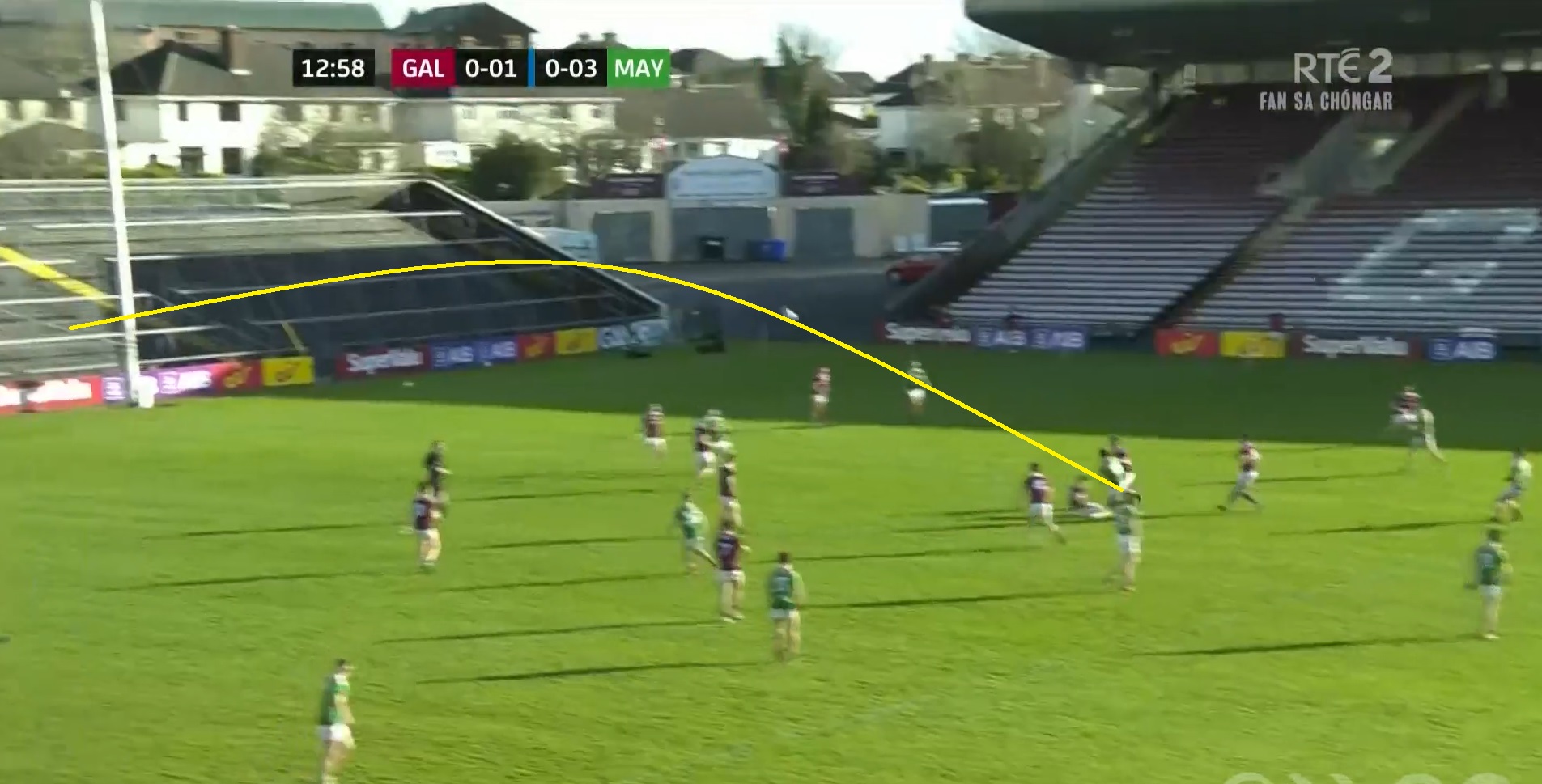 Of the 18 passes that came before that point, six were by Mayo defenders. The only defenders not directly involved in the play were Paddy Durcan, who is well able to attack, and Barrett. Keegan and Mullin know they can get forward because Barrett can match his man single-handedly. This is crucial in the context of this weekend's tie, Tipperary's system and the role of Conor Sweeney.

To return to the All-Ireland final, Mayo must find a balance between getting forward and not leaving themselves exposed at the back. Barrett tips it in their favour.

SEE ALSO: 'The Key To Dublin Is Beyond Cluxton Now': How The Kick-Out Is Evolving