McConville And Whelan Suggest Mayo Penalty Should Have Been Retaken

Ciaran Whelan and Oisín McConville both believe that there were grounds for Ryan O'Donoghue's missed penalty in the All-Ireland final between Mayo and Tyrone to be retaken.

Just over five minutes into the second half - with Mayo trailing by two points - referee Joe McQuillan awarded a penalty after Tyrone's Frank Burns picked the ball from the ground inside the small rectangle.

O'Donoghue's kick hit the post and went wide. However, before the kick was taken, Tyrone goalkeeper Niall Morgan had moved from his line, and both Peter Harte and Michael McKernan had stepped inside the 20m line.

"Interesting with the penalty, it could have been retaken," said former Dublin footballer Whelan on The Saturday Game.

"The penalty itself wasn't a very good penalty - Bruno Fernandes-like - you want to get power and get it on target. You wonder if it had been saved, would it have been retaken?"

Armagh All-Ireland winner Oisín McConville thought that McQuillan appeared to have a word with Morgan about staying on his line before the penalty was taken.

"[The linesman] David Gough is looking at the two boys running in ahead of him. Peter Harte was so far ahead of him, he could have taken the penalty himself! There were definitely a couple of reasons why that should have been retaken."

The penalty being missed was a major blow to Mayo's hopes.

"The key thing is the momentum shift," added Whelan.

"If that goes in, Mayo feed off that energy, and it would have been a significant turning point. They never a moment in the game to revitalise the crowd. It was 0-10 to 0-8 at that point, that would have been a gamechanger for them." 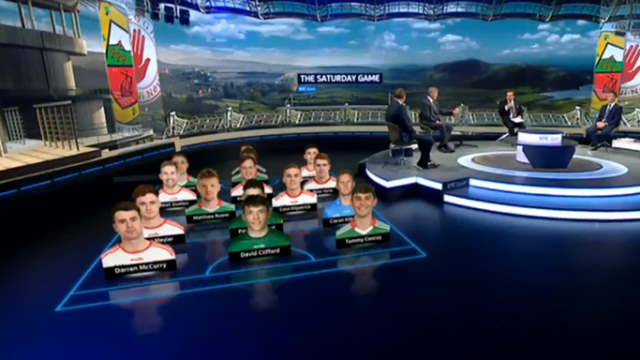 GAA
4 months ago
By PJ Browne
'I've Had A Weird Feeling For Mayo All Year. I Like The Look Of Them'
GAA
4 months ago
By PJ Browne
'In ‘16, He Was A Really Important Player. He Was Out Of Favour Since'
Popular on Balls
Rugby
2 days ago
By Colman Stanley
Keith Earls Shares Story That Captures Andy Farrell's Decency
Football
1 day ago
By PJ Browne
'If He Continues With Performances And Goals Like That, Stephen Kenny Will See It'
Football
2 days ago
By Eoin Harrington
Quiz: Name Every Player To Score In A Champions League Final
Football
19 hours ago
By Gary Connaughton
Portsmouth Likely To Retain Gavin Bazunu This Month Despite Championship Interest