It was a war of words that left feelings hurt on both sides. Sean Cavanagh was not long in the punditry chair when he passed judgement on Tyrone's attacking structure, or lack thereof. His comments were not well received.

"The way Tyrone has played this past three or four years, we haven't played with any structure in the forward unit," Cavanagh said before the 2018 Ulster Championship.

Ronan O’Neill, Darren McCurry, Kyle Coney, who came through way back in 2009, 2010, Niall McKenna, there’s been a flood of guys who probably have suffered because we haven’t played with six attackers.

Some of those guys I would have called marquee, and thought they would be marquee, but because they never had that room to breathe and some of them couldn’t cope with having to spend more time on the bench, because we were going towards a certain type of player, they struggled.

What was once only whispered on terraces became a nationwide discussion. His former teammate and then Tyrone selector Gavin Devlin jumped to Mickey Harte's defence, claiming a "great captain" would have aired their grievances while still playing and not from the comfort of a studio. Cavanagh later labelled that a "cheap shot."

In a football county brimming with passion and pride, such quarrels are not particularly unusual but nor are they welcome. Ultimately, both parties were driven purely by a desire to see the team succeed. How do you best bake the cake? They couldn't even agree on the ingredients.

A season later, the wheel started to turn. Cathal McShane was unleashed at 14 and spearheaded the development. They found a path forward.

Last weekend, Tyrone emerged for their first championship encounter post-Harte with a slightly different flavour. One of the players Cavanagh pointed to, Darren McCurry, thrived.

The Edendork club man was awarded man of the match after hitting 0-10 against Cavan in Healy Park. That included 0-5 from play, one mark and 0-4 from frees. 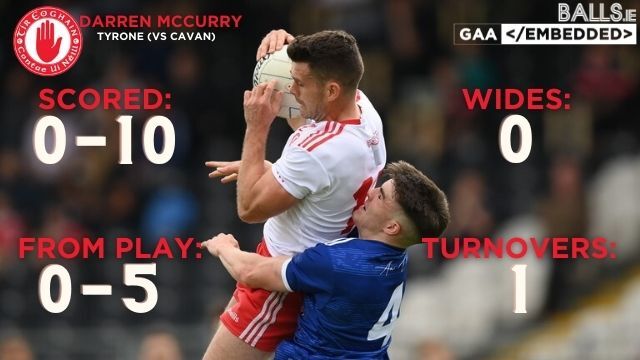 Feargal Logan and Brian Dooher struggled to find the necessary balance between a strong defence and an efficient attack during the league. The structure last Sunday saw them strive to leave two players up the field even when they do not have possession. 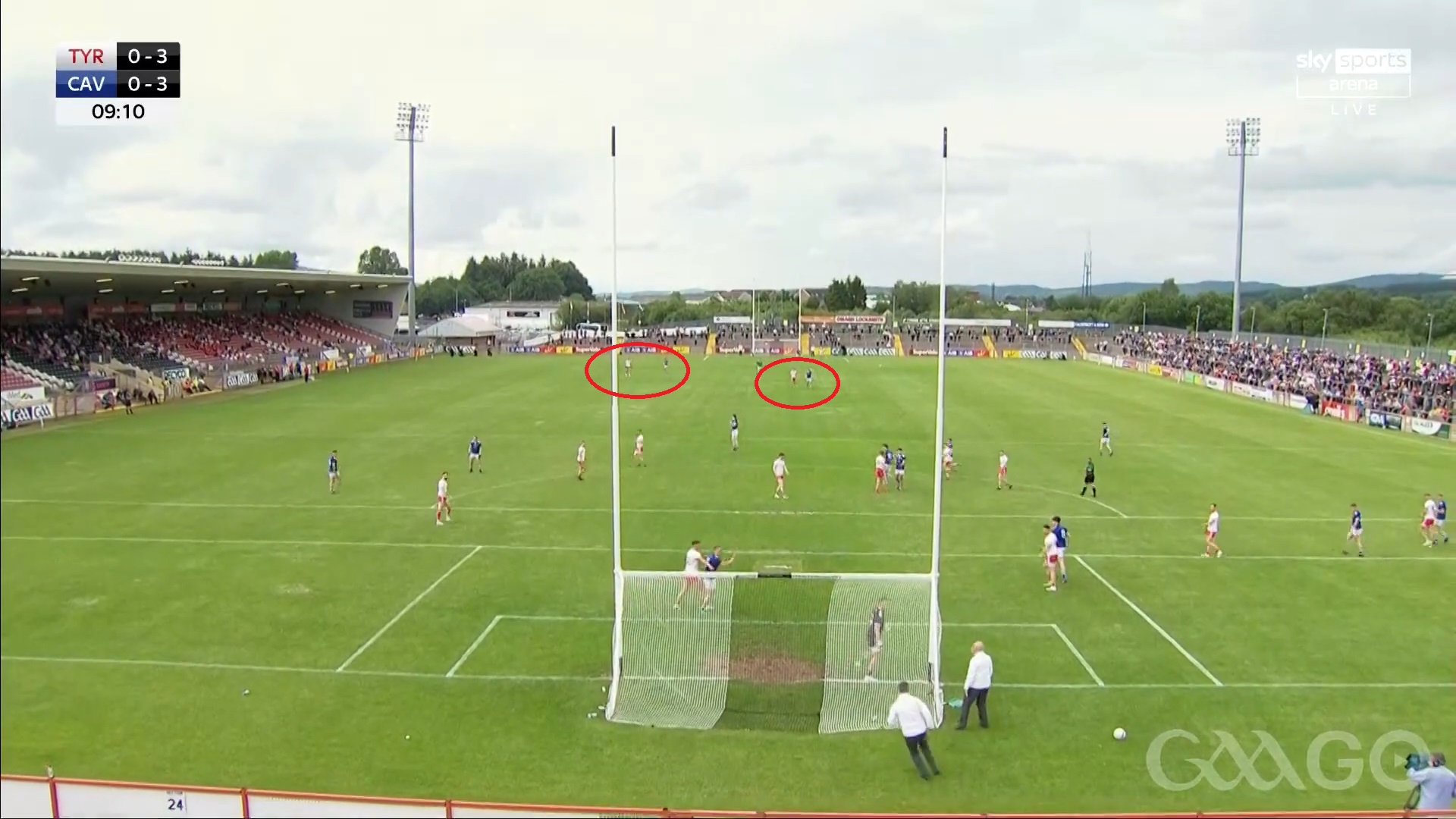 That is not to say those forwards only play when Tyrone have the ball. McCurry still has clear defensive duties. An issue during the league was the lack of a press up the field. The 28-year old brought pressure in the opposition half.

However, it is clear this was only expected to a certain point. As soon as the ball progressed up the field, McCurry would return to his position regardless of whether they had retrieved the ball.

McCurry works back in Cavan's half.

As soon as the ball crosses the halfway line, he turns and runs back up the field to give Tyrone an option from any potential turnover. 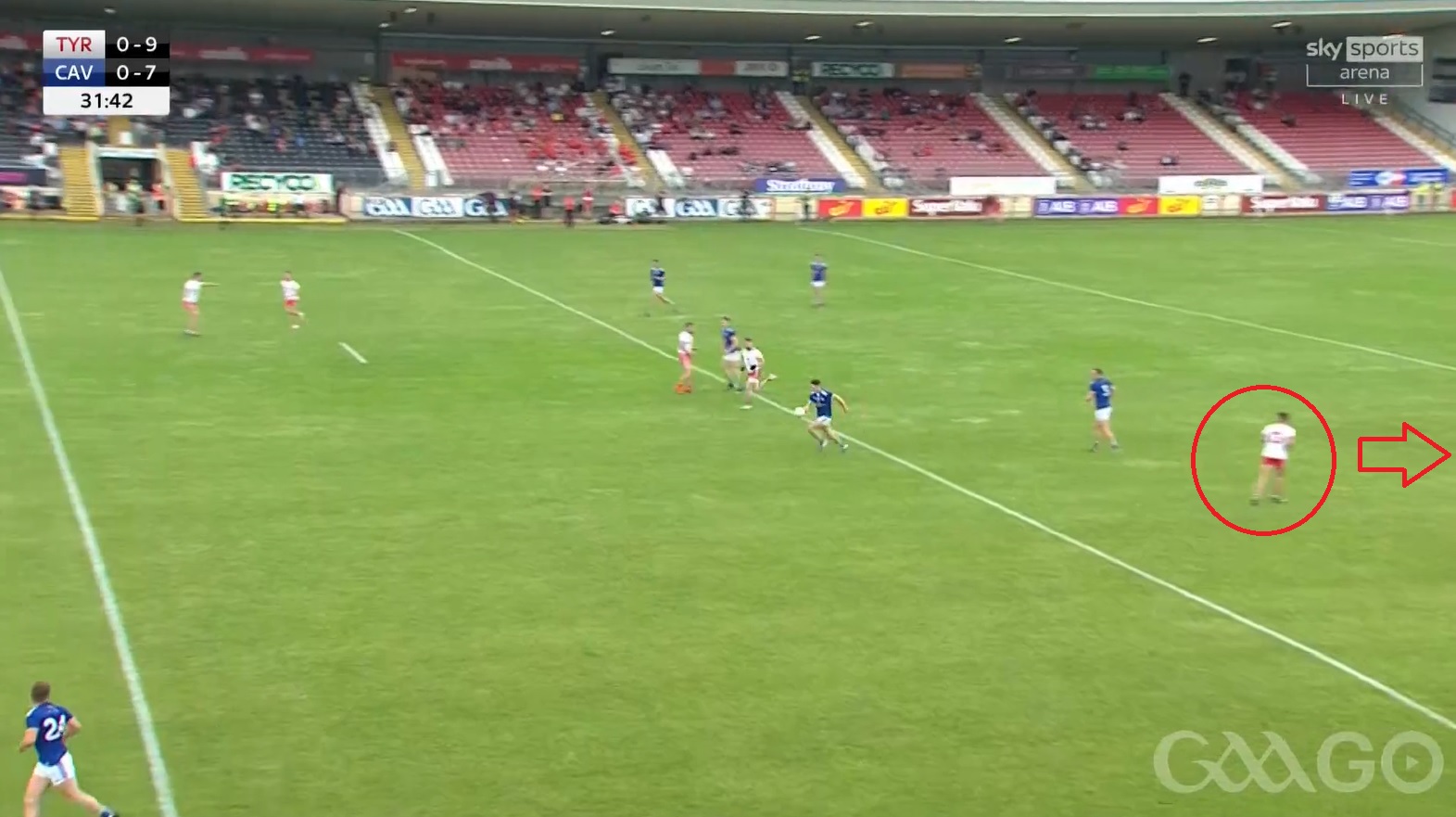 In the second half, he helped created a turnover up the field thanks to this work rate. 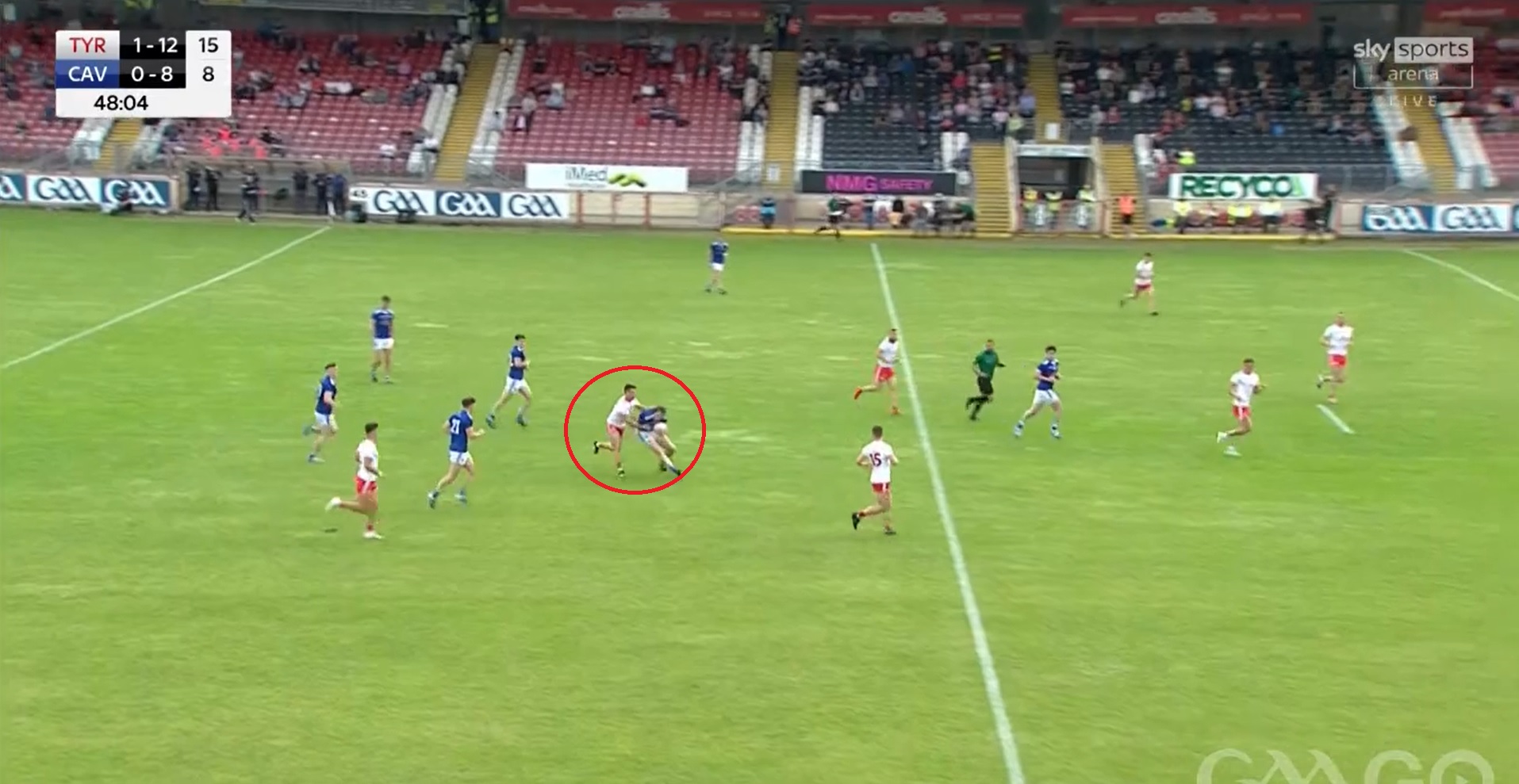 By remaining upfield when Tyrone don't have the ball, McCurry is a constant option when they win it back.

All of his scores from play and set-pieces came from inside the '45. 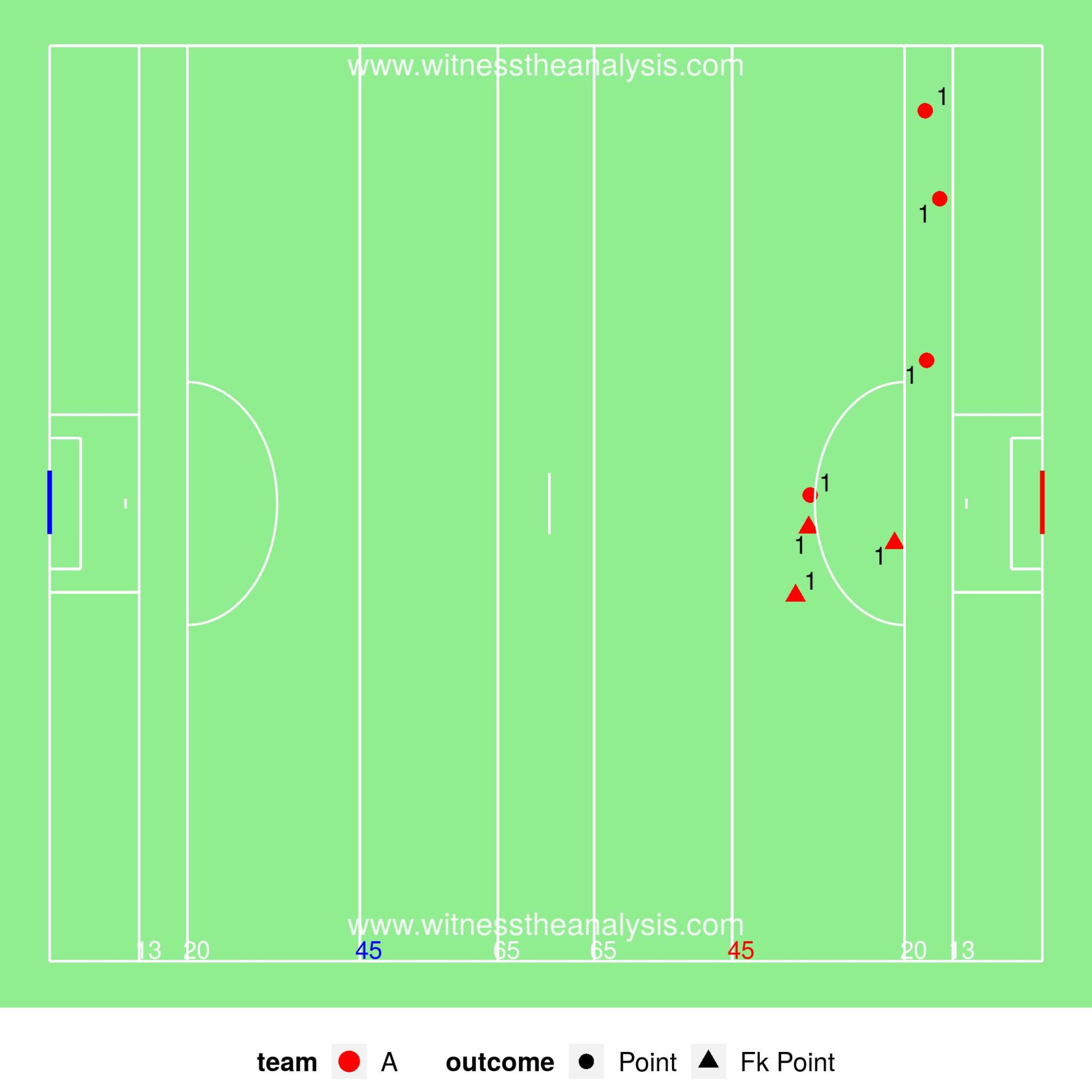 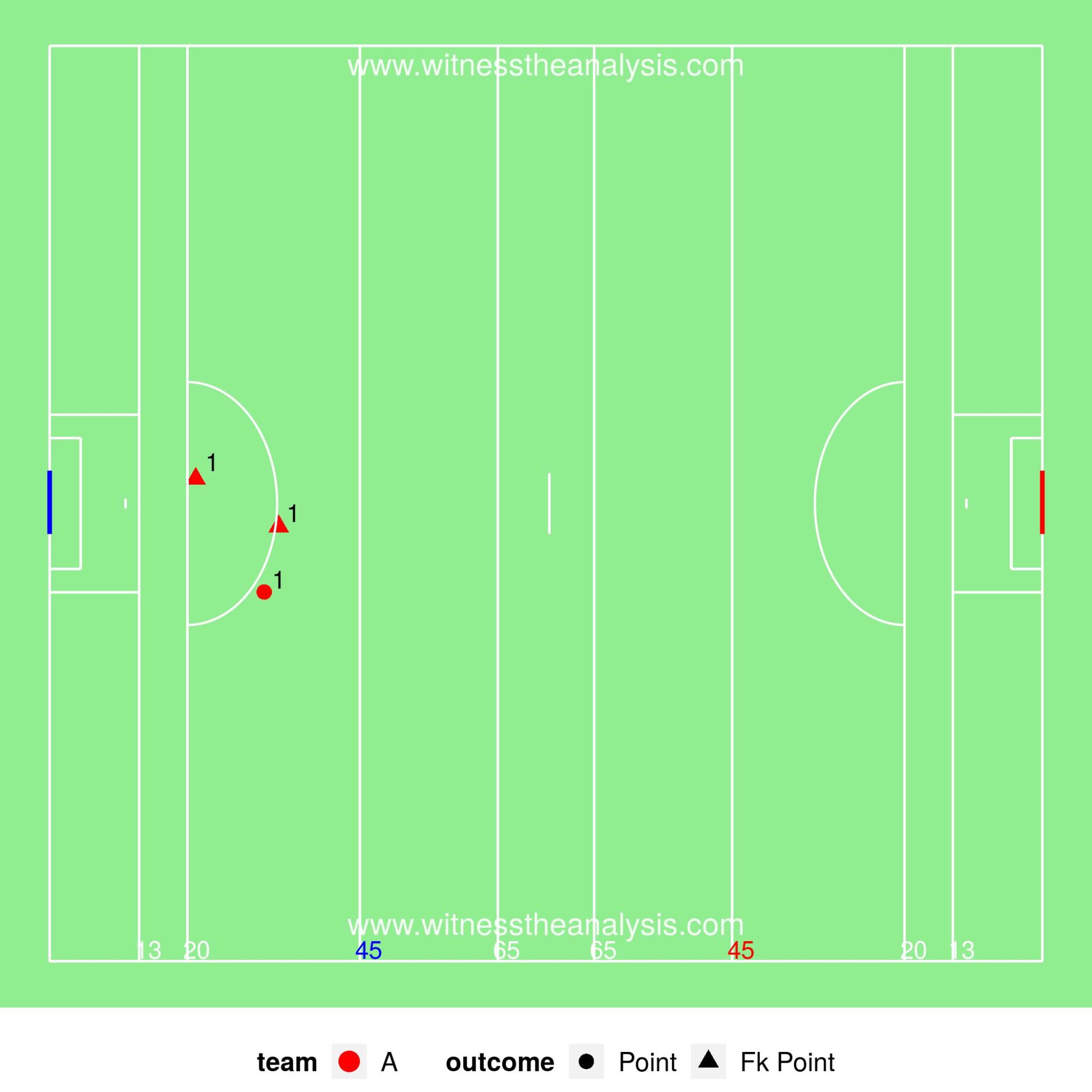 Tyrone's approach is reliant on creating space and good delivery. It is something they have drilled repeatedly in the build up, as McCurry explained post-match.

"I think our kick-passing was up to scratch and we created a lot of chances and there was a lot of movement,” he said. “Definitely, we’ve been working hard on that in training."

It was further enforced during the match.

As soon as Tyrone turned the ball over, they would look up for a kick-pass option. 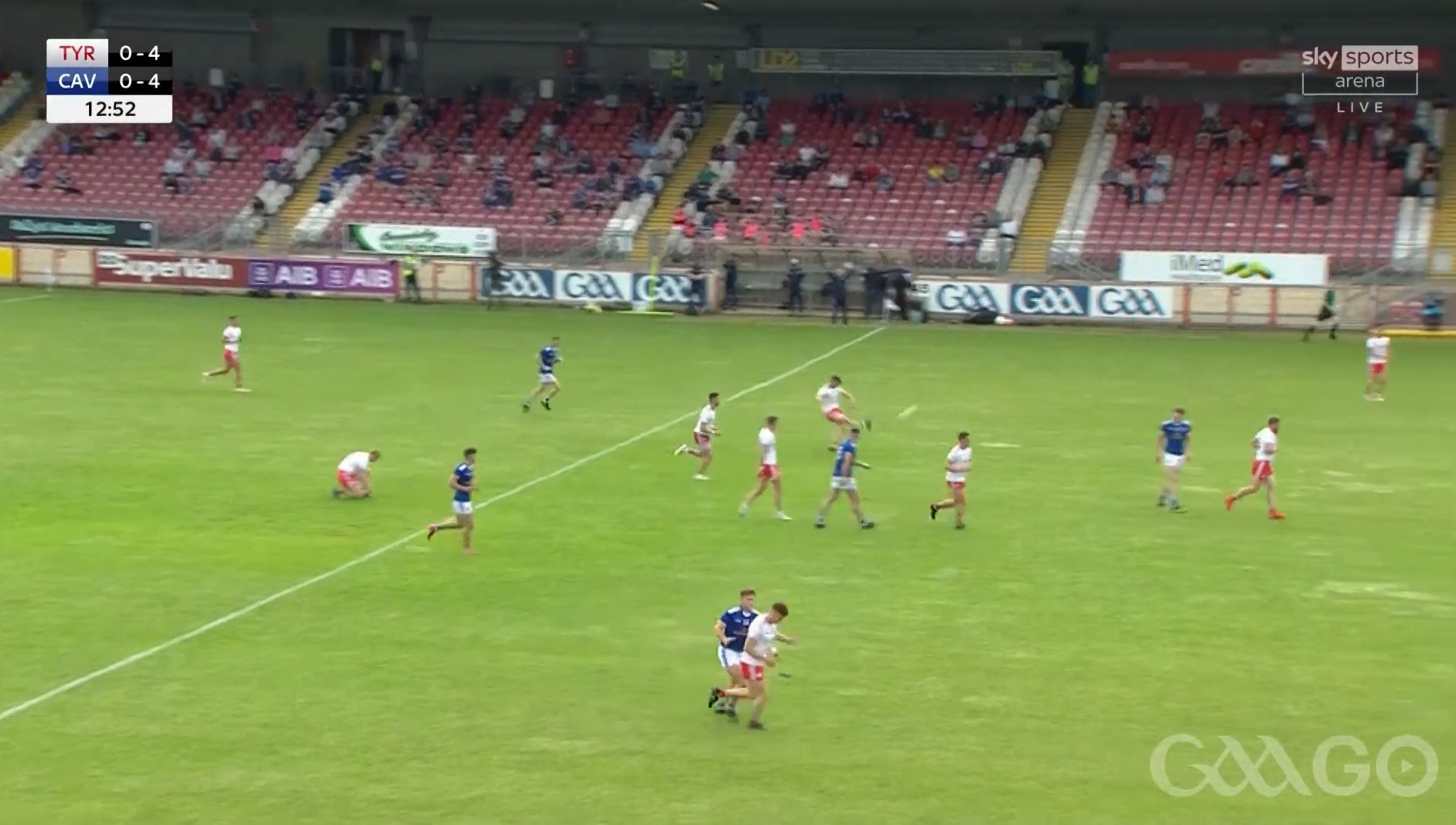 On this occasion, the bounce does not favour Mattie Donnelly. 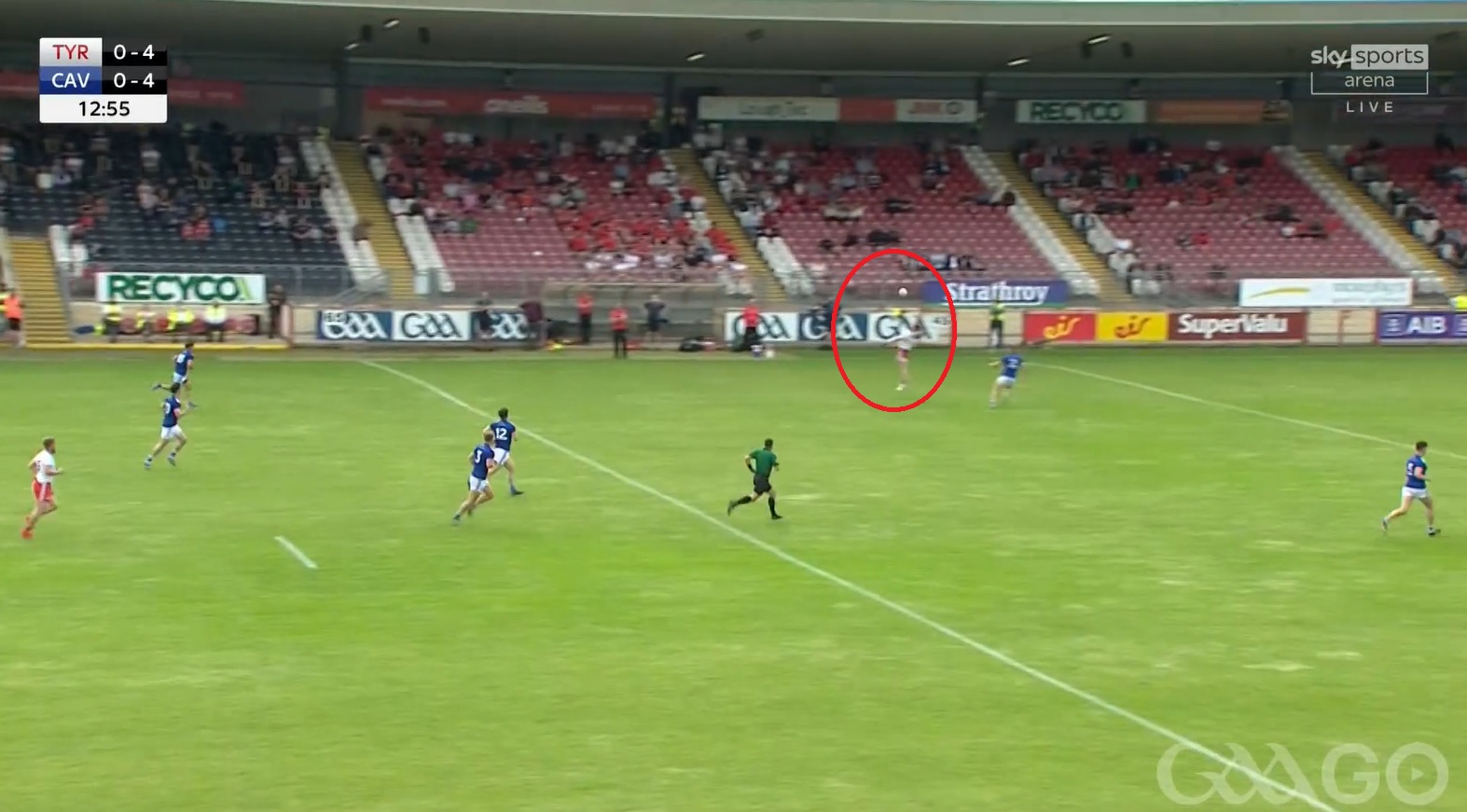 Donnelly ends up conceding a free. Immediately, he turns and stresses the need for the right kind of ball, low and out in front. 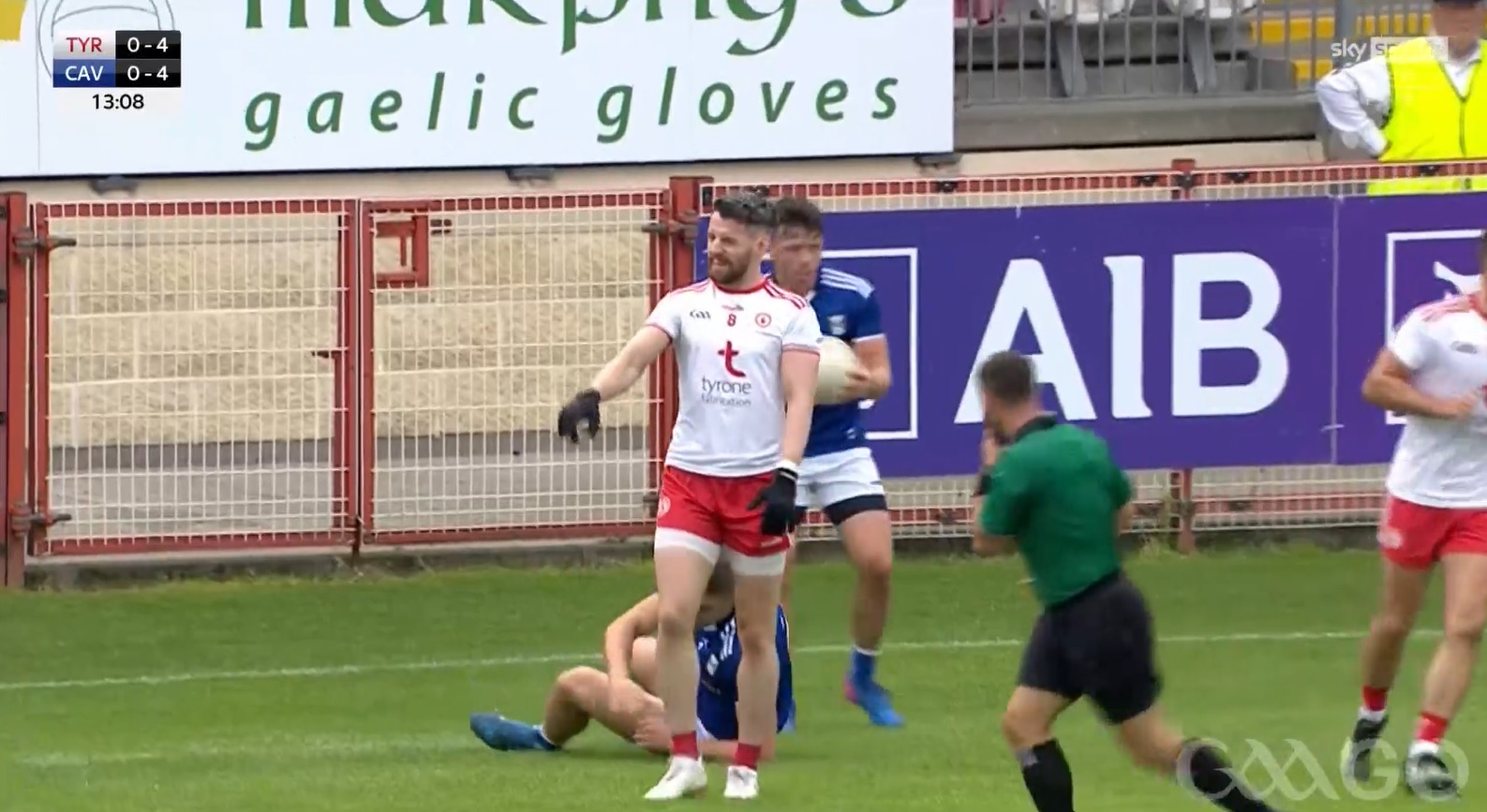 Tyrone are leaving space at the top of the D really well. They are playing good quality ball at the right moment. He (McCurry) is picking his moment, you still have to catch it and do the other part.

Definitely, tactically, they know what they want to do in attack.

Mickey Graham's outfit looked a side set up to counter a running game. The theory was simple. Man-markers would tag the inside forwards while Cavan would clog the middle third. Defenders retreat as the ball moves up the field.

Even if the ball is delivered long, all the full-back line need to do is break it and the retreating players can sweep up. This approach does not work if McCurry can gather clean ball first time.

Repeatidly, McCurry had space in front to break into. The kick-pass ensured Cavan's retreating defenders could not get back in time. 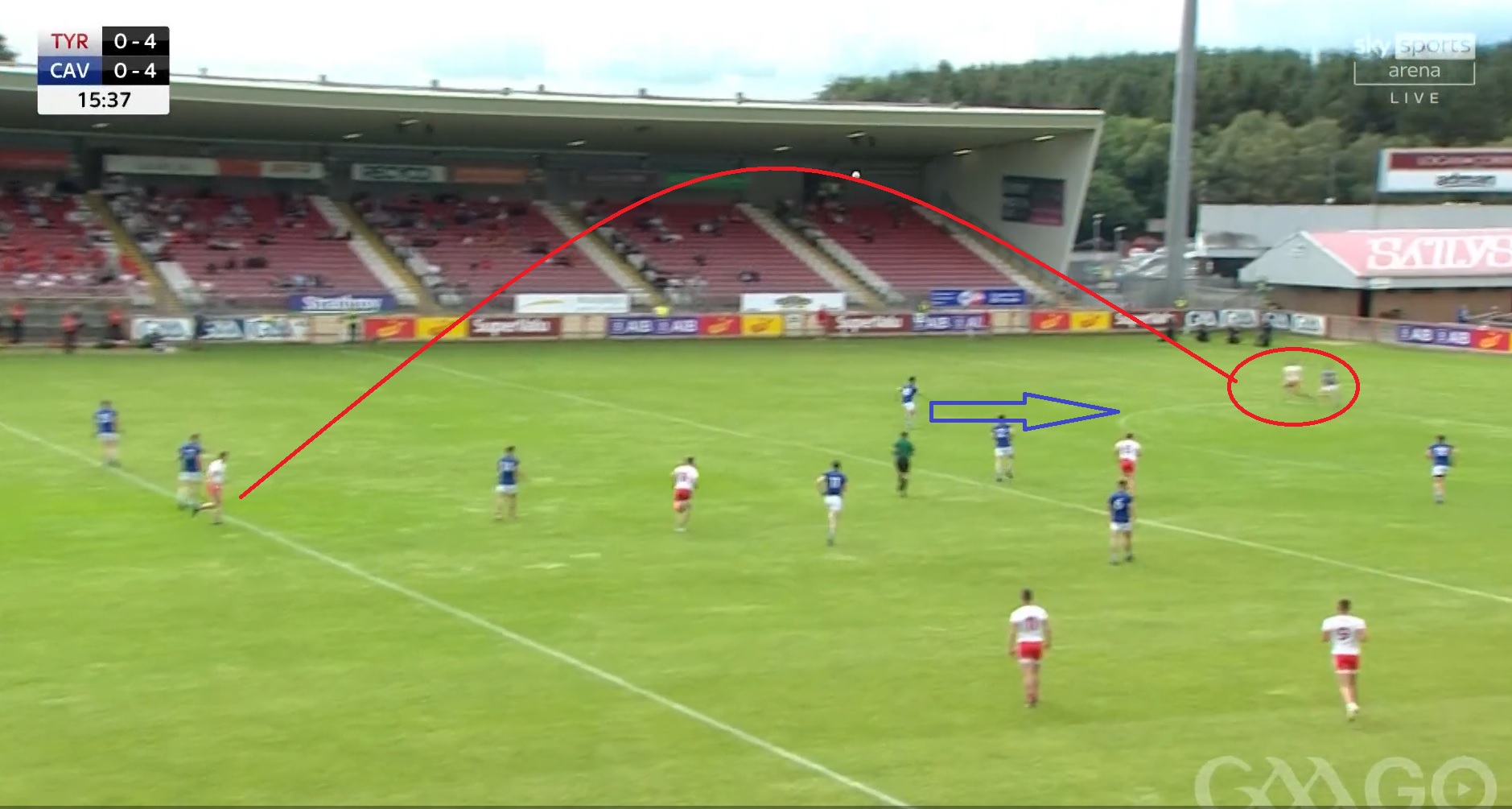 Note the space in front of McCurry for each score. He claimed one mark. He could have had several but played on. 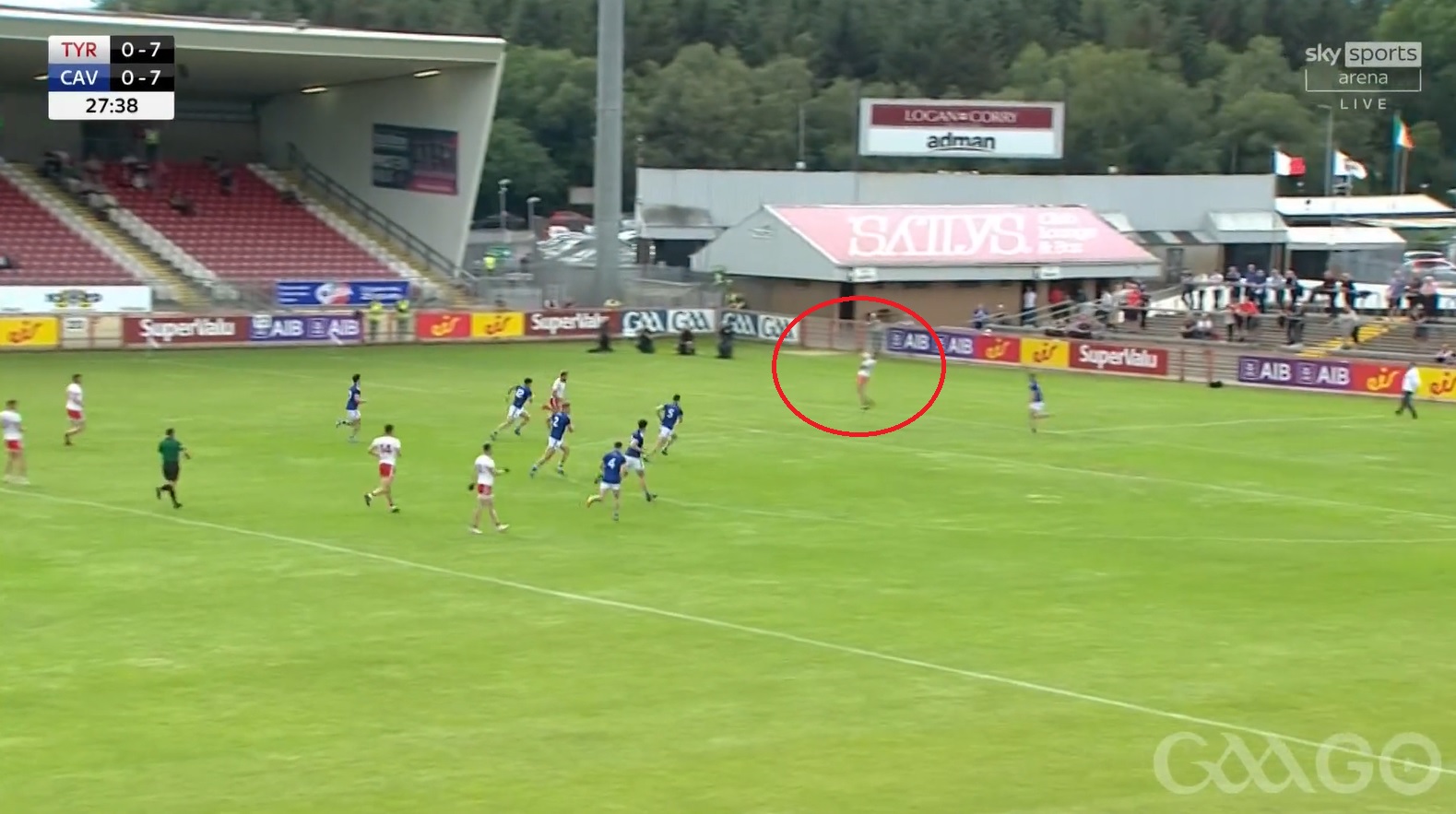 This is crucial in the context of what Tyrone do next. Much of their success was because of Cavan's failings. They failed to adapt and structurally malfunctioned as the game went on.

Even when they dropped a sweeper back, he was caught out of position and unproductive.

Midway through the first half, McCurry makes a run but does not get the pass. Neither defender is in front cutting out the option. 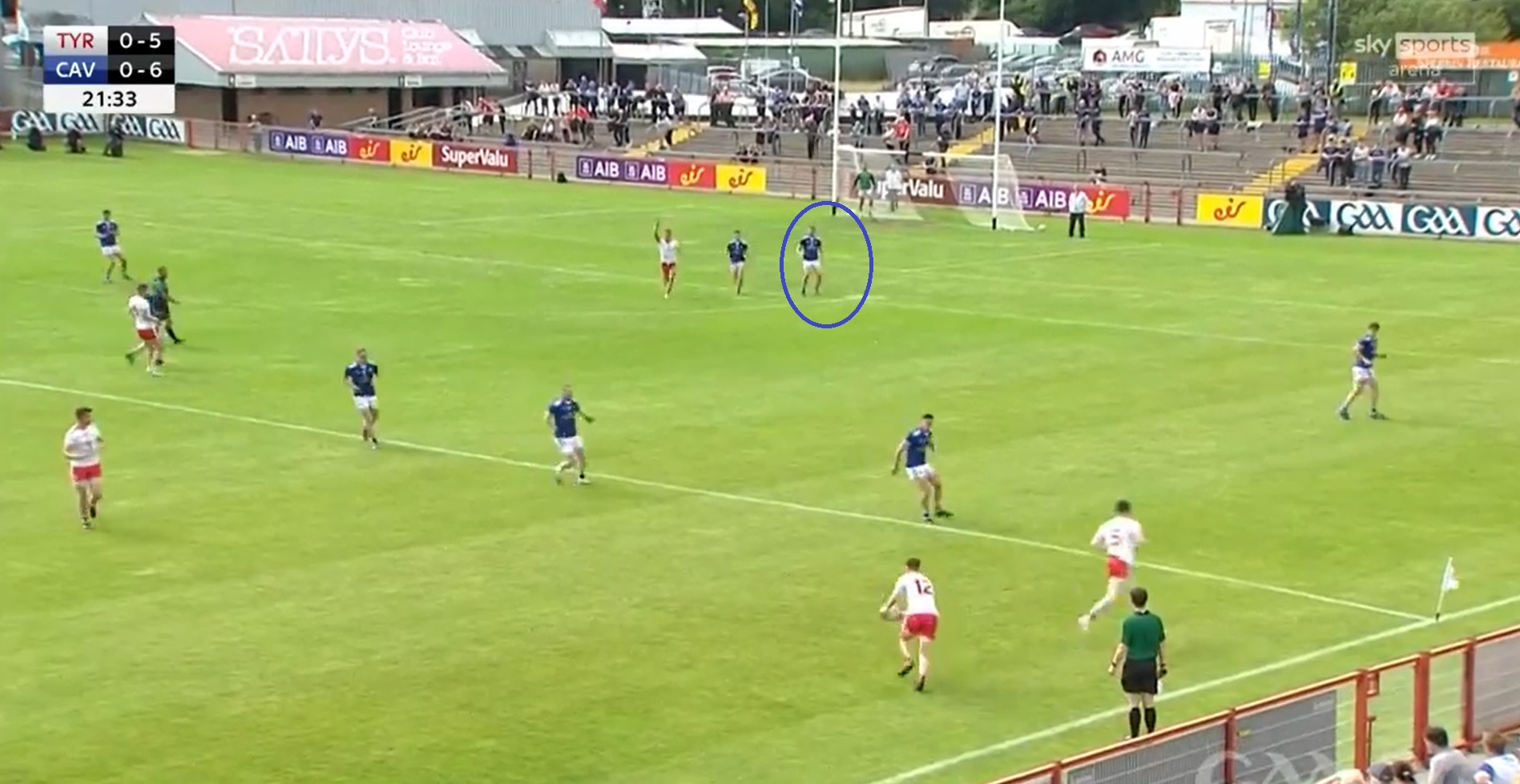 The inside forward keeps moving and eventually gets on the end of a superb pass. Cavan's sweeper is ball watching. It would be effective if Tyrone were trying to run the ball, but they kept recycling possession until the kick was on. 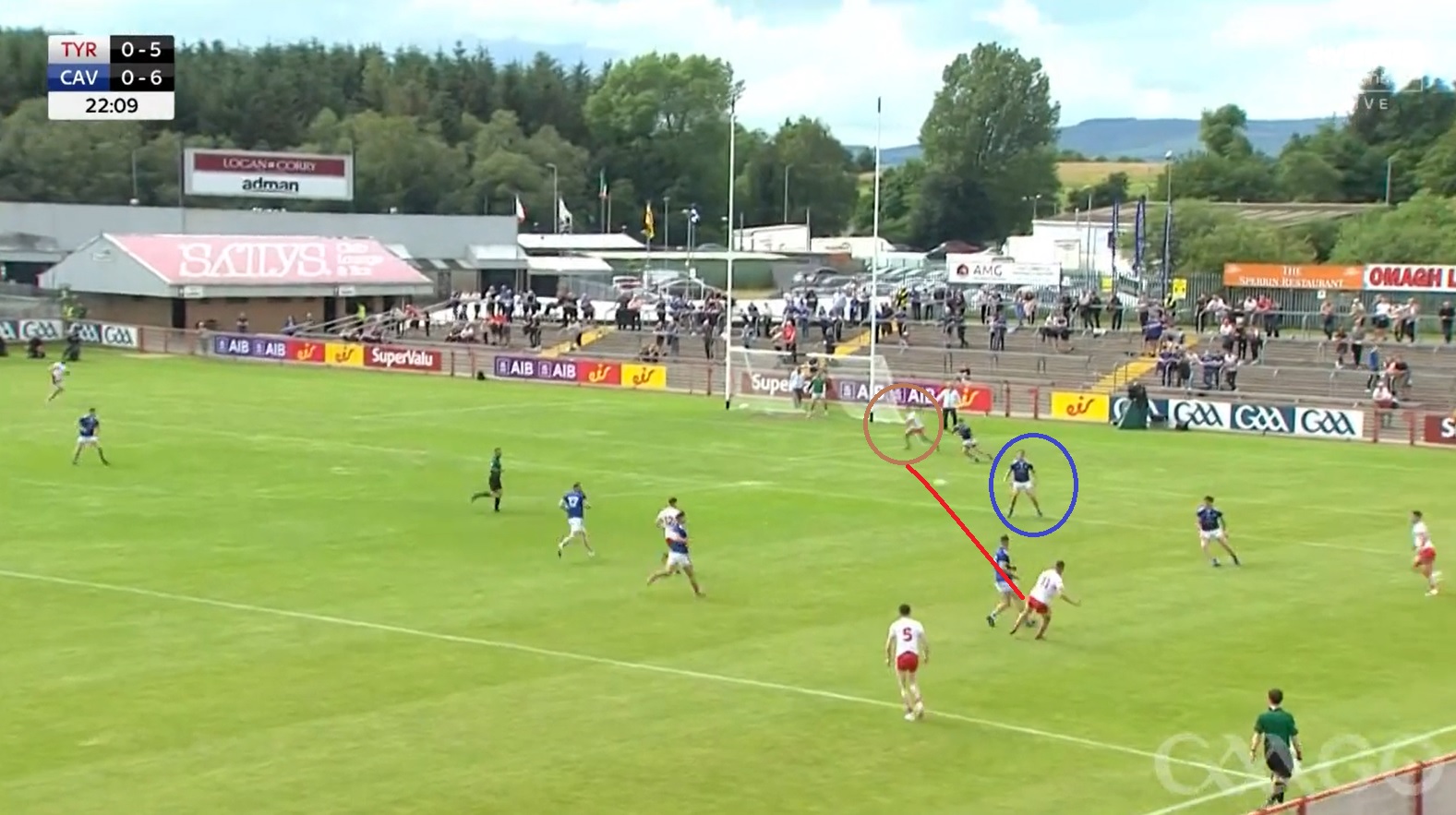 The Breffni county never adapted. In the second half, they continued to get bodies along the 45 while leaving space in front of Tyrone's full-forward line.

It is important to note this was a collective failure. Cian Reilly started on McCurry but was taken off in the first half. Luke Fortune came on and had little success. Eventually, Killian Clarke took over.

At times their chances were hampered because of the situation further out the field. A hugely mobile middle third, powered by Peter Harte, Conn Kilpatrick and Kieran McGeary, were not tracked.

Harte (red square) sprints up the field into space. His man lingers behind. 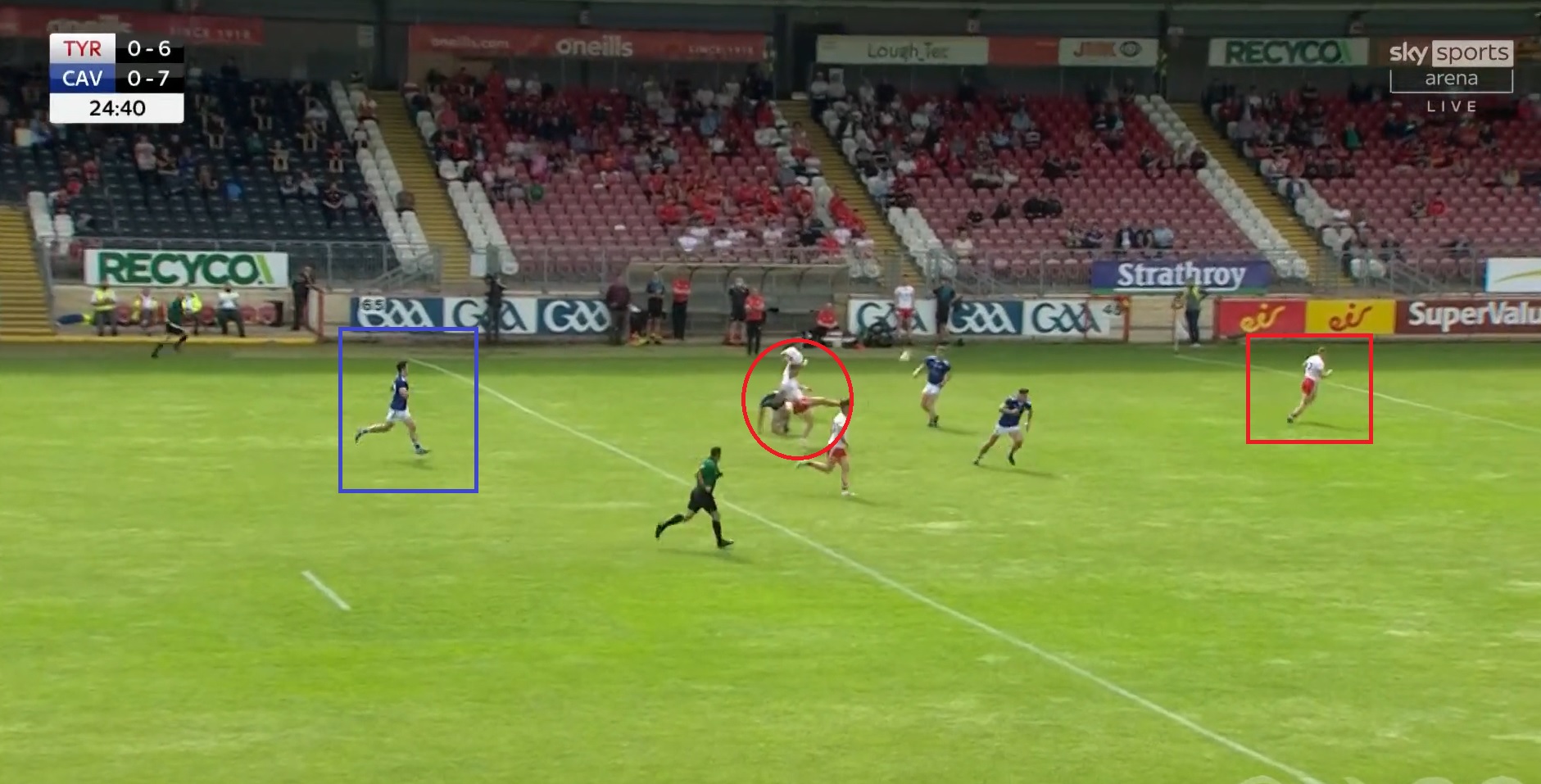 Harte drives on until a defender closes him down. He then passes off to McCurry. As a result, it looks like the forward has acres of space when in reality, the mistake came earlier in the play. 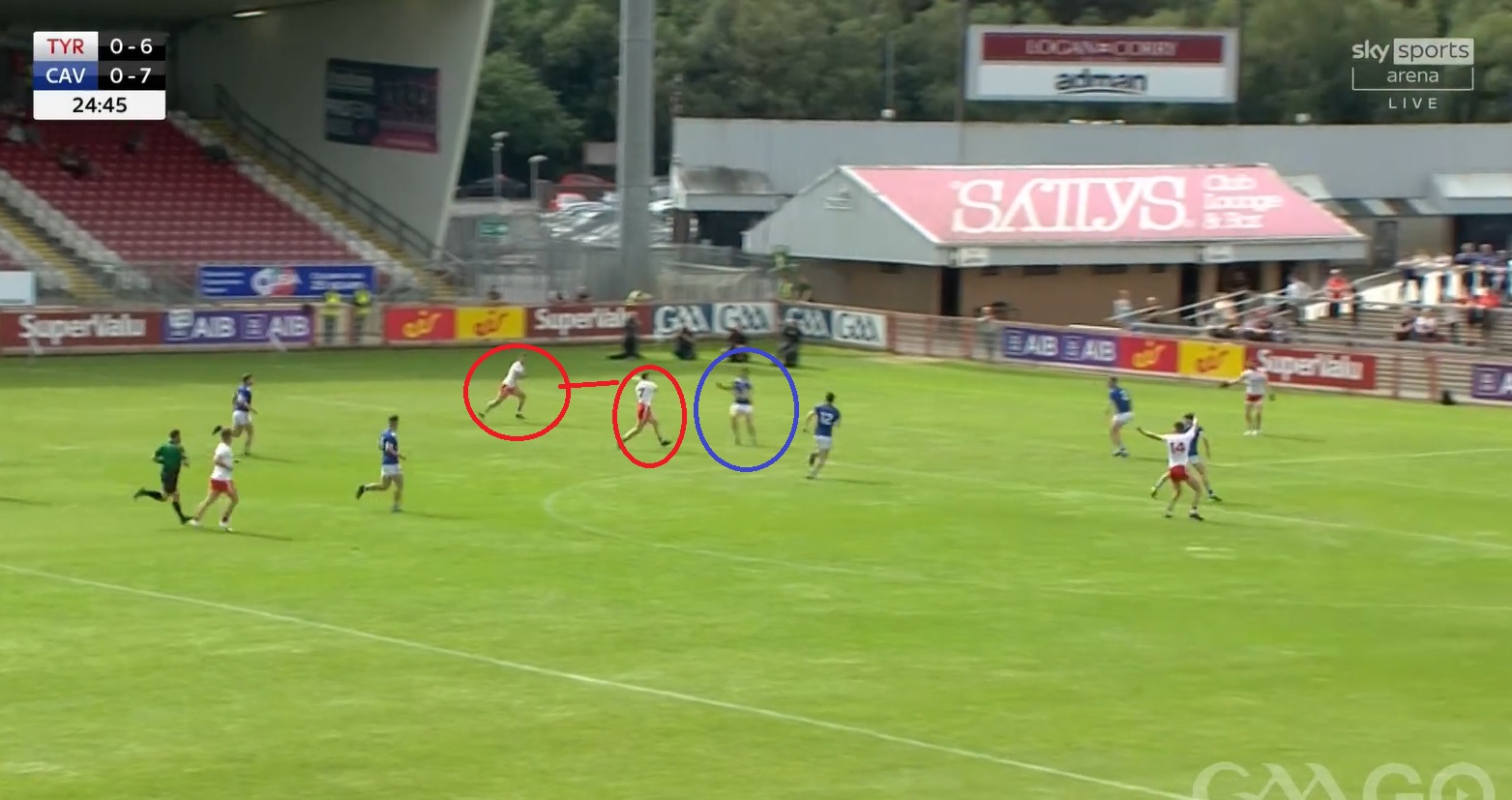 Now an Ulster semi-final against Donegal looms. Despite the positive result, questions remain. They need to try to fit in Cathal McShane, Darren McCurry, Conor McKenna and Paul Donnelly. If they all start, their roles cannot be the same.

Similarly, the likes of Neil McGee and Stephen McMenamin will not allow the inside line collect clean ball while Odhran McFadden-Ferry and Hugh McFadden will fill the space at the top of the D. An added layer of sophistication and adaption is a must.

Sean Cavanagh never called for drastic change. The desire was for an evolution rather than revolution. The destination is now apparent, their distance from it will be determined on Sunday.

SEE ALSO: There Are Gross Failings A Tiered Championship Will Not Fix 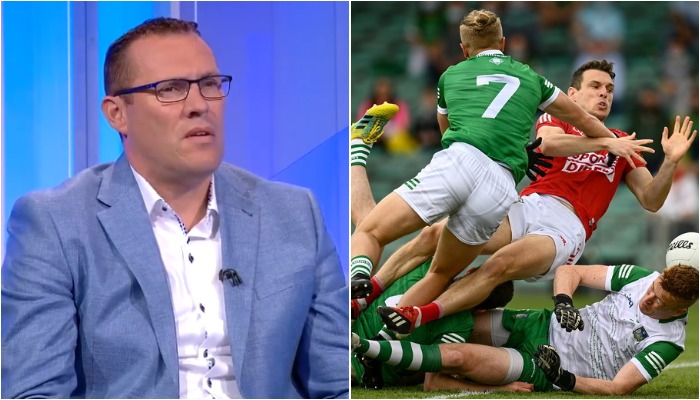