You probably won't get a more important duo for Galway camogie than the McGrath sisters.

Orlaith was a sharpshooter at the end when the Tribeswomen led by a single point. Her two points in stoppage time was enough to seal the deal.

In fact, Galway hadn't scored from play in roughly twenty minutes during the second-half until Siobhán's goal. Remarkable play from the two Sarsfields standouts.

After the match, Siobhán spoke to RTÉ about that the challenge that Cork faced. She said they did their homework on them after a few close encounters.

Siobhan McGrath hits the back of the net as Galway go back in front against Cork.

"We knew there was only a point in it either way," she said. "We played them in the league this year - it went to extra-time."

"So we knew coming out here it was just going to be right down to the wire and that's what it was today."

It was always a family affair in camogie for Siobhán, as she's the youngest of four sisters who all play for last year's All-Ireland Club Championship winners Sarsfields.

She spoke about being on the sidelines in 2013, when the Tribeswomen got the better of Kilkenny to win an All-Ireland.

"This what you dream of," she said. "Growing up in Galway like, you know, I suppose this is my first All-Ireland so it's so so sweet."

"You're there in 2013, watching your sisters. I was on the line doing water in 2013 and that really kind of put it into reality what it would be like to win it. It's a dream come true, I can't believe it."

It's come full circle for Siobhán and Orlaith having lost out to Kilkenny in the decider just nine months previous.

One thing that was evident even from watching at home was the crowd support. Something that was missing in December of last year.

"I think the crowd was unbelievable today, both sides. It was so so hard to hear anything. Players right beside you, you couldn't hear a word they were saying."

"It was unbelievable the turnout and jeesh, I've never played in front of such a loud crowd it was unreal." 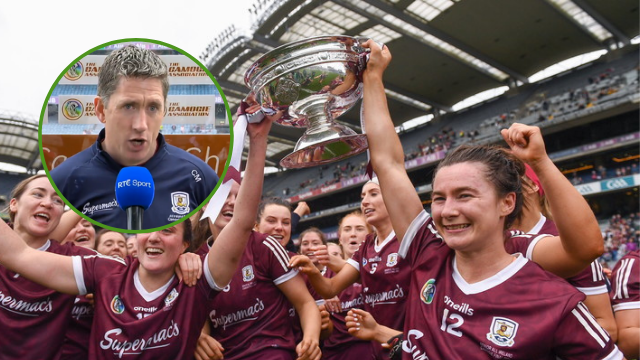 GAA
1 week ago
By Jonathan Byrne
"These Girls Are Heroes" Galway Camogie Celebrate All-Ireland Win
Popular on Balls
Football
18 hours ago
By Eoin Harrington
Watch: Caoimhín Kelleher Penalty Save Helps Liverpool Through To EFL Cup Fourth Round
Football
22 hours ago
By Jonathan Byrne
The Battle Of Old Trafford: Roy Keane On Why Arsenal 'Crossed That Line'
Football
23 hours ago
By Andrew Dempsey
Shay Given Reveals 'Horrendous' Contract Offer That Forced His Celtic Departure