Meath manager Eamonn Murray saluted the county’s ‘heroes for life’ after his team created a piece of history by lifting the Brendan Martin Cup at Croke Park.

The Royals were crowned TG4 All-Ireland Senior champions for the first time after a phenomenal win over the five-in-a-row chasing Dublin.

Emma Duggan’s goal was the difference in the end but it was the collective effort that held Dublin at bay, especially in the second half as the 2020 Intermediate champions stayed on track for a memorable win over their Leinster rivals.

“We need to forget about the bad days, those bad days are gone thank God,” said Murray.

“These are heroes and will be heroes for life if they never kick another ball. They’ll go down in history now. I never questioned for one minute that they wouldn’t win.

“They’re (Dublin) a class outfit, an unbelievable team. To be the best you have to beat the best and we certainly did that today. We were by far the best team today.

“We had the luck with us all year but it’s not luck when you beat all of these top teams. They are a very special bunch of players I’m dealing with here.

“They have come a long way, this is as high as it goes so where do we go from here?”

Meath were Lidl National Football League Division 3 champions in May 2019 and after the Covid-19 affected campaign that followed they won Division 2 earlier this year.

But no one expected them to win Intermediate and Senior Championships in successive years, a marvellous success for Murray’s side.

Meath built the foundations in the first half where they were 1-8 to 0-6 ahead at half-time. The highlight was Duggan’s remarkable lobbed goal in the seventh minute.

The 18-year-old full-forward spotted Dublin goalkeeper Ciara Trant off her line and sent the ball in over her head to establish an early 1-2 to 0-1 advantage.

The holders were rattled and Meath took a 1-4 to 0-4 lead into the first water break with Duggan’s first point giving them a five-point lead at the half-time interval.

Dublin finally came with their second half surge after Meath were 1-9 to 0-8 ahead entering the third quarter.

Kate Sullivan, Hannah Tyrrell and Lyndsey Davey looked to have turned the game in Dublin’s favour but Niamh O’Sullivan gave Meath a 1-11 to 0-11 lead with a great score.

Tyrrell landed her seventh point with two minutes remaining but the Dublin comeback was insufficient to reel in Meath as Mick Bohan and his players came out on the losing side.

“I look back to five years ago and on the back of three All-Ireland defeats, today was the end of a road for probably half a dozen of that group,” said Bohan.

“We’ve lost the game today, that’s what has happened. We’ve been lucky enough to be on the right side of it and experience the happy days so we’ll take this one on the chin.

“You are supposed to go out into that arena and your supposed to empty your souls on the pitch. That’s why we value it so highly.

“I hope the people that came today got the spectacle that they deserve and I certainly think it was a marvellous front for Ladies football.” 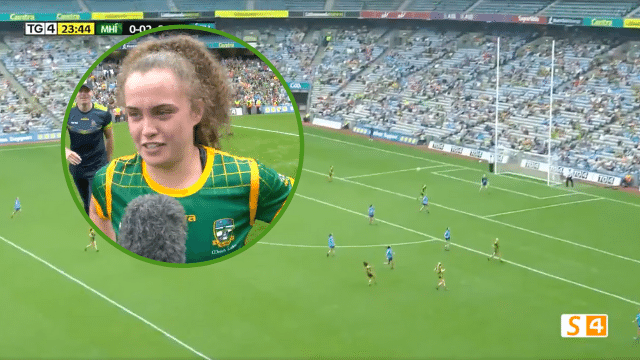 GAA
1 month ago
By PJ Browne
Vikki Wall Committed To Meath, But Not Ruling Out Future Move Down Under
GAA
10 months ago
By Anthony Newman
Cork Ease Past Galway Into All-Ireland Final With 10-Point Win
GAA
10 months ago
By Declan Rooney
Dublin Reach All-Ireland Final After Edging Armagh In Six-Goal Battle
Popular on Balls
Football
11 hours ago
By Eoin Harrington
John O'Shea Explains How He Ended Up In Goal For Manchester United In 2007
GAA
17 hours ago
By PJ Browne
Three Live Club Football And Hurling Games On TV This Weekend
GAA
12 hours ago
By PJ Browne
Incredible Penalty Halts Premature Celebrations In Galway
GAA
14 hours ago
By Maurice Brosnan
'Bad Coaching. I Think That Is A Big Problem In The GAA'