One of the first thoughts which crossed Michael Lundy's mind when he was told that he needed to have his appendix removed was a classmate in school - he missed a couple of weeks with the same ailment. That recovery schedule wouldn't do for Lundy, he had a Connacht final to play in ten days.

Keyhole surgery he was told. As someone unaccustomed to the operating table, the term meant little to him.

"Once I came out, it was quite sore, it was bruised and tender at the time and there were stitches in there. It was a Thursday morning I came out and I literally sat on the couch for a week."

After a sedate week spent watching TV, he needed to move. Lundy went for a run and got on the bike. He had been to see a physio earlier in the week who had told him that he shouldn't play. "But he was probably thinking of his own back, he wanted to cover himself, which was fair enough."

On the Friday, just two days before the Connacht final, he did a bit at the club's final training session before the decider against Castlebar Mitchels.

There was still some swelling but he badly wanted to play. Manager Kevin O'Brien told him that if he was going to play on Sunday, he would have to be able to do some drills at that Friday training session.

I did them and training went alright. He tested me again in the warm-up on the Sunday before the game. I got in and just got physical because I wanted to see how it would react.

I wasn't hiding away from it because if it was going to be sore there was no point in me playing because I'd only be harming the team's chances.

It would take extra time to separate the two sides in Tuam. Lundy lasted just over 60 minutes, scoring a crucial goal for Corofin.

He was marked in the game by an inquisitive Paddy Durcan.

"I actually remember Paddy Durcan was marking me and he must have got wind of it because he said it to me. I don't think he believed it, though. He was asking me, 'how's the appendix?'. I just said, 'fine'.

"But I don't know if he was being sincere or was he trying to find out. So I just said it was grand and that was the end of it. Yeah, no belts in it thankfully and I came out of it alive with a good win."

November was revenge for two years earlier when Castlebar had beaten Corofin by five points in the Connacht final. The day after that game, Lundy left for New York. 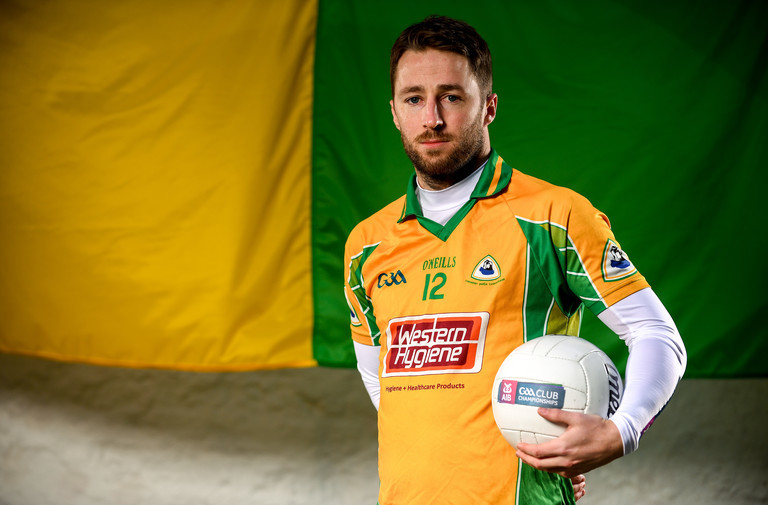 He spent ten months working in construction before returning home, initially for his grandmother's funeral and his sister's wedding. It was football which kept him in Galway.

"When I came home I started training and was just home initially for the funeral. I had intentions of going back and had still all my stuff left over there.

"I started training and then there was a county semi-final coming up and I asked Kevin could I get involved because I was still eligible to play.

"He was, like, 'yeah', so I came on in that. The county final was the weekend of my sister's wedding which was in Rome so I had to leave that wedding early to come home to play the county final.

"There was a run in Connacht so I just decided I was going to stay at home. Once we beat Castlebar I went over and just got the rest of my stuff from New York and just got rid of the room over there, stayed at home, and here I am still."

Corofin’s Michael Lundy is pictured ahead of the AIB GAA All-Ireland Senior Football Club Championship Semi-Final taking place at O’Connor Park on Saturday, 17th of February where the Galway club will face Kildare’s Moorefield. For exclusive content and behind the scenes action throughout the AIB GAA & Camogie Club Championships follow AIB GAA on Facebook, Twitter, Instagram and Snapchat and www.aib.ie/gaa. Photo by Sam Barnes/Sportsfile

See Also: 'We're Willing To Die For One Another, That'll Come Through On Saturday'

GAA
8 months ago
By Dylan Ryan
'I Don't Know What The Future Holds For Me, It Might Be My Last Time In Croke Park'
6

GAA
1 month ago
By PJ Browne
'It's Not All About Winning Underage. It's About Building Players And People'
GAA
8 months ago
By Dylan Ryan
'I Don't Know What The Future Holds For Me, It Might Be My Last Time In Croke Park'
GAA
8 months ago
By PJ Browne
'We've Nailed It Now And We Are The Greatest Club In History'
Popular on Balls
GAA
5 hours ago
By Gary Connaughton
O'Neills Have Just Dropped A Range Of Retro Inter-County Jerseys