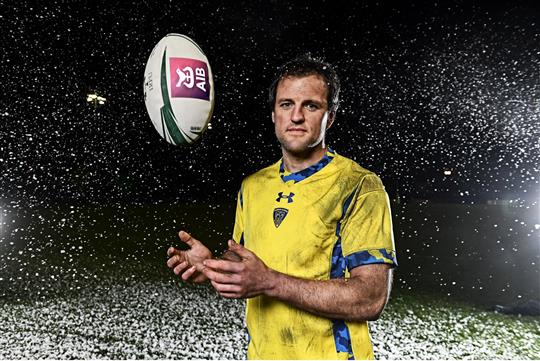 Michael Murphy had to pinch himself at times back in January. The Donegal man spent a week with Clermont Auvergne as part of the AIB documentary 'The Toughest Trade'.

Despite the proximity of the opportunity to Donegal's league campaign, Murphy had the full backing of Rory Gallagher. The Donegal manager was extremely positive about what Murphy saw as a once in a lifetime experience.

During training - where he played a mixture of wing and centre - Murphy found himself standing next to Clermont legend Aurelien Rougerie with the 76-cap French international giving him instructions about a play. Before he knew it, the ball was coming his way.

What struck Murphy more than anything else during his time with the Top 14 side was the humility which permeates the club. The Glenswilly man travelled to France with the assumption that professional sportsmen - not all of them, but some - take their privileged position for granted. That was a theory immediately proved wrong.

That was the one thing that surprised me. I had a preconceived idea going over there, this is probably not going to come across right, but with a professional environment, with all the different varieties and people earning money. Maybe sometimes they take things slightly for granted or maybe they just do their job, maybe they don't have as much passion, but straightway from the first day I went out there they were scrapped.

Players, it is not an act, they just love Clermont. They are mad for them to win, the same way we would be for Glenswilly or Donegal to do well. They are just hugely passionate, it is a lifestyle or social thing, they are extremely friendly as a whole bunch. They socialise together, they got out for dinners in the evening. That is a big thing that they do, not just as an act because they have to do it, they genuinely want to get to know players from all the different backgrounds. They have a huge respect for everybody.

Every morning the 100 people within there, they shake hands with each other. You don't dare not shake hands with someone. We'd like to pride ourselves in Gaelic Games about being really, really welcoming, to be off the one hymn sheet and same level, they're definitely at it over there. Which was great to see in a professional environment, which sometimes gets a lot of flak.

That was something I still think we could bring into Gaelic even more. That sense of togetherness, obviously in a professional set-up players are coming from a wide variety of cultures, a wide variety of backgrounds, it would be very easy for those to do their own thing and go away on tangents, but they come to Clermont, they get stuck into the Clermont culture.

Murphy is glad the chance came along when it did. He's uncertain it's an opportunity he would have taken up when he was younger, believing he would simply have 'gone into my shell, afraid it was too much.'

One of the aspects of being involved with a professional set up to which Murphy found it hard to adapt was the time off in between sessions. While Murphy was eager to move on to the next thing, his temporary teammates were having a nap.

Doing a training session, and I suppose twiddling your thumbs for a couple of hours. They just sleep for an hour and a half, two hours in a day. I was just buzzing from the earlier training session, dying to know when the next one was.

It just brought you back to when you came into the Donegal team, that kind of way. They're so in tune to their bodies. They know how to prepare themselves, to get themselves ready an hour before the training. Doing whatever strapping they need to do, whatever exercise they need to do and when they go to the training ground, they are ready to go.

Whereas back here, like with me now I'll be up the road, you get out of the car, everything is done within ten minutes, you get out on to the training ground and that was the big difference. It's cliched to say there's less recovery in Gaelic football but to actually experience it over there in a week, that was a big thing.

What Murphy was particularly interested in educating himself about heading into the week was tackling. He departed France with a real appreciation for what he now recognises as an extremely technical part of the game - it's not just 30 men hurling themselves at each other.

The breakdown was another facet of the game, though he still doesn't fully understand it, in which he was interested. Clermont forwards coach Jono Gibbes, who will be Ulster head coach next season, worked with Murphy on the breakdown.

The couple of things going out there that I wanted to throw myself into was the whole area around tackling and getting tackled and obviously the ruck and the breakdown. Watching rugby, these last few days, I still don't fully understand the breakdown. Jono Gibbes did a lot of work around that with me. He brought me through quite a bit of that, so that was brilliant. To see the game at the weekend [England vs Italy] and what was going on, that just added another layer of confusion. I was delighted to experience that.

It's crazy how technical the tackle is. How your body position and shape and your feet have to be right. You just think automatically in these games there's 15 coming on 15 and these boys are just flinging their bodies in the way. They're actually getting their bodies in certain positions, their backs, they shoulders, everything. If they don't, they're going to get run over. Trying to think of all that technique and get power and pace into your tackle was something difficult.

At the end of the week, Murphy was left wishing he could organise his life like a professional sportsman - one who didn't have to worry about obligations such as running his sports shop in Letterkenny.

I was thinking to myself how could I schedule this life for the next couple of years, just to go at it. That would be the dream, it always has been, I probably don't get it too badly in terms of being in the shop.

It was probably a bit heavier when I was in DCU in terms of the travel. Being at home, where I am, being able to nip out to the physio when you have an appointment or if you have to meet a trainer you can nip out the odd day. To do it every day would be the ultimate. I still think I have the right balance in Gaelic, to do what we do.

The Toughest Trade will return to RTÉ2 tomorrow (Wednesday 1st March) at 9.30pm. Created by the long-time GAA Club Championship sponsors AIB as part of its #TheToughest campaign, The Toughest Trade explores how professional sports compare to the amateur GAA games.