During a video call with the media this week, Dublin manager Mick Bohan frequently referred to his players by nicknames, like Goldie and Maccer.

It led to the thought that Bohan must be quite friendly with the panel, and so how does he handle the dynamic of being their friend and also the manager who sometimes has to make hard calls?

"I can tell you one thing, they wouldn’t tell you I’m their friend, that’s a fact," said Bohan in response.

"I don’t say that in any dismissive tone. Goldie (Sinead Goldrick) said to me two years ago, after the All-Ireland final, that there was no question in our camp that I treated anyone differently than the other because they still got it in the ear if it wasn’t what was being asked of them. They are not my friends and they don’t want me to be their friend.

"Do I mind them? To the best of my ability but I also tell them what’s what. I try to be as straight with one as the other.

"I’ve huge respect for them but those people - the likes of Maccer (Niamh McEvoy), Goldie, or Sinead Aherne - they are phenomenal leaders [and] people, they’ve earned that respect but no one ahead of the other." 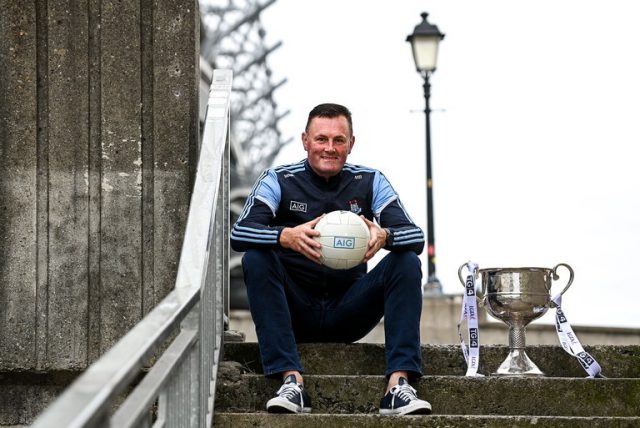 30 August 2021; Dublin manager Mick Bohan during an AIG-LGFA media event with Croke Park in the background. He is looking forward to welcoming 40,000 fans into Croke Park for Sunday's All-Ireland final. Photo by Ramsey Cardy/Sportsfile

On Sunday, Dublin aim to win their fifth consecutive All-Ireland Senior Ladies Football Championship. In a change from the usual adversaries of Cork, Galway and Mayo, this time Meath - in their first senior final - are the challengers.

Dublin have cruised to the final - beating Waterford and Tyrone in the group stage, Donegal in the quarter-finals, and Mayo in the semi-finals - despite the retirement of Noelle Healy, a key player in the four previous All-Ireland title wins.

The addition of former Irish rugby international Hannah Tyrrell to the panel has made the loss of Healy easier. Tyrrell, who was a goalkeeper for Dublin in 2013 and 2014 before switching codes, has been a revelation this year.

"A left-footer in the game with that natural swing has obviously brought a little bit of diversity to our game which we may not have had before," said Bohan.

"I've said this over the last couple of seasons, that probably the most enjoyable part for me is to watch the older girls pass on lessons to the younger girls.

"But then when you bring in somebody who's been involved in a professional/semi-professional basis and the learnings they bring from another game, their approach, their lifestyle... I'm not saying there's huge voids, but they bring that little bit extra.

"And our group have been massively receptive to learning anyway. So then to get somebody who's played at that level, and it is a different level, it's a higher level of training. It's a higher commitment, probably one of the reasons she finished up was because the commitment was huge.

"So to bring that into the camp to share those experiences which she's been really, really good at and the group have enjoyed listening to her, that obviously brings people on a notch.

"Now, equally, I have to hand it to the group, you have to be receptive to that and they have been. So, you know, we've enjoyed that experience. Even as coaches, picking her brains and different things because that's how we all get better. She's shared some good ideas with us which we've listened to." 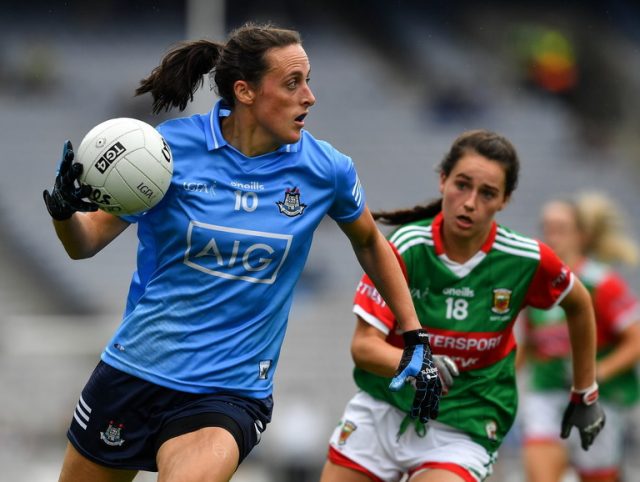 14 August 2021; Hannah Tyrrell of Dublin in action against Róisín Durkin of Mayo during the TG4 Ladies Football All-Ireland Championship semi-final at Croke Park in Dublin. Photo by Ray McManus/Sportsfile

To fuel their run of success, Bohan says the management team and players have had to "reinvent the wheel each year".

"You have to do something different, because no matter who you are, it can't become stale," he said.

"I certainly know that we want to play with a spirit of adventure and that’s the terminology we actually use. If we lost that, I’m not sure boredom would be the right word, but all of a sudden the game isn’t exciting anymore and if it isn’t and it’s your hobby, well then you don’t play with the same fervour.

"That’s been very much part of my mind-set over the five years. Jim (Gavin) did the same thing when I was there with the [Dublin] lads. He always mixed it up a little bit so that a spirit of adventure remained in the group.

"Maybe it comes from my background as a PE teacher that you are constantly look to see those skills performed in the arena but I also think it’s a really good way to go after the game. Since 2017 the scoreline hasn’t been our objective, even though it’s obviously part of the outcome. It’s been the quality with which we play.

"I thought the ’17 final [against Mayo] was exciting and ’18 [against Cork] was a very good final between ourselves and Cork. In 2019 [against Galway] it was a really big disappointment for the group, amazing to say. The atmosphere in the dressing-room afterwards was muted much and all as they were delighted to have won three-in-a-row.

"There’s probably that bit more pressure on girls as they know they only have one or two showcases in the year to demonstrate what they’re capable of doing. I still look back to our lads in that All-Ireland final in the rain against Kerry (2015) and it wasn’t hugely dissimilar but ultimately they have had many other days to show their capabilities but the girls didn’t.

"I think they feel an onus that this is their opportunity to show what they’re capable of doing. It does become a factor to see if we can play this game at the highest possible level.” 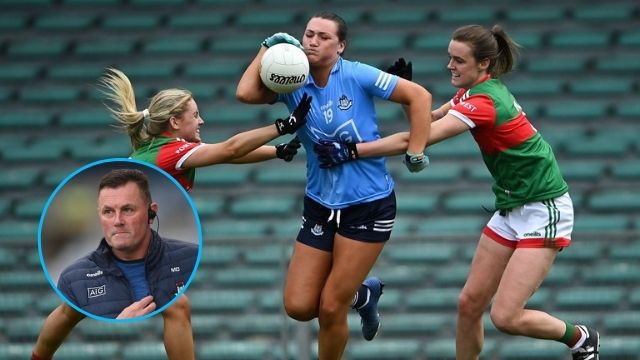