"Donie Ryan still believes the reason we didn't beat Kilkenny was because we didn't get the ball into him. He's never forgiven us."

A year that ultimately ended in disappointment for Limerick's hurlers, 2007 is scarcely remembered for the 2-19 to 1-15 defeat suffered at the hands of a rampant Kilkenny team.

Their second in a consecutive run of four All-Ireland wins, Limerick weren't the only team to come up short against Brian Cody's hurling juggernaut; Cork, Waterford and Tipperary would also have their share of final-day disappointment.

Perhaps things would have been different if Donie Ryan's instructions had been carried out to his satisfaction, and maybe, as Mike O'Brien remembers eleven years on, it was Limerick who desperately needed the quick start Kilkenny manufactured to have any chance. Either way, as O'Brien looks back at it now, it may simply have been a case of one team probably being "the best side to ever play hurling."

Consider Limerick's route to that year's final, and a confident performance against Clare in an All-Ireland quarter-final preempted a stunning 5-11 to 2-16 semi-final win against Waterford. Yet, even these games have faded into the background somewhat.

Forever more, 2007 will go down as the year that Limerick and Tipperary went toe-to-toe three weekends on the bounce. With a combined attendance of almost 100,000, and many more watching on their televisions at home, Dermot Crowe described how "the chaotic twists and astonishing comebacks [made] it a source of public fascination."

"Three matches that you didn't know what way they would go up until the last minute of the third game," O'Brien spoke to Balls about a battle "that took on a life of its own." 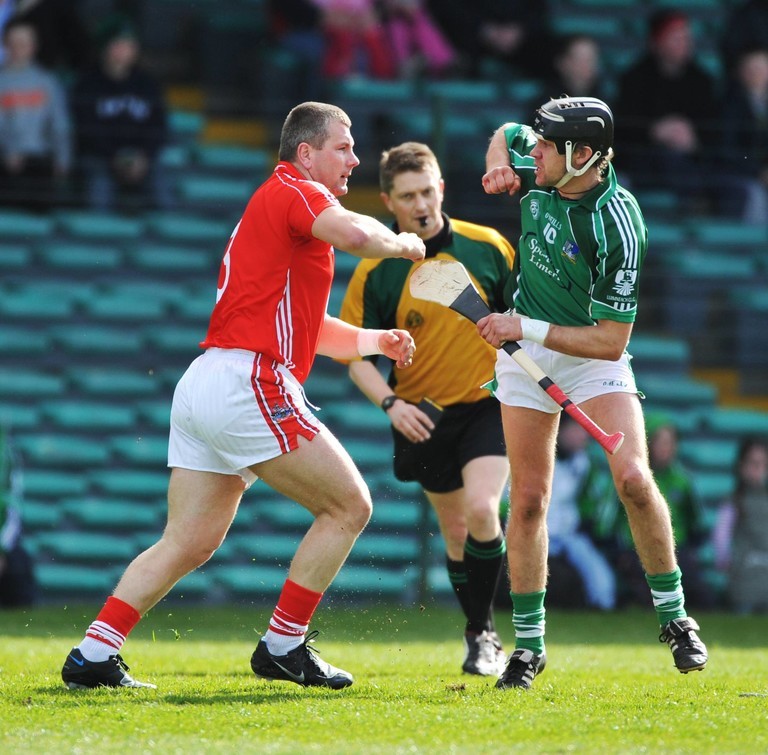 When Mike O'Brien joined the Limerick panel in the late-1990s, the general feeling that a wonderful generation of hurlers had ultimately just fallen short of their potential can't have been overlooked.

While Offaly, Clare and Wexford had put years of pain to rest by way of All-Ireland wins, 1973 still lingered as a high-point Limerick hurling couldn't quite recreate. Although in 2001 Limerick would overcome the reigning Munster champions Cork in a sensational provincial semi-final, Tipperary, and then Wexford, put to bed any hopes the county had of building on this momentum to its desired conclusion.

By the time 2007 rolled around, that memorable 1-16 to 1-15 win in Páirc Uí Chaoimh remained Limerick's last in the Munster championship. When Tipperary - still boasting a number of players from their 2001 All-Ireland win - arrived at the Gaelic Grounds in Limerick on 10 June, there was little reason to believe that this unwanted record was due a change.

Recalling the build up to the first of three savage battles, O'Brien illuminates the depths Limerick were prepared to go to in an effort to rewrite the script:

When I think back on 2007, I remember we played Tipp in the first round of the Championship in 2006. We had gotten to the League final that year and we were very confident, but, same day, they beat us, and beat us well.

To be honest with you, we just felt that we had played them in 2006 and on the day hadn't done ourselves justice - Eoin Kelly the same day got something like 13 or 14 points.

Although we didn't fear Tipperary, we trained really hard between the end of the League [in 2007] and the first round of the Championship. We really, really trained hard, we were ready for the day.

2007 also brought with it a change of management; one hero of '73 Joe McKenna made way for another, Richie Bennis. The scorer of 10 points when Limerick overcame Kilkenny thirty-four years previously, there wasn't a better man to be in charge amid the madness that would ensue:

I was a really big fan of Richie. I felt he was honest like. Richie got the best out of players with his honesty. He was Limerick man, and when Limerick were beaten it really hurt him. Richie wouldn't go to the Cuchulainn on a Sunday night for his few pints if Limerick were beaten; it really hurt him to the bone. I think players really respected that honesty and at the end of the day.

A manager "who would ring you up during the day" for a quick chat, Bennis instilled in his players the same kind of honesty and endeavour that would see them come out the other end still intact, and ready for more. 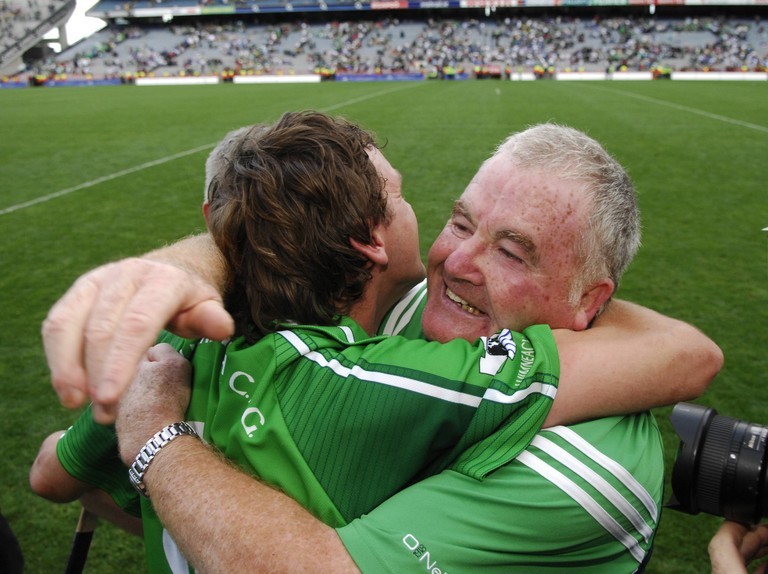 A warm day in Limerick when the hosts started well, Damien Reale's sending off after a little more than 20 minutes could have put this tie to bed before it even got started. Captain of the side, Reale's departure left O'Brien concerned; "God, this wasn't in the plan."

Yet, only two points off Tipperary at the break, grit, determination and a late goal from substitute Pat Tobin gave Limerick the break they needed. A week later though, when Limerick made the trip to Thurles for the replay, O'Brien quickly realised that this Tipperary team had let the lead slip once, and didn't intend to do so again:

Of the replay in Thurles, what really sticks out in my mind was the first 10 or 15 minutes.

We played on a Saturday night over in Thurles and I just remember the pace Tipperary started with, and we just couldn't live with them you know?

10 points behind at half-time, the qualifiers almost certainly beckoned - again.

Without an All-Ireland title to their name in 34 years, and their last Munster title coming in 1996, this wasn't necessarily a team you would expect contained the resolve to do what did they did across the next 38 or so minutes of play.

Trying to explain it now, O'Brien points to "the day of the championship; strange things can happen." Although "9 or 10 points seems a lot ... if a team get a run on you, either way, whether you're 10 points up or 10 points down, you can get a bit of momentum behind you."

Crucial for O'Brian that day also were the Limerick supporters; "I feel with Limerick, it is a big thing if you can get the crowd going, because they are definitely worth a few scores."

Taken off before the extra-time in the first replay, O'Brien would resume first-team duties a week later. Back to the Gaelic Grounds again, the venue may have changed, but the story of the game remained the same.

Point for point, any extended lead had tended to go the way of Tipperary. However, in this third fixture, it was Limerick who had opened up what at one stage became a 6-point lead - it wouldn't last.

Reeled in by half-time, normal service resumed. Such efforts didn't come without consequence however, and, as the sides slipped dutifully into extra-time once again, the effects of so much physical effort took their toll:

I remember in the third game in the Gaelic Grounds, I got a ball in front of the Mackey stand.

I had it caught twice, I turned around, there were Tipp fellas everywhere, and my legs were so weak I just drove the ball forty yards straight across the goal, and, Seamus Hickey came onto it ... I think Darragh Egan actually came onto it, and Seamus Hickey dispossessed him, and, to be honest with you, I was thanking my lucky stars he did.

With every score leaving a significant imprint on the game, it was "a master-stroke by Richie Bennis" that eventually saw Limerick over the line.

Failing to register a point in the second-period of extra-time, Tipperary struggled to keep Limerick out at the other end. With Brian Begley wreaking havoc among the Tipp back-line, Bennis' decision to put Ollie Moran just in front of him paid huge dividends.

Hitting 13 points from play across the three games, it was O'Brien who instigated the final - and most crucial - of these scores. With what may be described as a wonderful pass (or hopeful hit forward), Barry Foley got on to the end of O'Brien's ball.

Working tirelessly to find the angle, Foley played in Moran who, with maybe his most straight-forward of the 13 points scored, gave Limerick a 2-point cushion.

When his brother Niall scored another only moments later from just inside his own half of the field, that was that - or so the Limerick fans thought. The ensuing rushing of the pitch from thousands of joyous Limerick supporters was premature; but wouldn't be in vain.

As Sean McMahon finally blew his whistle a few moments after, Marty Morrissey captured the essence of what we were witnessing; "The emotions are pouring out of every Limerick person." Having come under criticism for not capitalising on underage success at the start of the decade, against Tipperary, Limerick hurling "came of age." 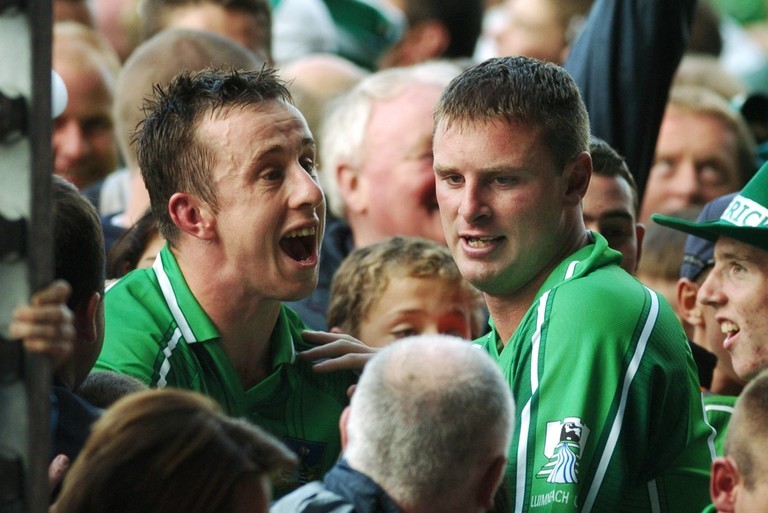 For O'Brien, and many more besides, these were the days he had dreamed of:

When you're 10 or 11 years of age and you're going down the field at home among the cows with a hurley and ball, you dream about playing in a Munster final or All-Ireland final, and, you know, we've had great memories and great days.

Although this might not have been a final, it may as well have been. While he played in every big game a young hurler could dream of, and rarely came out of them with the right result, the Glenroe man wouldn't change a thing all:

If someone told me when I was 10 or 11 years old that I'd get to play in all the big games, play in an All-Ireland final, a Munster final, 10 or 11 years playing with your county, I would have taken it you know?

Not that he doesn't wish he was "23, 24 again and lining up behind the band next Sunday" all the same.

Of this current Limerick team, O'Brien sees an awful lot to be positive about going forward. Urging patience for both the players and management, the winning mentality taken from underage success will leave them fearing nobody.

Divided over the structural changes that will leave a three-in-a-row the like of which Limerick and Tipperary contested 11 years ago all but impossible, he believes "it will suit this Limerick team. They'll have good matches every Sunday, which for a young team, is going to benefit them."

Reduced to sitting amongst the spectators this afternoon in the Gaelic Grounds as Limerick set off on another Munster odyssey, O'Brien only looks back on what has been with great fondness:

I'm delighted I got to play for my county, you know? I got to play in big games, and, even though we lost a lot of them, I still look back and have great memories, made great friends, and to be honest, I wouldn't change a minute of it.