Mountbellew had beaten three-in-a-row All-Ireland champions Corofin in the semi-finals but fell 2-12 to 1-11 against Moycullen.

Captain Dessie Conneely scored 1-9 for Moycullen with 1-3 coming from play.

"For the parish, this is incredible.

"You look at Corofin the last few years, what they've done has been incredible, the amount of effort they've put in to win counties, Connachts and All-Irelands, they are an absolute credit to Galway football.

"It gave ourselves and Mountbellew today an opportunity to be a new champion.

"The effort that's gone in all year, it's something that we deserve. At the start of the year, we set out to win [the] Frank Fox [Cup]. We've done it today and it's unbelievable."

Moycullen bring the Frank Fox Cup to West Galway for the first time since 1996!

The two sides went in level at half-time with 0-7 each on the scoreboard. Mountbellew appeared to have the upper hand with the Salthill wind behind them in the second half.

However, Moycullen's two goals - the first coming three minutes after the break from Conneely and the second midway through the half from Conor Bohan - proved crucial.

"Any day you go out in a county final, you want to play well," said Conneely.

"Things just seemed to happen today. It could have been anyone on the pitch. We have a massive squad with huge talent. I might have got the scores today but all year it's been lads who have stepped in when we've been close in games.

"Going in at half-time, there was a big breeze there and we felt that we might have been in a bit of trouble but there's confidence among the squad, we've been in tight situations all year. Goals are something that we've brought to our game this year. We knew there were goals in us and the two of them at the end were probably the difference." 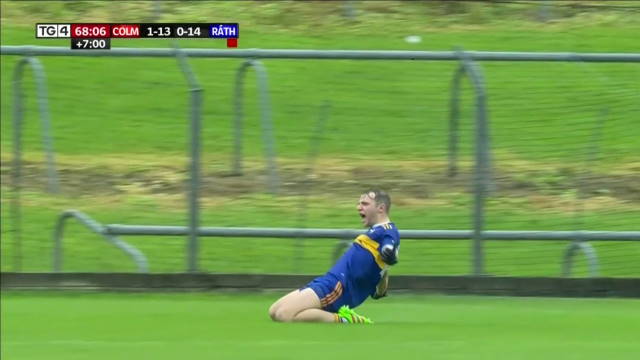