Grandfather, Father And Son Line Out For Moycullen In Hurling Championship

GAA clubs can really knock it out of the park sometimes, and this story coming out of Moycullen is right up there with the best.

Eoghan Cormican from the Irish Examiner explains the lineage of the Darcy family representing the home outfit, Moycullen, only 10km or so from the heart of Galway City.

Then with less than 10 minutes to go in the game, Moycullen make a substitution to bring a third generation of Darcy family onto the field. Another Morgan.

This time it's the turn of 74-year-old Morgan Darcy, whom the middle Morgan explained to the Irish Examiner that he didn't fully believe his eyes seeing him come on during the game.

"He was going to bring his gear in case the chance arose," 49-year-old Morgan said. "When I saw him coming on, I thought somebody left the backdoor of the nursing home open!"

It was history in the making for Morgan Snr to grace the field, but the middle Morgan said they had been keen to see if they could pull it off.

"Thirty years ago, dad and I would have played junior championship together for Moycullen ... I said if the chance ever came, I’d love to play on the same team as my own son."

49-year-old Morgan told the Irish Examiner, "My father has been involved in the Junior C the last couple of years as a selector. When he saw the opportunity, he said he’d love to step on the field and be there with us."

It wasn't all fun and games for Moycullen as Salthill Knocknacarra came out on top by a two point margin. Nonetheless, the memories will live on from this game for the Darcy's and beyond.

What's the secrets to success for a 74-year-old to still be flying fit and contribute to a Junior C Championship game? Less of the pints, more of the tea.

"He is not a man for the pub like me. He prefers his cup of tea," the middle Morgan told the Irish Examiner. 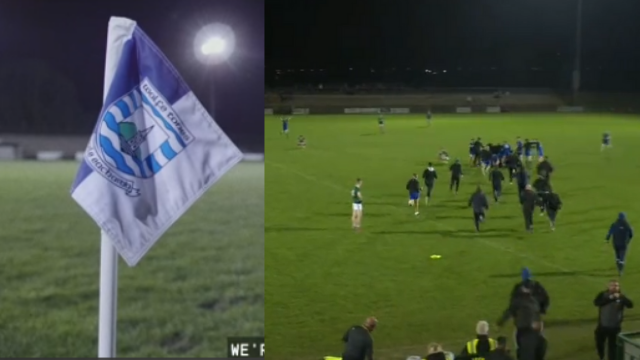