23 Years Ago, The NFL Invaded Croke Park On A Sunday Evening

"Today, America's favourite sport begins anew by travelling to a country as beautiful as the sport itself," began the Fox Sports broadcast.

Shots of people dancing, the Dart, a sign for Dublinia, a rolling hill and river, the Ha'penny Bridge and a deserted Grafton Street followed before the voiceover told us: "Yes, indeed, football's new season starts in Ireland".

On July 27th, 1997, the Chicago Bears took on the Pittsburgh Steelers in a pre-season game at Croke Park. Titled 'The American Bowl', it remains the only NFL game to be played in Ireland. It was part of a series of NFL fixtures which were played in locations around the world between 1986 and 2007. Mexico City and Toronto also hosted games that year.

That it was those two teams which played owed to the Irish roots of their owners. Dan Rooney - whom 12 years later would be appointed US ambassador to Ireland by Barrack Obama - owned the Steelers. Mike McCaskey was the man running the Bears. Talk of a game at Croke Park had begun eight years previous when Dan Rooney's brother Tim had a word with GAA director general Liam Mulvihill.

The game was announced at a New Orleans press conference in the build-up to the Super Bowl between the Green Bay Packers and New England Patriots earlier that year.

Rooney told the assembled press how special it would be for his team to play at Croke Park. One Pittsburgh journalist wanted to know what Rooney meant by calling the stadium "hallowed ground".

"Have you seen Michael Collins, the movie?" responded Rooney, as reported at the time by Michael Dungan for the Evening Herald.

"No," the journalist replied.

"Well," laughed Rooney, referring to the film's depiction of Bloody Sunday, "You should go see it".

At the time, the NFL was six years into its World League of American Football experiment, what would later become known as NFL Europe. There were six teams in the 1997 season and speculation was that Dublin - with a team based at Croke Park or Lansdowne Road - could become part of further expansion.

It hasn't gone further than us saying to Croke Park and Lansdowne Road, 'Would you guys be interested in talking about that?' And both guys saying, 'Yes, we'd like to talk about that'. That's as far as it's gone.

Rooney was very much against the idea of a team being based in Ireland, saying that "you have your own games: hurling, which is a tremendous sport, and - from other traditions - rugby and soccer. I wouldn't want to see a World League franchise interfering with Ireland's own games".

The Bears, Steelers, and their industrial levels of personnel and equipment, arrived on the Tuesday before the game and trained against each other at UCD.

Not all arrivals were welcomed - or felt welcome - in Dublin. Dennis Roddy wrote for the Pittsburgh Post-Gazette that when Orpheus Roye, Oliver Gibson and Levon Kirkland - three black Steelers players - were allowed by fans to skip the Dublin Airport taxi rank queue, "Dublin kids in the back of the line were outraged. They hurled insults, racial epithets and, as the last batch of Americans left, street rubbish". 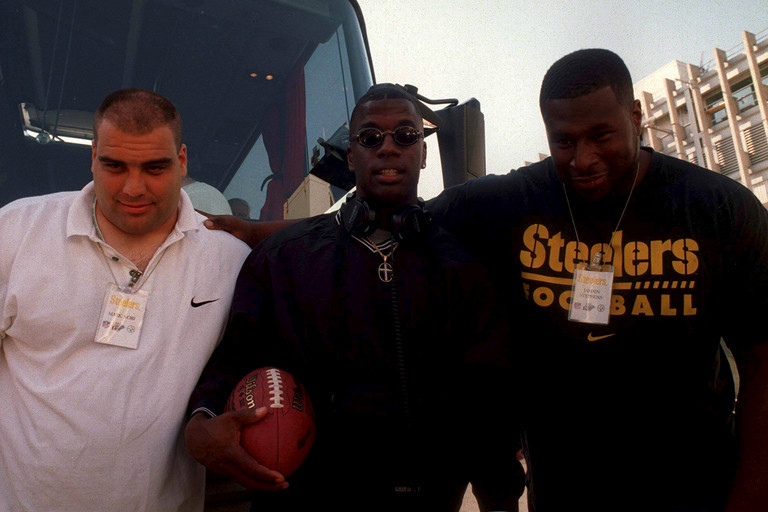 A day into his time in Ireland and Steelers linebacker Greg Lloyd already had enough. He thought the people were rude - understandable and an understatement if he encountered those queuing at Dublin Airport - that the food was bad, the taxi drivers overcharged and the room service was unreliable.

"If you have met anybody in Dublin and talked to them, then you would know that they're a bunch of rude people," he told Pittsburgh news channel WTAE-TV.

"You do everything but try not to go to jail here, that's all you can do because they are rude people. I've come to find that out the first day we got here. So, you deal with it. It's just mannerisms. You ask for something and people act like you asked for the world.

"It's nice to go and travel but the food is awful. Call us spoiled, whatever. You just don't like the food that you eat. I don't know what they do to it, but you deal with it.

"You get in a cab and you see the fare and the people turn around and say something else. And you look at them and go, 'Well, what am I supposed to do? It says that, that's what I'm going to pay you'. You never get that in America. I mean that's what it says, that's what you pay.

The NFL executives became enamoured with hurling and Gaelic football. After watching Kildare and Meath draw their Leinster semi-final replay, both panels were invited to the following week's game.

The flow of love in the opposite direction was not universal. Offaly had won their Leinster semi-final against Louth on June 29th and would have to wait seven weeks before they played the final against Meath, who eventually defeated Kildare after a second replay.

Offaly manager Tommy Lyons contended that preparations for the NFL game at Croke Park prevented that second replay from taking place on the Saturday before America invaded Drumcondra. It was an assertion the GAA denied; the Leinster Council simply felt that the players could not be asked to take to the field six days after the drawn replay.

The game was Fox Sports' first broadcast outside of North America. Rupert Murdoch reportedly paid $1 million for the rights.

In the build-up, host Jim Brown welcomed future NFL Hall of Famer Howie Long back to his "homeland". "As an Irish Catholic from Charlestown, Massachusetts," said Long, "the Mullins are proud that I'm here. We're from the county of Dungiven. It's a special week."

The NFL felt it had to bring all its razzmatazz, even some the Bears and Steelers did not believe necessary. Neither team employed cheerleaders, so they had to be brought in from the London Monarchs and Scottish Claymores WLAF teams.

A giant TV screen was installed, as were temporary floodlights to accommodate the 6pm US TV-friendly kick-off time. The goalposts were brought in from Scotland, the scoreboard from England and The Corrs were flown in from Los Angeles to play the half-time show. Pre-game, the US army's Golden Knights parachute team dropped into the stadium with the match ball. 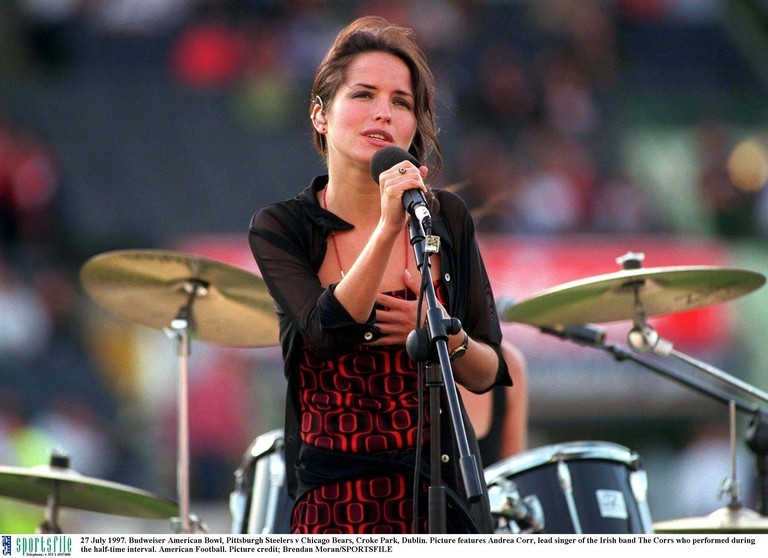 Both teams arrived with the hope which a new starting quarterback brings.

Kordell Stewart, who had been drafted by the Steelers two years earlier, got his chance and would keep the job for the next five seasons. That year, he led his side all the way to the AFC Championship game where they lost to eventual Super Bowl winners Denver Broncos.

Rick Mirer's time as Bears quarterback didn't even last that season. The team had traded for him in early 1997. After starting just three games, he was gone by 1998.

"I was kicking them fine all morning, but all the noise got to me!" he said.

"I came here with nothing and I still get a free trip to the Super Bowl next year so that's not bad!"

Some, like Joe Daly, had turned up because they got a free ticket. Others paid somewhere between £5 and £35.

All those distractions failed to sufficiently distract Phibsboro man Daly. "It's boring!" he told Cliona Foley in the Irish Independent.

"All the stoppages, they just don't allow any atmosphere to build up. If the Americans saw any of our sports, like soccer or Gaelic, they'd have heart attacks because ours are far more exciting."

15 year later, Dan Rooney - still the Steelers owner and then the US ambassador to Ireland - raised the possibility that a regular season game could be played in Dublin. Rooney died in 2017 without that game materialising.

Neither did that Irish NFL Europe franchise become more than talk. Some kid from Dublin, Ohio, never did get his chance to become the darling of the Hill.